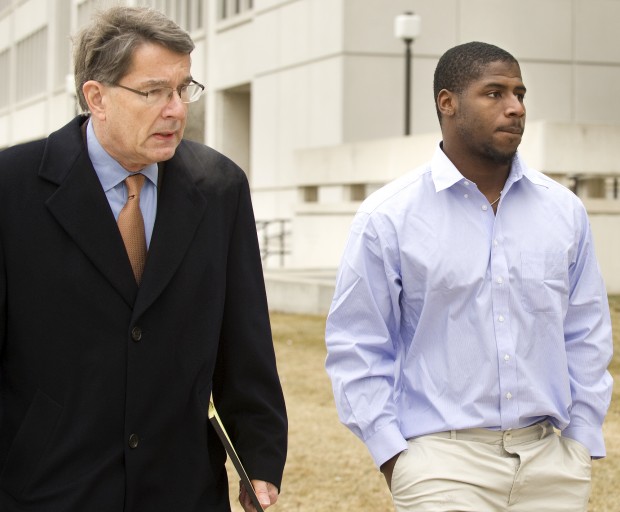 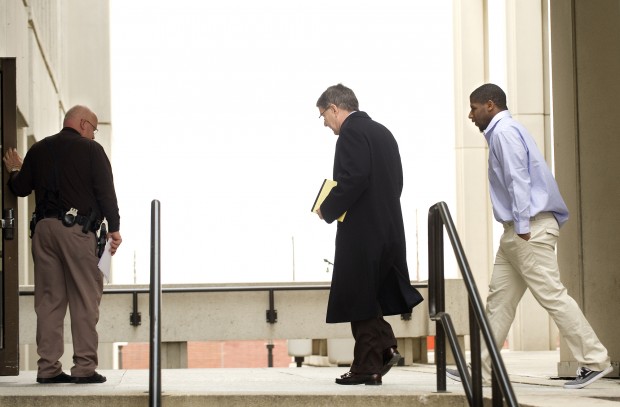 Alfonzo Dennard (right) and attorney Terry Dougherty (center) head to the probation office from the Lancaster County Courthouse on Wednesday, Feb. 20, 2013, after receiving a guilty verdict for assaulting an officer and resisting arrest.

Former Husker Alfonzo Dennard leaned over, his hands on the counsel table, before the bailiff read the verdict:

Guilty of assaulting an officer and resisting arrest April 21.

Not guilty of assaulting a college student, a stranger he collided with in the street that night as the downtown bars closed.

Dennard, a cornerback for the New England Patriots, showed no reaction.

"Obviously we're disappointed with the verdict on the first count," his attorney, Terry Dougherty, said outside the courtroom soon after with Dennard at his side.

At trial, he had conceded Dennard resisted arrest.

After the verdict that came late Wednesday morning, he said their work isn't done. They need to prepare for Dennard's April 11 sentencing, at which the 23-year-old faces a maximum of six years in prison.

Probation may be the more likely outcome.

"I think the judge will be doing the same here as they do with anyone else," he said.

Kelly said he doubts his office will make a specific recommendation, other than to make sure Dennard gets a sentence that accounts for everything that occurred.

At trial, the state said Dennard collided with Ben Samani, a student at the University of Nebraska-Lincoln, as bar-goers spilled out onto the sidewalks near 14th and O streets. Samani said Dennard punched him in the chest, but it didn't injure him.

Lincoln Officer Ben Kopsa said he went to arrest Dennard after he saw him punch Samani in the face. (Samani said someone else did that.)

Dennard said he didn't know Kopsa was an officer when he came up from behind and Dennard threw his elbow to try to get away.

He admitted that when he turned around and saw the officer he resisted when Kopsa said he was under arrest, backing away and swatting at Kopsa's hands when he grabbed at Dennard's arm.

Kopsa said Dennard threw a hook that hit his jaw as he tried to put on the handcuffs.

Both sides pointed to a 17-second video to back up their claims.

After the verdict, Kelly said he thought the video really helped, especially considering the fact that many of the witnesses had been drinking that night.

"A case like this usually can serve to highlight what the police face down there very often," he said.

Kelly said there were 142 or so assaults in that one-block area last year.

He hopes the Dennard case sends a message that it's not OK to assault officers.

The verdict came after a weeklong trial in Lincoln. Jurors deliberated about six hours.

Florio speculated that Dennard and the players’ union likely would challenge any attempt by the league to discipline him.

Twelve days before punching a cop in 2012, Alfonzo Dennard talked about his prospects and what mattered in his life.

Alfonzo Dennard is in jail in Lincoln after violating the terms of his probation for a third time, according to court records.

Pelini not called to stand as sides rest in Dennard trial

From the witness stand, Alfonzo Dennard showed the jury Friday how he twisted around at bar close April 21 when someone came from behind and g…

If Alfonzo Dennard's trial plays out the way attorneys said it would in opening statements, jurors will hear two significantly different sides…

Alfonzo Dennard (right) and attorney Terry Dougherty (center) head to the probation office from the Lancaster County Courthouse on Wednesday, Feb. 20, 2013, after receiving a guilty verdict for assaulting an officer and resisting arrest. 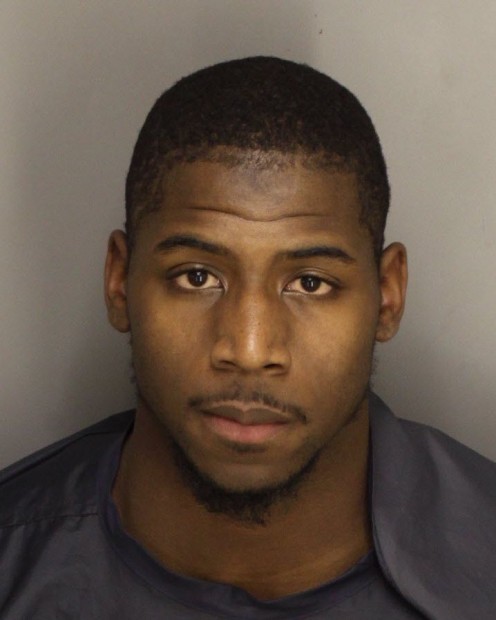