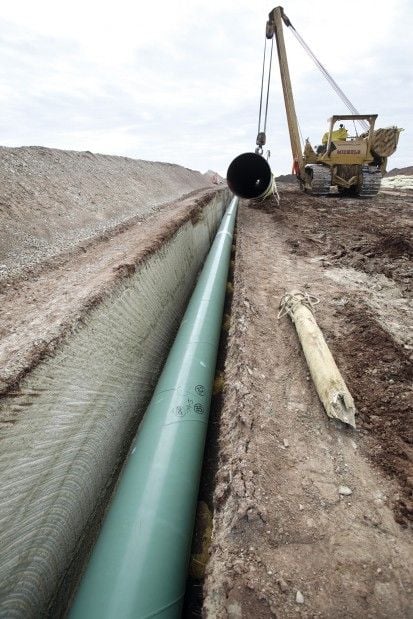 Once approved, officials say TransCanada would need two years to get the Keystone XL built. 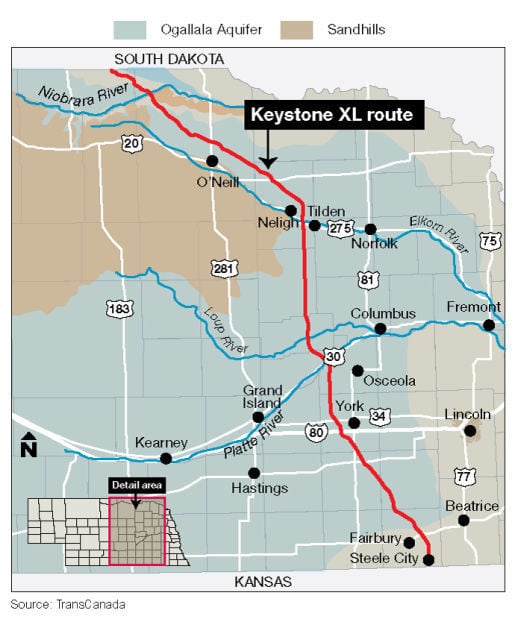 The Keystone XL pipeline has a valid route through Nebraska.

The state Supreme Court on Friday cleared a clog in the path of the proposed crude oil pipeline, reversing a lower court decision that struck down the law that former Gov. Dave Heineman used to approve the project's route.

The high court said the landowners who brought the lawsuit, represented by Omaha attorney Dave Domina, failed to convince a supermajority of the court they have standing to challenge the law -- allowing it to stand by default.

Nebraska law requires a supermajority -- five judges in this case -- to strike down legislation as unconstitutional.

Siding with the three landowners, Stacy had ruled last year that the 2012 law improperly bypassed the authority of the Nebraska Public Service Commission by allowing the governor to approve the Keystone XL route and give TransCanada the power to use eminent domain.

Stacy ruled only the commission or the Legislature has the power to regulate oil pipelines.

Former Nebraska Attorney General Jon Bruning’s office appealed the lower court’s decision and the state became the center of attention when the U.S. State Department halted the pipeline's federal permitting process until the issues in Nebraska could be sorted out.

The Supreme Court decision Friday clears the way for the U.S. State Department to restart its public interest determination process for the presidential permit that TransCanada needs to build across the United States' northern border. State Department officials in April paused a 90-day comment period for federal agencies saying it couldn’t proceed until the issues in Nebraska were resolved.

Once the comment period is completed, the State Department must issue a national interest memo, then President Barack Obama must decide whether to grant TransCanada a permit. Obama has pledged to veto any attempts by the U.S. Congress to circumvent that process and rush through approval.

An earlier phase of the Keystone XL project, extending from Steele City to an oil hub and tank facility at Cushing, Oklahoma, went online in February 2011. From there the pipes connect with terminals in Texas that supply refineries near Port Arthur, Texas, on the Gulf Coast.

TransCanada first applied for a presidential permit to build the northern segment of Keystone XL more than six years ago, on Sept. 19, 2008. Delays have caused the project's price tag to balloon from $5.4 billion to $8 billion.

In laying out the four-judge majority’s opinion, Judge William M. Connolly wrote that previous Supreme Court rulings allow for matters of great public interest to be challenged by taxpayers and denying standing in this case could slam the courthouse doors on future taxpayer actions raised on issues of great public concern.

The majority opinion went on to agree with the lower court in saying the legislation violated the state constitution by transferring the Public Service Commission’s power over common carriers to the governor.

“Unless the Legislature enacts legislation to specifically restrict the PSC’s authority and retains control over that class of common carriers, it cannot constitutionally deprive the PSC of its regulatory powers,” Connolly said in the ruling.

"We believe that Nebraska citizens deserve a decision on the merits."

Connolly was joined by Judges Lindsey Miller-Lerman, Michael McCormack and Francie Riedmann in the opinion.

The minority opinion, which did not address the issue of constitutionality, said those who challenge laws need more than “a tax receipt and a cause;” and the landowners did not meet exceptions to the traditional standing, which requires the plaintiff to have suffered direct harm.

Because they believe the court lacks jurisdiction to rule on the merits of the case, Chief Justice Mike Heavican, with Judges William Cassel and Kenneth Stephan, declined to opine on the constitutionality of the law saying it "would be judicially irresponsible and cast grave doubt upon the constitutional validity of the decision."

Pipeline opponents are considering their next steps.

“Obviously we have a bloody nose this morning, but we’re not down for the count. We will continue to stand up and fight this risky route,” said Jane Kleeb, who heads Bold Nebraska.

The three landowners -- Randy Thompson, Susan Luebbe and Susan Dunavan -- argued they had standing as taxpayers, which the minority judges rejected. But other landowners along the route who are facing eminent domain could file another lawsuit and meet the criteria for standing, he said.

In response to the ruling, Domina pointed out that every judge who has ruled on the merits of the law itself has found it unconstitutional. He said that the legal battle is far from over.

“The three judges who refused to pronounce their decision on constitutional validity ... they consciously chose not to say the statute is valid. That is a strong indication they're not in agreement on that,” Domina said.

TransCanada’s Nebraska gubernatorial permit gives the company until Jan. 22 to begin eminent domain proceedings, which could force easements for construction and set compensation for landowners who refuse to sign contracts voluntarily. The company has procured about 84 percent of the right of way it needs in the state.

Landowners refusing to sign easement agreements along the Keystone XL route plan to meet to discuss the condemnation process and develop a strategy next week, Kleeb said.

A nonprofit formed to help landowners in negotiations, the Nebraska Easement Action Team says more than 115 of its members continue to refuse to sign Keystone XL easements. The group has called for contractual provisions giving landowners greater control and protection, including requiring the pipeline be removed once it has outlived its useful life.

TransCanda President and CEO Russ Girling said he was pleased with the Supreme Court decision, adding the company plans to move forward.

“Our last resort is always the eminent domain process. It’s not a place we want to go,” Girling said. “In the coming weeks that will be something we will have to move on in certain cases. But our strongest desire is to work out as many of those situations in advance as we can.”

The Keystone XL project has become a cause célèbre on both sides of the political aisle, pitting environmentalists and property rights advocates against the petroleum industry, as well as labor and industry groups eager for the jobs the project would create during construction.

TransCanada already has spent more than $2.4 billion on Keystone XL, and Girling said it has contracts in place to fill all of the proposed pipeline's 830,000-barrel-a-day capacity and more oil producers are lined up to fill the space if others back out.

He added that today's low oil prices make the need for efficient transportation all the more important for producers. Pipelines, he said, are much more cost effective than rail.

Once approved, Girling said TransCanada would need two years to get the Keystone XL built. The company already has enough pipe in storage for the first 18 months of construction.

"Today’s decision by the Nebraska Supreme Court clears the way for approval of the construction of the Keystone XL pipeline," Gov. Pete Ricketts said in a statement. "It has been demonstrated that it will be the safest pipeline ever built and that it will bring good-paying jobs and property tax revenue to Nebraska’s counties."

“There are now no legal hindrances in Nebraska and the ultimate future of the pipeline lies squarely in the hands of the President,” Office of the Attorney General spokeswoman Suzanne Gage said.

While TransCanada now has a bearing and a course forward in Nebraska, it faces a hurdle in South Dakota. The company’s permit to build 313 miles of pipeline there, which was issued in 2010, has to be re-certified because construction failed to start within four years of the permit being issued.

TransCanada has asked for the permit to be renewed and the South Dakota Public Utility Commission will hold evidentiary hearings in May.

Gov. Pete Ricketts said Monday it's time to proceed with construction of the proposed Keystone XL pipeline now that the pending legal challeng…

The U.S. State Department on Friday pushed the play button on its review of the Keystone XL pipeline project, even as Nebraska landowners in t…

The EPA has fired shots at one of the underpinning arguments for building the Keystone XL pipeline: that the project would not significantly w…

President Barack Obama's veto of the Keystone XL pipeline hit the floor of the U.S. Senate at mid-afternoon Tuesday.

In a contentious 4-3 decision, the Nebraska Supreme Court reversed a lower court’s ruling that struck down the state law used to approve the K…

LINCOLN — Congress suddenly is scrambling to vote on the Keystone XL oil pipeline, but the fate of the oft-delayed $5.4 billion project could …

Once approved, officials say TransCanada would need two years to get the Keystone XL built. 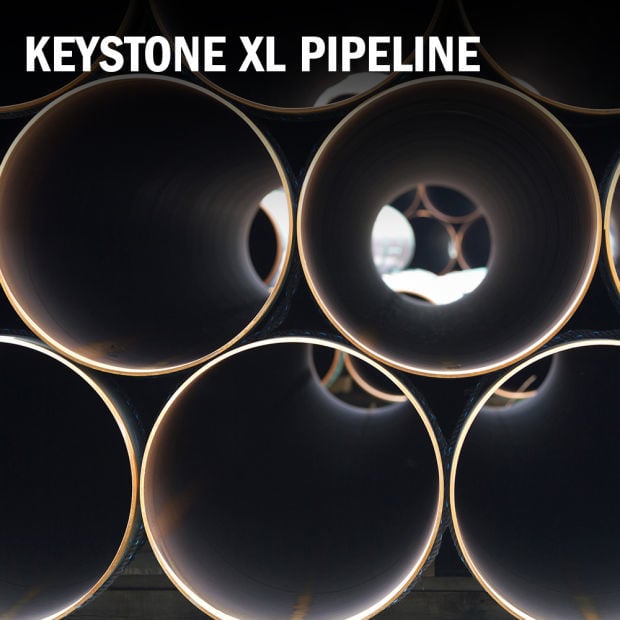