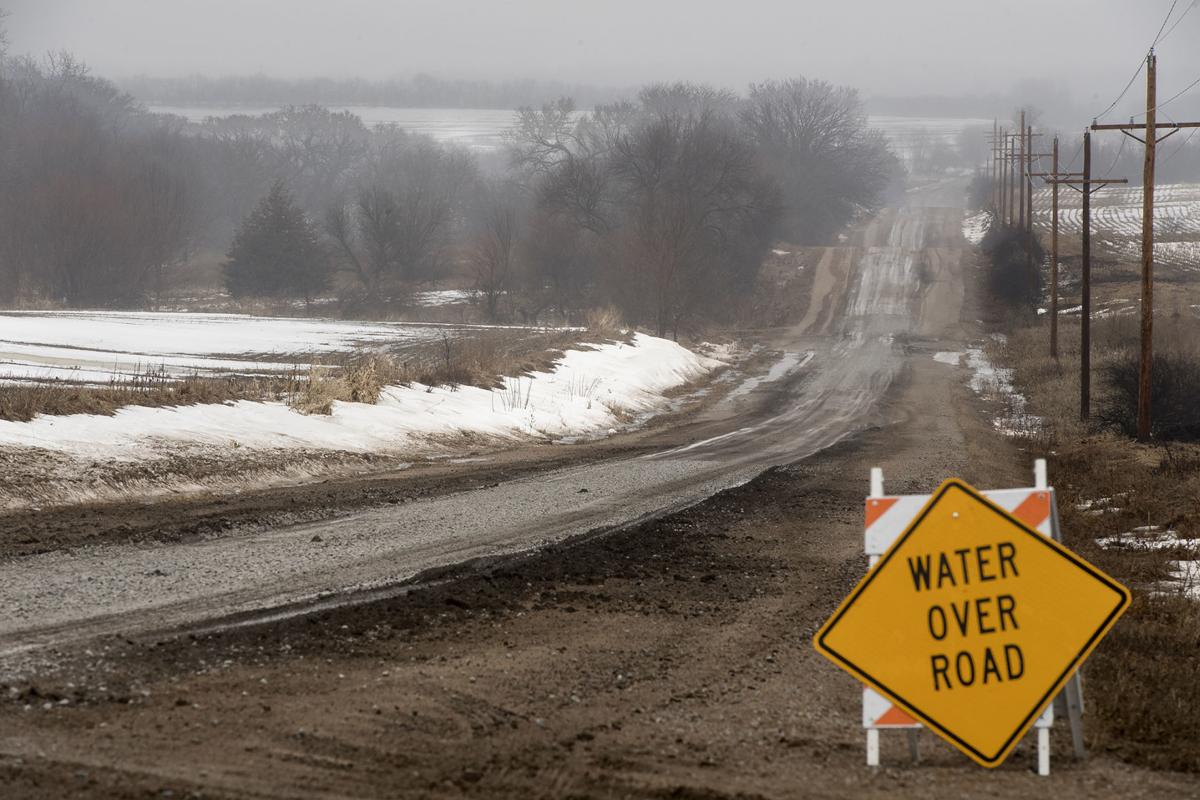 A sign warns drivers of road conditions on Southwest 42nd Street heading north of Panama Road on Tuesday. Officials say this could be a common sight across eastern Nebraska the next few days. 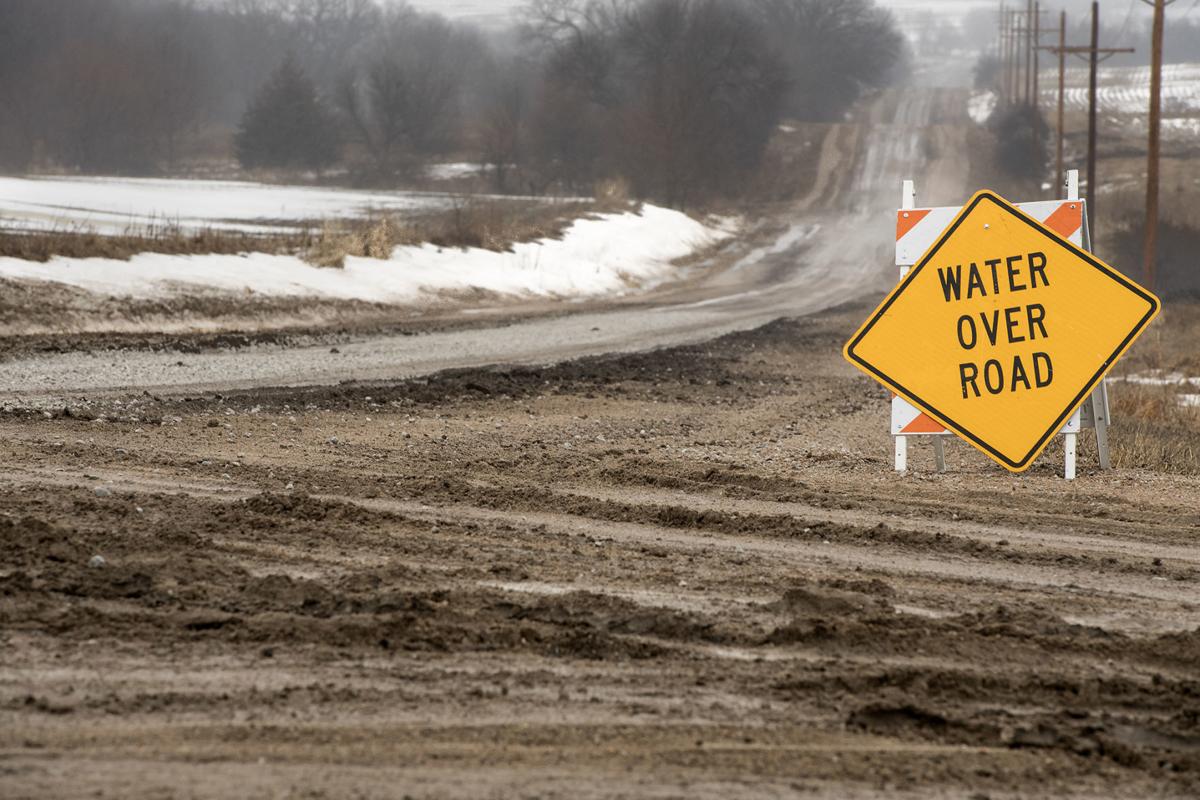 A confluence of factors has led the National Weather Service to warn of the possibility of "major to potentially historic" river flooding this week.

Much of eastern Nebraska is expected to get anywhere from 1 to 2¼ inches of rain through Thursday, which certainly isn't a historic amount, especially in March.

But, combine that precipitation with frozen ground, saturated soil, a still hefty-but-melting snowpack and thick ice on many rivers, and you've got a recipe "to produce a well-above- normal flood risk for a storm of this magnitude," the National Weather Service said in a situation report issued Tuesday.

Both the city and Lancaster County are preparing for potential flooding and monitoring low areas where flooding is most likely to occur. And officials warn drivers to pay attention to barricades and not drive through floodwater.

Six inches is all it takes to sweep away a person and two feet of water can sweep away a vehicle, said Lancaster County Sheriff's Capt. Josh Clark.

The city has staff and contractors on standby. The county has purchased extra rock to put on gravel roads and has been removing snow from ditches using backhoes to allow for movement of water.

With wells on both sides of the Platte River and on an island of the river, the city believes it can handle "whatever the river does," said Donna Garden, assistant director for the Lincoln Transportation and Utilities Department.

Black Hills Energy spokeswoman Brandy Johnson asks people to call the company to shut off gas if they must evacuate a home because of potential flooding.

Most of eastern Nebraska is in a flood watch through Thursday night, and the Weather Service said several rivers in the area are expected to reach major flood stage over the next several days, including the Missouri, Platte, Elkhorn and Blue.

Flood warnings are already posted along dozens of rivers and streams, some of which could see record or near-record water levels.

For example, the Platte River near Louisville is expected to crest at 12.2 feet Thursday, which would be just below the record of 12.4 feet dating to 1960.

In some areas, flooding won't come until later. The Missouri River at Brownville is expected to reach its crest of 44.3 feet Sunday. The record level there is 44.8 feet in 2011. Missouri River levels are expected to stay above flood stage for more than a week.

J. Renee Crisler, the Nemaha County emergency management director, said the Brownville area floods often and so normal precautions are being taken, such as notifying residents and making sure there aren't any people camping in parks near the river.

Shell Creek, near Columbus, is forecast to blow past its record flood level of 22.8 feet, with a crest of 24.7 feet predicted for late Wednesday.

The Lincoln area could see some minor flooding from Salt Creek. The creek is expected to crest at 19.2 feet at Roca and 20.8 feet at North 27th Street, both of which are just above the threshold for minor flooding.

Farther north, moderate flooding is forecast along the creek at both Greenwood and Ashland.

Salt Creek flows south to north before connecting to the Platte River at Mahoney State Park.

In Lincoln, rainfall could be heavy Wednesday morning, with a slight risk of severe weather — hail and high winds — possible if the sun should break out for a time Wednesday afternoon.

Thursday, colder air will arrive, and rain could turn to snow in some areas. Lincoln is expected to receive little if any snow, although high winds could be a problem, with gusts of 40-50 mph possible.

Just west of Lincoln, an inch or two of snow is possible, which, when combined with high winds, could make travel difficult. A winter storm watch extends as far east as York and Hebron.

Much farther west, the Weather Service has issued blizzard warnings for the Nebraska Panhandle and other parts of western Nebraska.

The Nebraska Department of Transportation announced Wednesday morning it will close westbound Interstate 80 at Ogallala at 11 a.m. CT due to the predicted blizzard. Travel on secondary roads west of Ogallala is not advised.

"If and when it snows it will be a blizzard," Jerilyn Billings Wright, a Weather Service meteorologist in Hastings, said during a conference call Tuesday afternoon.

I-80 over Platte River

City ramps up efforts to fill potholes; county gears up for possible rain

Eighteen crews, and about 60 city employees, were out in force Monday filling potholes on city streets in an effort to repair as many as possi…

NORTH PLATTE — The National Weather Service is posting blizzard warnings for the Nebraska Panhandle and other parts of western Nebraska.

Is this the snowiest winter ever? Depends on who you ask

Depending on what source you use, this has been either the snowiest or second-snowiest winter in Lincoln's history.

Clean gutters, free downspouts: How to keep the coming water away

You should check your basement when you’re done reading this.

I-80 west of Ogallala to close in advance of blizzard; Ricketts declares emergency

The Nebraska Department of Transportation announced it will close westbound Interstate 80 at Ogallala Wednesday in advance of a predicted blizzard.

Flash flood emergency up for Platte after ice jam breaks; 1 missing in Norfolk

Flooding could linger, get worse in some areas

The latest advice on flooding in eastern Nebraska: It may get worse before it gets better.

A sign warns drivers of road conditions on Southwest 42nd Street heading north of Panama Road on Tuesday. Officials say this could be a common sight across eastern Nebraska the next few days.