Climb immediately: Plane tumbles through clouds above Lincoln
0 Comments
Share this
1 of 4 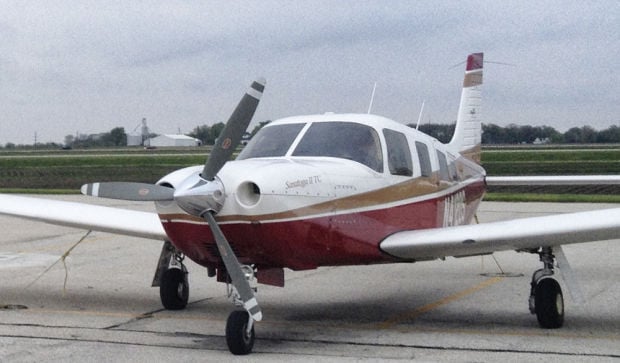 Michael Bukstein came close to crash-landing his Piper Saratoga after it carried him and wife, Sherry, on a harrowing ride above Lincoln in December. 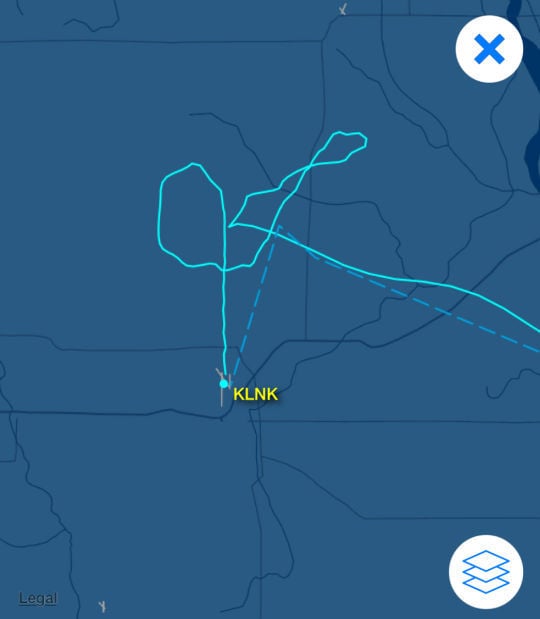 When the instruments in Michael Bukstein's Piper Saratoga failed in December, the plane carried him on this confusing route through the clouds above Lincoln, and almost dropped him out of the sky. (KLNK is the international airport code for Lincoln's airport.) 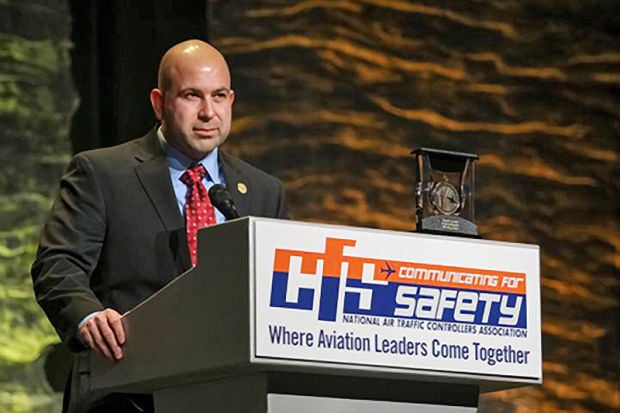 Travis Arnold, an air traffic controller based in Bellevue, recently received the Archie League Medal of Safety Award from the National Air Traffic Controllers Association. One controller from each FAA region receives the annual honor for saving a life or lives. 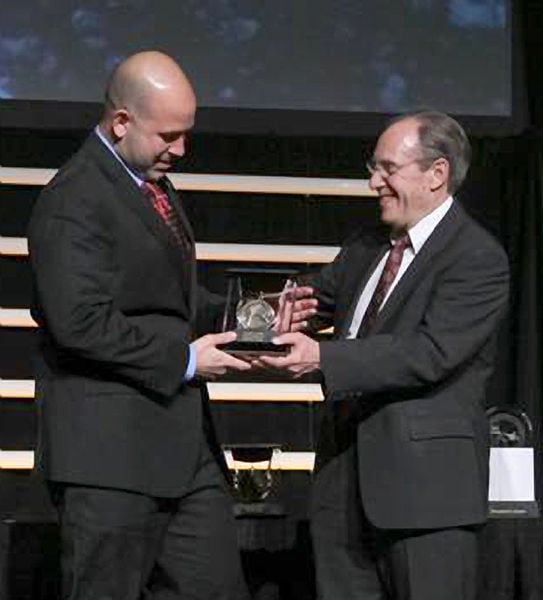 Travis Arnold (left) is presented an air traffic control award by Michael Bukstein, the private pilot from Missouri whose instruments failed as he was trying to land in Lincoln in December.

From a windowless room in Bellevue, Travis Arnold picked up the Piper near Nebraska City, just after it crossed the border from Missouri.

The single-engine plane can seat six but it carried only two that day, a couple headed from Hannibal to Lincoln for their daughter’s baby shower.

It was Arnold’s job to get them there.

“Most people think of air traffic controllers, the only thing they think about are the people in the tower,” the 32-year-old said. “By far, more controllers are involved in something people don’t see. They sit in front of radar scopes in a dark room and guide aircraft through the skies.”

The skies were mostly empty Dec. 13, the clouds thick and gathered low, maybe 800 feet from the ground. Most private pilots fly visually, and they need to be able to see what’s below and ahead of them.

“So when it’s not very nice outside -- if it’s foggy or there are low ceilings -- they don’t fly,” Arnold said. “That day was super slow.”

That would change during the 45 minutes he spent that afternoon trying to coax the Piper to the ground, the small plane disobeying his directions as it turned and tumbled through the clouds north of Lincoln.

A few months later, the pilot would stand on a stage in Las Vegas, addressing a room full of air traffic controllers.

And he would tell the audience: “Travis Arnold saved my life.”

Michael Bukstein has flown for 45 years, logging more than 850 hours. He’s instrument-rated, allowing him to use his gauges to cruise through clouds most private pilots must avoid.

The two-hour trip to Lincoln was his second flight since having it serviced. And most of it was uneventful. He sailed up through Nebraska with his wife, Sherry, and their 100-pound chocolate lab, Molly, in the back.

From Bellevue, Arnold watched the blip on his radar screen. When it was about eight miles north of Lincoln, he told Bukstein to turn left and begin his approach. The pilot answered from the clouds, acknowledging Arnold’s directions.

But the Piper crossed the approach line and was now heading southwest.

No cause for alarm, Arnold said. “It’s not uncommon for a pilot to fly through the final approach course. It happens from time to time, for whatever reason.”

So the air traffic controller tried guiding him left again, to correct his course. The plane kept turning, and turning, and started flying northeast toward Omaha.

“I made contact with him, and he said he’s having some weird readings on his gauges,” Arnold said. “Thank God it was not very good weather, because he was the only airplane I talked to for 45 minutes.”

Arnold has more than a decade of experience as an air traffic controller, about half of that with the Air Force. He knows what can happen to a pilot in deep cloud cover without working instruments. Spatial disorientation, complete confusion.

“You don’t know what’s up, down, left, right. You have no perception of where the ground is.”

In the Piper, Bukstein was struggling to understand what was going wrong.

“The plane started making turns in unpredictable directions,” he said. “I didn’t recognize what the problem was immediately.”

Pilots flying by instruments watch all of their gauges, but they focus on the attitude indicator. It shows them the plane’s position relative to the ground -- nose up or down, wings tipped or level. And Bukstein had lost that, along with most of his other instruments.

He didn’t know if he was banking or climbing or falling. And looking out the windshield didn't help, because there was nothing but clouds. In fact, he was trained not to look out the windshield while instrument flying because it can cause disorientation.

Instead, he was told to rely on his instruments, but they didn’t seem to be working.

Arnold spoke again into the radio, a calm voice. He tried putting Bukstein and the Piper into a slow turn, a full minute to change direction from east to west. About 15 seconds in, he saw them descending.

“He was dropping like a rock. He was about 800 feet off the ground, which sounds like a long way to a normal person, but you can cover that in no time when you’re doing 130 mph.”

But Bukstein was relieved when the Piper dipped out of the clouds.

“I was delighted to see the ground,” he said. And he was already thinking about crash-landing protocol: Power off, close gas tanks, unlock doors. He started looking for a field. He knew he’d destroy the Piper but he wanted to deliver Sherry and Molly to safety. He wanted them all down.

In Bellevue, Arnold had the opposite reaction.

He heard nothing from the Piper.

“The stress level inside your body goes up,” Arnold said. “You know something’s not right.”

Bukstein was making a decision: “Am I going to listen to him or am I going to land this thing in the farm field up ahead?”

“It took me a few seconds to kick that in and make the commitment to go up into those clouds, because I knew it would be difficult again.”

But when he throttled up and climbed -- to 3,000 feet, then 4,000 -- his instruments returned. Arnold guided him above the clouds and put him through a few turns, the gauges still working.

“Once he was up there,” Arnold said, “everything was beautiful.”

Bukstein diagnosed the problem. His instruments are run by a vacuum system, powered by the engine. When he had approached for landing, he’d powered down, lowering the air pressure the instruments needed to operate.

Because of the malfunction, Arnold declared an emergency and asked Bukstein a series of standard questions.

How much fuel on board?

That last one troubled the pilot. It made the danger more tangible, more personal. “That gave me pause. That’s a bad question. That’s like asking: How many bodies are we going to look for?”

He answered: Two humans, one Lab.

Arnold also gave the pilot his reassurance: Instead of handing him off to the Lincoln tower for the landing, he would remain in Bukstein’s ear.

They made it all the way to the ground. Sherry made it to the baby shower. The pilot got the Piper checked out and they flew home to Hannibal without incident.

Bukstein thought about it. When he had the Piper serviced, the mechanics adjusted the vacuum down, and that could have killed his instruments when he slowed for the landing.

Last month, he and Sherry flew the Piper back to Lincoln -- without problems -- for the birth of their granddaughter, Charlotte, to Sabrina and Hank Cerny.

In Bellevue, Arnold’s co-workers suggested his performance was worthy of an Archie League Medal of Safety Award -- named after the first air traffic controller and given to controllers credited with saving lives.

“I said, 'I think we might be stretching here. This is not a big deal.' I never thought in a million years I would have won it.”

But earlier this month, he shared a table with Bukstein in Las Vegas, then listened as the pilot stood on stage, describing the instant when the ground loomed below him and Arnold told him to climb.

“At that moment, I had 100 percent confidence in Travis,” he told the crowd. “I felt like he was sitting right next to me in that copilot seat.”

Arnold joined him on stage to receive his award. Thank you, he said.

Later, he would acknowledge the danger Bukstein had faced. He would also deflect all the credit for helping the pilot escape it.

“Without a doubt, that was a life or death situation,” he said. “But I did save his life? I don't think so. That's just my job.”

Changing of the guard returns to Windsor Castle

Changing of the guard returns to Windsor Castle

Virus Inequity: The haves and the have nots

Virus Inequity: The haves and the have nots

In a flash, ‘superhero’ saves the day on 27th Street

Audio and radar of troubled plane above Lincoln

In December, a small plane tumbled through the clouds above Lincoln. An air traffic controller in Bellevue talked the pilot down to the ground…

Michael Bukstein came close to crash-landing his Piper Saratoga after it carried him and wife, Sherry, on a harrowing ride above Lincoln in December.

When the instruments in Michael Bukstein's Piper Saratoga failed in December, the plane carried him on this confusing route through the clouds above Lincoln, and almost dropped him out of the sky. (KLNK is the international airport code for Lincoln's airport.)

Travis Arnold, an air traffic controller based in Bellevue, recently received the Archie League Medal of Safety Award from the National Air Traffic Controllers Association. One controller from each FAA region receives the annual honor for saving a life or lives.

Travis Arnold (left) is presented an air traffic control award by Michael Bukstein, the private pilot from Missouri whose instruments failed as he was trying to land in Lincoln in December.