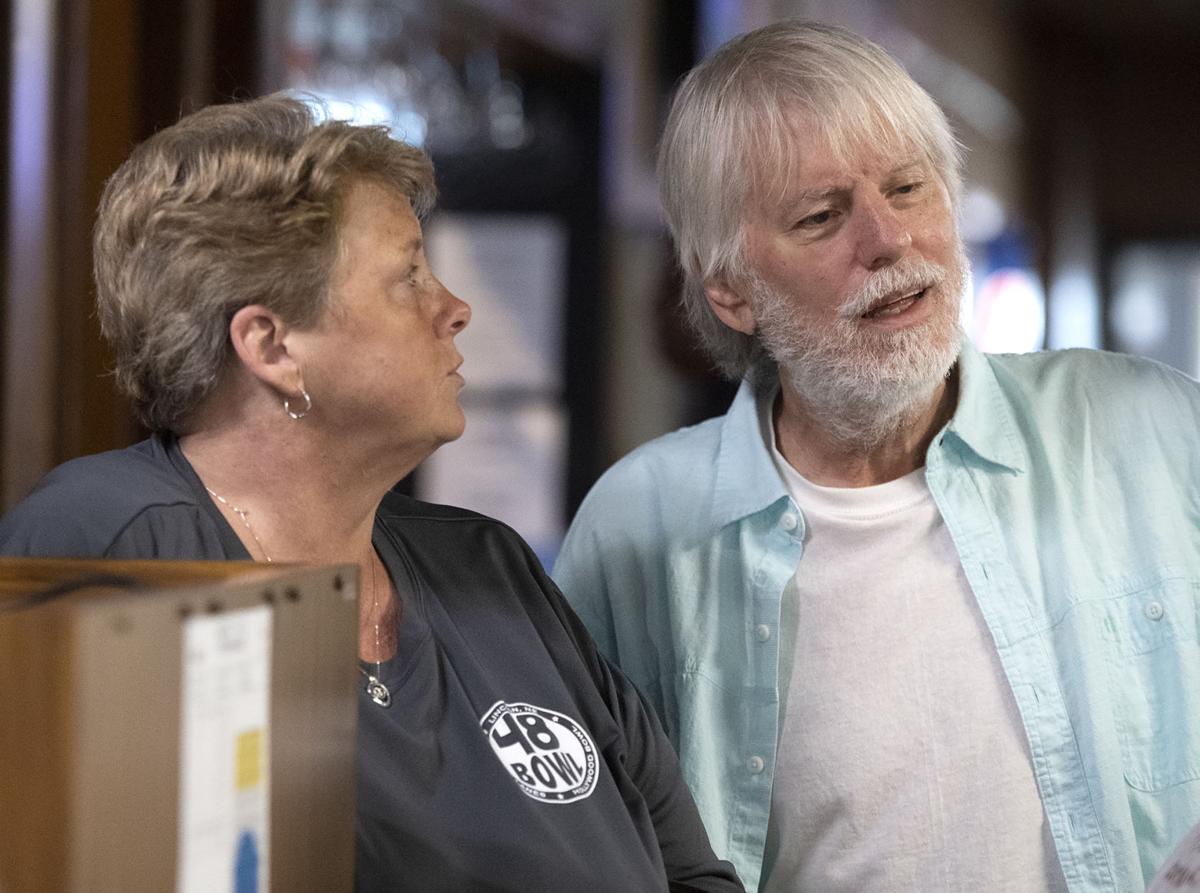 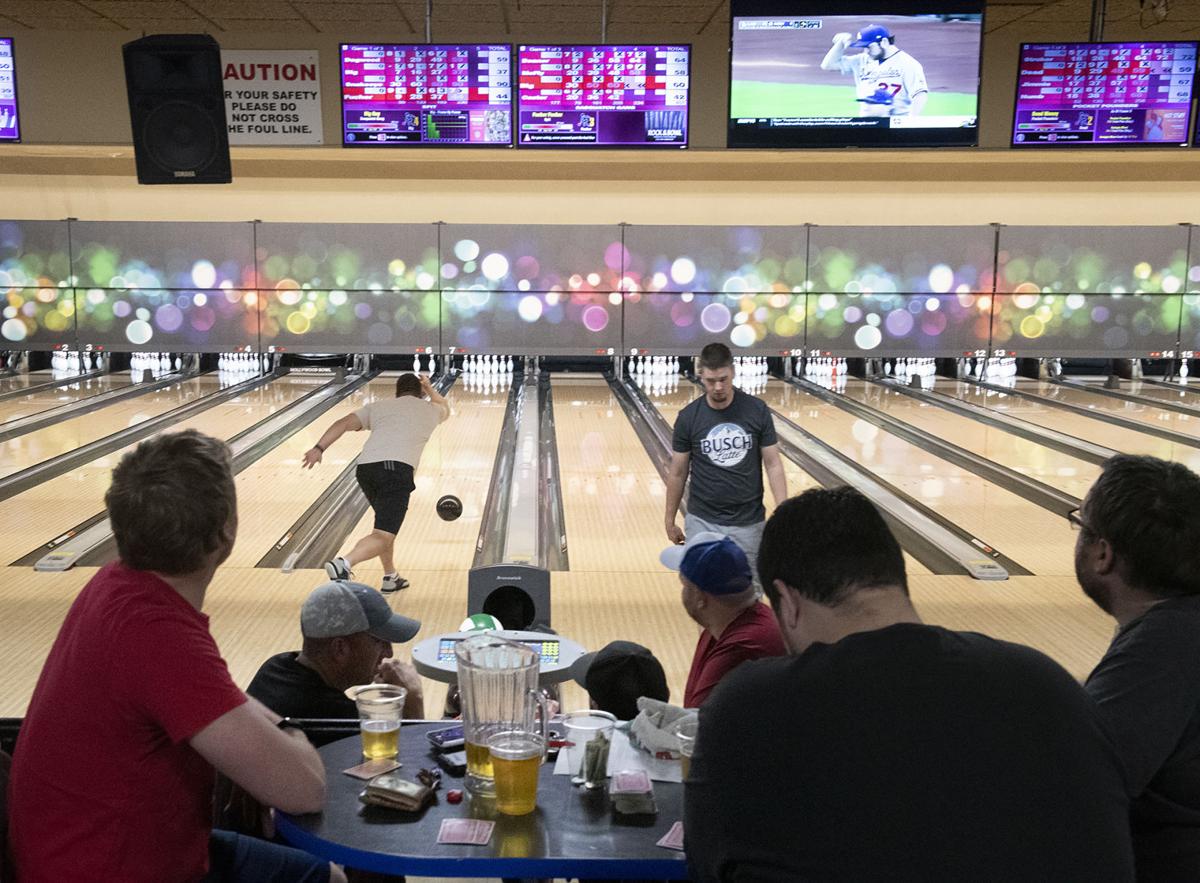 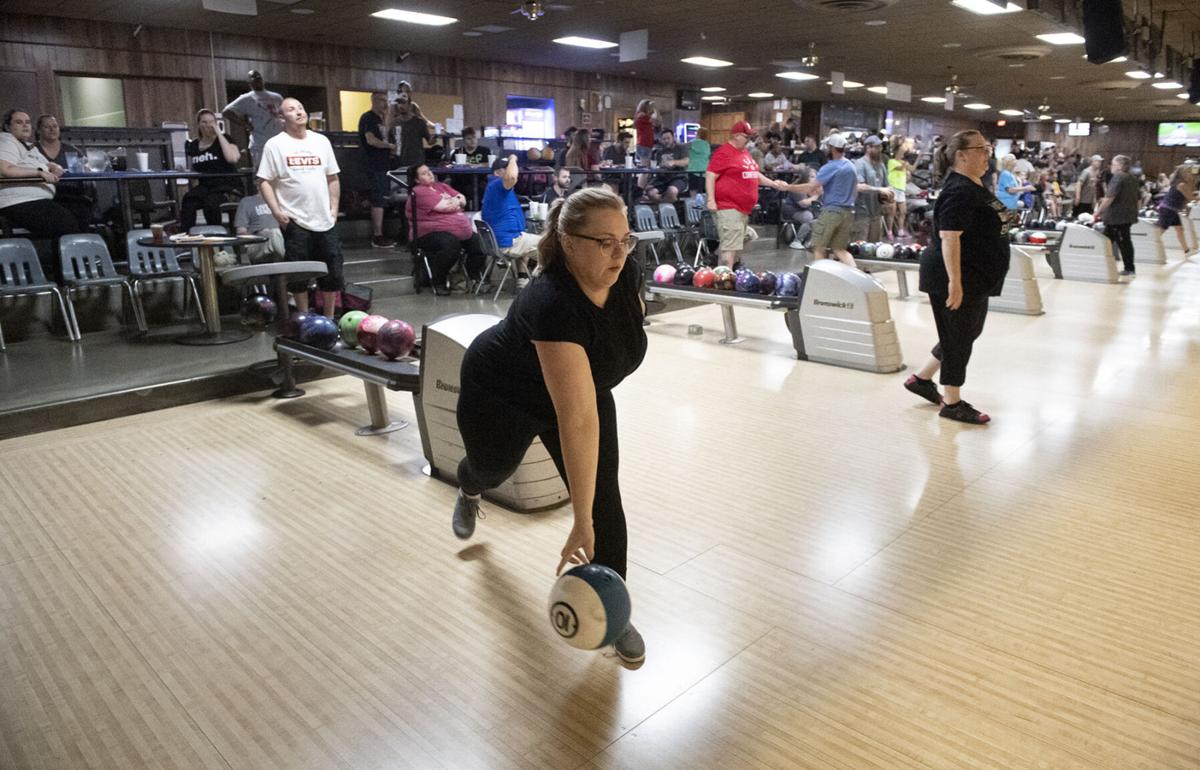 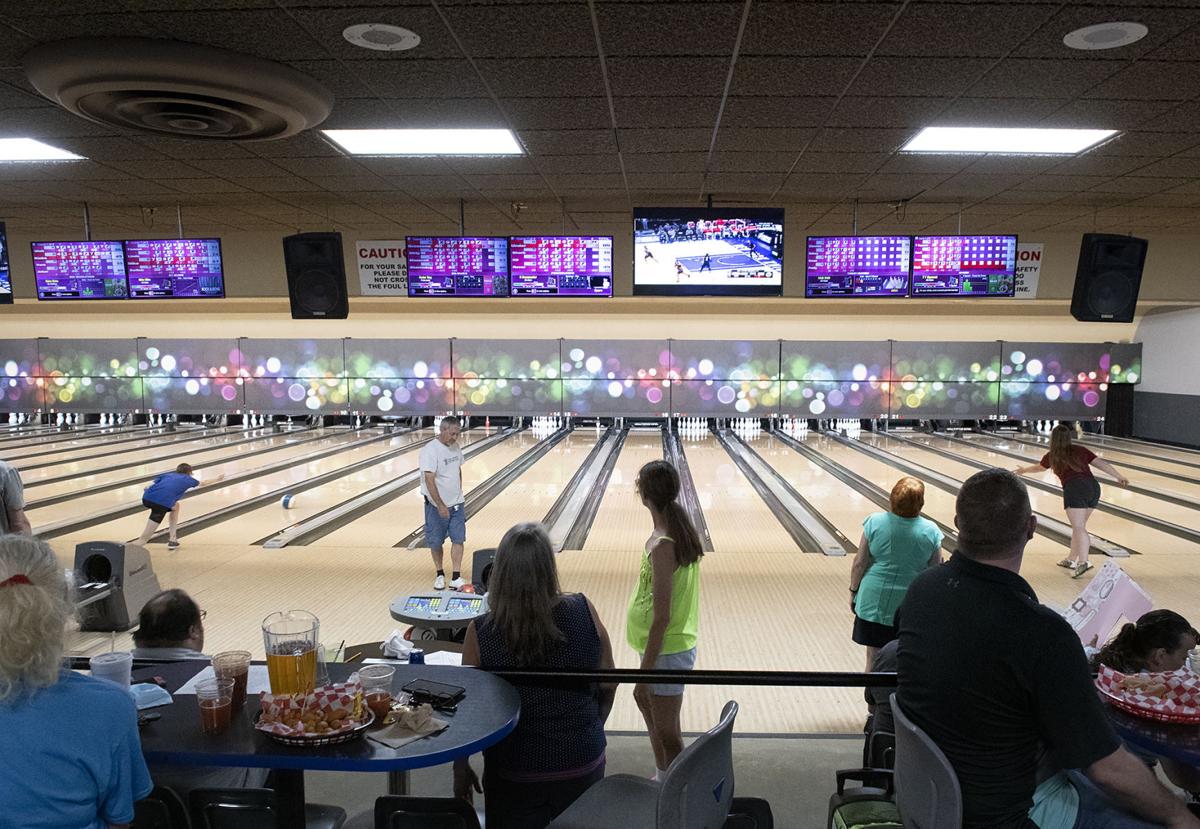 Bowlers compete in the Wacky Wednesday bowling league at Hollywood Bowl on Wednesday. 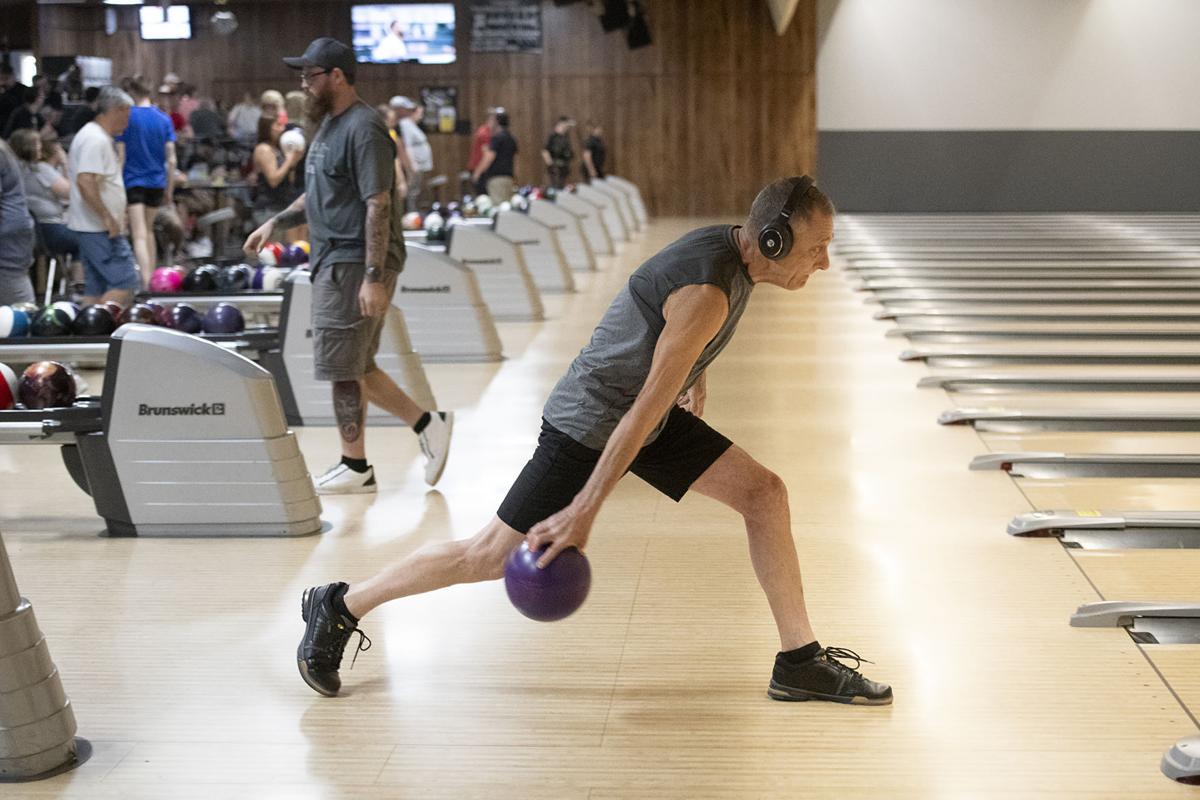 John Orth bowls a strike at the Wacky Wednesday bowling league at Hollywood Bowl on Wednesday. 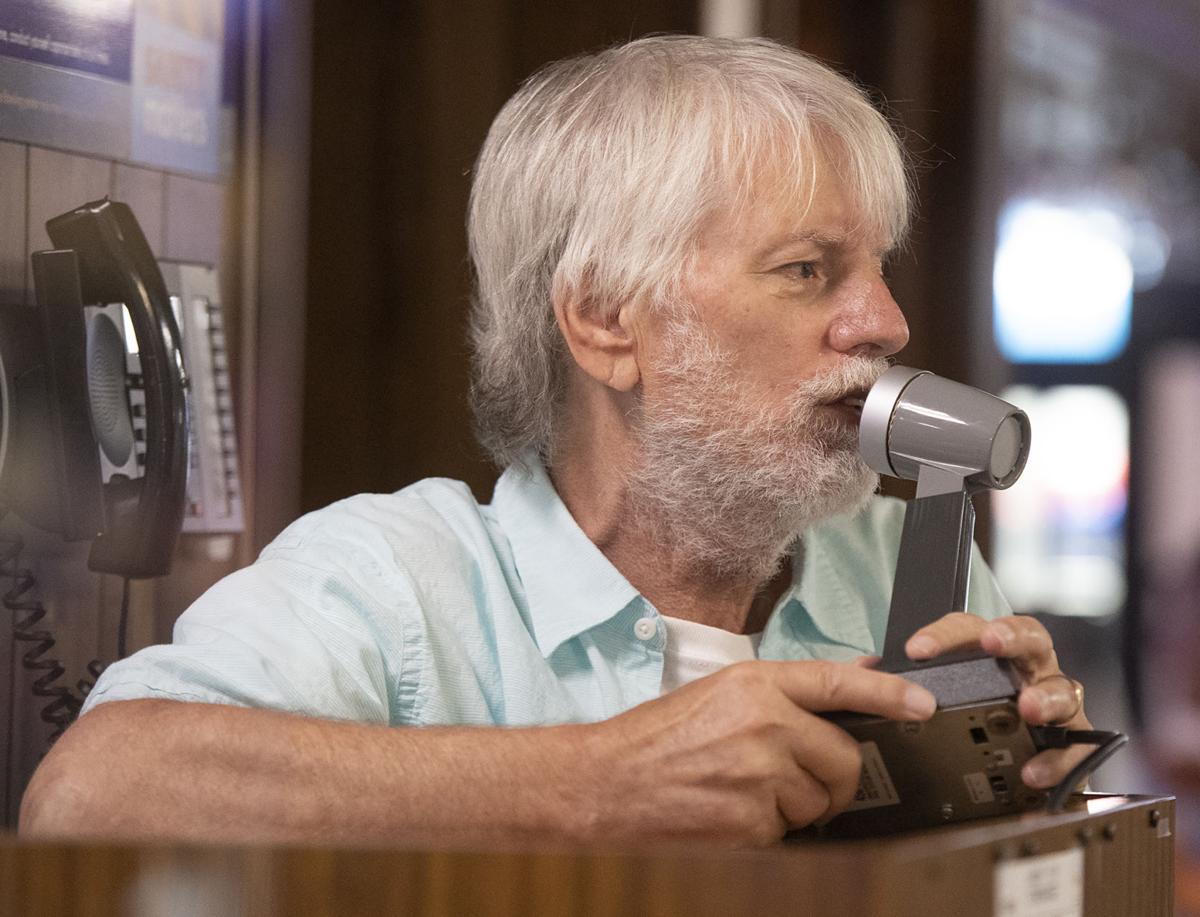 Harvey Kaufman kicks off the bowling at Wacky Wednesday bowling league at Hollywood Bowl on Wednesday.

On the first Wednesday in May, Harvey Kaufman woke early.

He ate a banana and drank a half a glass of chocolate milk and went back to bed.

It was a big day.

He was heading back to work for the first time since a stroke had sidelined him in August — back to his job as grand master of the Wacky Wednesday Bowling League.

Only this spring, the balls wouldn’t skate down the lanes at Madsen’s Bowling and Billiards the way they had for 35 years.

Harvey would be starting over at Hollywood Bowl after a parting of the ways during the pandemic.

By late afternoon, he was still on edge. He could barely eat lunch.

When his wife, Kim, got home from work she had a suggestion: Why don’t you take a walk?

Before the stroke, the shaggy-haired man who favors cargo shorts and tennis shoes always tried to walk 3 miles a day, and he was working his way back to that number.

But that May day?

“I walked more than 6 miles,” Harvey says. “Then it was time to come to Hollywood.”

Bowlers were lined up at the door at Hollywood Bowl at 48th and Vine to mark his triumphant return. All 24 lanes full of his loyal followers.

Teams with names like the Bar Wenches and the Fish Heads, the Pin-a-trators and Six Schlitzes.

Bowlers who showed up because of Harvey and the fun he brought with him.

He drove over from his home on Bradfield Drive that night, and Kim and their son Cody tagged along.

Halfway through the three-game evening, Harvey started feeling weak. He made it to the bathroom and collapsed into his son’s arms, dehydrated from all that walking.

Paramedics arrived and strapped him to a gurney.

Harvey held his arms aloft as they wheeled him out the doors, lanes quiet as his bowlers watched him go.

His thumbs held a message: I’ll be back.

Harvey grew up in Lincoln.

His mom was the city secretary for sanctioned bowling. Stella Kaufman organized trips to state and national tournaments and bowled herself for nearly 60 years.

“I kind of learned this from her,” he says.

Back in 1984, Harvey and Kim were new parents to the first of their three children, daughter Casey. Harvey had a degree in business but not much interest in 8-to-5.

He liked doing things his way, Kim says. He was imaginative and fun.

“I was a hippy,” he says with a shrug. “And Earl Madsen and my dad were friends.”

Earl welcomed him into the family business. Counterman, clean-up guy — mopping floors, scrubbing toilets — whatever needed doing, Harvey did it.

A few years later, Harvey approached his boss. He needed to make more money for his growing family and it turned out that Earl needed help getting bowlers in the door on slow Monday nights.

Cindy Lange-Kubick: Celebrating Civic Saturday with a book to bring us all to the table

Harvey told him he’d form a league, split the profits.

It was a deal.

He called it Monday Night Madness.

“My first league had six teams and I was one of the teams,” Harvey says.

He recruited his brother and two cousins. They called themselves the Kaufmen.

When it was time to re-up the league, Harvey had 12 teams.

He went to Earl: How about another league?

Wacky Wednesday, he called it.

And then came Sweet Sunday.

He recruited employees from the newly opened Outback down the street. And from TGI Fridays.

He sweet-talked second-shift workers and formed a league that started at 11:30 p.m.

“I wanted people who had never bowled in a league before,” he says. “I’d say, you have an 80 average? I got a league for you.”

The leagues weren’t sanctioned by the bowling gods. No one would get official recognition for a high score or series, but it didn’t matter.

Harvey was all about the fun.

He had a sly wit and a salesman’s natural friendliness.

He went scavenging. He collected coupons for free food to hand out, he stocked up on Halloween-sized candy bars and stuck them in a plastic tub.

“Taco Bell and Godfather’s were my first two,” Harvey says. “I was making it silly, making jokes. People would hear me giving stuff out while they were playing pool and wanted to join.”

His fans kept showing up to bowl.

A free dog wash at the Canine Scrub!

At the end of every season, they celebrated. Free beer! Free pop! Free pizza! Trophies!

One year at Halloween, the Sasquatch Gang all came wearing shaggy gray wigs.

After COVID-19 hit, the leagues went on hiatus, but by late last August, Harvey was working on a way to bring them back.

He was standing in front of Kim at home that Wednesday. His right side drooped. His mouth was moving but he wasn’t making sense.

His wife knew just what was happening and within two hours he’d been given a clot-busting drug at Bryan West Campus.

He went to rehab at Madonna and started to regain what he lost.

By the time he started calling his bowlers — same league, new venue — they’d all heard.

“I got a hold of the first six people,” he says. “They all said, ‘We’ve been waiting for you to come back, Harv.’”

Harvey is all the way back.

After that first wobbly week, he got stronger.

Bowlers yelled at him when they walked past on their way to order a burger or buy a beer: “Drink water!”

His bowlers naturally look out for him the way he looks out for them.

“There’s no other reason people are here,” says Tim Nathan, subbing for the Funky Bunch. “Everyone comes out of here with such a positive vibe.”

“He’s just so genuine,” says Erin Hou, a longtime member of the Panty Droppers. “He gets to know you. He’s interested in you as a person.”

Erin hitched her wagon to one of Harvey’s leagues in 2002 after she arrived in Lincoln for college. She recruited teammate Ashley Cantrell when the two met working at TGI Fridays.

“He’s like another dad to me,” Ashley says. “He was at my wedding.”

Or to smash all 10 pins when the red head pin shows up and come collect their goodies.

There’s money in the hopper for one lucky bowler during the weekly Money Shot. (More if you can roll your strike granny-style — between the legs.)

“The first week no one knew how to turn off the lights,” Harvey says.

Cindy Lange-Kubick: The summer of 2021 — embarking on my farewell tour

His new bowling alley figured it out.

“If you need a sub, there’s no texting, you have to call,” says Leslie Ferguson who bowls on the Pinhounds with her boyfriend, Mike Wensel.

Harvey calls all the team captains each season — on a landline — to see if they plan to return. He writes out the standings with a pencil, keeps records the same way.

Jason Zabel has been bowling in the Wednesday league for years, familiar with its leader before he joined.

“All they had to do was mention Harvey and I was in,” he says.

And he won over the Hollywood staff from the start.

And when he approached them about starting a summer league and they had Wednesday night open, there was no question.

“I’ve never met a nicer bunch,” said Matty Gross, assisting Harvey on the microphone and the rush of handing out prizes.

The Wacky Wednesday summer league will end in August, and there’s already a fall league in place at Hollywood.

When he heard the news, Harvey got out his pencil. He wrote a note to each team captain, with little boxes to check.

One said: Would be interested in bowling on Mondays.

He has the slips of paper on hand Wednesday night. Lots of Xs.

He has 29 teams ready to bowl; 24 each week with 5 teams on a bye week each month and room for three more to join the party.

The same name he started with 35 years ago.

And went home the next day to rest, drink water and take a short walk.

Cindy Lange-Kubick: The joy of summer brought to you by Deb and her produce stand on the highway in Lincoln

The camp stewards serve as "a catch-all," one said, working as greeters, ice salesmen and a concierge service. But when they turn in for the night, alert only to knocks on the door, horseplay sometimes ensues.

After subpoenaing internal affairs documents from the jail, a deputy sheriff said, he learned that Kimberly Whitney had personal, concealed conversations with at least three inmates using a cellphone to communicate 98 times.

"It's not just you that we're here about today. It's about all those folks that buy these drugs from you and about the risk that that poses to the community," District Court Judge Susan Strong said.

True-crime author Harry MacLean, who grew up in Lincoln, has been considering a Starkweather book for decades. "This story has never really been told, particularly in the context of what’s happened since then."

Teen quickly jumped into the pond and pulled the boy out. He said he was acting purely on instinct in that moment.

Melissa Armendariz, a competitor from Mexico, linked up with a mare in Lincoln, where the 18-year-old and first-time National High School Finals Rodeo attendee has learned to ride and love "Fine Little Ruby."

Bowlers compete in the Wacky Wednesday bowling league at Hollywood Bowl on Wednesday.

John Orth bowls a strike at the Wacky Wednesday bowling league at Hollywood Bowl on Wednesday.

Harvey Kaufman kicks off the bowling at Wacky Wednesday bowling league at Hollywood Bowl on Wednesday.