Coronavirus update: How the Catholic Church won $1.4B in virus aid; Starbucks to require masks

Cindy Lange-Kubick: The banners of inclusion come down from the Lavender Mansion
View Comments
Share this
Return to homepage × 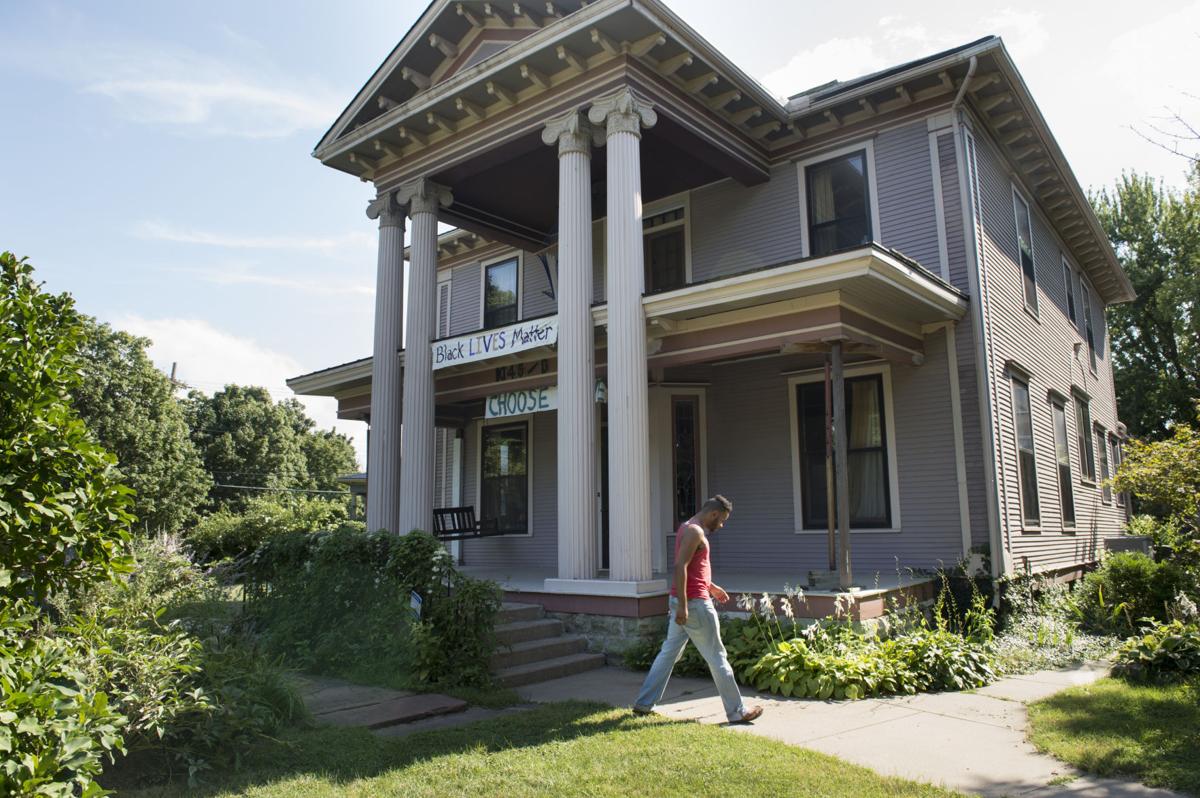 VJ Herbert hung the banners from the big house at 11th and D streets. “I call this the lighthouse,” he says of the lavender mansion. 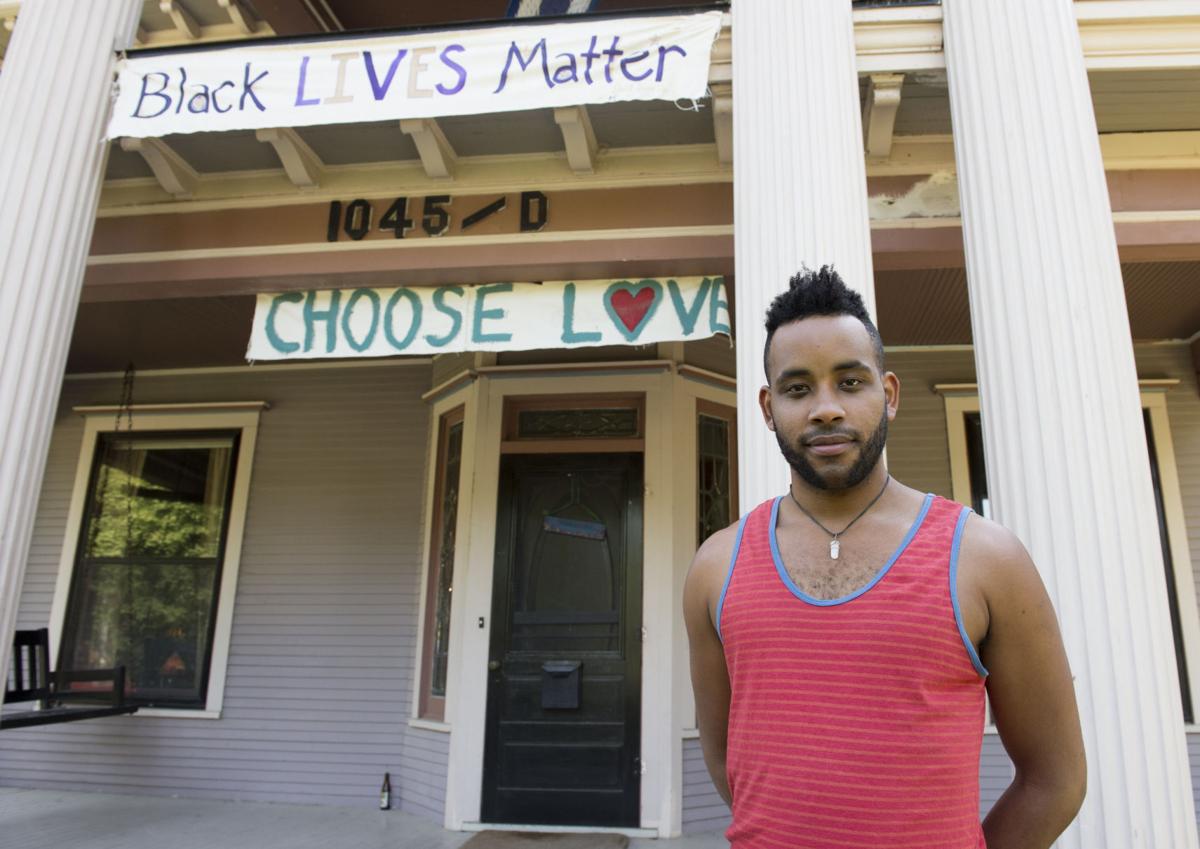 His landlord asked VJ Herbert to take down the banners at the lavender mansion.

All summer, the banners hung high above the veranda of the Lavender Mansion on the corner of 11th and D.

The Black LIVES Matter banner in tall letters stretching from column to column above the second-floor porch, and below that, smaller but just as bold: CHOOSE LOVE.

Beacons, VJ Herbert called them. Public declarations of solidarity and a symbol to neighborhood residents.

Sunday, the beacons came down.

Late in the afternoon, VJ climbed a ladder and, with friends and neighbors watching, began to pull the largest banner to the ground.

The 30-year-old and his housemates have rented the Lavender Mansion since 2014. They brought the Choose Love banner with them when they moved into the Everett neighborhood -- taking it down from its perch on another rental house, this one in the Near South.

They had created it out of a strip of canvas duck cloth -- donated by an artist neighbor -- in the wake of “a lot of anti-gay sentiment,” Herbert says.

“We wanted to show that this is a safe space and encourage the community to remember that love is an option.”

The banner was colorful and affirming -- who in their right mind wouldn’t choose love? -- and fit Herbert’s philosophy of community and solidarity.

When they took it over to D Street, their new landlord initially said no to hanging the banner, but once she and Herbert talked, he says, she agreed. “It was a positive message,” he says. “And she agreed with the message.”

Herbert is black; he’s also gay. He came to Nebraska when he was 18, was homeless for nearly two years and eventually started studying music at Doane College, becoming the first in his family to graduate from a four-year college.

“Going from being homeless to moving into this mansion was such a huge blessing, I cried,” he said Monday.

Herbert directs a gospel choir at Quinn Chapel. He is a member of a vocal harmony group called Xion and for three years he scooped ice cream at Ivanna Cone, but he sees his main work -- his primary purpose as a human -- to spread light.

“I call this the lighthouse,” he says of the Lavender Mansion. “Gandhi said be the change you want to see in the world. That’s the cause I’m dedicated to.”

And in July, after the deaths of two black men -- Philando Castile and Alton Sterling -- at the hands of police, they painted on another strip of canvas and let Black LIVES Matter fly.

“We put that banner up because we live in one of the most diverse parts of Lincoln; I thought it was something we could do to encourage people of color in this community who are feeling extremely vulnerable.”

He and his roommates noticed people were heartened by the banners. Random photos would show up on social media accounts, passersby would wave or give a thumbs-up.

"A lot of children of color and their families walk by here. It was very exciting (for them) to see this house have such a welcoming message."

The signs weren't meant to be anti-anyone, Herbert said.

At least not to them.

But last week, the landlord sent him a text message. Neighbors had contacted her, saying the banners were tacky and divisive, and were pressuring her to remove them, Herbert says.

And so Herbert agreed to take the banners down. But he wishes the neighbors had come to him, talked to him face to face.

“Engage with us,” he said. “Engage with us within the community and as actual people who live here. You’re honoring me as a person when you do that.”

He invited the community to watch the banners come down Sunday afternoon and nearly 30 people did, spontaneously chanting “Black lives matter,” as the largest banner came down.

Even without the banners flying at the Lavender Mansion, Herbert hopes his neighbors will remember their purpose.

“If the story can show that love will always triumph, it will send the message of what the house has always been about.”

And that’s how the story appears to be ending, with promises from people like Aja Martin, and others, to carry the message forward.

“I’m not artistic, but I talked to my landlady and I plan to put a big sign in the window,” Martin said.

The original banners went home with Shannon Cameron, an East High teacher who met Herbert when he arrived in Nebraska and has watched him live his mission of love and community.

“He comes from a place of total love,” she says. “Those messages of Choosing Love and that Black LIVES Matter are really important messages that people of all colors and backgrounds need to see to make Lincoln a more accepting community.”

On Monday afternoon, Cameron, who is white, turned the banners over to Adrian Sanchez.

The chair of the Nebraska Latino American Commission planned to take them home.

And hang them on his fence in southeast Lincoln.

Cindy Lange-Kubick: Showered by a thousand paper cranes of hope

Becca Manner was waiting for a liver transplant the last time I saw her, fingers folding colorful pieces of paper into tiny origami stars.

Cindy Lange-Kubick: A world of rocks, rocking my world

I don't collect salt and pepper shakers or decorative plates that say things like “Brainerd, Minnesota, Home of Paul Bunyan.”

Cindy Lange-Kubick: Arranging flowers at the hospice, spreading joy to the end

Cindy Lange-Kubick: This wall does talk and it says JIM AND LINDA

On her last night at home, Linda Jackson slept in the attic.

Cindy Lange-Kubick: Making a solid case for the proper use of concrete. You're welcome.

If there is one thing that weighs heavy on Jack Way, one thing set firmly in the footings of his mind, it is the road you are driving on and t…

Cindy Lange-Kubick: The Angel from Yoder and the German POW

The German soldier was 17 in January 1944, a kid learning to be a carpenter before the Nazis drafted him to fight.

Standing in the front row at last year’s Black Lives Matter rally at the University of Nebraska-Lincoln, Kendall Dawson prayed the messages pr…

Being gay, being in the military: 'You couldn't be who you wanted to be'

Jake Piccini had an internship at Zillow last summer and he presented an idea to help LGBTQ homebuyers and renters. The country's leading real estate and rental marketplace liked it.

VJ Herbert hung the banners from the big house at 11th and D streets. “I call this the lighthouse,” he says of the lavender mansion.

His landlord asked VJ Herbert to take down the banners at the lavender mansion.