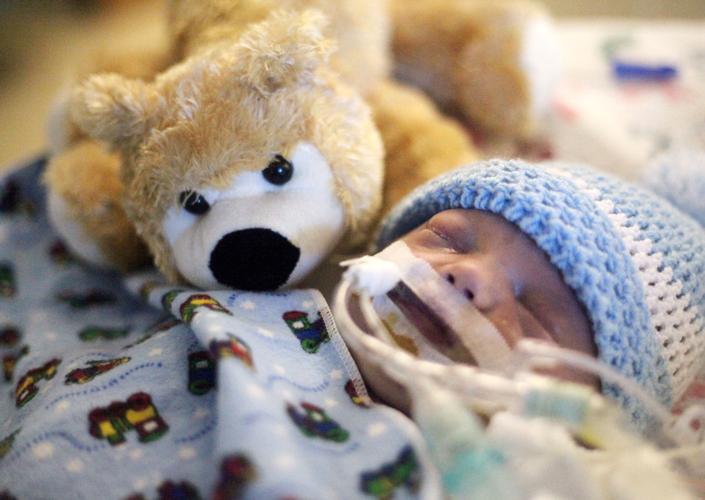 Miles Ludvik died when he was 6 days old. His parents started Shoes for Miles in his memory and to bring attention to congenital heart defects in babies. 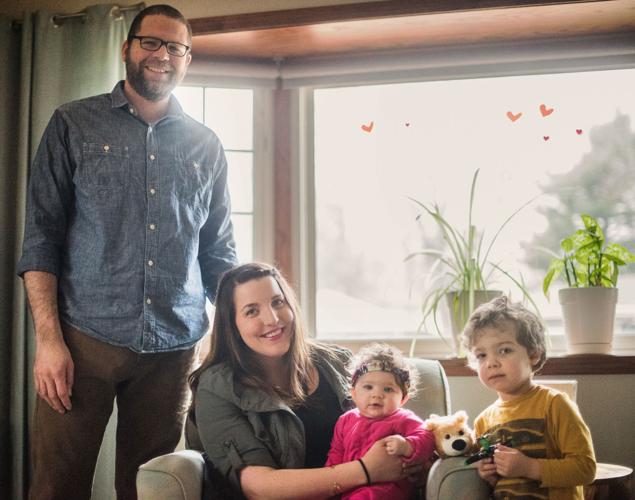 Greg and Dana Ludvik pose for a portrait with Iris, 5 months, and Owen, 3. They lost their second child, Miles, when he was 6 days old and started Shoes for Miles to draw attention to congenital heart defects and honor their son's memory. 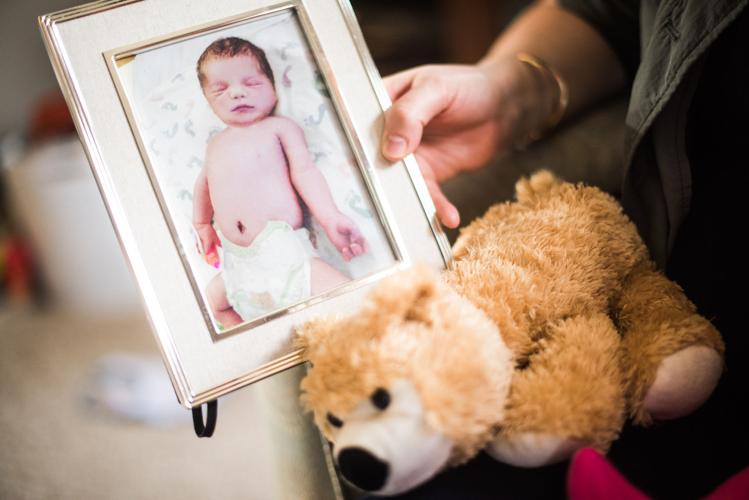 Dana Ludvik holds a portrait of her son, Miles. who they lost to congenital heart disease.

His mom loved his little chin and his sweet nose. She could picture him as a curly-headed toddler like Owen, who was nearly 2.

“He was a gorgeous little boy,” Dana Ludvik says. “On the outside, you wouldn’t know there was anything wrong with his heart.”

Miles was born on Feb. 17, 2014. Two open-heart surgeries couldn’t save him, and he died six days later.

His dad remembers the day Dana came home from her fourth ultrasound, the day a specialist told her: Your baby has a hole in its heart.

Last year, Dana and Greg launched Shoes for Miles as a way to honor the memory of their baby and as a way to spread the word about congenital heart defects like his.

One in 110 babies, says Dana. The most common birth defect, sometimes easy to fix, sometimes fatal.

She remembers what that same fetal specialist said before Miles was born: His condition is not compatible with life …

She remembers thinking: Just say it.

“All along I felt he could die,” Dana says. “I wanted somebody to say it could happen, so I could prepare.”

Dana works in marketing at the University of Nebraska.

The practical part of the Shoes for Miles campaign came easy to her -- designing a flier and making a Facebook page and getting the word out.

“The emotional part was the hard part.”

Shoes for Miles collected 2,327 pairs of shoes in two weeks last February, and Dana and Greg and their friends and families spent a long evening tying the laces together and packing them in big plastic garbage bags to donate to Soles4Souls.

This year, they’re a bit busier so they’re scaling back, Dana says.

This year, they have baby Iris, a 5-month-old with curly hair and a wide toothless grin whose name means rainbow, something they found out later, a bit of beautiful serendipity.

They’ll only collect shoes for toddlers and kids this year, donating them to refugee children in Lincoln through Lutheran Family Services.

Most people hear those words and think about adults and heart disease, Dana says, and that makes sense.

“But I wanted to bring attention to kids. Let people know that, hey, some babies come into the world with heart problems, and how do we bring them into the conversation?”

Although there was nothing she could have done to prevent Miles’ condition, there are questions parents can ask to be sure a heart problem doesn’t go undetected during pregnancy, Dana says.

And signs to look for after the baby is born.

“Many parents are blindsided to learn that their baby’s heart is not working properly in the hospital after giving birth -- or worse -- after they’ve gone home.”

Dana’s own first pregnancy was blissfully worry-free. Owen was born with a midwife attending and that’s what they expected with baby No. 2, too.

And at first, everything seemed fine. But looking back, there were hints. The need for more scans -- we just can’t quite see the baby’s heart -- and then the reality at 25 weeks, the day the technician fell silent as she moved the wand over Dana’s belly.

More tests followed, and meetings with heart surgeons, and a tour of Children’s Hospital in Omaha, where Miles would have his surgery.

His heart had complex structural defects, and although his surgeon held out hope during Dana’s pregnancy, Miles was born five weeks early, with problems more serious than doctors had anticipated.

At home, there’s a photo in the living room, a 6-pound, 12-ounce newborn, eyes shut tight, lying on a blanket covered in baby footprints.

A friend used Photoshop to remove the tubes and wires taped to his little body and erase the open incision in his chest.

Miles spent his short life in the pediatric intensive care unit, hooked up to machines and monitors, poked and prodded.

“He had so much stacked against him ... but he hung on through two open-heart surgeries,” Dana says. “I wanted so badly to change places with him, to scoop him up and take the pain away.”

It was the middle of the night when the nurses came to get her from a room near the PICU where she slept. Dana called Greg to come from Lincoln, where he was home taking care of Owen.

They got to hold their baby in their arms for the first and last time.

That spring, they planted a tree in the front yard in memory of their brave boy.

They plan to take a photo of his curly-headed siblings, Owen and Iris, in front of the sapling each year, a measure of their growth next to a living memorial to their brother.

Sunday is the first day of Shoes for Miles 2016.

A cause that is dear -- and healing -- to his parents’ broken hearts.

Drop off new and gently used kids’ shoes --  toddler to teen size -- at these places.

Shoes should be tied or rubber-banded together.

Several years ago, Tracie Hrnicek joined the Heartland Cancer Foundation board. Her passion was fueled by a desire to help those who not only battled cancer but also struggled to reduce the financial stress that often accompanies cancer treatment. Three months ago, the tables were turned. The passionate supporter of cancer patients became a cancer patient.

Cindy Lange-Kubick: Sandwich maker to the Huskers, Ruth at your service, Feb. 6, 2016

Cindy Lange-Kubick: Doing 80 down an ice-covered track on an $8,000 glorified skateboard

Miles Ludvik died when he was 6 days old. His parents started Shoes for Miles in his memory and to bring attention to congenital heart defects in babies.

Greg and Dana Ludvik pose for a portrait with Iris, 5 months, and Owen, 3. They lost their second child, Miles, when he was 6 days old and started Shoes for Miles to draw attention to congenital heart defects and honor their son's memory.

Dana Ludvik holds a portrait of her son, Miles. who they lost to congenital heart disease.