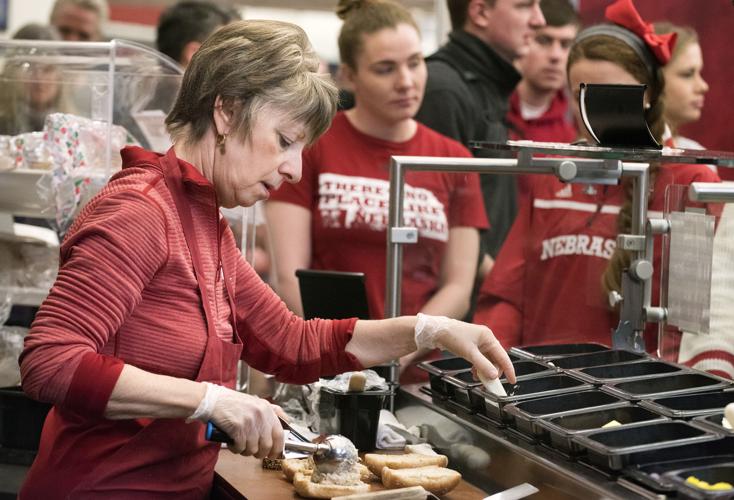 Ruth Hood, who has worked at the Husker training table for 10 years, builds sandwiches during the lunch rush on Friday. 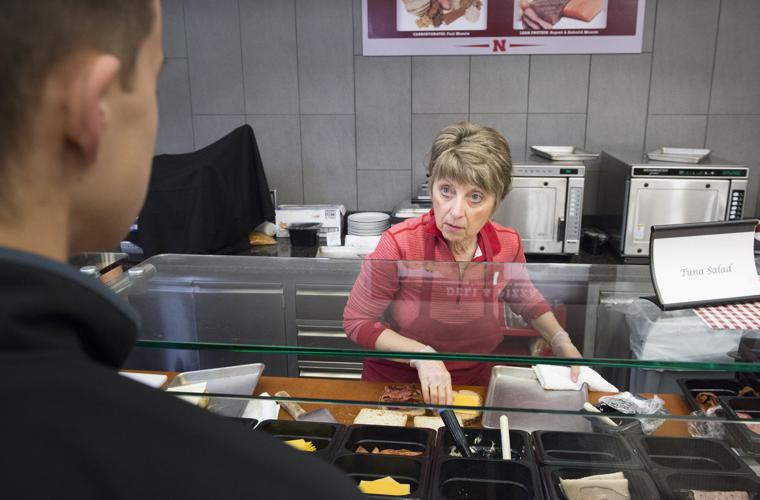 Ruth Hood knows the names of students she serves at the Husker training table.

If you are looking for more than sustenance from your sandwich, look no further.

The Sandwich Savant is here, just inside the doors of the training table -- dining hall of the Huskers -- day in and day out, knowing what you want before you do.

“She’s a genius,” says Antoine Lloyd, a sophomore hurdler in the sandwich queue Thursday. “She always remembers what I want, even the toppings.”

She knows your bread, Antoine.

She knows your protein.

She knows what Nick wants, too, and Caitlyn and Kenzie.

And Taylor Marten, a fan of chicken and Swiss on sandwich thin. Ruth has the bread waiting almost before the track and field intern figures out she’s hungry.

“She sees like hundreds of people every day and she remembers their names and what they eat. That’s a huge accomplishment.”

Ruth has frosted hair and two grandbabies and every weekday she’s behind the sandwich bar, filling up hungry high-jumpers and ravenous running backs, satisfying the hunger pangs of pitchers and catchers, liberos and linemen, bowlers and sharp shooters and all of their coaches.

All of them know her name, too.

“She’s just so friendly, everyone knows about her,” says Kenzie Maloney, a freshman defender on the volleyball team who has just ordered The Blueberry, a concoction Ruth helped dream up. (And yes, there’s a sandwich named The Ruth on the board, alongside the Italian, the Junebug and the Barney.)

Ruth came to the training table nearly a decade ago, starting in salads.

She loved it because she could be out on the floor, filling the lettuce and topping off the cherry tomatoes, talking to the students.

When her boss asked her to take over sandwich-making, she said sure. But only if she could still have facetime with her customers.

“Anybody can make a sandwich,” says Ruth. “But it’s the interaction that I love. I just like that one-on-one contact with people.”

She loves her job, even the morning hours filled with prep work, but her highlight comes during the noon rush.

“When I see those kids come through the door, it’s a real bright spot in my day.”

Names have always been important to the pastor’s wife from New Sweden, Maine.

Ruth and Mike met at a tiny bible college, married in 1975 and started a ministry together, arriving in Lincoln in 2006.

Mike was never good with names, so Ruth made sure she knew their parishioners by heart -- and when she came here, it seemed just as important.

“Kids always ask me, 'How do you remember?' I don’t know. I just know if I forget someone’s name, it bothers me.”

Tatum Edwards and her twin sister, Taylor, met Ruth shortly after they arrived from California to play softball, and she never forgot their names.

“Literally, every day we talked to her,” says Tatum, now a graduate assistant for Husker softball. “She became kind of like a family member.”

When the softball players were asked to bring a faculty member to a game to honor them, Tatum invited Ruth. “She was the first person who stood out in my mind.”

The first time she met Aaron, the sandwich lady looked puzzled. She wanted to know how to tell him apart from Nate.

Once, someone told Ruth she was “nosy” asking the students their names, asking about their lives. That hurt her feelings a little bit. You’re not nosy, one of the coaches assured her. You’re interested.

She is interested. She likes the athletes, she doesn’t see them as pampered. She sees them as young people under pressure, many of them far from home.

“My kids are far away, I would like someone to do that for them. Besides, when I see them come in with their headphones on, I know they don’t want to chat.”

A pole vaulter who wants the Italian, add salami.

“I was thinking about you before I got to work,” Ruth tells the freshman. “I was trying to remember your name.”

Cindy Lange-Kubick: Doing 80 down an ice-covered track on an $8,000 glorified skateboard

Cindy Lange-Kubick: A 42-year love affair for Gigi and the golden arches

Before Chicken McNuggets, there was Gigi.

Cindy Lange-Kubick: Shoes in memory of Miles, a baby with a broken heart

Cindy Lange-Kubick: Making a solid case for the proper use of concrete, Sept. 2, 2016

Ruth Hood, who has worked at the Husker training table for 10 years, builds sandwiches during the lunch rush on Friday.

Ruth Hood knows the names of students she serves at the Husker training table.