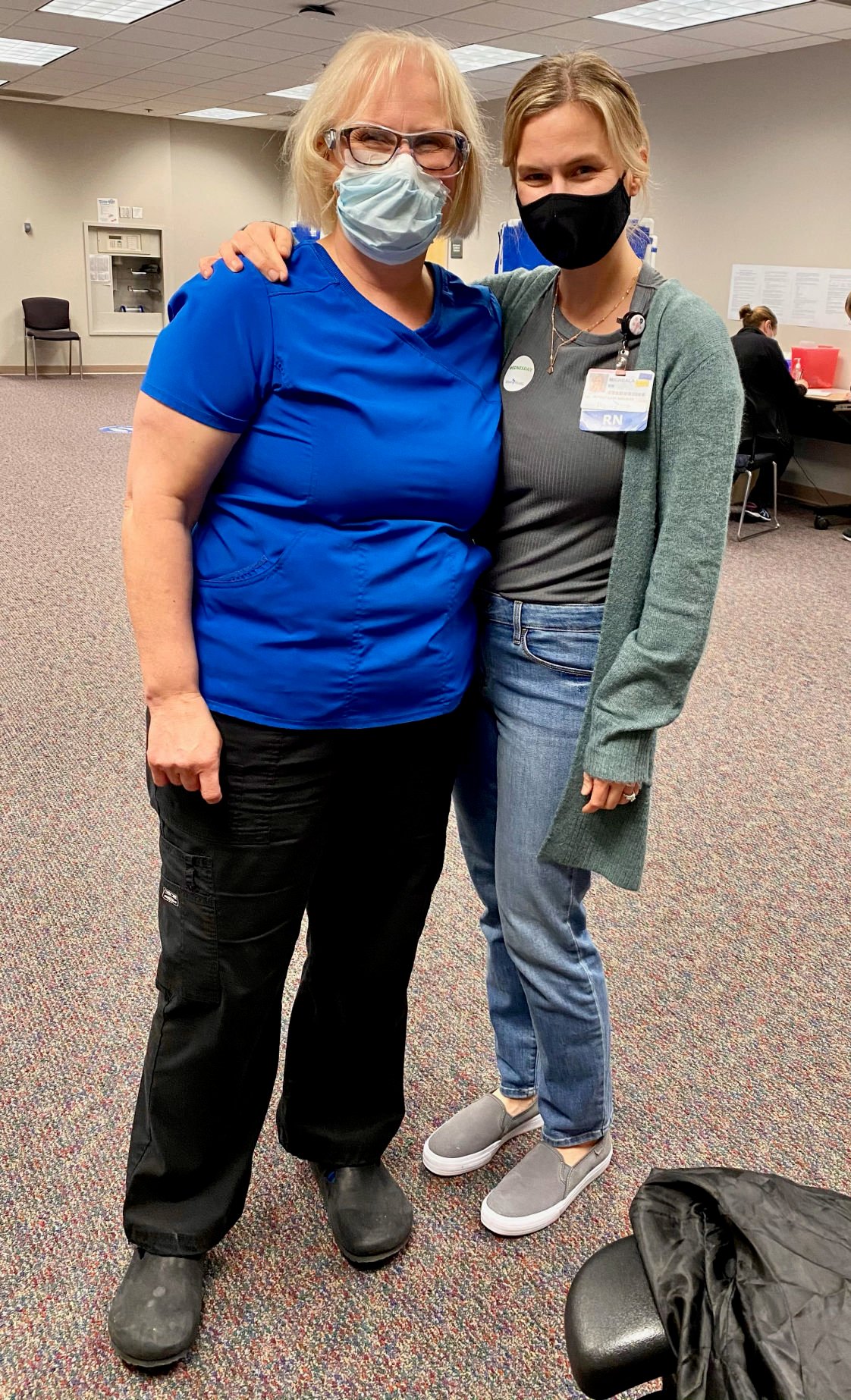 Carla Pinneo (left) and her daughter Micheala Lozano are both nurses at Bryan East Campus. Wednesday, the pair happily lined up for their COVID-19 shots.

Carla Pinneo (L) and her daughter Micheala Lozano are both nurses at Bryan. Here they are in a pre-pandemic time having lunch at the Hub Cafe. Wednesday, the pair happily lined up for their COVID-19 shots. 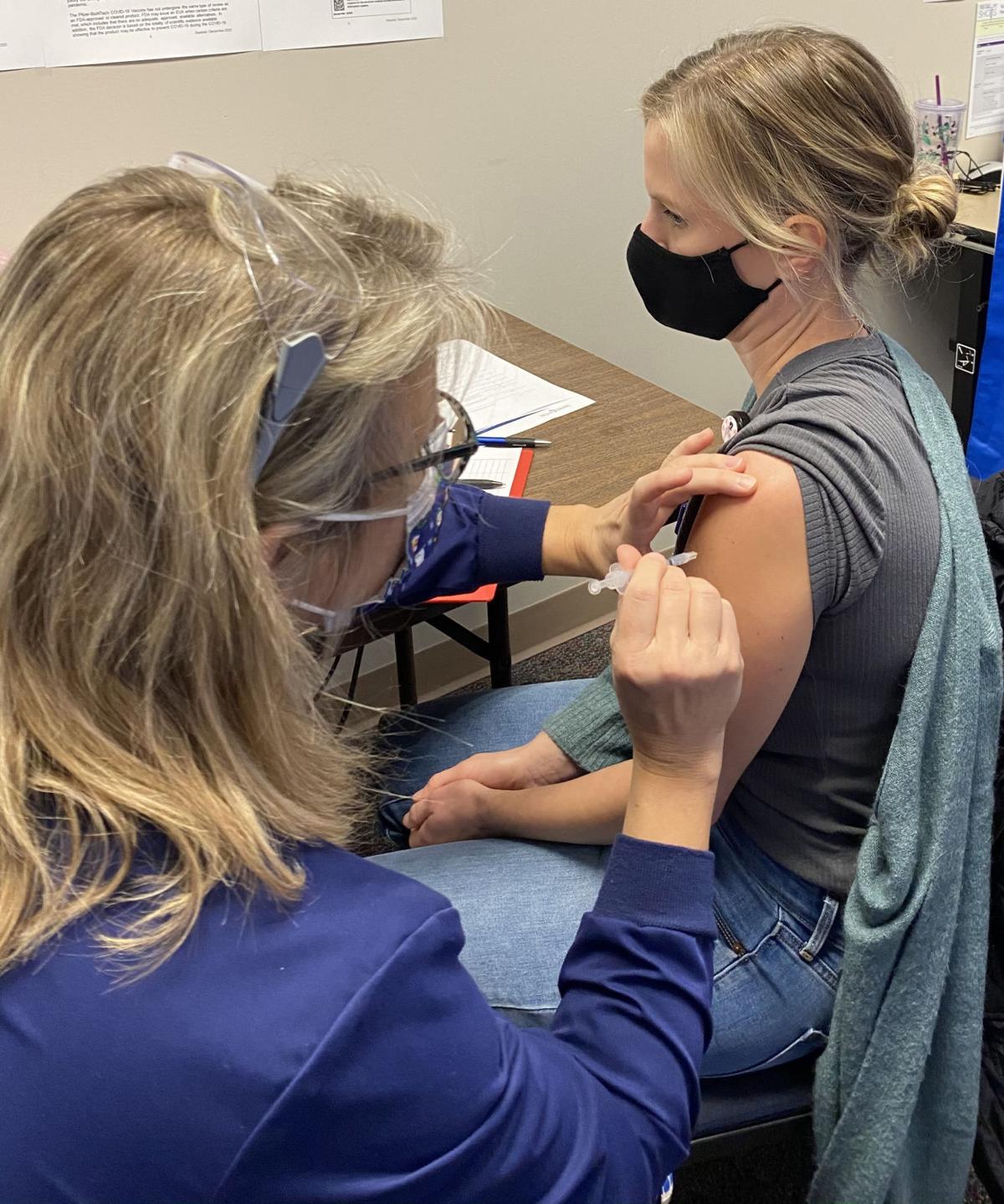 It only took a minute.

The daughter went first — just after lunchtime Wednesday — and then it was her mom’s turn.

It felt like a flu shot, Micheala Lozano said.

The cold of the alcohol swab and a painless poke, followed by a slightly sore arm the next day.

“That’s the only discomfort I have," said Lozano, 35, a registered nurse at Bryan East Campus.

The mother of two works part-time at the hospital on 48th Street, filling in as needed on 12-hour shifts in postpartum, tending to moms and babies.

Her mom is an RN at Bryan East, too. Carla Pinneo started her 37-year career in the ICU and spent 20 years in recovery rooms before moving into mental health.

She works in the ECT Clinic, seeing outpatients mostly, starting IVs and making sure patients are stable before they are sent home.

Before the pandemic, they saw each other two or three times a week. They scheduled play dates with Lozano’s 6-year-old daughter Stella. Trips to the zoo and to movies, lunches out.

Lozano is the second of four girls in her family. Her oldest sister lives in Arkansas, one of thousands of would-be brides who have had to postpone their weddings. The family couldn’t be together to celebrate her doctorate in November.

They’ve spent most of the last nine months apart, like the rest of us.

“So many people have had it so much worse,” Lozano said. “People not being able to pay their bills, losing jobs, losing loved ones.”

They had a Zoom Thanksgiving, spiced up with a “Guess who picked this song?” playlist. (Lozano went with “Yummy” by Justin Bieber, and Mom picked William DeVaughn’s “Be Thankful for What You Got.”)

And there will be a Zoom Christmas, too. (Last week, the sisters and their mom had a Zoom ornament-making party.)

They are making do.

But after Wednesday, and the arrival of a vaccine in Lincoln, they can see a glimmer of what lies ahead.

“There’s been so much stress all around at the hospital,” Lozano said. “You could feel it when you walked in; now, the whole mood has changed.”

Cindy Lange-Kubick: 'If they’ve never been in the situation we are in they don’t know how bad it is'

It’s like people can finally see ahead, she said. See that this isn’t going to last forever.

Everyone knew the vaccine was coming to the hospital. On Sunday, Lozano got a text, letting her know she was eligible.

She took a screenshot and added a bunch of happy emojis and sent it out on the family thread. She called her mom: Are you going to do it?

Mom was in. So they got online and signed up, one right after the other. They filled out a health questionnaire, got their vaccine cards and a little yellow sticker to put on their employee ID cards: 12/16/2020.

Both nurses had the following day off, and Pinneo felt fine, not even an ache in her arm.

She did feel a twinge of guilt, though.

“I just wish it would be available to everyone all at once.”

The vaccines are rolling out in waves. Nebraska got thousands of doses in the first week of distribution, and more are on the way.

Health care workers are at the top of the list and Bryan has already administered 2,000 doses.

Last week, Gov. Pete Ricketts said that anyone who wants a vaccine should be able to get one by April.

But that’s a long winter away for some.

Cindy Lange-Kubick: A popular holiday market pivots in the time of coronavirus

“We both feel so privileged to get this vaccine, when we know so many in the community are anxious to get it, too,” Lozano said.

Lozano has filled in on the COVID unit. She wears a mask and protective goggles as she tends to moms and babies. Through most of the pandemic, birthing moms have been able to have only one designated visitor for their entire stay.

“That’s been hard on people,” Lozano said. “Patients are not staying as long; they’re asking to leave as soon as they can.”

It’s been hard on the patients who come for electroconvulsive therapy, too, Pinneo said.

“Some of them have been too scared to come to the hospital. Some are coming more frequently, because their symptoms have gotten a lot worse.”

The mother and daughter nurses will return — together — for their second dose of the Pfizer vaccine in three weeks.

Both trust the science behind the shot.

Both have witnessed a pandemic — the Code Blues, the weary faces of staff and of worried patients.

And like all of us, the ache of not being close to the people they love for so many months.

Lozano became a nurse because of her mom. Pinneo was diagnosed with breast cancer when her second daughter was a senior at Lincoln High. Lozano remembers helping tend to her as she recovered, feeling the reward of that care.

When it’s safe, that daughter knows just what she wants from her mom.

“Definitely like just a big hug,” she said. “Really hug her.”

When Gerayne Yelkin was offered to care for a 15-month-old quadriplegic and ventilator-dependent toddler, she wasn't sure if she was prepared for the task ahead. Now 28 years later, both nurse and patient are happy Yelkin said yes.

Some recipients may experience minor allergic reactions and a few cases of Bell's palsy are being investigated now. But that's all, Dr. Kevin Reichmuth said.

His Lincoln High graduation photo hangs on the wall inside Lighthouse and this holiday season, Aroun Phaison, 39, figured it was time to say thank you.

Health Department officials identified the two deceased residents as a woman in her 70s who was in a long-term care facility and a man in his 80s who was hospitalized, the department said in a news release.

Two families met on an ICU unit in late August and both left without their loved ones, but a surprise visit from the widow of LPD Investigator Mario Herrera and three others helped brighten the lives of a Logan County family.

On Monday, Santa Claus visited a house filled with crafty and giving children. Children whose parents taught them this -- that what they have, they give. That giving comes back around. That they are rich with love and friends.

A 13-year-old Lincoln boy who likes to write decided to put out his own newspaper when the pandemic started. He's on issue 72 and going strong.

So the name is a head-scratcher — unless you're Swedish — but the arts and community-building nonprofit founded by two Lincoln women is the real deal.

Columnist Cindy Lange-Kubick unveils her annual book list — the good, the bad and the novels dropped in the bathtub.

Luke Moberly, 19, came up with a holiday-helping idea as part of his entrepreneur program homework. The good elf deeds helped the tech-challenged and Make-A-Wish, too.

Nurse Practitioner Melanie Householder is one of hundreds of health care workers swabbing Nebraskans for COVID-19, including this columnist, who has become her biggest fan.

The tragedy of isolation during the pandemic played itself out over and over again across the country, including for the Stull family of Lincoln as they watched their mother decline and agonized over not being able to touch and hold her family.

Carla Pinneo (left) and her daughter Micheala Lozano are both nurses at Bryan East Campus. Wednesday, the pair happily lined up for their COVID-19 shots.

Carla Pinneo (L) and her daughter Micheala Lozano are both nurses at Bryan. Here they are in a pre-pandemic time having lunch at the Hub Cafe. Wednesday, the pair happily lined up for their COVID-19 shots.