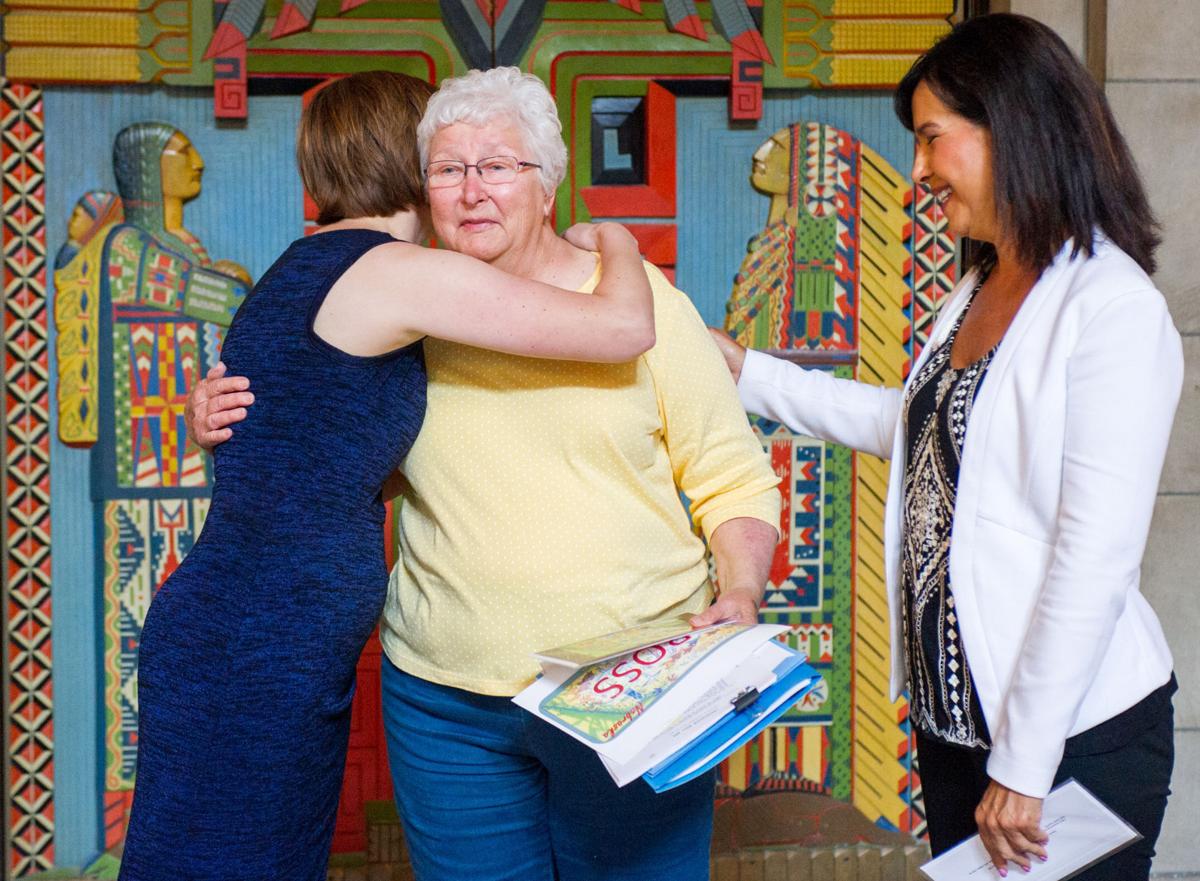 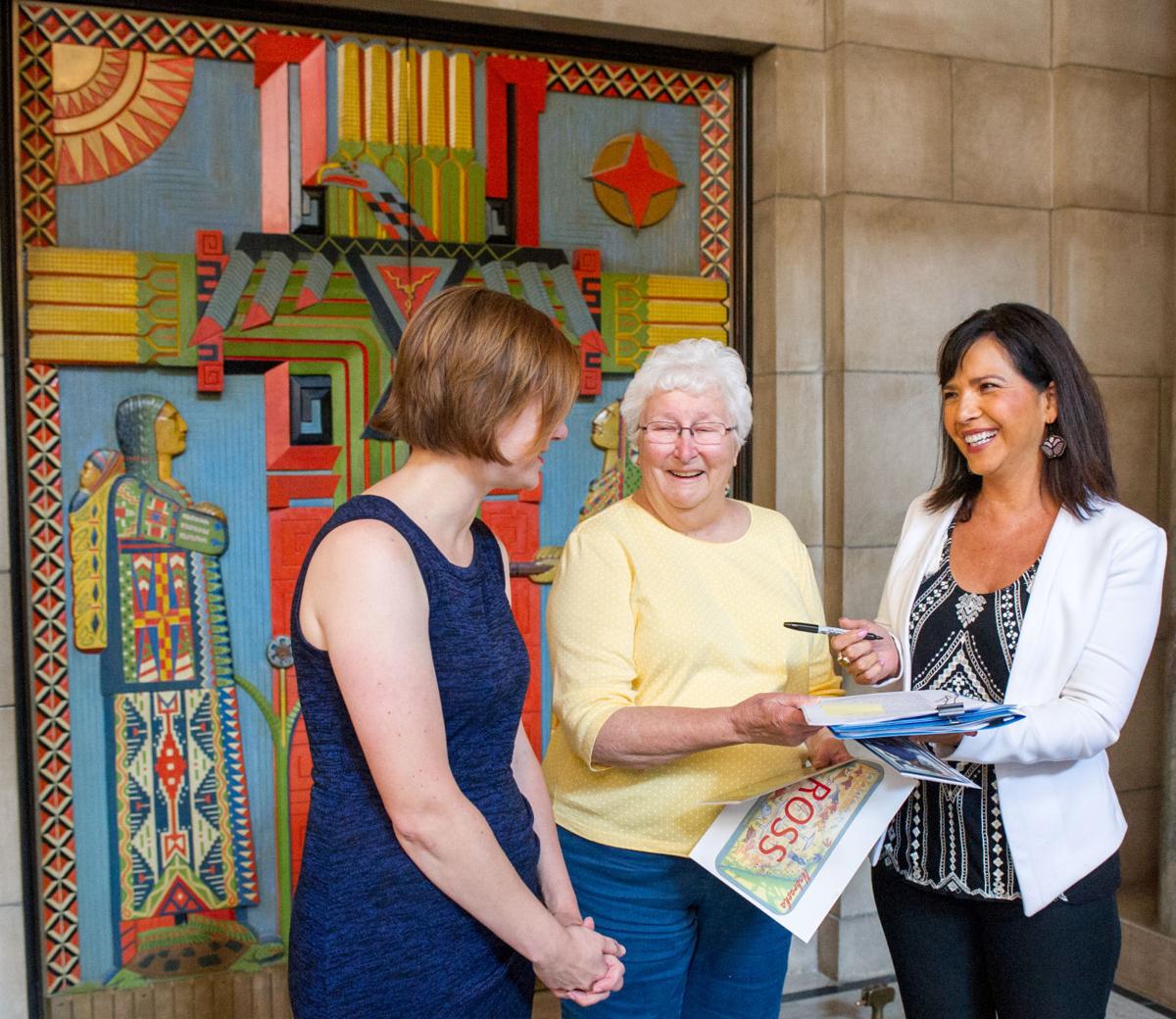 State Sen. Kate Bolz, Willa Smith and Judi gaiashkibos sign a proclamation on Wednesday at the Capitol for a Native American license plate that was championed by Smith's late husband Ross. 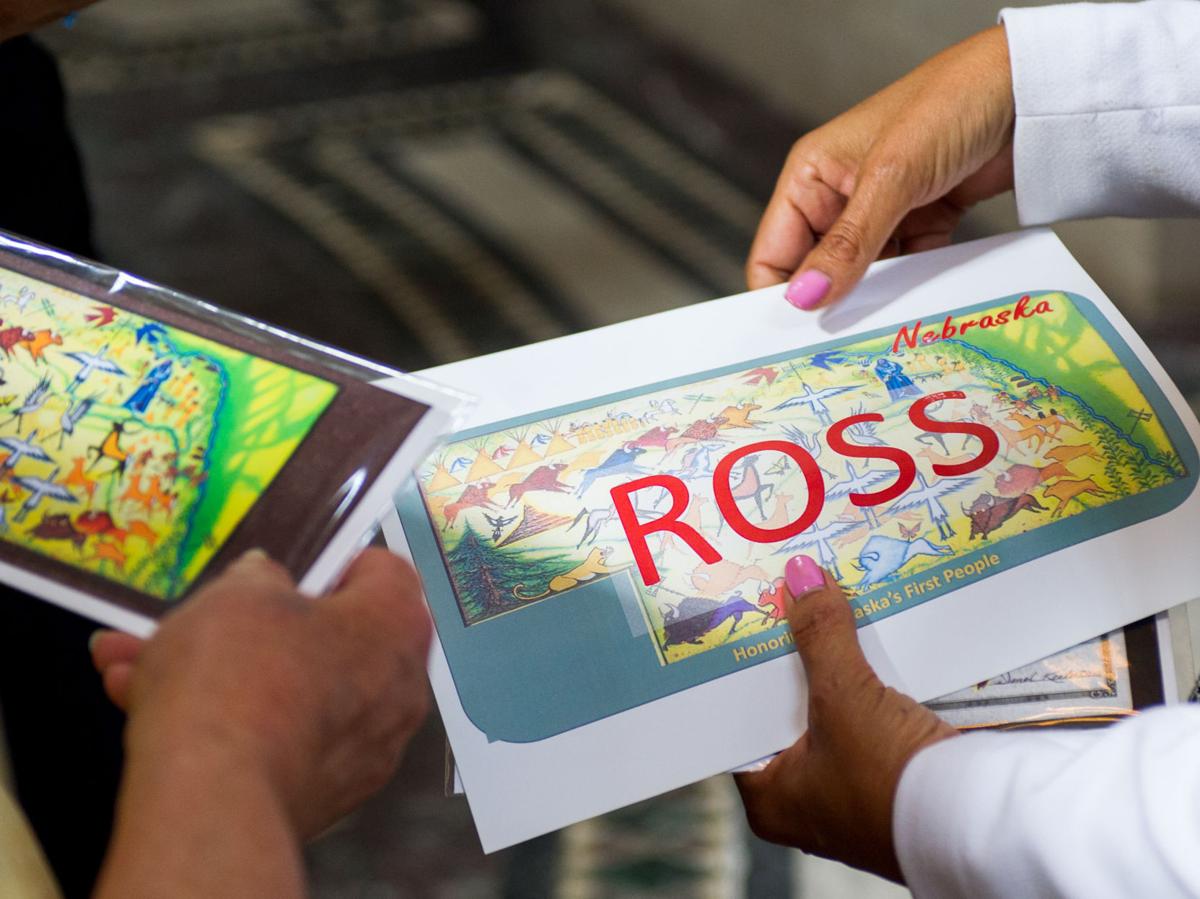 Willa Smith and Judi gaiashkibos look over mock-ups of a Native American license plate that recently made its way through the Legislature. 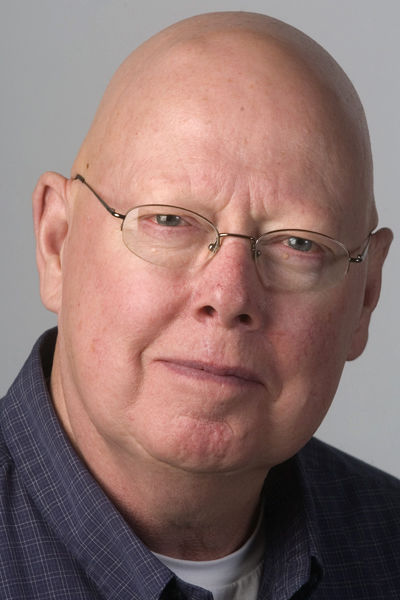 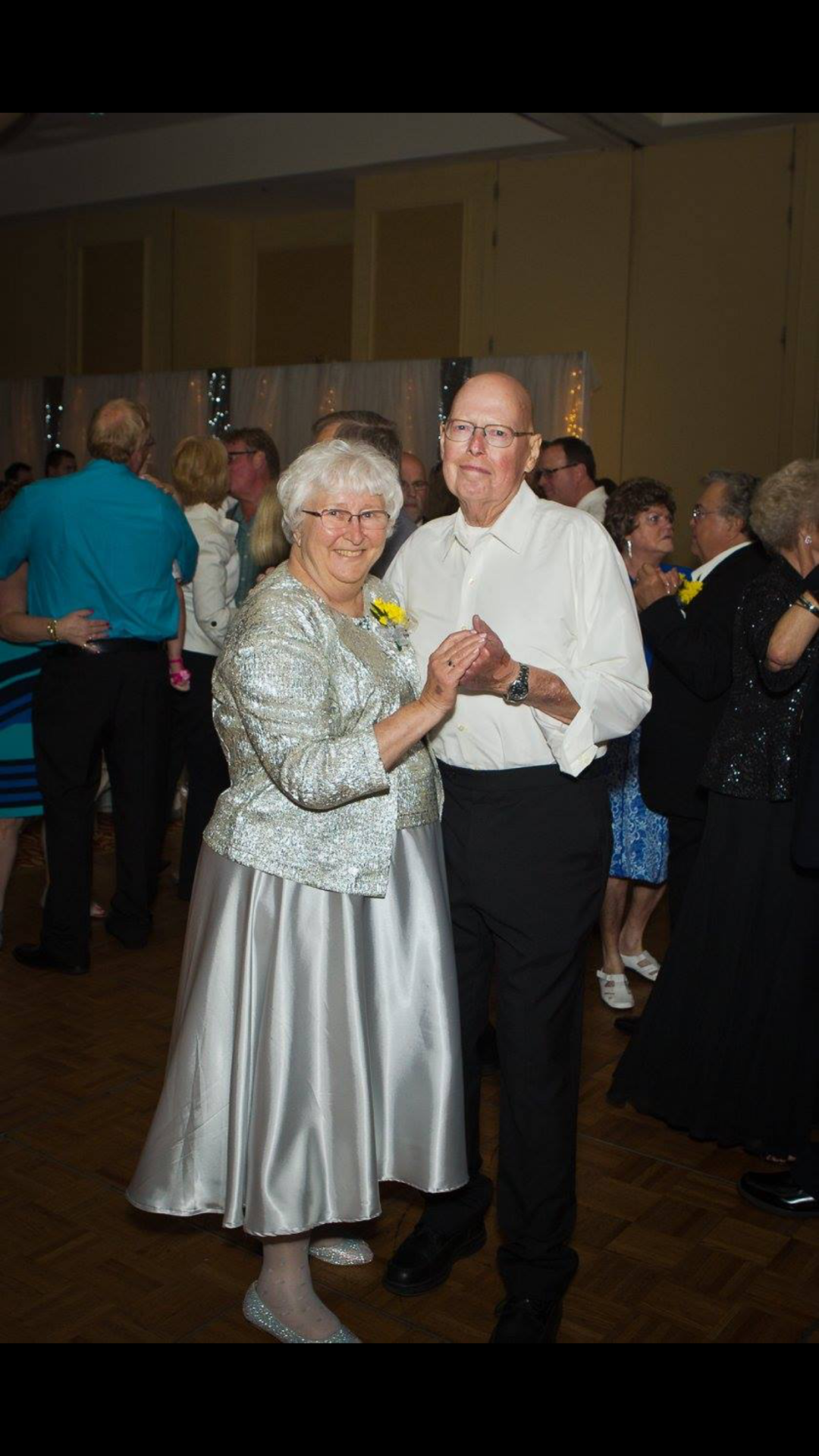 Ross and Willa Smith dancing at a wedding.

Wednesday, six months after Ross Smith died of pancreatic cancer, his family gathered on the north side of the Capitol and walked up the stairs and into Room 1015.

She handed her a copy of LB263, the 2017 transportation bill, where — folded into its many pages — one of Smith’s last wishes came true.

A license plate to honor Natives.

“My dad didn’t have a drop of Native American blood in him,” said his youngest daughter, Shawnie Motschenbacher.

Added his oldest daughter, Shereen Mills: “But knowing my dad, it was like, ‘What about the Native Americans? They were here first, we should honor them.’”

Bolz was out campaigning in 2012 when she first met the man behind the license plate bill, Willa at his side.

“I knocked on their door and asked for their vote,” Bolz says. “They invited me in and introduced me to their dog, Ginger, and gave me a bottle of water and just like that we were friends.”

Smith even put up yard signs for her, happy as a clam.

Then a year ago, he knocked on her door at the Capitol with an idea for a vanity plate.

He visited Judi gaiashkibos, executive director of the Nebraska Commission of Indian Affairs, seeking her input and blessing.

“I got the sense he wanted to do something to set the record straight,” gaiashkibos said. “He was very respectful.”

He went to see Tom Brewer (the Legislature’s only Native member) and knocked on Ernie Chambers' door (a skeptic of vanity plates). They got behind the idea, along with Lincoln Sen. Patty Pansing Brooks.

“We made a persuasive little team,” Bolz said.

When Smith got too sick to work on the bill, his friend Gary Hughes carried on.

“He was a good man,” Hughes said. “He believed in what he was doing, whatever direction that took him in.”

The two men met at First Presbyterian Church where, among his many duties, Smith drove the van to pick up Sudanese families for services.

He volunteered at the alopecia group, locally and nationally, after he was diagnosed in the 1970s. (“He was bald before bald was cool,” his youngest daughter said.)

He was a hospice volunteer at Tabitha. He helped run a men’s grief group there.

He delivered Meals on Wheels twice a week.

He drove cancer patients to the doctor, part of the American Cancer Society’s Road to Recovery program.

Even after he was diagnosed with cancer, he drove cancer patients.

If you were new to Lincoln and didn’t have a place to go for the holidays, you had a place at the Smith table.

Her father had a 25-year career in life insurance before getting his master’s degree and starting a mid-life career as a vocational counselor for the next 25 years.

“He wasn’t a salesman. He hated the selling part of selling life insurance.”

But he knew the importance of planning.

Smith lived more than two years after his cancer diagnosis.

When he began working on the Native license plate bill, no one in his family knew what he was up to.

“It was like, ‘Wow, Dad,’” Motschenbacher said. “To find out it passed after he died was really great.”

And it was pretty great at the Capitol on Wednesday afternoon, as grandkids and daughters and sons-in-law filed out of Room 1015 and walked up the marble steps to the Rotunda.

Under that great domed ceiling, Judi gaiashkibos waited with copies of two license plate designs, both from a Native artist from Omaha, both with the same three words embossed along the bottom: Nebraska’s First People.

The state will make the final design decision and the plates will be made available in January, she told the Smith family.

“We really owe Ross a great debt of gratitude,” gaiashkibos said. “He wanted the world to right the wrongs. He’ll live on through this.”

His widow gasped at the first prototype, an outline of Nebraska colorful and covered with buffalo and teepees, Standing Bear and Sandhill cranes and, in the center where the plate number would appear, four red letters: ROSS.

Her next license plate, Willa Smith said, but with one small change: 4ROSS.

Cindy Lange-Kubick: A dad with infinite patience and an endless well of love

When you ask the daughter about her dad, she pauses.

Cindy Lange-Kubick: Eclipse chaser coming to Lincoln to help us embrace our moment (without) the sun

On her Facebook page, the world-traveling, eclipse-chasing Aussie living in Northern Ireland has given her Lincoln talk a name.

Cindy Lange-Kubick: Abiding grief and the search for gratitude

Rosanne Liesveld didn’t worry about grammar and she didn’t fix her spelling.

Audubon leader Marian Langan: 'All who knew her will truly miss her'

The tallgrass prairie lost one its biggest fans -- and fiercest advocates -- last week.

Cindy Lange-Kubick: The scientist and eternal optimist on climate accords and melting ice

Charles Stephen was a connoisseur of words and ideas.

Cindy Lange-Kubick: Living in the land of opportunity, grabbing the apple called America

Thanh Le tells his story 30 minutes at a time, one morning after another, sitting in the front office of his shop on Q Street.

Cindy Lange-Kubick: Super Saver and beyond — one man's walk across America

Jonathan Heil likes to walk and so he quit his grocery store job, bought a bus ticket to Delaware and started off across America in a pair of …

He called her madre and she called him Matthew — even though almost everyone else shortened it to just plain Matt.

Cindy Lange-Kubick: 'I was raised on the gospel of white superiority'

Judy Daniell moved 17 times in her first 13 years, from trailer park to crummy apartment to trailer park in the South.

A new hand has taken the helm at the Lincoln Indian Center.

Mountain lion license plates have clawed their way to the top

This story started on Capitol Parkway, with one passing Prius, then another right behind it.

Long before Donel Keeler saw his art staring back at him from the bumpers of automobiles, he saw it hanging in Morrill Hall and earning prizes…

State Sen. Kate Bolz, Willa Smith and Judi gaiashkibos sign a proclamation on Wednesday at the Capitol for a Native American license plate that was championed by Smith's late husband Ross.

Willa Smith and Judi gaiashkibos look over mock-ups of a Native American license plate that recently made its way through the Legislature.

Ross and Willa Smith dancing at a wedding.