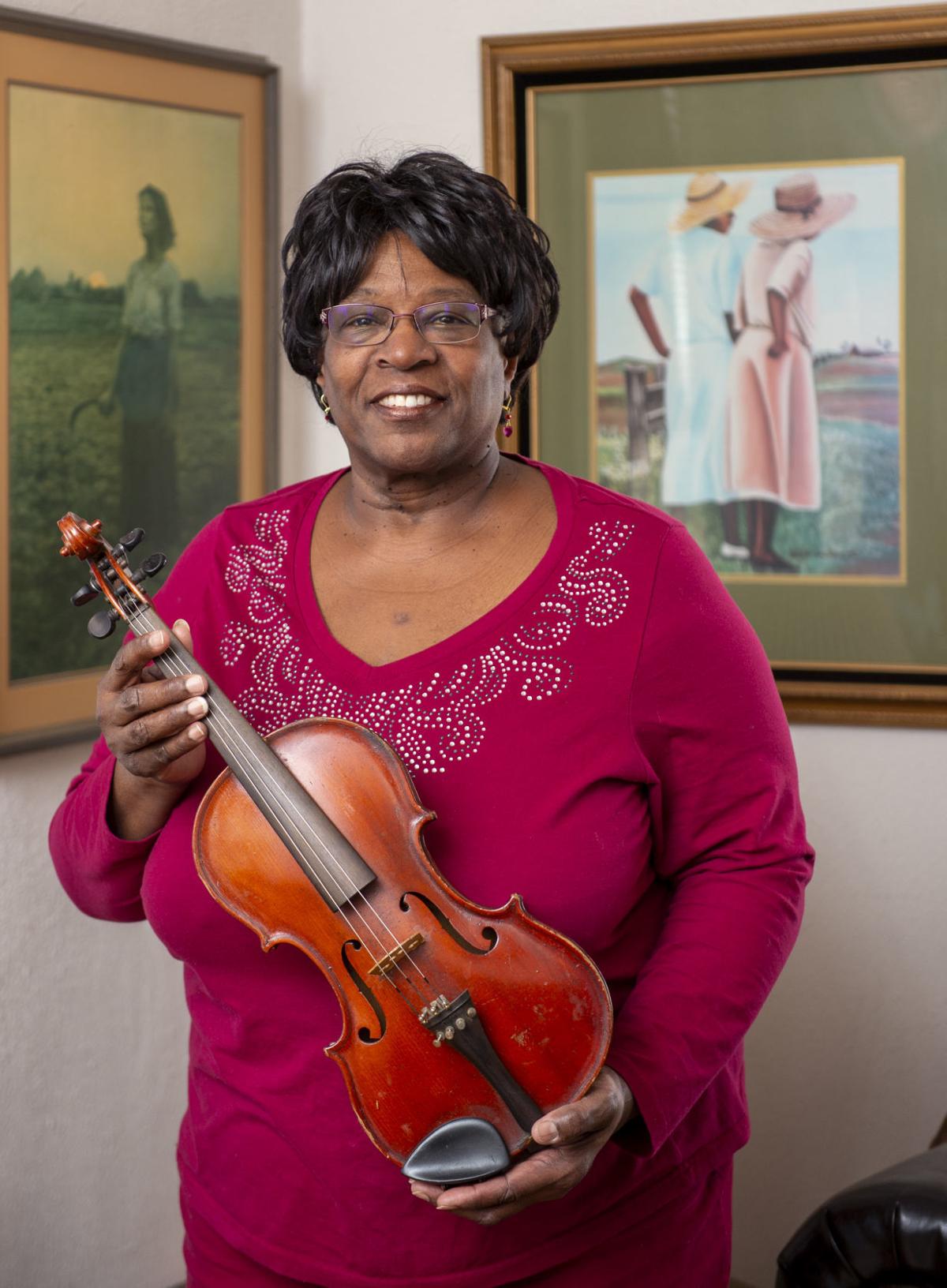 Karen McWilliams holds a violin passed down from her mother, who played it in the 1930s, followed by her, her brother and her sister. The violin hangs on the wall in McWilliams' home because, she said, her mom would want it shared with others. 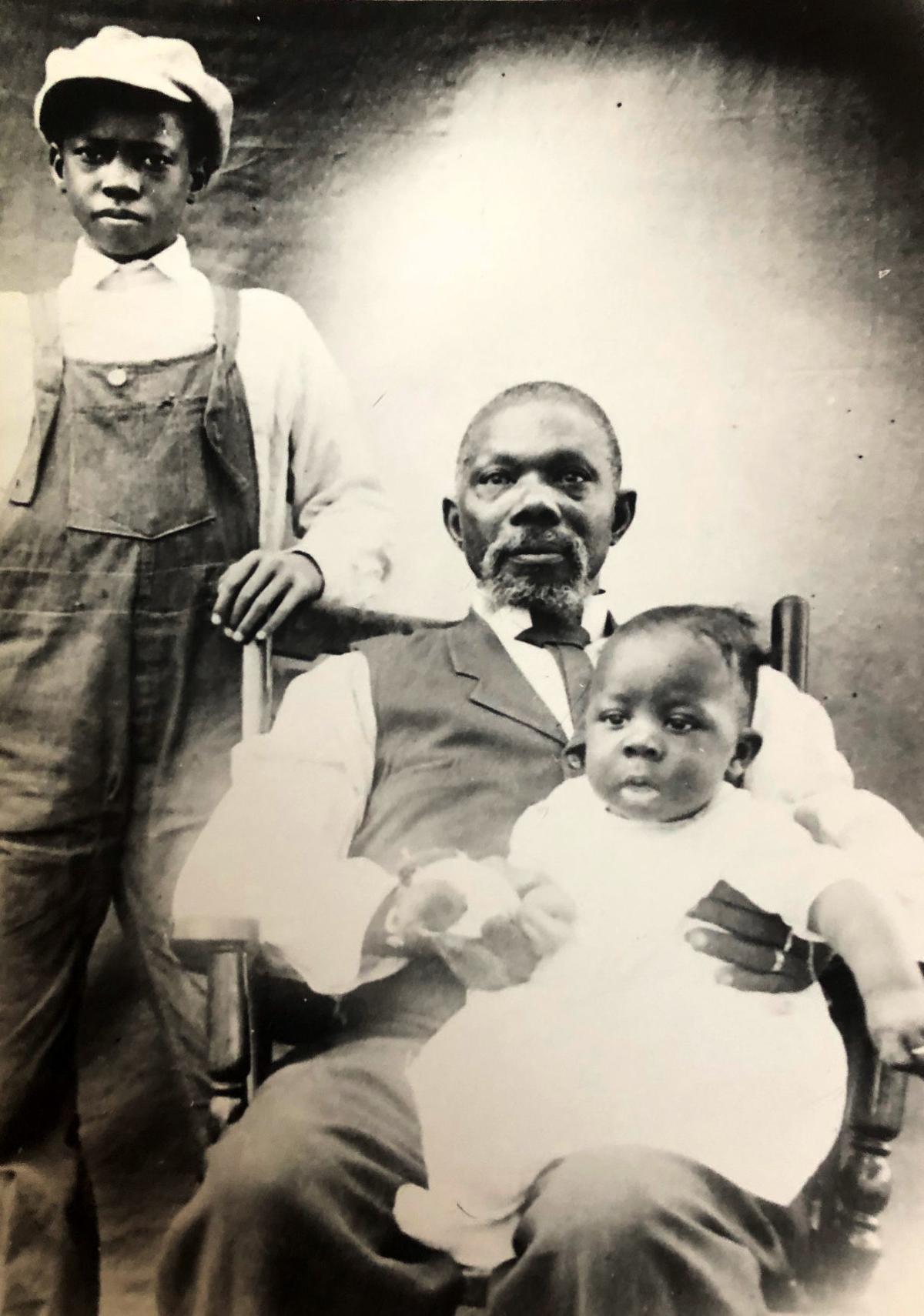 John Jefferson McWilliams holds one of his grandsons on his lap. 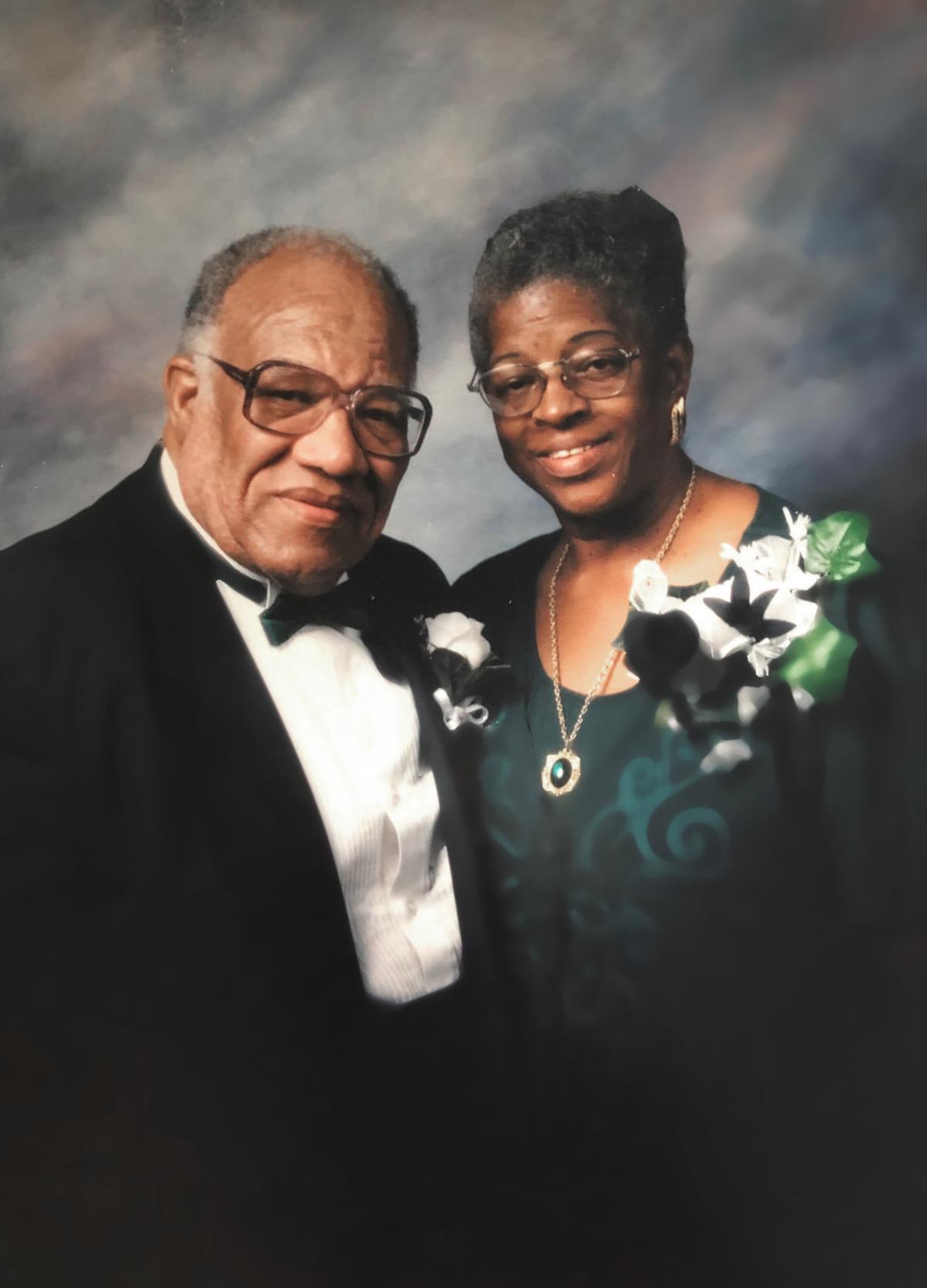 The Rev. Kendall and Theresa McWilliams, parents of Karen McWilliams. 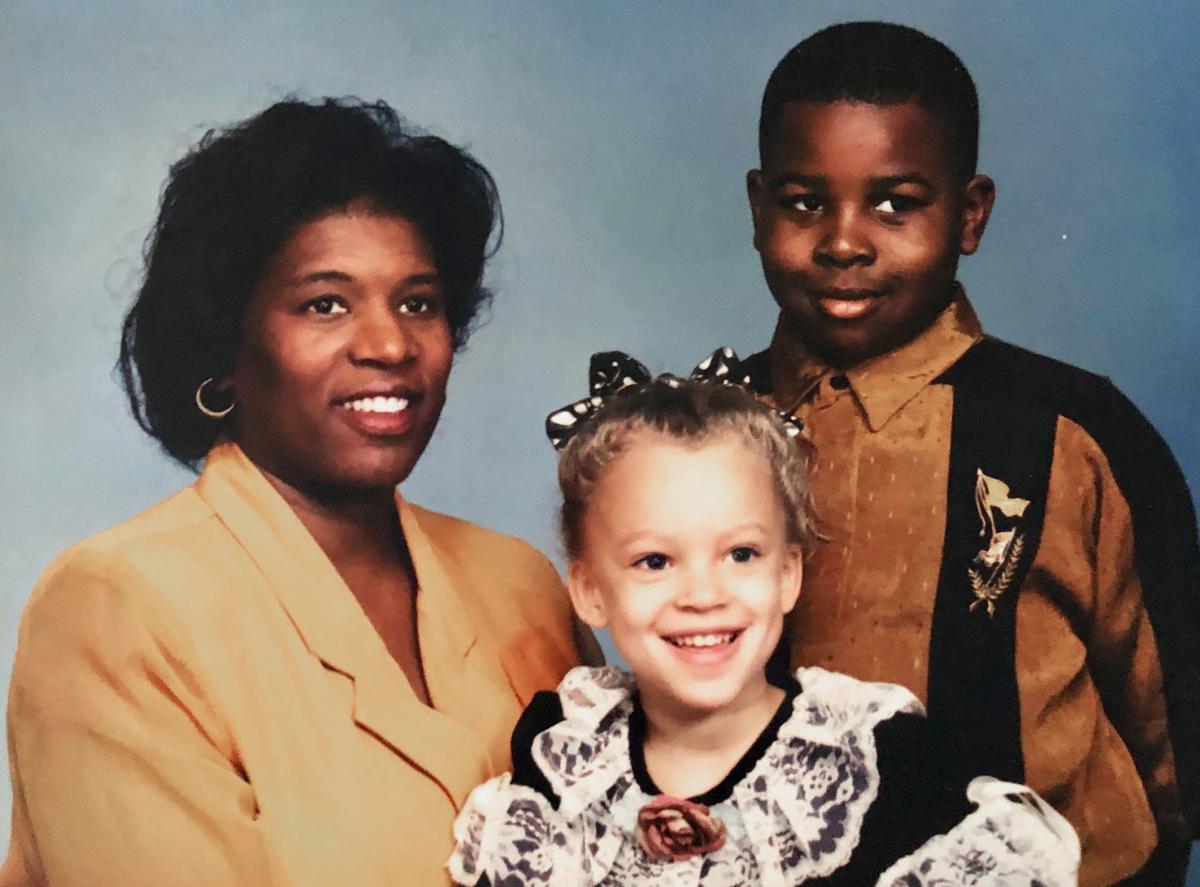 Karen McWilliams with her children Brandon and KeeAira in 1994.

The first time she took the cemetery tour, Karen McWilliams was searching for another grave and missed the moment.

The second time, the tour guide didn’t mention the grave at all.

So she tried again and this time, Ed Zimmer — Lincoln’s historic preservation planner — stopped in front of Wyuka’s Soldier’s Circle and the resting place of her ancestor and told his story.

John Jefferson McWilliams, a slave who fought for the Union Army, came to Lincoln with his wife, Sarah, after Reconstruction, both of them ordained ministers who started the city’s first integrated church.

That’s where her history here started, she says.

She laughs, telling the story.

“Ed Zimmer knows my family history better than I do.”

McWilliams is sitting in her living room in the middle of Lincoln, the house where she raised her son and daughter.

The retired teacher is holding a fat binder on her lap, pieces of her family’s past inside. Old photographs and newspaper clippings. Marriage and death certificates. Church bulletins and deeds.

History is all around her, too. The paintings of a long-gone relative, a violin passed down from her mother, a portrait of Kendall and Theresa McWilliams — her parents who raised nine children and spread their love to 90 more as foster parents.

“We had kids who were blind, who were in wheelchairs, anyone who needed a home on a temporary basis.”

Passing all this along is important to her, she says. Sharing her memories with her loved ones and her church and her community.

The McWilliams family goes back six generations in Lincoln, historian Zimmer says. And within it is a strong line of stewards, like Karen, who work to keep the history of those many branches alive.

Brandon McWilliams says his mom is their branch’s bridge-builder.

“She likes to help us understand where we came from, who we are. How we can move the McWilliams name into the future.”

It makes her emotional, the mother says.

“I get teary-eyed thinking about the people who have gone before us and paved the way for the life we have now.”

She starts telling the stories from inside the binder.

The story that goes with John Jefferson, born in 1843, how he set out for Nebraska with his wife and children.

“His master asked him, ‘What makes you think you could make a living being free?' and he answered, ‘I’m taking care of both your family and mine right now.’”

She tells the story of John and Sarah’s grandson, Trago T., and the story of his son, Trago O. — the McWilliams men who pastored at their church, Third Christian — later Christ Temple Mission — in the days before her father’s own ministry there.

Like the leaders before him, Kendall McWilliams worked a day job to feed his family.

“Daddy was a welding instructor at Southeast Community College,” she says. “He was sent to the penitentiary to teach welding there.”

He led Bible study at the prison each Monday night and at the Lincoln Correctional Center on Wednesdays.

She tells the story of her grandmother, Ruth Elizabeth VanDerZee, a concert pianist who graduated from the Cotner School of Music, whose daughters became jazz pianists in California.

And Aunt Anna, who went to the Tuskegee Institute for teacher training, and Aunt Alice, who had more than 100 piano students.

She points to the piano in the corner and to the violin on the wall, that love of music passed down.

She talks about Ruth Cox Adams, her great-great-grandmother, the adopted and dearly loved sister of Frederick Douglass.

“What these people did, I don’t want them ever to be forgotten.”

Her son remembers hearing those stories as a boy. About the history of Trago Park and McWilliams Park and the wonder of Cox Adams and the famous abolitionist.

“My mom told me how we were related to her and how he called her his sister, and it was like, really? Really, we’re that close to the guy who made such a difference in history?”

His mom is a teacher at heart, he says.

“She wants to share that history so it doesn’t disappear.”

Sitting in her living room, McWilliams shares pieces of her own story, a teacher for 40 years at Calvert Elementary School.

What she’d tell her bossy fifth graders at school: You’re going to be a good leader.

How she loved her last years with the second graders: What could be better than to sit in a chair and rock and read to them?

She adopted Brandon and his sister when she was a single woman in her 30s, she says, because she loved children and had room in her heart to be a mother.

“She’s taken in so many people,” says her younger sister, Cynthia Mix. “She never knows a stranger.”

Mix called her sister a problem-solver and an organizer. Tutoring kids, teaching English, hearing about a problem and heading to help.

“She hears something, she sees something — she’s there.”

“I think my dad was that way, and she got that from him,” Mix says. “Lord bless ’em. I’m not a person who cares about history.”

Karen McWilliams laughs when she hears that.

It all started when she was a girl, she said, down in Kansas at a family reunion, her dad and his many brothers and sisters sitting down to reminisce.

“I looked at all these old people, and I went out to play hide-and-seek.”

And she lost her chance.

Then she tells another story about growing up, surrounded by Norman Rockwell and all those scenes of everyday white life.

Thinking: “Who was the Norman Rockwell who was going to keep track of what was going on in the African American community? Where is our history?”

She filled her home and her classroom with them.

She filled her walls and her photo albums.

That’s why she does her part. Why she’s the woman with the binder.

“I feel so privileged to be part of the McWilliams family,” she says. “Not only to be part of the spiritual tradition, the church and that history, but the tradition of giving back. It encourages other people to know that their lives are not just for that moment.”

Cindy Lange-Kubick: 'He’s defying stereotypes each and every time he interacts with people'

Stanford Bradley Jr. is making a difference in the lives of African-American youth in Lincoln by sharing his story, being himself.

The second family to receive the Lincoln High School Hall of Fame Family Award is the McWilliams family.

Serving in the Army during Operation Desert Storm is only the second most grueling thing Rachael Folds has ever done. The most grueling? Helping to raise more than 70 foster children, eight of whom she has adopted.

Nearly two years after the sister and brother arrived at their Lincoln home, a family is made official, but not without bumps in the road.

Karen McWilliams holds a violin passed down from her mother, who played it in the 1930s, followed by her, her brother and her sister. The violin hangs on the wall in McWilliams' home because, she said, her mom would want it shared with others.

John Jefferson McWilliams holds one of his grandsons on his lap.

The Rev. Kendall and Theresa McWilliams, parents of Karen McWilliams.

Karen McWilliams with her children Brandon and KeeAira in 1994.