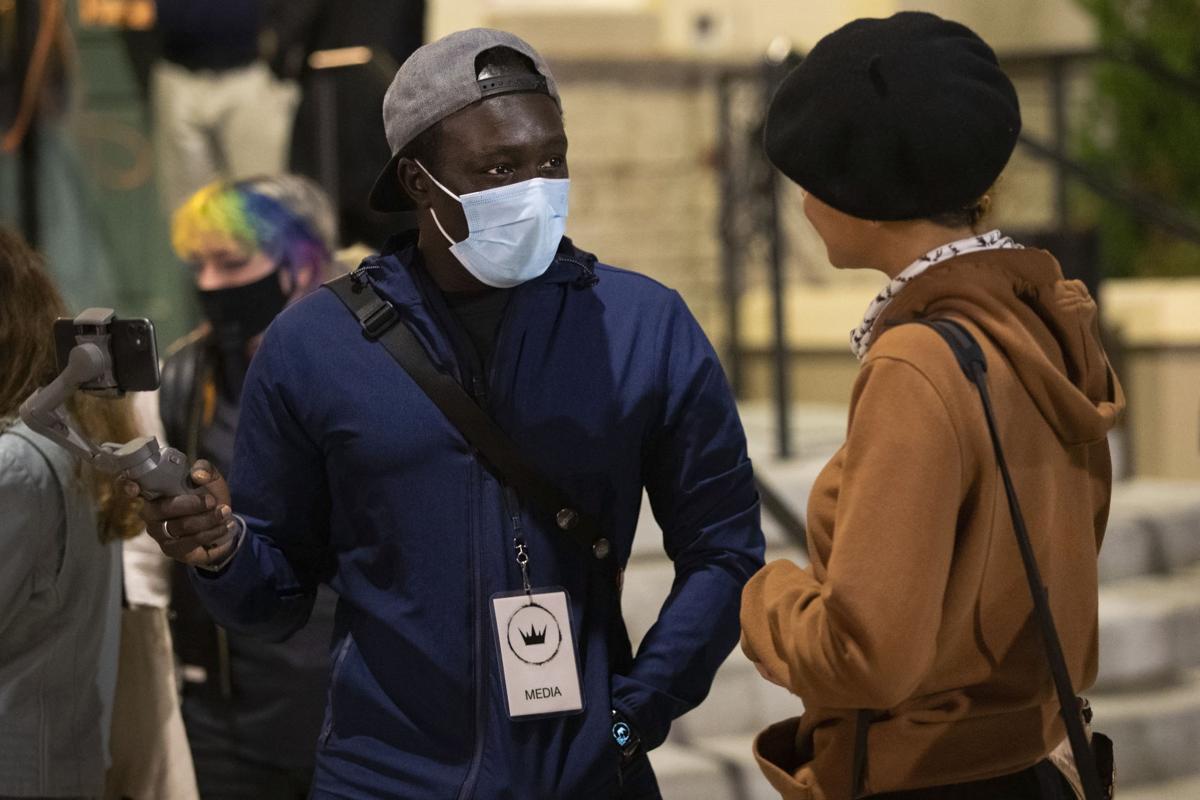 Jazari Kual (left) livestreams as he interviews New York activist Mercy Baez during the Stand UP Speak OUT March on Sunday in the Haymarket. Kual is an independent media producer who has gained viewers as he documented protests and marches in the area this summer. 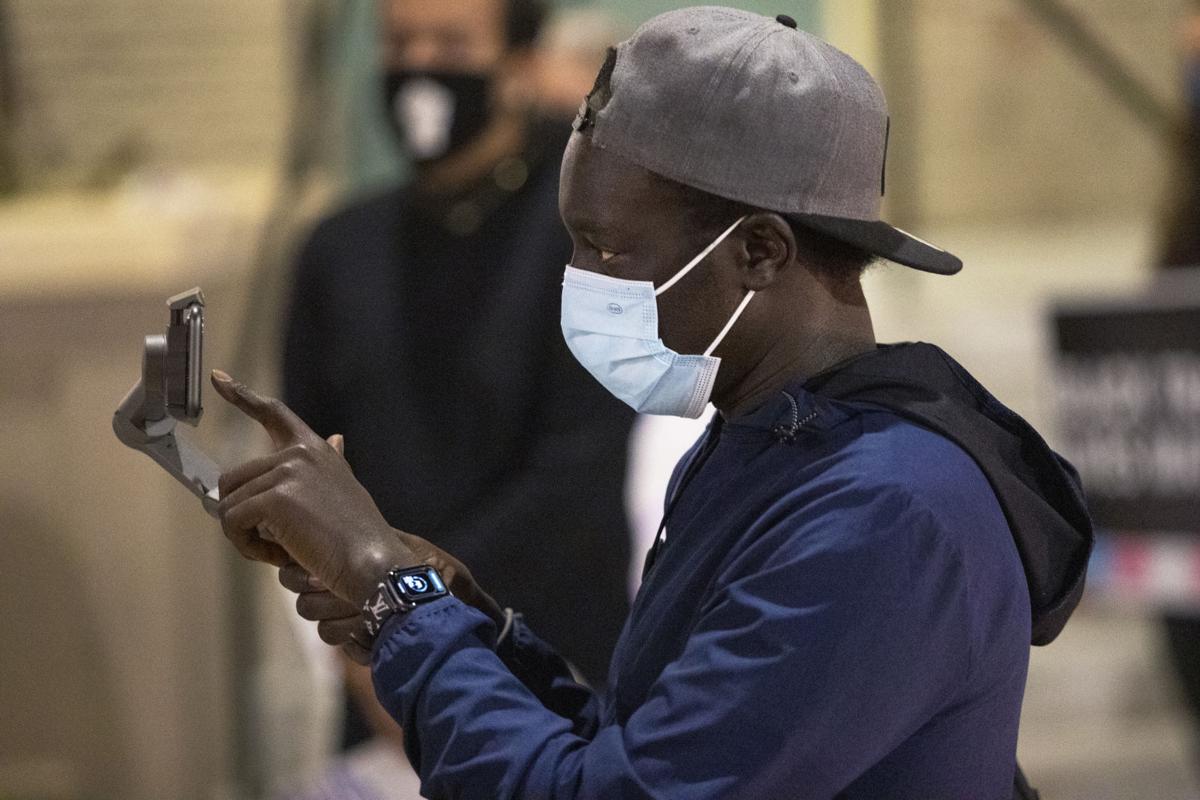 Jazari Kual livestreams the Stand UP Speak OUT March on Sunday in the Haymarket. Kual is an independent media producer who has gained viewers as he documented protests and marches in the area this summer. 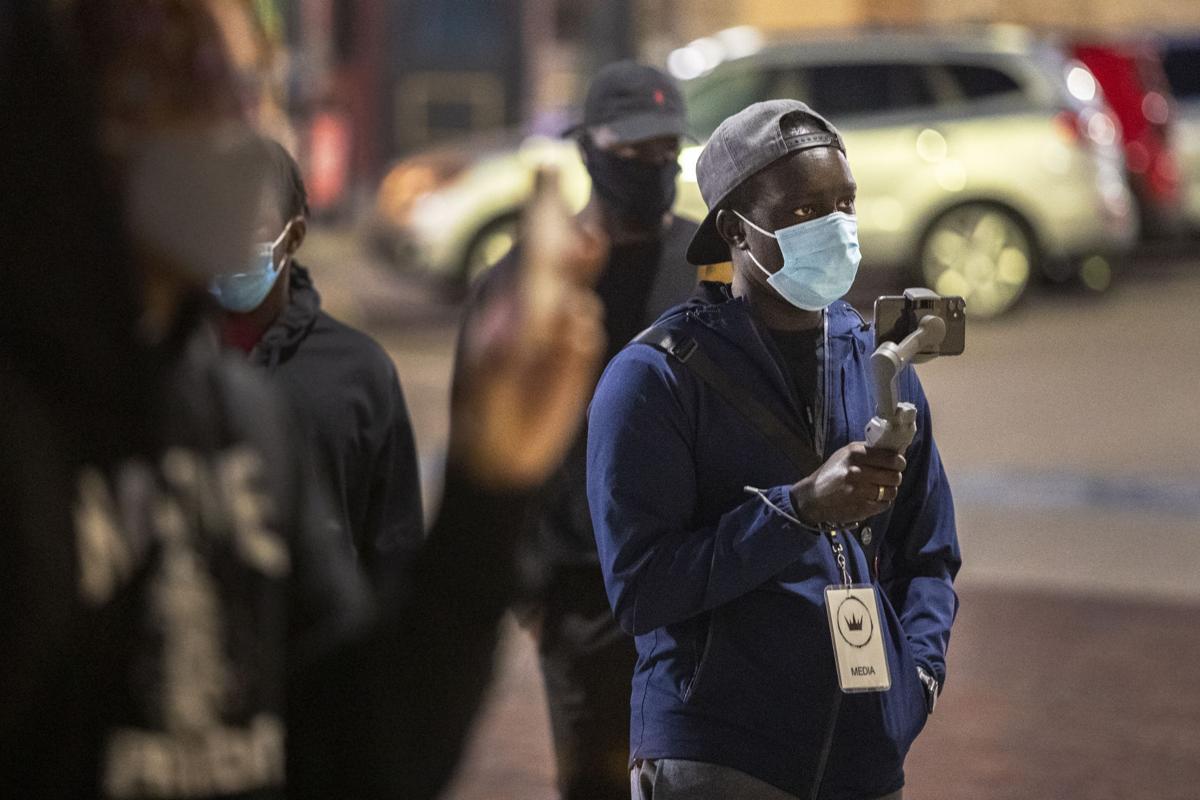 Jazari Kual livestreams the Stand UP Speak OUT March on Sept. 28 in the Haymarket. Kual is an independent media producer who has gained viewers as he documented protests and marches in the area this summer. 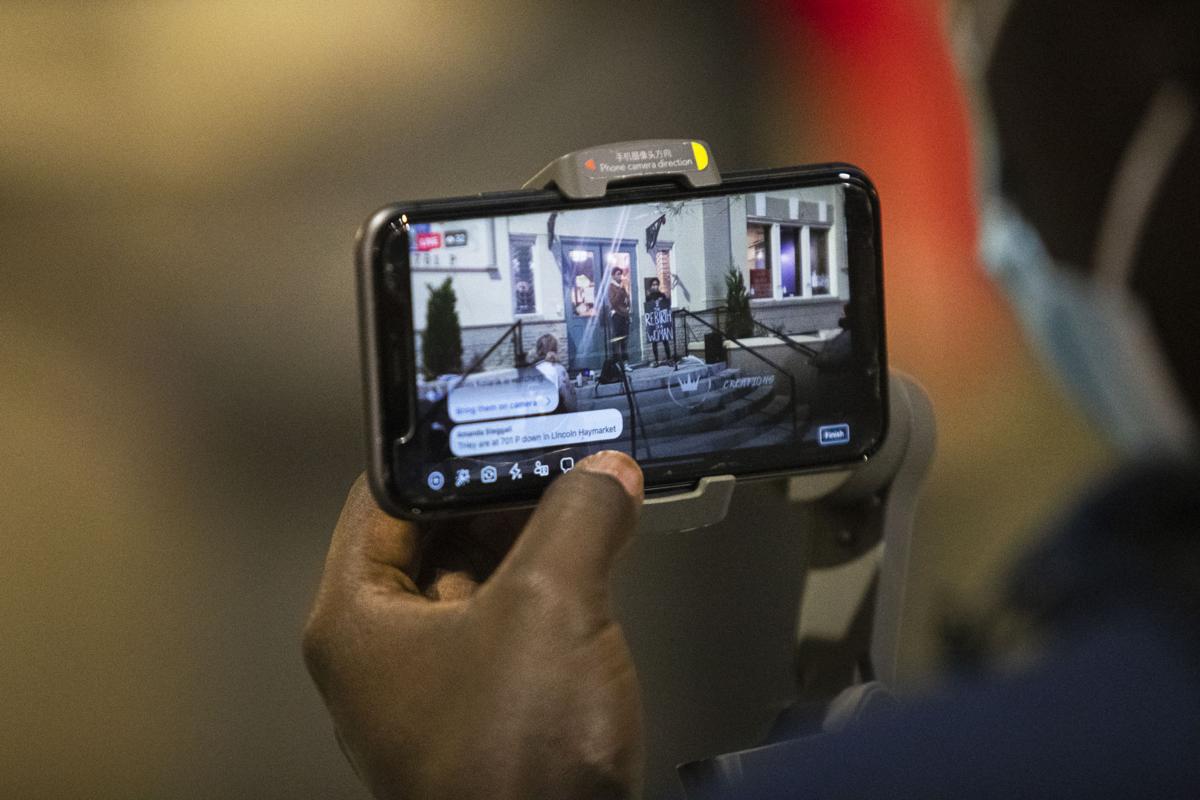 Jazari Kual answers comments as he livestreams the Stand UP Speak OUT March in the Haymarket on Sunday in Lincoln.

The woman is standing on the steps of the Creamery Building, talking softly.

“Being a survivor, I know what it’s like to be alone.”

The phone camera holds her in its frame before panning to the crowd — people holding signs and listening in the Haymarket. Showing their support with applause.

The camera follows them as the Black Leaders March Against Domestic Violence makes its way up the brick-lined street and beyond on a late September night.

Jazari Kual is holding the camera.

Behind the mystery of the hillbilly shack on a busy southeast Lincoln corner, Sept. 27, 2020

He’s been holding a camera for a long time. Making short films and YouTube videos. Filming weddings and commercials and, this spring and summer, using his skills to cover marches and protests and rallies.

He’s just 25. A Lincoln Northeast High graduate who sang in show choir and dabbled in theater and dreamed of his own production company.

He has one now. It’s called Kualdom Creations with an office in the Turbine Flats building on Y Street. He has a crew and a professional Facebook page with livestreamed videos that attract hundreds of thousands of eyes from all over the country and beyond.

It’s grown since the Black Lives Matter protests began in late May after George Floyd died in Minneapolis under the knee of a police officer.

“People think I started all of this this summer,” Kual said Wednesday. “But I’ve actually been making content for five years.”

But this summer has been pivotal for Kual, whose Sudanese mother fled civil war, arriving in America a month before his birth, landing first in St. Louis before eventually settling in Lincoln.

He was bullied as a boy, he says. In middle school and high school. Not just at school but in his neighborhood, too.

Kids made fun of his mannerisms and the color of his skin.

He heard “all sorts of derogatory names.” He heard: “You talk so white for a Black guy.”

He hears it now, too, hate messages based on the events he covers.

It still hurts, but he tries to put it in perspective.

“I’m a Christian,” he says. “I’m a firm believer that everything happens for a reason.”

He was 11 when his stepfather died in Omaha. He’d been Tasered by police and had a heart attack, Kual said.

Cindy Lange-Kubick: Bridging the realities that divide us, signs of our times

He doesn’t know all the details of that day, and it never made the news, but he remembers the phone call and his mother’s screams, his older siblings rushing home.

“For the longest time, I was afraid to hear the phone ring because I was afraid of what was on the other side.”

His stepfather’s death prepared him and propelled him to become a videographer, he says.

“To honor his memory by documenting, because there’s no documentation of what happened to him.”

He’s covered dozens of marches since April. Maybe 100. He travels to Omaha to livestream marches there.

He’s been at Trump rallies and anti-mask rallies. He’s filmed outside businesses and prisons. Up and down the streets of Lincoln.

Maghie Miller-Jenkins was at the Capitol the day he documented a solidarity ceremony there. Native, Black and Hispanic community members coming together to the sound of a Lakota drummer.

“The only video coverage we had of that day was people like Jazari on his own time and on his own dime,” she said.

As an activist and founder of a group called Community Coalition, the mother of three appreciates his work.

“I feel like the mainstream media doesn’t have the rawness of what he does, the in-the-moment feeling.”

She calls him fair-minded, always open to new voices.

“He never denies anyone a stage,” she said. “The heart and soul he puts into everything. He’s seriously such an inspiration.”

Schauer has been watching Kual’s Q&A sessions with local activists and political candidates — he’s invited all of them to sit down and chat about their views.

“I admire him for getting the community together, talking and thinking,” he said. “He wants to talk to both sides.”

During a Zoom interview earlier this summer, Kual tears up talking about his nephew and changing the future for kids.

He and his Kualdom Creations team are working on a 10-part documentary series from this summer of protests and the 100 hours of footage Kual has shot.

“That’s our end goal of everything we’re filming.”

Exciting, he says. “But overwhelming.”

He credits his team and his friends and the people supporting his effort to document a historic time.

He wants to use his own leadership to lift up others, he says.

“I have people from all political parties watch my stuff. That’s one thing I’m pretty proud of, to have a space where people can come and talk.”

He wants to listen and grow and he wants to provide a platform for others to do that, too.

“I’m proud of building a network of people,” he says. “It’s pretty much like a family online.”

He also has a full-time day job.

He doesn’t make money from his livestream videos, but people make donations in support of his coverage.

The guy who stood before the City Council on Monday talking about the young leaders he sees night after night exercising their First Amendment rights and “fighting for equality and justice.”

The guy who is everywhere.

Kual called Miller-Jenkins the other day, she said. Someone had recognized him at the grocery store.

“Why are people recognizing me?” he asked her.

She had an answer: “Because you’re an amazing dude.”