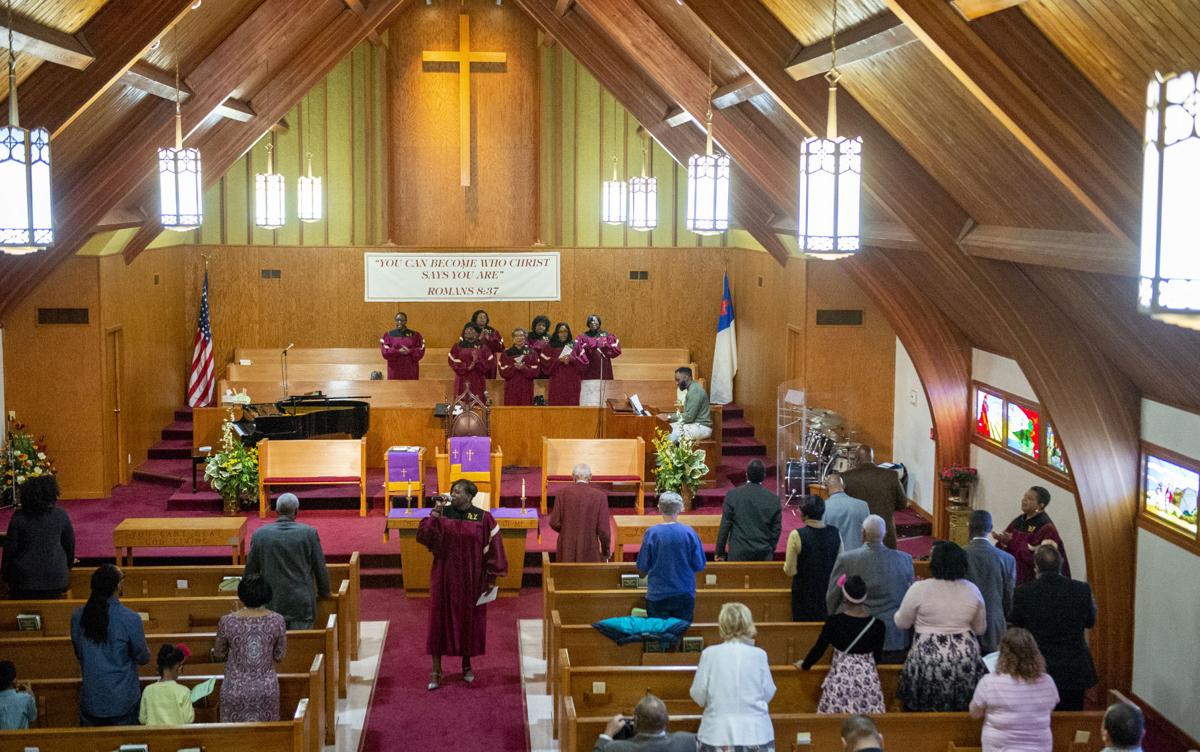 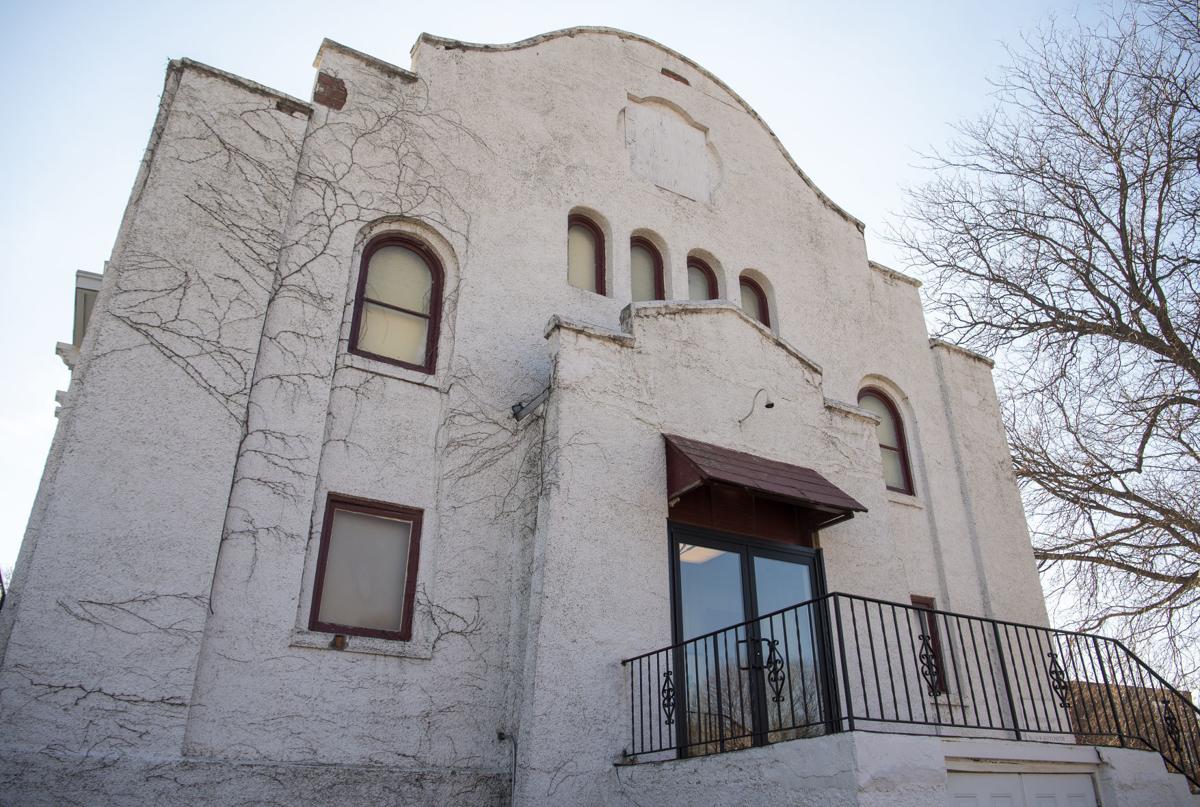 The exterior of the original Mount Zion Baptist Church at 1202 F St. 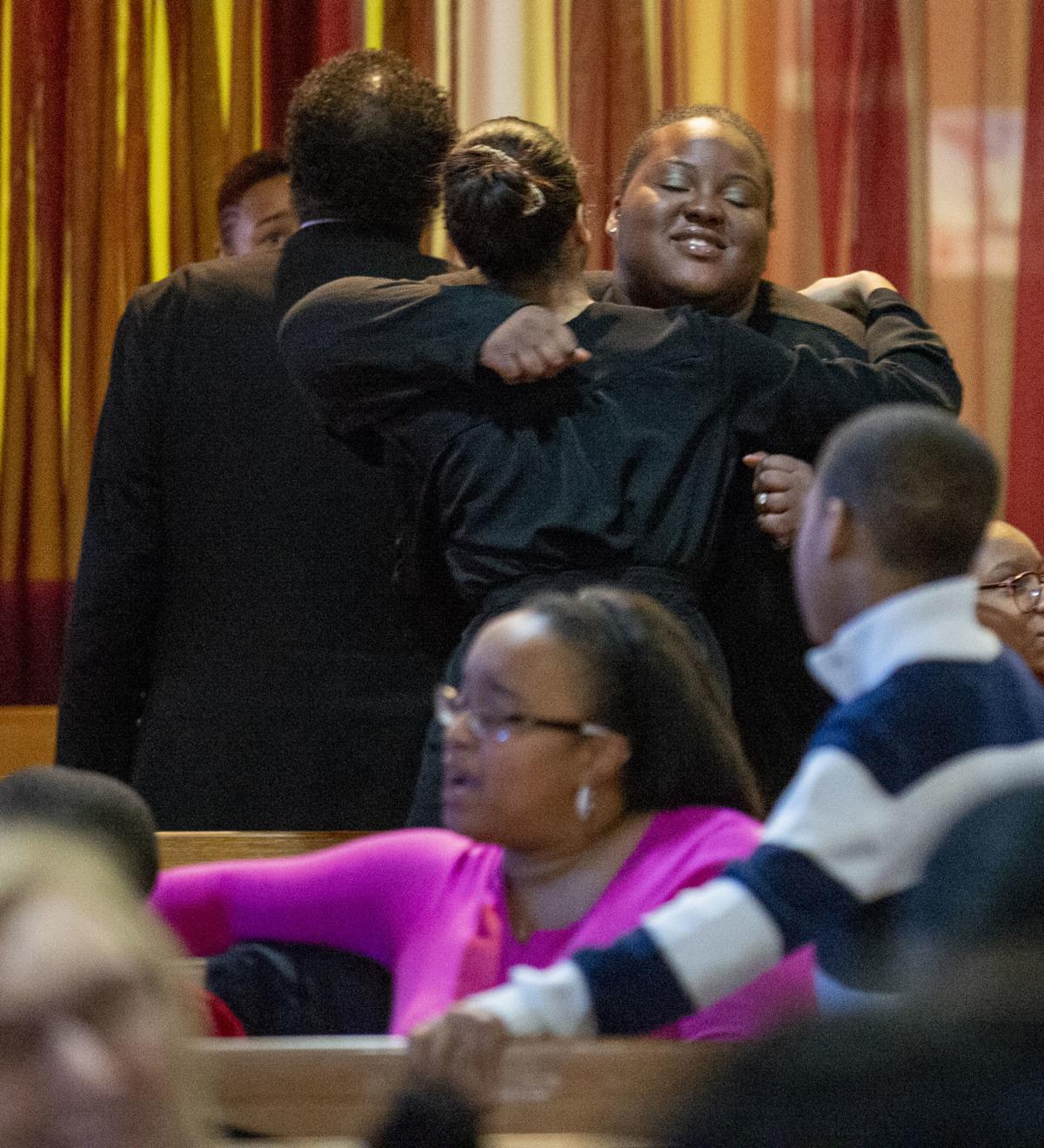 Churchgoers hug during a time to greet one another on Sunday at Mount Zion Baptist Church. 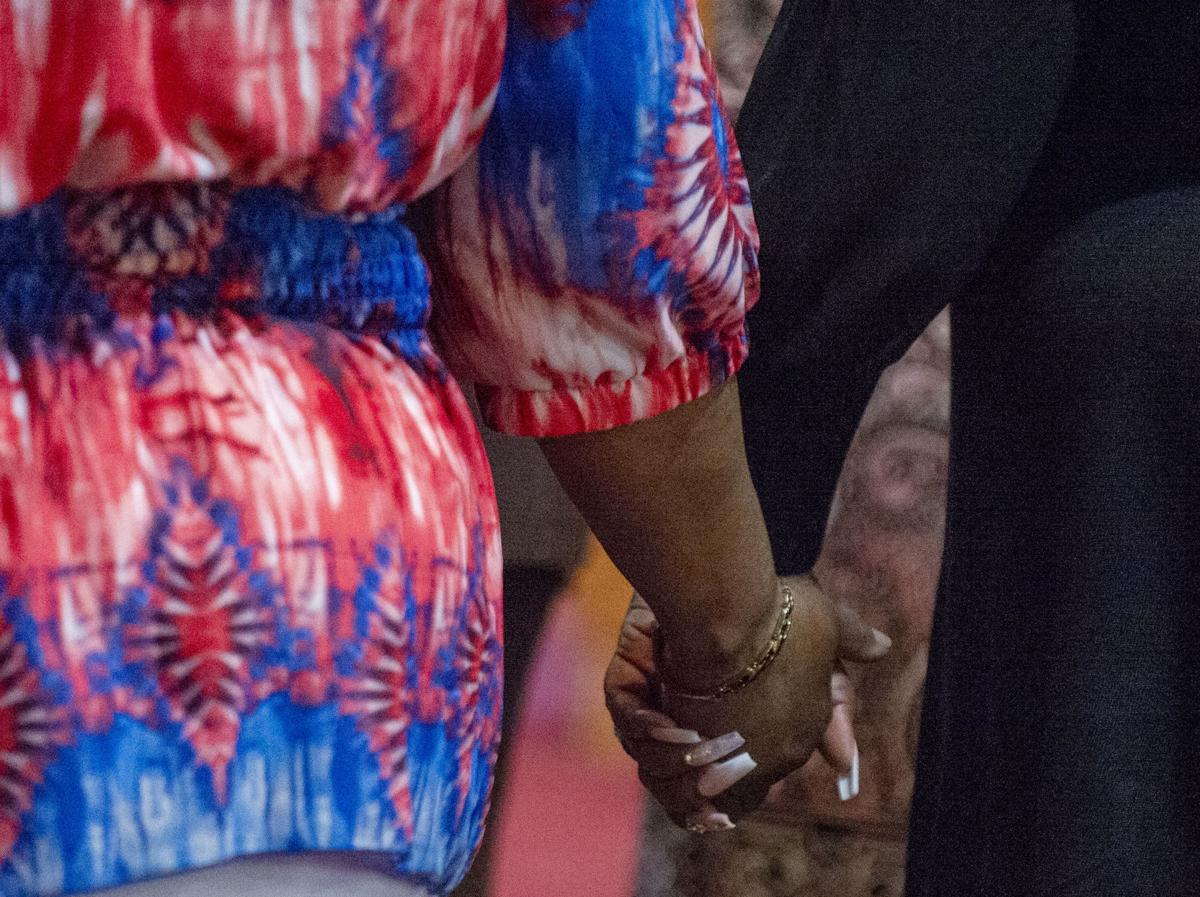 Churchgoers hold hands while gathered around the altar for a prayer last week at Mount Zion Baptist Church. 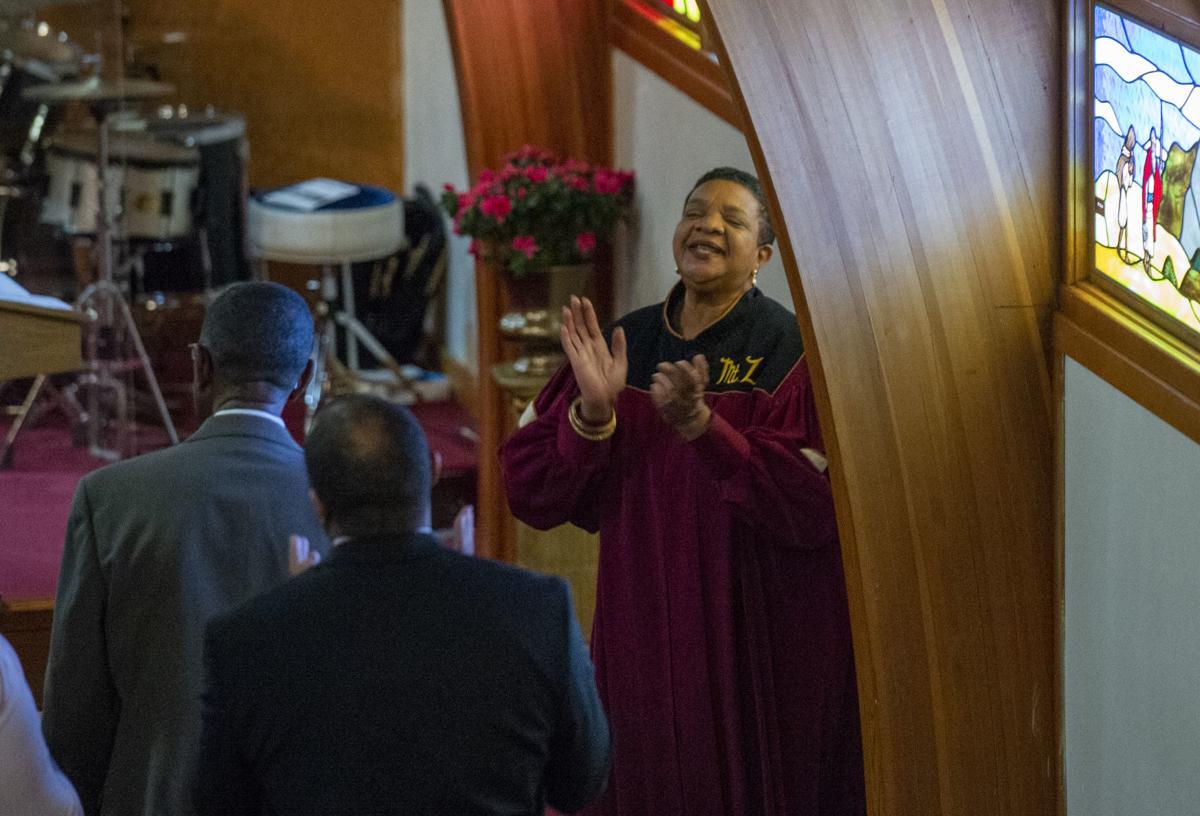 Songs of celebration are sung during a service last week at Mount Zion Baptist Church. 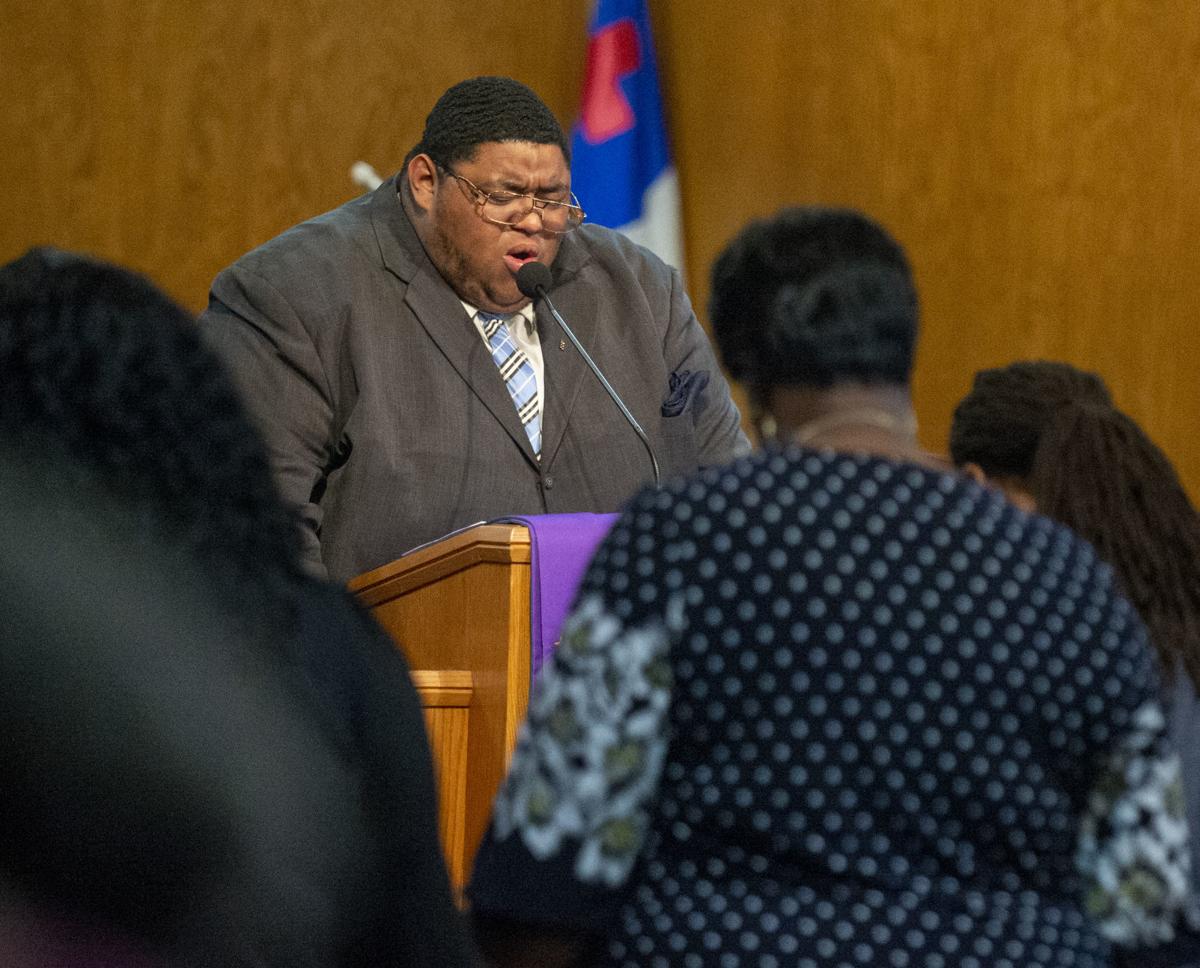 Churchgoers gather around the altar for a prayer last week at Mount Zion Baptist Church. 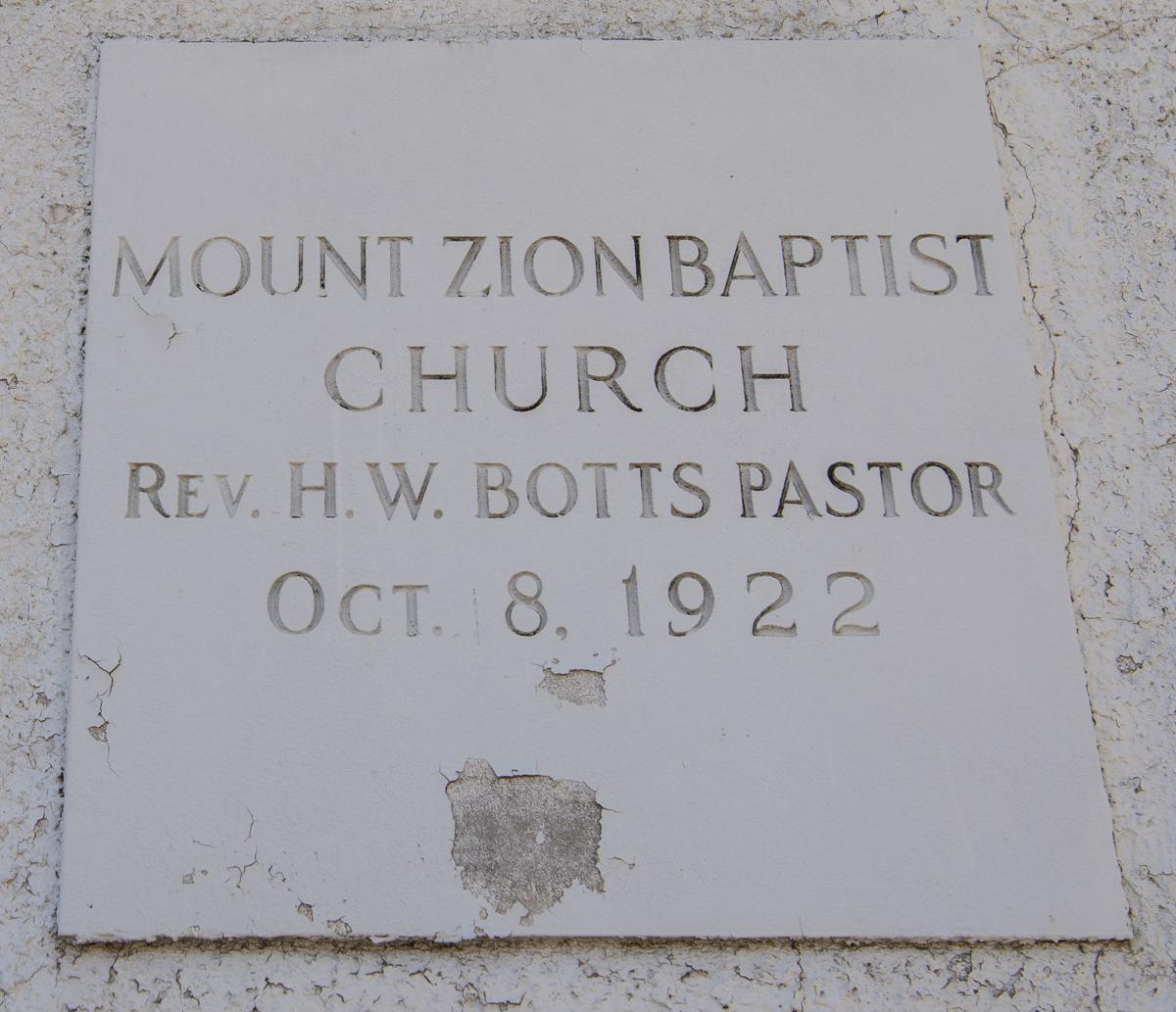 Cornerstone on the exterior of the Mount Zion Baptist Church at 1202 F St.

Sunya Carter sits outside the sanctuary, waiting for Sunday service to start.

She’s been a member of Mount Zion Baptist Church all of her life.

Her grandmother joined the church first, she says. And her father was baptized at Mount Zion; 75 years of Sunday worship until his death in 2012.

A church that cares about young people.

It’s an old church, too, she says.

“The oldest black Baptist church in the state.”

This is the day that the Lord hath made!

Marla Styles has a microphone, and she’s in the aisle in her maroon choir robe, preparing to lead the congregation in song.

Choir members clap and the congregation rises to join them.

This is the newest Mount Zion church — a stone building on North 56th Street with a high-peaked sanctuary and a row of stained glass that stretches down one side, sunlight filtering through on the third Sunday of February.

The old church is still standing on the corner of 12th and F streets, built in 1922, at a cost of $1,500, according to newspaper accounts of the time.

The state of Nebraska had given that land to the black Baptist congregation in 1882, three years after its founding by the Rev. Marcus Mack of Louisiana, says Ed Zimmer, Lincoln’s historic preservation planner.

They built a wood-frame church, then moved it to make way for a stone foundation that rose just 5 feet above the ground.

It remained a basement church for more than 30 years, until a brick Mission Revival church took its place, covered in stucco.

Birdie Powell was baptized at that white-stuccoed church. “Dunked in the water,” she says.

She remembers driving across town with her parents for church dinners, prepared by the ladies of Mount Zion.

“They’d sell tickets, and the ladies would be down there frying chicken; the basement would be full of people.”

She remembers those women at Monday mission meetings and Wednesday prayer meetings at their homes.

And now the Rev. Combs’ son, Tremaine, who returned to Lincoln from St. Louis with his wife, Tierra, and their five children to lead the congregation after his father died in August.

There are older church members than Powell.

But no one who’s been around longer.

“The others have all passed away,” she says. “And I’m climbing the ladder.”

Charles Robinson showed up at Mount Zion in 1959. He’d moved to Lincoln from Alabama for work, and his uncle was a deacon.

“I was a Baptist, and it was the only black Baptist church in Lincoln at the time,” he says.

Dewayne and Jareldine Mays joined in the late ‘70s, when they moved here and went in search of a church home.

“It’s a connecting point for a lot of people who come to Lincoln looking to make connections with people who look like them,” Dewayne Mays says. “A lot of people come from the South and have those southern roots.”

The Rev. Garther Collins was the pastor then. The Baptist minister from Oklahoma packed up his family when he got the call in 1958.

His oldest daughter was 3.

“I call it my Mount Zion family,” Belinda Collins-Payne says. “A lot of members are still here from when I was in the children’s choir.”

Her father marched alongside the Rev. Dr. Martin Luther King Jr., she says. He put his shoulder into community work.

That commitment continued when the Rev. Michael Combs, a University of Nebraska-Lincoln political science professor, became pastor in 1986, and has passed through to his son, who founded and led his own church in St. Charles, Missouri.

“To me, Mount Zion is the bedrock of the African American community in Lincoln,” Tremaine Combs says. “It is near and dear to the hearts of African Americans here and I think it’s because we have always strived — imperfectly, because we are humans — to be family.”

That church family comes in all colors on Sunday mornings in 2020, but its foundation is in its black history and tradition.

“We have always been unashamedly Christian and unapologetically black,” Combs says.

In the 1980s, the Klan threatened to kill his father and burn the church, says the pastor, but the church and his father remained faithful.

They can take the pain they experience in Lincoln because of their race and continue to see others of different races and ethnicities as their brothers and sisters, Combs says.

On Sunday, members come into the church in waves, the pews filling over the first hour of service.

Older members, like Powell and Florine Joseph and Frances King, are here from the first amen to the last.

King is 99. She was born in Kansas and moved to Alliance with her parents as a girl. She lived in Lincoln off and on as her career with the government took her away to Denver and later New Orleans.

She always came back to Mount Zion.

“I have the honor of being the oldest person in church,” she says. “I plan to keep going as long as somebody will pick me up and take me.”

They call her Mom King now, she says. Or Mom Frances.

She was the church treasurer for 20 years and the Sunday School superintendent after that.

She can remember when the pastor at the front of the church today — the last Mount Zion member to be baptized at the old church in the fall of 1990 before they moved here — was a little boy.

“I used to walk him around the church here outside so his mom could sing in the choir,” she says. “I had to learn to call him reverend.”

Sunday’s service moves from music to scripture to prayer.

People leave their seats and walk to the front of the church, a wide circle dressed in Sunday best, hands holding hands.

There’s a wide banner in front of them, a verse from Romans: “The Place You Can Become Who Christ Says You Are.”

Jason Wagner II, a minister assisting the Rev. Combs, stands at the microphone.

Later still, there will be tithes and offerings and hugs and blessings and the story of the black St. Perpetua.

And then the Rev. Combs standing in front of his congregation.

“The two oldest black churches in Lincoln taking the time to worship together,” he says. “The Methodists and the Baptists together, when you get to heaven it’s not going to matter.”

He invites his congregation to attend.

“We come together as family,” he says. “A family of all those who love the Lord.”

He makes the call. Amen?

And the church answers.

Cindy Lange-Kubick: 'He’s defying stereotypes each and every time he interacts with people,' Feb. 11, 2020

Evacuees heading home after 14 days in quarantine at Camp Ashland

Nebraska celebrates its 153rd anniversary as a state today. Here's a look at Statehood Day celebrations through the years.

Matt Wills makes one 100-mile ride each month. He recently hit a milestone of 100 rides.

Doris Collins served on the Nebraska Parole Board under four governors and was a leader in the Black community. 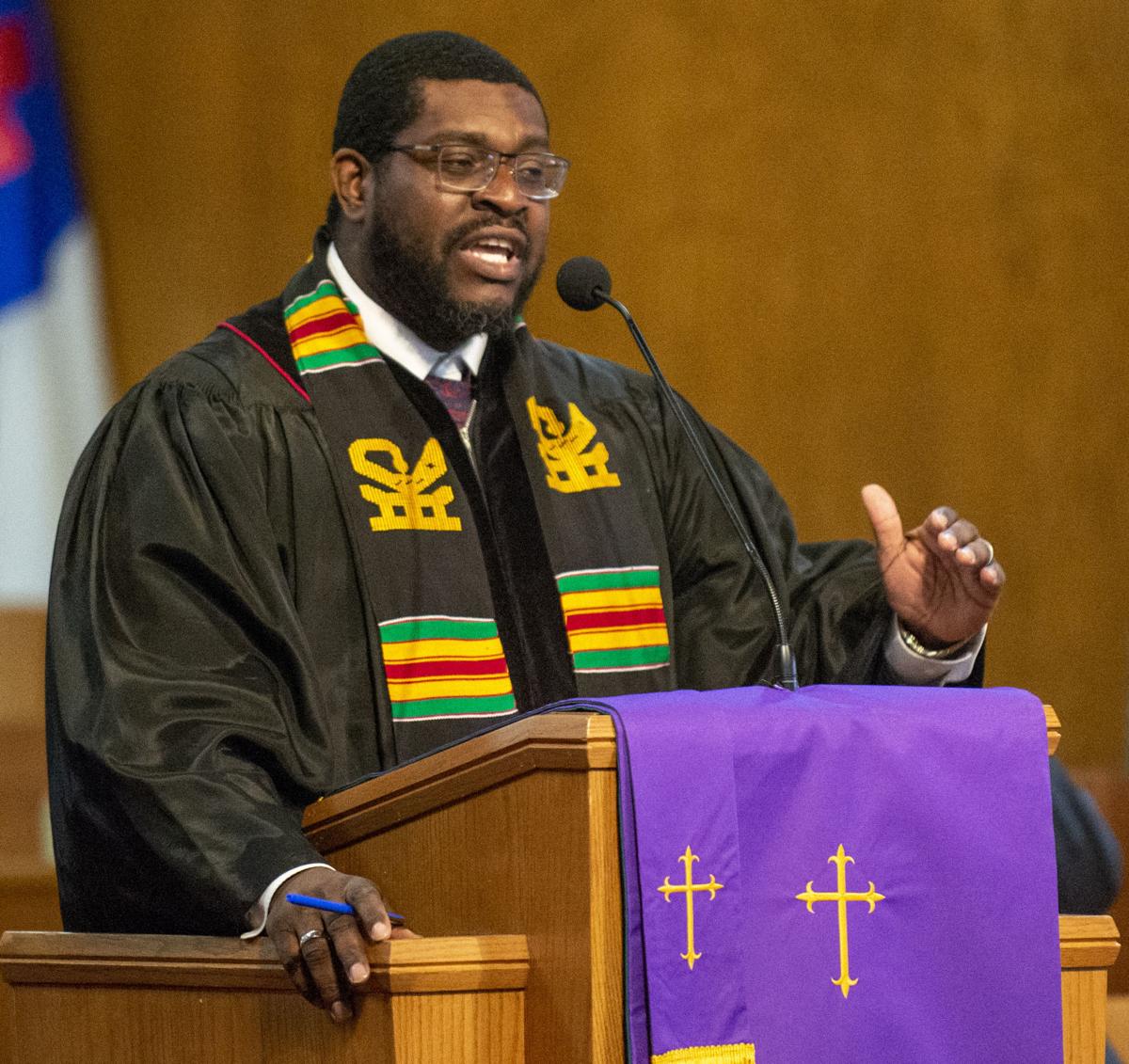 The Rev. Tremaine Combs talks to the congregation before giving his sermon last week at Mount Zion Baptist Church. 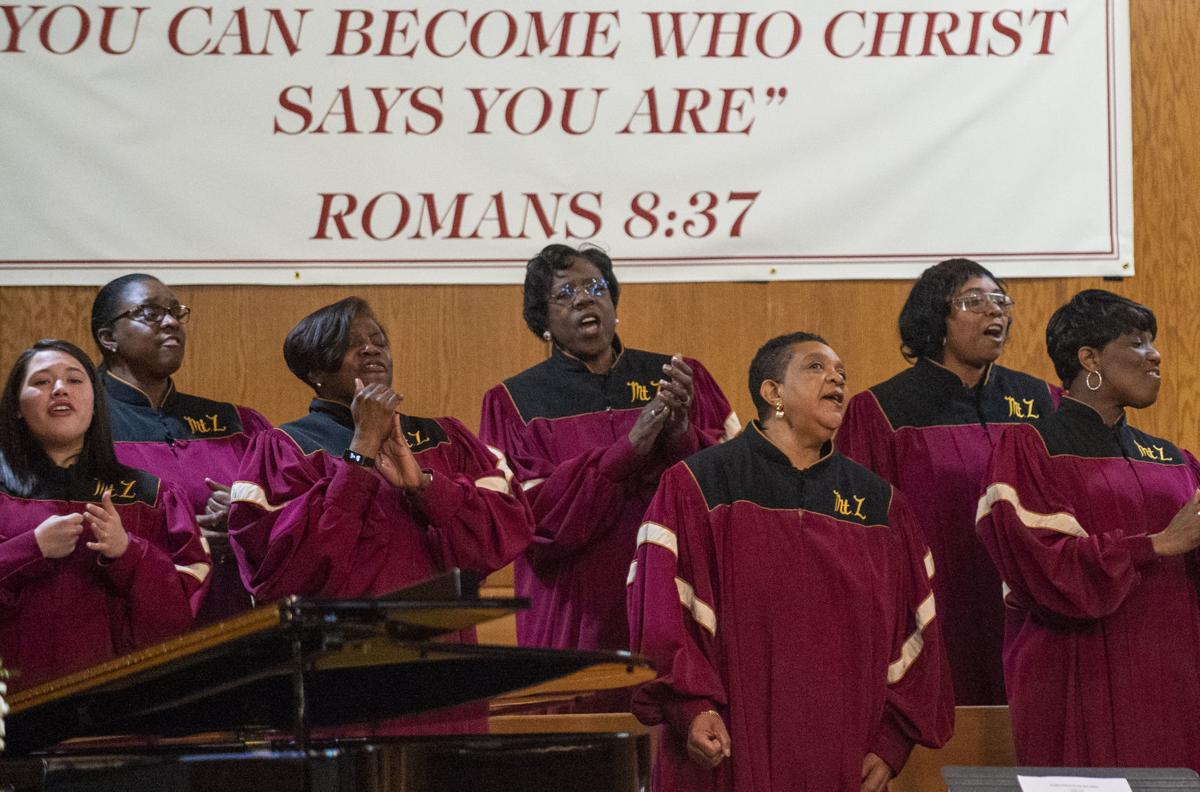 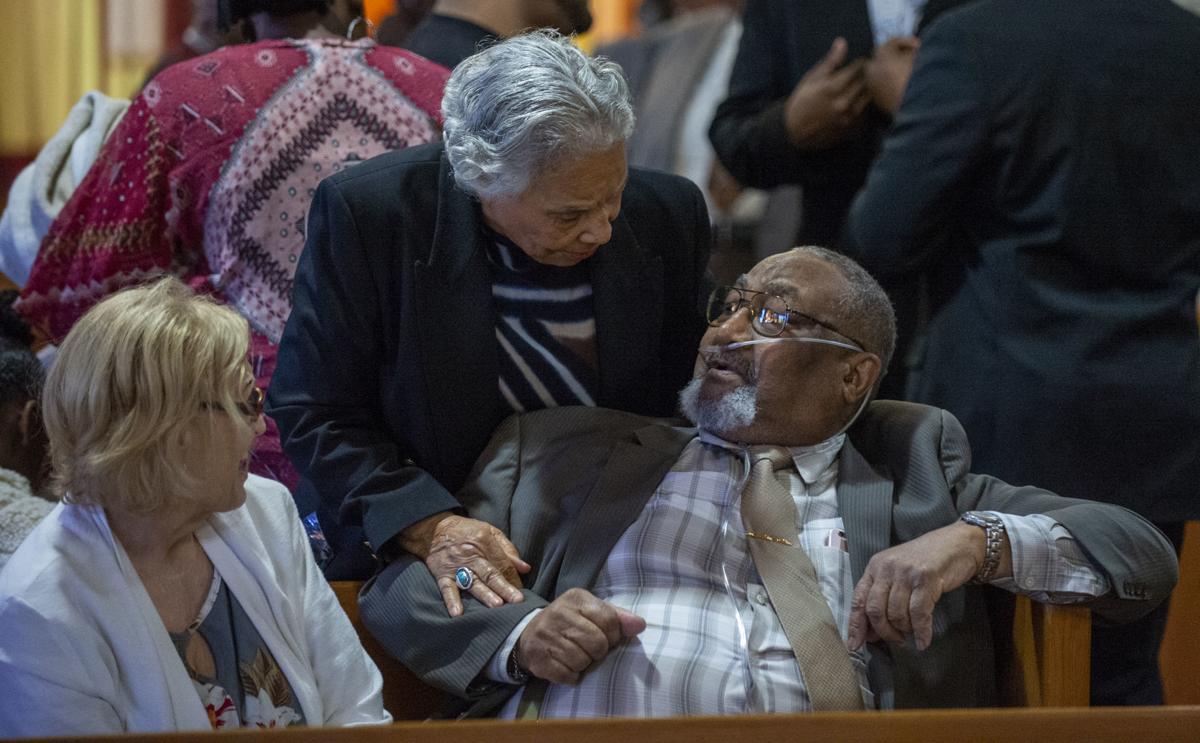 Rebecca Bowman (seated, left) and Bill Bowman talk to Birdie Powell (center) during a time to greet one another last week at Mount Zion Baptist Church. 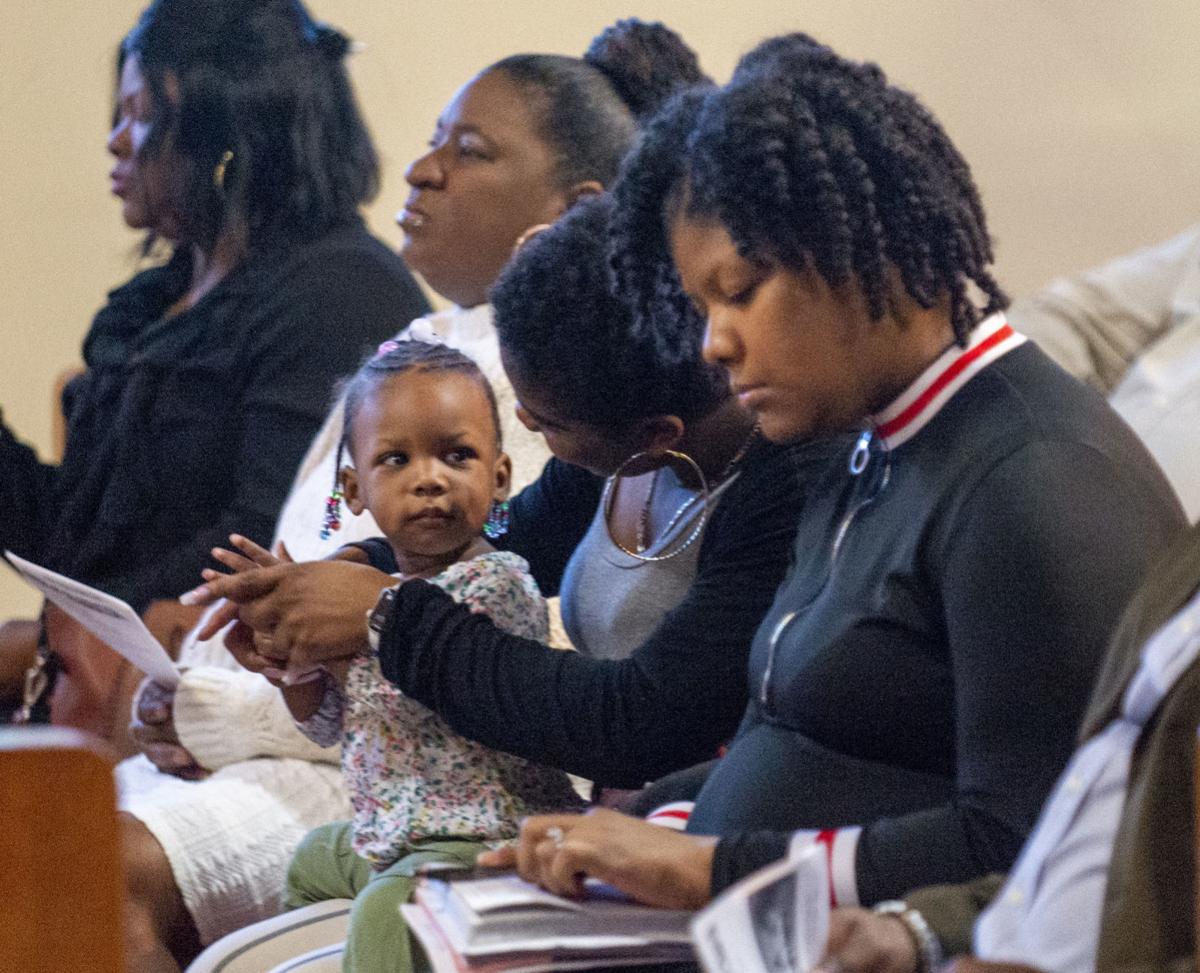 The exterior of the original Mount Zion Baptist Church at 1202 F St.

Churchgoers hug during a time to greet one another on Sunday at Mount Zion Baptist Church.

Churchgoers hold hands while gathered around the altar for a prayer last week at Mount Zion Baptist Church.

Songs of celebration are sung during a service last week at Mount Zion Baptist Church.

Churchgoers gather around the altar for a prayer last week at Mount Zion Baptist Church. 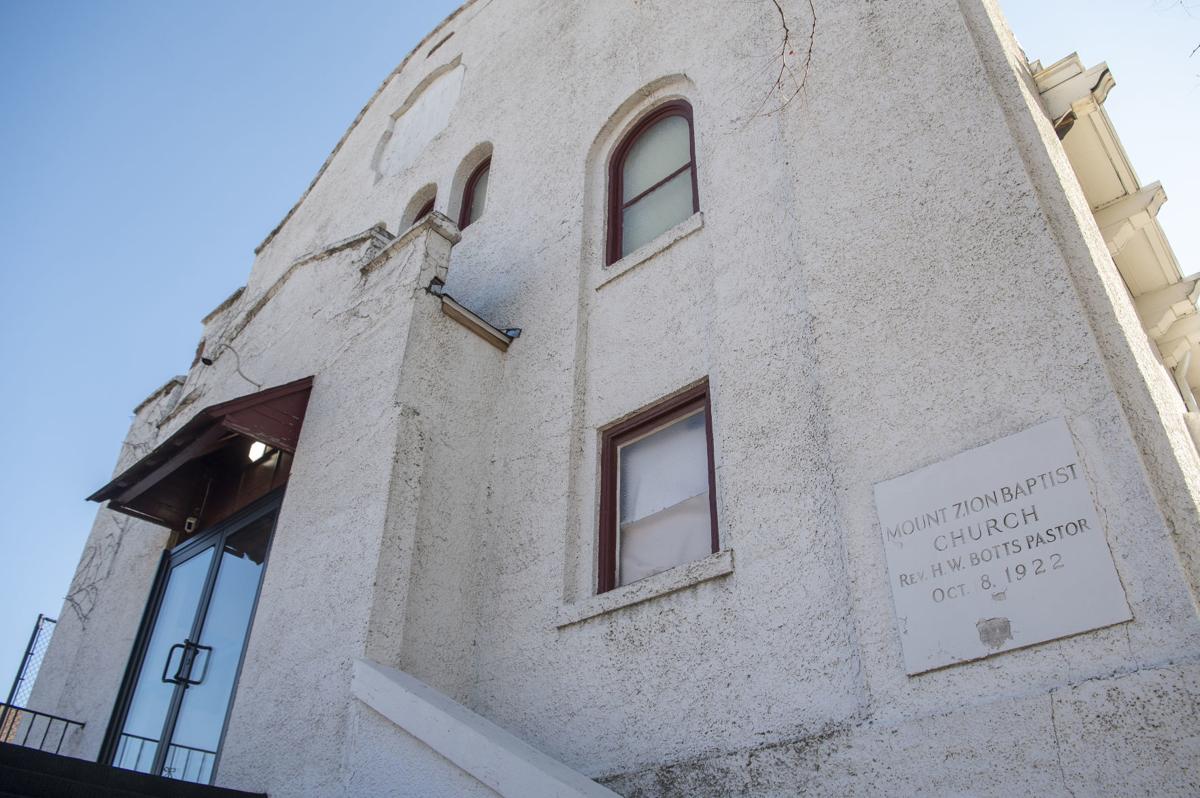 The exterior and cornerstone of the original Mount Zion Baptist Church at 1202 F St.

Cornerstone on the exterior of the Mount Zion Baptist Church at 1202 F St.