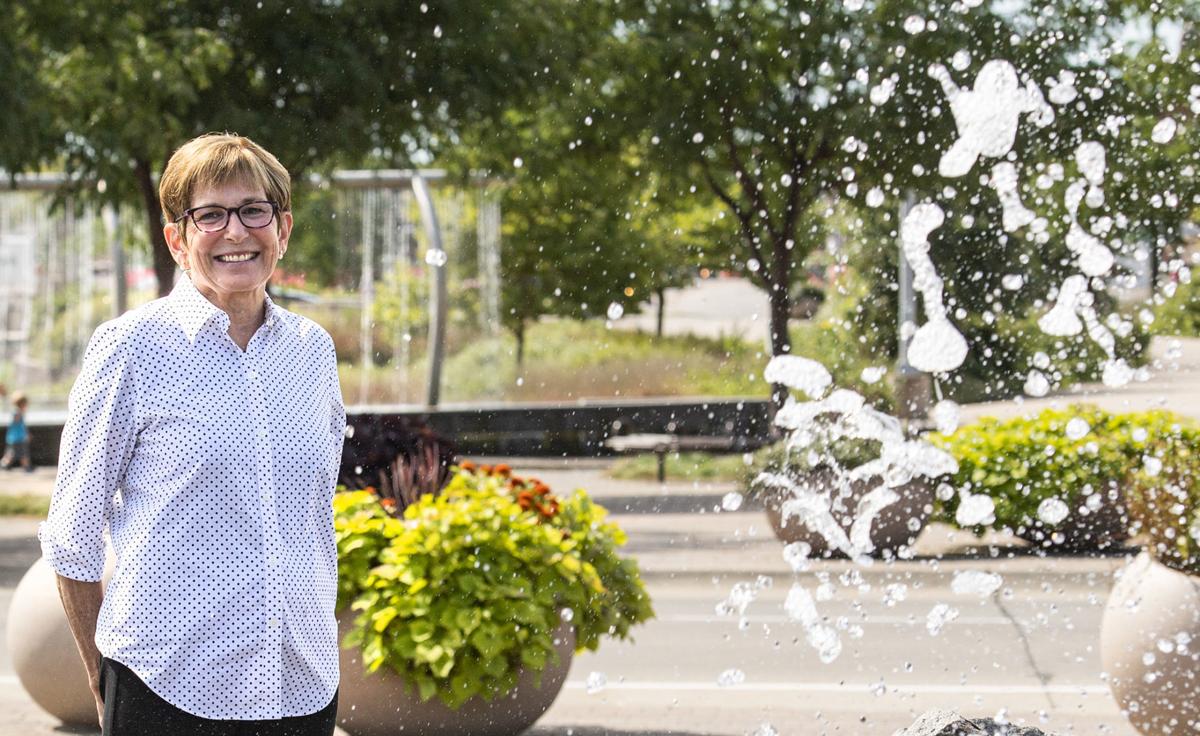 Susan Seacrest, the driving force behind the formation of the Groundwater Foundation in 1985, poses for a portrait at Union Plaza, while a nearby fountain sprays water. Recent news that the Trump administration had weakened the Endangered Species Act caused her to make a rare appearance on social media and speak out. 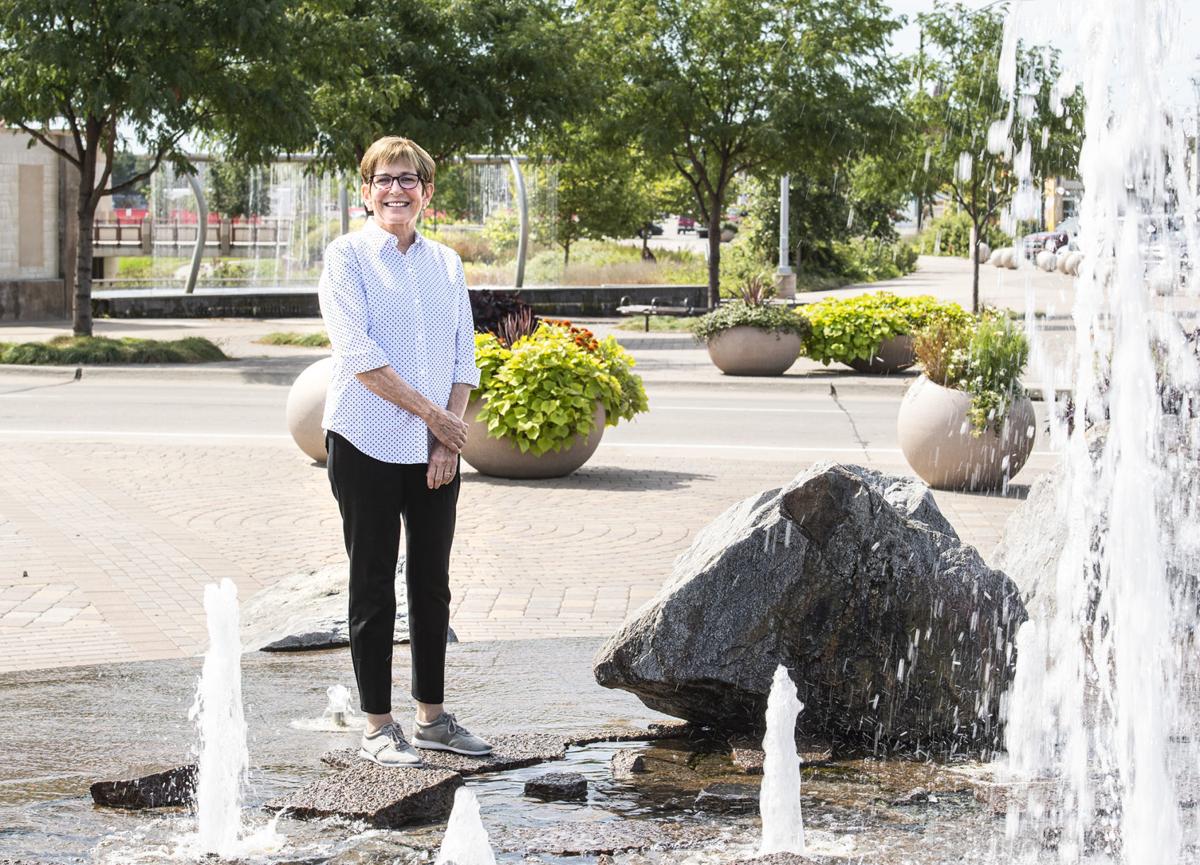 Susan Seacrest, former president of the Groundwater Foundation, poses for a portrait at Union Plaza.

Back when Susan Seacrest was running the Groundwater Foundation — the organization she started at her kitchen table in 1985 — her husband threatened to tape a sign on her back when they went out in public.

The sign would be a warning: Do not ask this woman about the Groundwater Foundation!

Because Gary Seacrest knew his wife.

“I had so much passion for groundwater,” Susan Seacrest said last week. “He knew I would talk about it for 2 1/2 hours.”

Seacrest retired in 2007 from the nonprofit she grew into a nationally acclaimed protector of groundwater. She went on to a career at North Star High School as a guidance counselor and, for the past four years has volunteered at the Juvenile Detention Center in its Pathfinder program.

But her passion for the cause she championed for so long has never waned. (Nor did her ability to talk about it for 2 1/2 hours.)

Which is why Monday — late at night at another kitchen table in another house in Lincoln — Seacrest sat down and made her first ever post on Facebook.

Silence about our precious groundwater is no longer an option ...

She’d just finished watching Brian Williams on MSNBC. She’d heard his guest — a scientist from Germany — talking about what the Trump administration’s weakening of the Endangered Species Act would mean.

“I just thought, ‘He gets it. He’s scared. He’s thinking his whole life’s work is going to go up in smoke.’”

And she thought: What am I doing?

She doesn’t “do” social media, Seacrest says. She only signed up for Facebook to keep track of the Salt Creek Wranglers. (Horses, another of her passions).

Anyone who may know of my past work to educate people everywhere about groundwater knows how much I value and respect this vital resource. You may also know I have never been political regarding this passion ...

But she felt compelled to speak out.

The current administration has decided to attack, not reform the ESA. In reality, this action and others too numerous to mention have declared war on natural resources, including the wildlife we treasure, the water we drink, and the air our children breathe ...

“It’s the strongest environmental legislation ever passed by the U.S. Congress,” she said a few days after her post. “It’s really the Endangered Species Act that has flown above everything else and has been the guardrail.”

Think about the bald eagle, she says. The poster child of the ESA. When we stopped damming up and plowing over and cutting down its habitat its numbers grew.

Not just for America's iconic bird. More than 200 species have been brought back from the brink of extinction. From the black-footed ferret to the whooping crane, from the gray wolf to the shortnose sturgeon.

It’s a whole new world from the days when HW Bush stood up for wetlands and Richard Nixon supported the EPA and the ESA … Today, groundwater is under attack from many directions. Federal water standards have not been reviewed for decades as required. Bipartisan collaboration is no more. The regulated community, who have appropriately had a seat at the regulatory table are now often the only ones at the table …

Seacrest knows the history of environmental legislation in America. She can tick off the big wins: The Clean Water Act 1972. The Endangered Species Act 1973. The Safe Drinking Water Act 1974. (Thank you, Richard Nixon, she says.)

In her years at the helm of the Groundwater Foundation, Seacrest had a seat at the table. On federal advisory committees on children’s health and environmental education and both the clean and safe drinking water acts.

“I used to read the safe drinking water legislation,” she says. “I had literally thousands of pages on my nightstand.”

She sat around boardroom tables, often the only woman. “You’ve read ‘Harry Potter?” she asks. “I had to be Hermione Granger.”

She did her homework. She fought stereotypes. Like the committee chair from California who called her “Susie.” After they forged a friendship, she told him she didn’t mind being Susie, as long as he started calling all of the male members by their first names, too. (He called her Ms. Seacrest after that and visited her in Lincoln for a Husker game.)

I worked for years to help get citizens engaged in groundwater issues. I am horrified that science and citizen interests have given way to lobbyists running the very agencies designed to protect and preserve natural resources …

We should listen to Seacrest.

And she has a lot to say. She can talk about groundwater and the environment and about kids (her love for her own and other people’s). She can talk about podcasts (True crime! Malcolm Gladwell!) and legislation and the importance of a free press and who has the best coffee in town.

She can meander from one topic to the next, like water carving a path through a canyon.

And somehow, it all merges together and makes sense.

Seacrest was an only child. A handful, she says.

Her parents grew up in Willa Cather country and, each August, she went back to the farm in Webster County, sleeping in her uncle’s childhood bedroom.

She could look out that second-floor window and see the source of the family’s water. It lulled her to sleep and greeted her when she woke up.

“First thing in the morning and last thing at night I could hear the sound of that windmill pumping water.”

She wanted to be a farmer back then. (No, not a farmer’s wife, she told her aunts and uncles. A farmer. Driving a tractor.)

She ended up in education instead. She married a journalist and they raised their three kids here. It was 38 years ago, when her firstborn was a baby — sick and in and out of the hospital — that she read a story about a doctor studying high rates of blood cancers in central Nebraska.

She started doing her own research.

She learned about the treasure beneath the surface: The Ogallala Aquifer. One of the world’s largest, stretching from South Dakota to Texas, with its broadest swath in Nebraska.

The source of up to 80% of the water Nebraskans drink. The water used to grow crops and replenish springs. The hidden places where everything seeps — rain and snow and pesticides and oil spills.

She armed herself with knowledge and a desire to educate, and the foundation was born. It thrived and grew. The Children’s Groundwater Festival became a model for other states’ environmental education efforts. The Groundwater Guardian program — communities implementing well and aquifer protection programs — followed suit.

Honors were bestowed. Among them: “Hero of the Planet,” from Time Magazine. The Heinz Award for the Environment.

Seacrest shrugs over her coffee at the Hub Cafe on Wednesday morning.

Awards are overrated, she says. But the Heinz, that was fun. And the $125,000 that came with it meant that she could leave the foundation with the seeds for more work.

The Journal Star published Seacrest’s Facebook post on its editorial page Thursday. She’d expanded it and added context and a shout-out to Nebraska’s Natural Resources Districts.

She liked her original better, she says. A 10-minute stream of consciousness composed in her PJs at midnight. Unfiltered.

It had been bubbling, she says. “Honestly, it’s been very difficult to not explode with some sort of emotion.”

Her kids are grown and she has two grandchildren in Montana.

And this year, the Groundwater Foundation founder turns 66.

Her oldest son gave her a hard time the other day: Did you really just say, I don’t want to throw shade on you?

Seacrest laughs. She talks about time and where it went and the importance of staying engaged with the world.

“At every age we have an obligation to do things that matter.”

This matters. The natural world matters, those species, our land and water, our kids and grandkids.

People talk all the time about “speaking truth to power,” she says.

She has a better idea.

“Let’s speak truth to ourselves,” she says. “Let’s take the blinders off.”

A lot of uneasiness exists among ranchers and residents — and bird lovers — in Nebraska's spacious Sandhills.

Grizzlies get back US protections, Rockies hunts blocked

BILLINGS, Mont. — The first public grizzly bear hunts in the Northern Rockies in almost three decades have been blocked by a U.S. judge who re…

Silence about our precious groundwater is no longer an option.

Cindy Lange-Kubick: 'If we normalize this kind of cruelty, what does it say about us?'

They stand quietly with their signs as shoppers file into the College View Farmers Market, carrying coffee cups and cloth bags soon to be fill…

They took a drive from the photographer’s house near Denton on Saturday.

Cindy Lange-Kubick: The making of a green church — with the help of a green hero

Curt Donaldson has a few points he wants to make.

Poppy Doele is putting on her left arm.

My spinning instructor coaches softball, too.

Cindy Lange-Kubick: A list of summer ending beginnings, led by a football game

Soon summer will be behind us.

The photo arrived last September, during a particularly rough stretch inside the grand old house on South Cotner Boulevard.

Kara Eastman is back on the trail.

Susan Seacrest, the driving force behind the formation of the Groundwater Foundation in 1985, poses for a portrait at Union Plaza, while a nearby fountain sprays water. Recent news that the Trump administration had weakened the Endangered Species Act caused her to make a rare appearance on social media and speak out.

Susan Seacrest, former president of the Groundwater Foundation, poses for a portrait at Union Plaza.