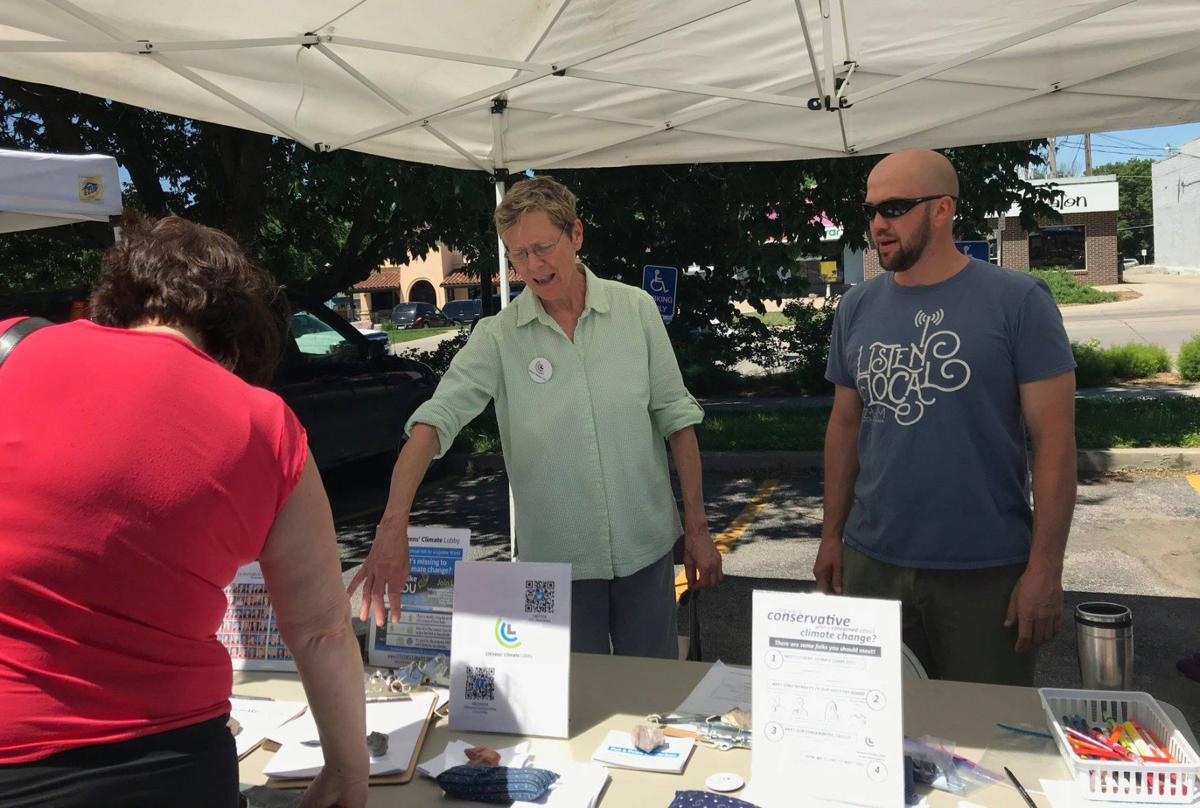 Citizens' Climate Lobby members visit with shoppers at a local farmers market. The Lincoln chapter works to educate the public and pass legislation to slow climate change via a tax on carbon emissions returned to taxpayers as a dividend. 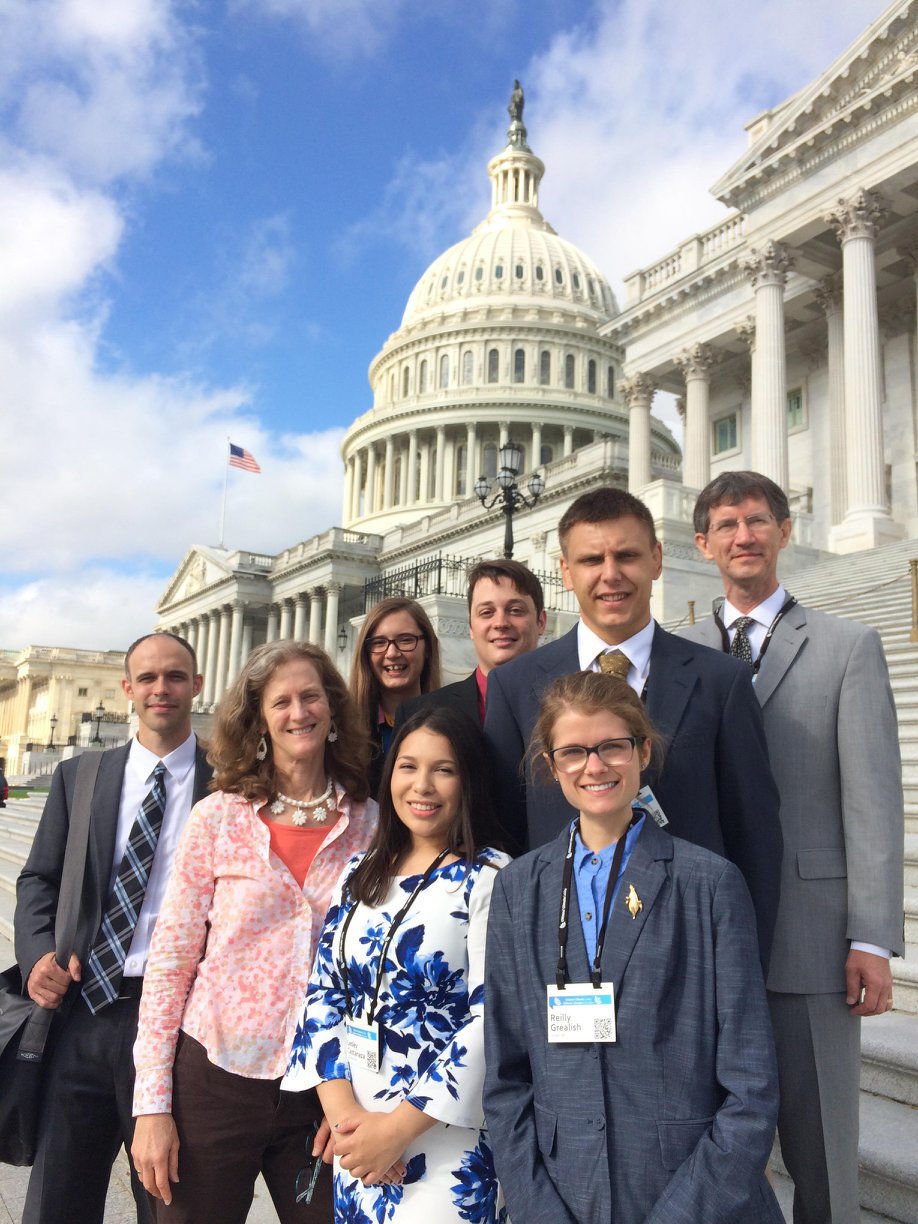 Citizens' Climate Lobby helped send college students to lobby in Washington, D.C., in 2018 and 2019. The Lincoln chapter works to educate the public and pass legislation to slow climate change via a tax on carbon emissions returned to taxpayers as a dividend. 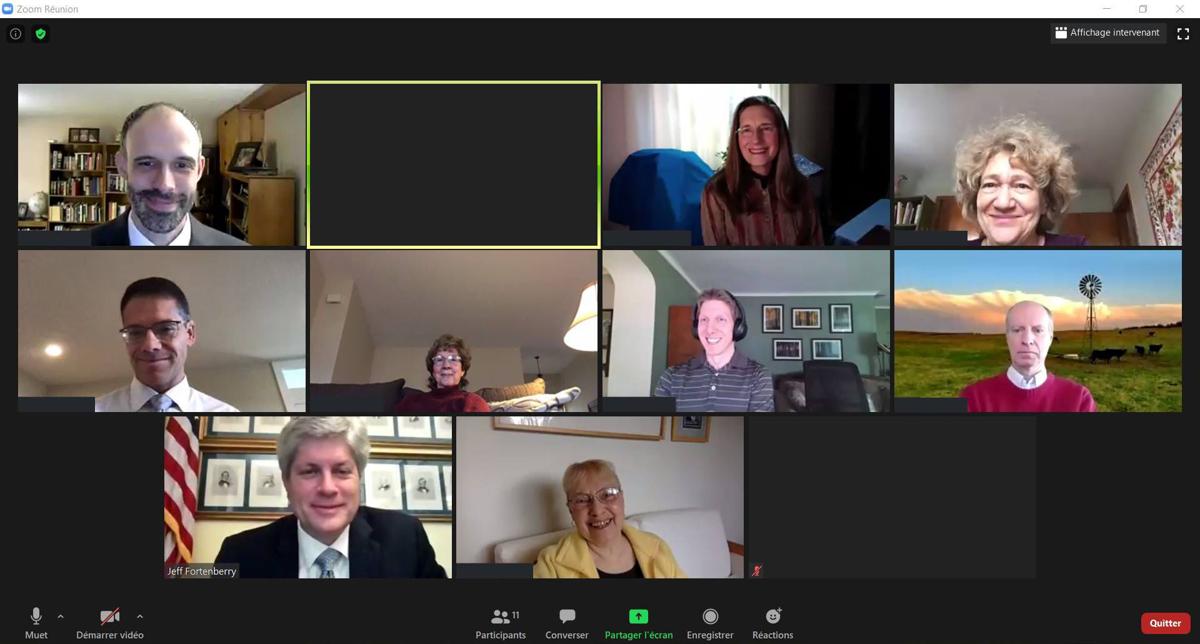 Citizens' Climate Lobby members meet with 1st District Rep. Jeff Fortenberry over Zoom during the pandemic. The Lincoln chapter works to educate the public and pass legislation to slow climate change via a tax on carbon emissions returned to taxpayers as a dividend.

Becky Seth had lots of plans when she retired as head naturalist at Pioneers Park Nature Center in 2012.

Co-leader of the Citizens' Climate Lobby wasn’t one of them.

But she’d attended a workshop that October and heard the CEO of the grassroots advocacy organization speak about the growing climate crisis and the commonsense way the climate lobby was confronting it.

A few weeks later, a pair of acquaintances took her out for coffee and convinced her she’d be a good fit to become one of the leaders of the newly forming chapter.

It turns out, she was.

“It aligns with values from my faith. The belief in building respectful relationships, working for what we want rather than what we’re against.”

It’s an organization that is hopeful, she said. Bridge-building. Nonpartisan.

They have a singular focus: Reducing our reliance on fossil fuels by putting a tax on carbon.

A federal tax at the source and returned as a dividend to taxpayers — a financial nudge for companies to explore sustainable alternatives and to bring awareness to consumers, too.

“It’s very much a market-based solution,” said Lisa Lee, a CCL member and lifelong Republican who moved to Lincoln in 2010.

Greenhouse gases? What were those?

“I was a typical skeptic,” she said. “I became this born-again climate change person and when I heard about the carbon dividend, I was sold.”

I met Seth and Lee — the Democrat and the Republican — over Zoom last week. They were in little boxes on my laptop, along with fellow cohorts in the Lincoln chapter of the international movement.

I’d searched their names before we chatted. Found their letters to the editor and opinion pieces, well-written and persuasive.

They were young and old, from a junior in college (Kat Woerner) to a 78-year-old semi-retired psychologist, Laurel Van Ham, who joined the Lincoln chapter in its first year.

Armed with its singular focus, members call and write their representatives. They try to meet them in person (or via Zoom) twice a year. They send thank you notes. Occasionally, cookies.

For two years, they’ve sent college students on a road trip to Washington, D.C., for the organization’s national conference and to lobby for the carbon tax bill.

“It’s one of the things I’m proud of,” Seth said. “It gave them a taste of what citizenship could be.”

The Lincoln chapter has 700 names on its email list and 20 members — not always the same members — who show up at its monthly meetings.

Christian Nielsen is usually among that number. Nielsen grew up on a farm in the southeast corner of Colorado, already knowing the importance of caring for the land and water. After he moved here with his partner two years ago, he came across the group’s table at the College View Farmers Market.

“I’m on the right side of the political spectrum, and I felt politically homeless for a while,” the 27-year-old said. “I find CCL a place where I can be me.”

He studied physical geography in college and works for the state. He likes the group's focus on a solution. That there was no vitriol, a rarity in today’s mud-slinging, opposition-stomping world.

The common ground they all have is concern for the planet and the impact of rising levels of carbon — greenhouse gases — on all of us.

The Citizens' Climate Lobby gives them the tools to put the concern into action.

“They show everyday citizens how to reach out politically,” Nielsen said. “We just think everyone wins when people are engaged in democracy.”

When Van Ham wrote about the bill they support — the Energy Innovation and Climate Dividend Act — in a Journal Star op-ed in 2019, she began this way:

“A livable world for all of our children and grandchildren is what four Nebraska chapters of Citizens' Climate Lobby advocate for each day.”

She ended it this way: “We strongly encourage Sens. Deb Fischer and Ben Sasse, and Reps. Jeff Fortenberry, Don Bacon and Adrian Smith to co-sponsor and support these bills. We need their voices at the table to protect the future of all Nebraskans.”

So far, none of Nebraska’s delegation has answered that call.

That natural world is important to her, Van Ham told me on that Zoom call.

As a woman of faith, she feels the responsibility of stewardship for it and for the humans who live here, especially those who suffer most from climate change, many of them poor and living with the effects of flood, famine, drought, civil unrest.

Local View: The heart of being conservative

The social cost of carbon is so much more than what we pay when we heat our homes or pump gas, said Woerner, the college student.

“The true cost of dirty air and dirty water, floods and fires is much higher if we actually had to pay it.”

They aren’t alone in knowing this inconvenient truth.

“Many of the oil companies are already realizing it’s time,” Van Ham said. “Increasingly, people are aware there is climate change and we need to do something about it.”

It’s not about blame, Lee said.

“We didn’t understand the side effects of fossil fuels when we began using them. It’s not about being negative; it’s about acknowledging that we need to make that shift to more sustainable energy.”

Change is hard, Seth said. It’s hard to envision. A carbon tax isn’t a “silver bullet,” she said. It’s a tool. A way to start making a difference.

It’s been more than eight years since she retired as a naturalist. The world keeps getting hotter.

She goes on nudging because she believes halting climate change is our most pressing challenge.

Because she cares about inequality.

Because the Earth we are leaving our children and grandchildren is so much less than the one she enjoyed.

Because when she gets discouraged, she can look to the others in the group to jump in, positive, inspiring, dedicated.

Looking for other fantastic human beings — of all political persuasions — to join them.

Local View: How carbon taxes can be popular

To get involved with the Citizens Climate Lobby or learn more about the Lincoln chapter, visit citizensclimatelobby.org

"We must act to protect our youth from this discredited practice," said Lincoln City Councilman James Michael Bowers. "LGBTQ+ youth do not need to be cured."

Cindy Lange-Kubick: Eviction — what happens when your home is gone?

The Eviction exhibit at the Nebraska History Museum tells the story of eviction in America and in Nebraska, who it hurts the most and how to make change.

Singer and actor George Randol sang on Broadway and championed film for Black actors and crews in Hollywood in the 1930s. After he married a Lincoln woman, he made his home here and shared his talents with the community.

Cindy Lange-Kubick: State champion wrestler went to the mat for his mom

Carson Fehlhafer missed wrestling practice the day he found his mom unconscious in the family's bathroom. But the Centennial junior made his way to the top of the medal stand at the state meet, his miracle mom in the stands to see it.

Aquifers are recovering from the stress of the flash drought of 2012, Nebraska's hottest, driest year on record.

Citizens' Climate Lobby members visit with shoppers at a local farmers market. The Lincoln chapter works to educate the public and pass legislation to slow climate change via a tax on carbon emissions returned to taxpayers as a dividend.

Citizens' Climate Lobby helped send college students to lobby in Washington, D.C., in 2018 and 2019. The Lincoln chapter works to educate the public and pass legislation to slow climate change via a tax on carbon emissions returned to taxpayers as a dividend.

Citizens' Climate Lobby members meet with 1st District Rep. Jeff Fortenberry over Zoom during the pandemic. The Lincoln chapter works to educate the public and pass legislation to slow climate change via a tax on carbon emissions returned to taxpayers as a dividend.