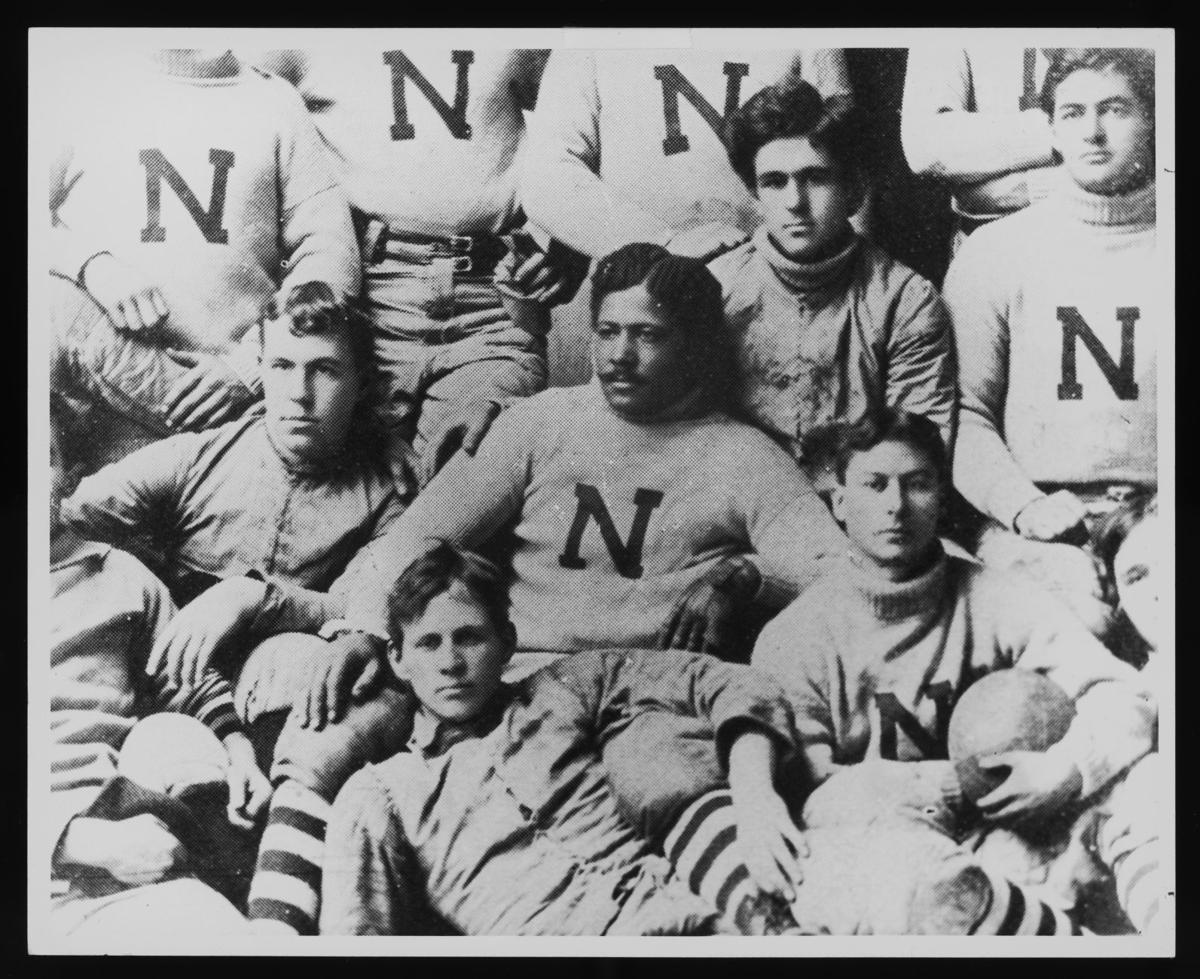 George Flippin was the first African-American member of the University of Nebraska football team. 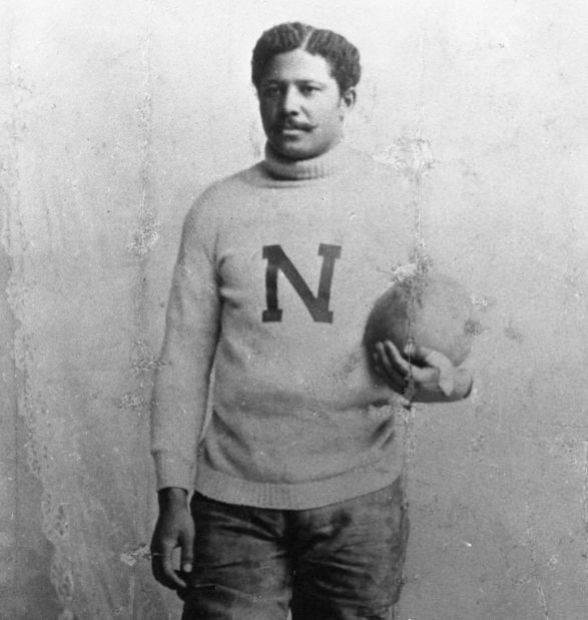 George Flippin attended Nebraska from 1891 to 1894. He was the first black football player for the university. 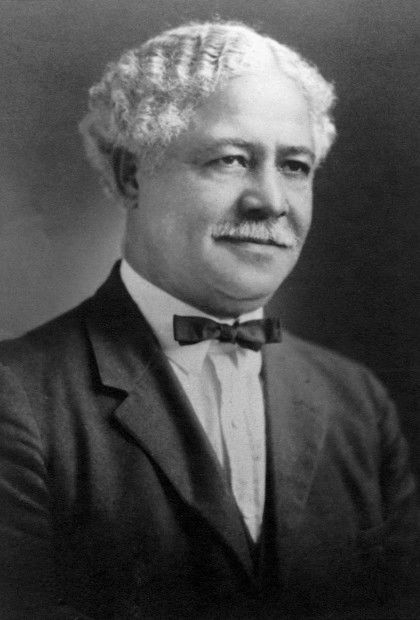 George Flippin was the first black athlete at the University of Nebraska. 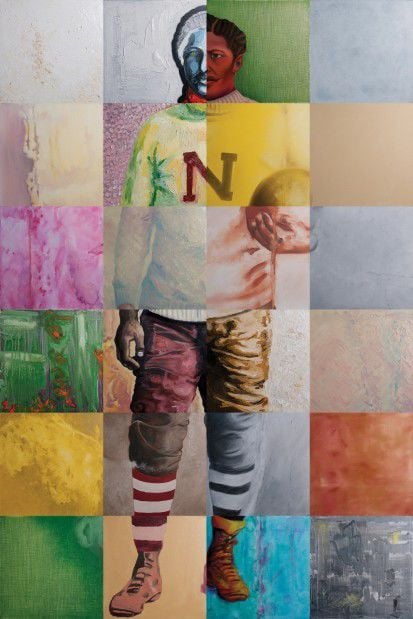 His arms spread wide, taking his space, as if he were embracing his fellow Bugeaters.

George Flippin sports a mustache in that frozen image, his hair sleek and wavy, parted on the side.

The picture makes a statement about a black man who took the football field at NU in 1892 and broke a racial barrier, comfortable in his own skin.

“Dr. G.O. Flippin of this city died at hospital here after an illness of five months,” a Lincoln Star story with a Stromsburg dateline read that day. “While studying at the University of Nebraska in the early nineties, Dr. Flippin, a negro, gained prominence as one of the first great Cornhusker football players. He was a powerful plunging halfback.”

The “colored halfback” was the term sports reporters repeated. A footballer who wrestled and ran track and played baseball, too.

The star player made his way into the Nebraska Football Hall of Fame in 1974. He found himself on a list of 150 notable Nebraskans in 2017, the year the state celebrated its sesquicentennial.

Another photo appeared that celebratory year, Flippin standing alone in football pants and striped socks, a pigskin under one arm. The accompanying text recounted a game the University of Missouri refused to play against Nebraska because Flippin was on the roster.

And the way he’d responded years later: "Was I any good? Why, yes. In fact, one time, I was so good I beat the University of Missouri all by myself."

The fleet-footed athlete was president of the Palladian Literary Society, sergeant-at-arms of the college debate club, and voted captain of the 1893 football squad by his teammates.

A decision the new coach vetoed.

“It takes a man with brains to be a captain,” Frank Crawford reportedly said. “All there is to Flippin is brute force.”

The brute-force halfback earned his medical degree in Illinois and became Dr. Flippin of Stromsburg. He and his physician father established a hospital in the Polk County town.

He had a son named Robert and a daughter named Dorothy with his first wife, Georgia, and scandalized some when he divorced her and married the head nurse at the hospital, a white woman of Swedish descent.

A lawsuit against a York cafe that refused him service earned him this editorial in a Hamilton County paper: “We know nothing admirable about him except his nerve. With his … habit of marrying white blood, he is a deteriorating influence in the state, and many people are ashamed that he is a seemingly prominent and influential member of his community.”

Flippin did not bend.

He was a dedicated country doctor who made house calls, delivered babies and tended the sick whether they had money to pay his fee or not.

The man who had once run for touchdowns, picked up an injured boy from the street and carried him all the way home, blocks farther than a football field, where he tended to his leg and left him with his mother.

His bronze silhouette is one of six on the Tunnel Walk doors at Memorial Stadium.

A mural in his honor graces the multicultural center on the other side of campus.

Flippin’s black hair turned white. He posed for photos in a suit and bow tie, wavy hair peeking out from his felt-brimmed hat.

He traveled to Europe often to learn the latest surgical techniques.

He filled his library with collections of short stories and the works of Charles Dickens and poetry. “The poem ‘Make Me a Man,’ by O. Lawrence Hawthorne was a permanent fixture on Flippin’s desk,” wrote Kathy Nelson in her book “More Than Football: George Flippin’s Stromsburg Years.”

Nelson wrote about the racism Flippin faced living in Stromsburg and during his years in Lincoln.

About the time he was denied access to a local bath house: “OBJECTED TO HIS COLOR — Civil Rights Bill Violated by a Lincoln Institution,” the headline from August 1893 read.

About the November 1892 night in Omaha after a 10-10 tie with Iowa, when the team stopped at the Paxton Hotel for the night and Flippin was refused a room, his teammates standing beside him until the proprietor relented.

He was turned away from an opera house in Denver, too, after the Bugeaters played the local team.

His entire team boycotted the opera that night, the newspapers said, and in 1892, when Missouri sent word its squad wasn’t likely to share a field with a “colored player,” Nebraska fired back: “The color line has not and never will be drawn in this university.”

Nelson uncovered old speeches Flippin gave in his Lincoln years: “The Republic cannot stand half slave and half master. The problem must be faced while the difficulties can be overcome.”

He did not advocate for more laws or sympathy that night at Quinn Chapel. “All we ask for is the enforcement of the laws as they are, the right and opportunity to stand or to fall as we deserve, and we would demand that public sentiment recognize the majesty of the mind and not the color of the face.”

Years later, he was charged with illegally voting and was found not guilty. He was charged with assaulting a Stromsburg man who slandered him in the town paper, calling him a n***** and besmirching his wife’s name.

He drove fast cars and raised Barred Plymouth Rock pheasants and rose high in the ranks of colored Masons.

He tended to his many patients, most of them white. He helped raise his grandson. He returned to Lincoln to cheer a football team called the Cornhuskers.

In the 1920s, the KKK came to Polk County, holding meetings at the Stromsburg Country Club and celebrating Klucker Day with a concert, speeches about Americanism and an evening-ending baseball game.

“There is no account of George Flippin publicly speaking out against the Klan,” Nelson wrote. “As long as they did not directly target him or his family, he did not make his views public.”

He was busy, she wrote, making people better.

Flippin was 61 when he died in the hospital he founded, five months after a bout of influenza that weakened his heart.

The church was packed for the funeral of the “colored halfback” who went on to become a beloved doctor.

It was believed to be the largest the town had ever seen.

Sheriff: No evidence of impairment in Woods crash

Sheriff: No evidence of impairment in Woods crash

In 1891, Nebraska's second year with an official football team, George Flippin — the son of a freed slave — became the first black player at NU.

George Flippin was the first African-American member of the University of Nebraska football team.

George Flippin attended Nebraska from 1891 to 1894. He was the first black football player for the university.

George Flippin was the first black athlete at the University of Nebraska.