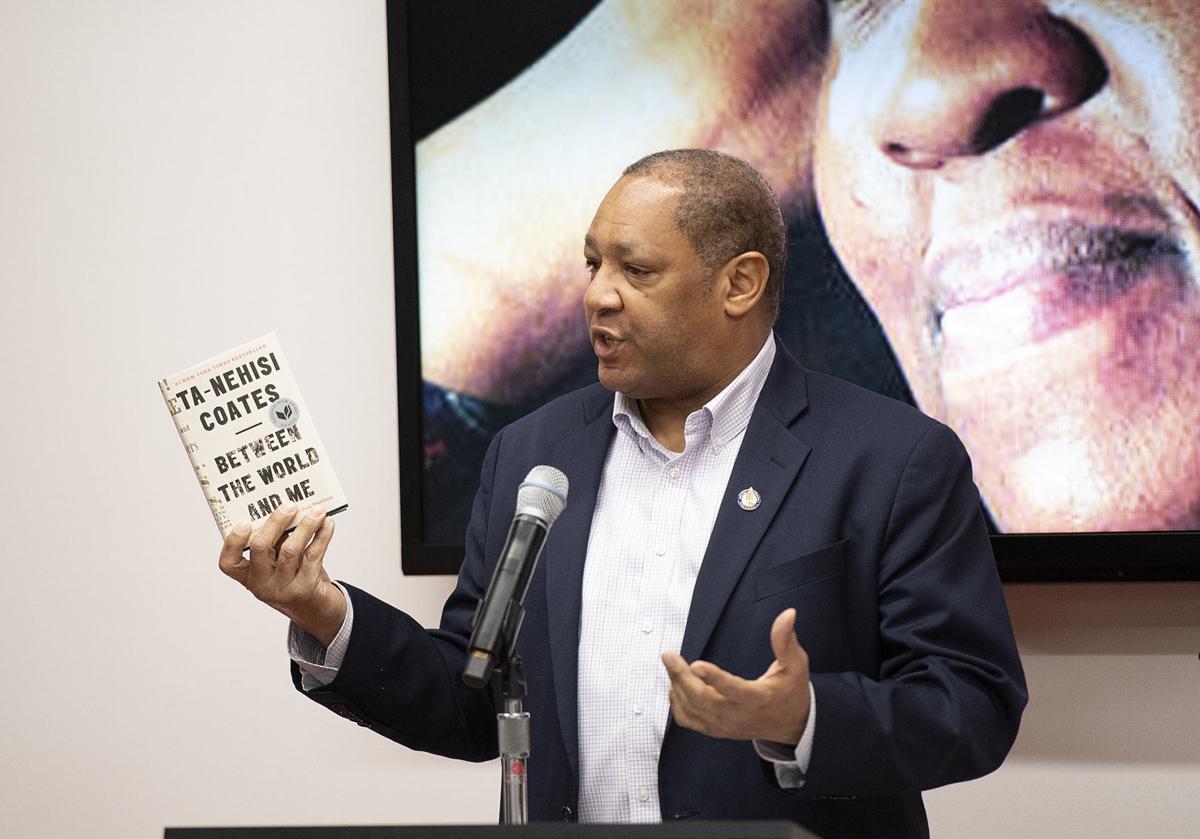 Lincoln City Councilman Bennie Shobe refers to "Between The World And Me," by Ta-Nehisi Coates, while introducing his reading of "The Fire Next Time," by James Baldwin, at Southeast Community College's African American Read-In on the Lincoln campus Thursday. 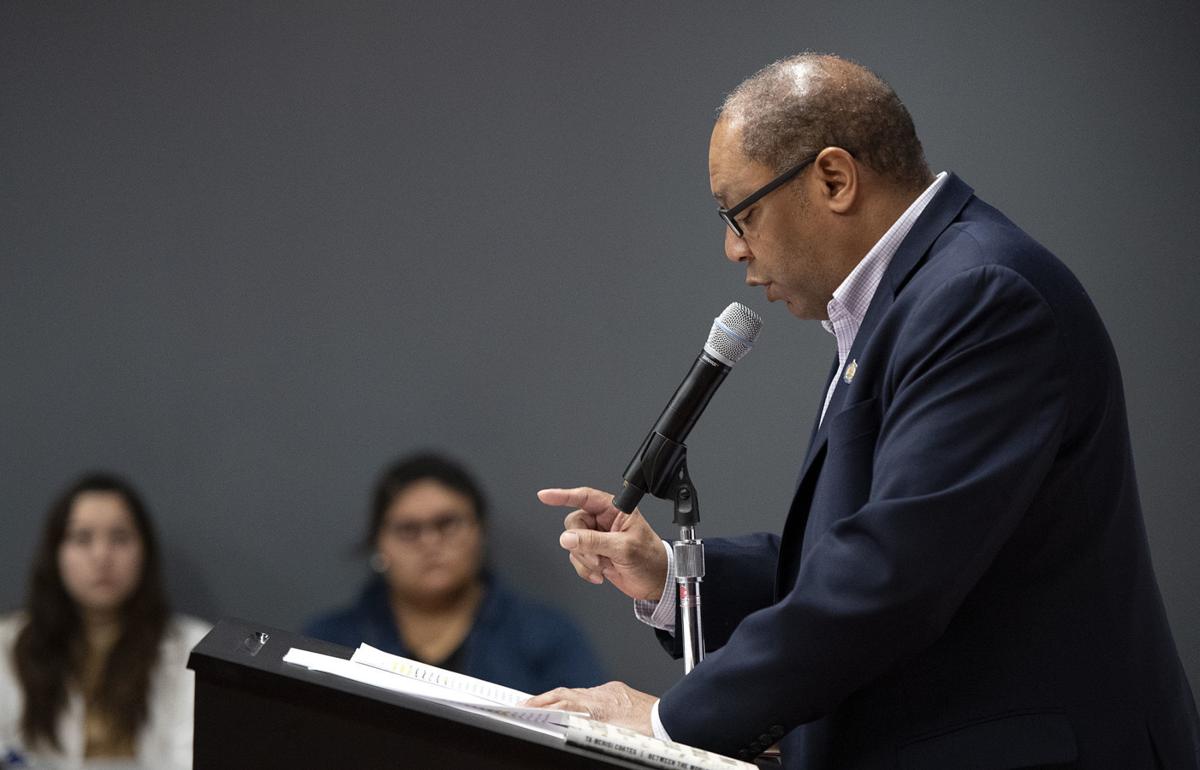 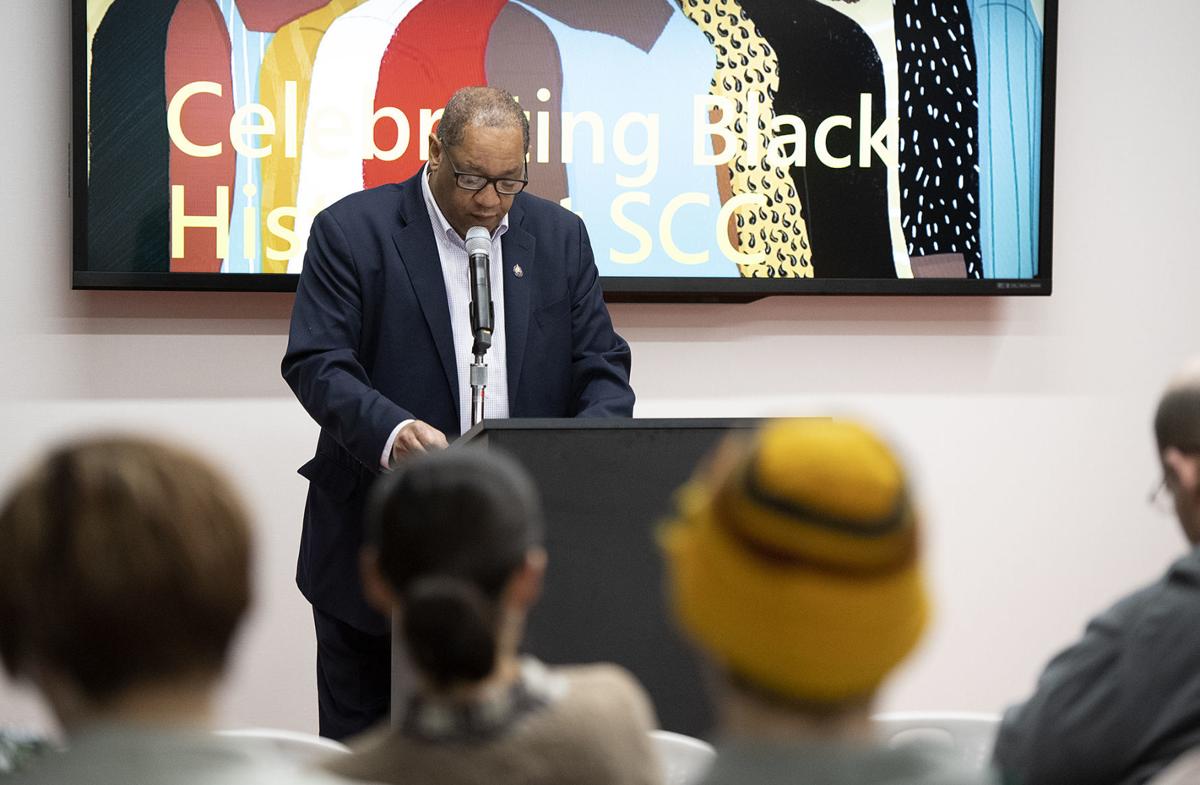 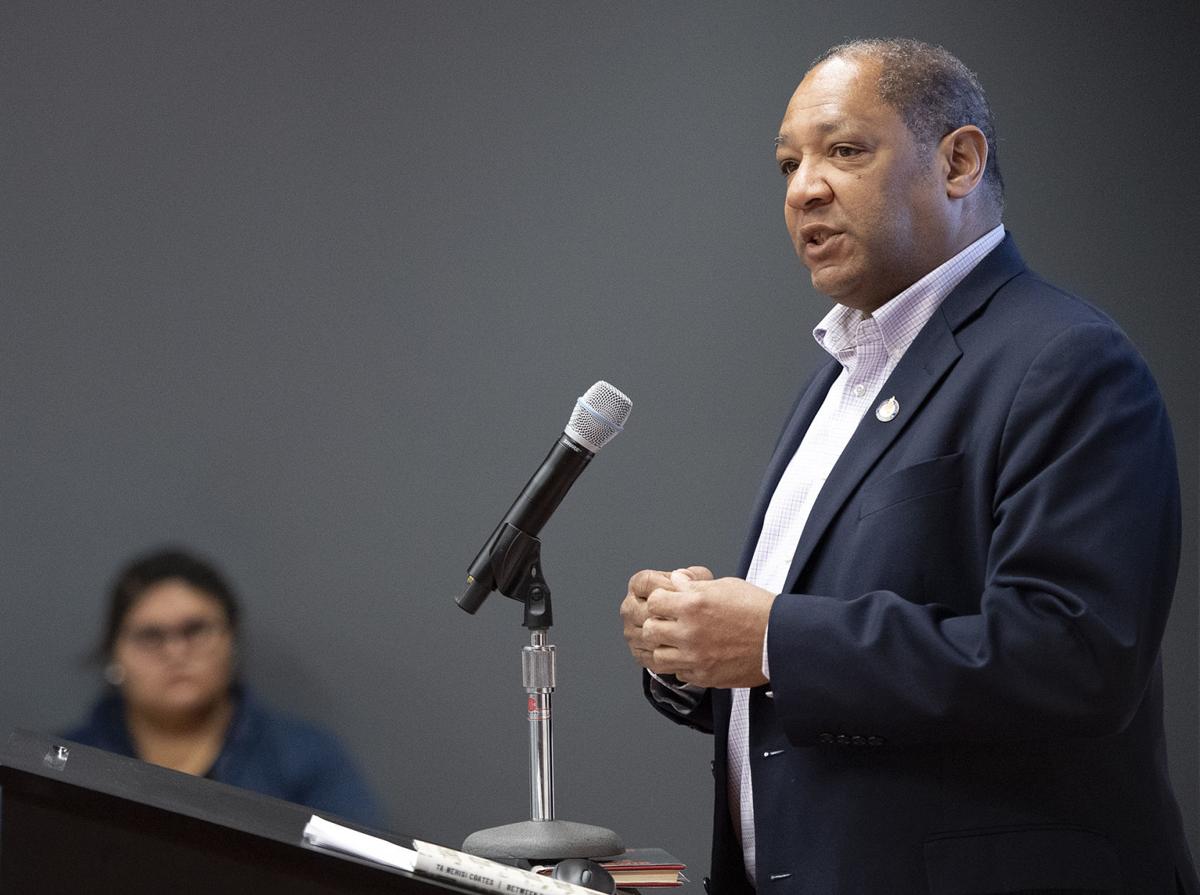 Bennie Shobe showed up at the Black Man Breakfast — the monthly time of food and fellowship he helped dream up and organize — like always in November.

But he wasn’t coming straight to Hy-Vee from home.

“Bennie had already been to three things,” said T.J. McDowell. “That’s one of the things I love about him.”

Shobe always has dozens of dates on his monthly Google calendar, from neighborhood parties in the park to strategic planning meetings in conference rooms.

And that doesn’t count retirement parties and City Council-related affairs or his full-time job as a research analyst at the Department of Labor and the research methods class he teaches at UNL.

Bennie shows up. That’s what everyone says.

But it’s more than making an appearance.

“The unique thing about him is he’s not just in attendance,” says Pete Ferguson. “He’s present. And that says a lot to who he is.”

Ferguson has known Shobe for 20 years, a steady presence at the MLK Youth Rally and March that Ferguson shepherds, a familiar face at news conferences and nonprofit fundraisers and Juneteenth and anything that champions equity, justice and civility.

“He’s always carried himself as someone who is approachable, who cares, who is knowledgeable. He didn’t need the formal title to do what he’s doing.”

Shobe has been a city councilman since 2017, but his history of civic involvement stretches back to 1998, when he arrived in Lincoln to pursue a doctorate.

Greg Rosenboom was a graduate student then, and one day Shobe walked into the computer lab.

“He was his normal, cheery, positive self.”

Rosenboom was having a bad day. He wondered if the student was messing with him.

“I got to know him better, and I discovered, that’s just Bennie.”

The two became close friends, and, in a small group of graduate students, Shobe was the one who was always involved.

He joined the NAACP and eventually became secretary and later president of the Lincoln chapter.

He volunteered for boards and got involved in neighborhood groups. He built relationships.

"There's something about him," Rosenboom says. "People want to know him and be around him."

If he’s met you before, he remembers your name. (Although people have trouble remembering his. Among the names he’s been called and answers to: Bernie. Danny. Denny. Kenny. Jimmy.)

And if you’re meeting for the first time, he wants to know more about you.

“He’s a connector,” says Deane Finnegan. “He connects the dots. He connects people.”

Finnegan met Shobe through her husband, Gerry, both men involved in Democratic politics and a shared passion for space and flying.

Shobe was a 2009 class member of the Academy of Local Leaders, a Leadership Lincoln project designed to bring more minorities onto boards that lacked diversity.

“I watched Bennie in class, finding things in common with people, not the things that separated them,” said Finnegan, who retired as Leadership Lincoln’s director five years ago.

“He understands consensus building and bringing people together for the common good.”

Besides, he was from the South, like she was. He liked banana pudding, like she did. His dad spent his career working in the Coca-Cola bottling plant in Bowling Green, Kentucky, and she’d been born in the Georgia town where Coke got its start.

“On Sundays, Bennie would come over here, and I’d fix him lemonade and cookies and we would talk and bounce ideas off each other,” she said. “I just love him.”

Kate Heltzel loves him, too. The director of the Unicameral Information Office and Shobe have been partners for 15 years. They met on the city bus, both of them commuting to class at UNL.

He was relentlessly charming, she says. Asking about her life, singing her made-up lyrics to nonexistent songs.

She was an introvert. She didn’t talk to people on public transportation. She was suspicious: Who does that without an angle?

“I realized over time that he was that way with everyone on the bus — and on campus and everywhere else.”

“I’m very lucky,” Shobe says. “I like people, and I have the ability to form relationships with people. I blame my mom for that, and my dad a little bit.”

The 59-year-old grew up on a small acreage, the oldest of four. His dad taught him to share and help others. His mom taught him empathy and to be a good listener.

They didn’t have a television until he was almost old enough to drive. He read the TV Guide cover to cover and developed a lifelong love of pop culture.

He was fascinated with space and wanted to be an astronaut and a pilot.

He worked at a grocery store and he still loves them — their histories and cultures.

When he arrived in Lincoln, he didn't know "Nebraska from Alaska," Shobe says. He didn't finish that doctorate, but he stayed.

"I tell people, I'm a Kentuckian by birth, but a Nebraskan by choice."

The voluntary Nebraskan took StarTran to Southeast Community College to participate in a Black History Month read-in Thursday. (An essay from James Baldwin’s “The Fire Next Time.”)

On the bus ride from downtown, he was recognized by a fellow passenger who spent the next 20 minutes expressing his views on public transportation in Lincoln.

Shobe filed it away.

“I really want to spend time talking to our community,” he says. “And listening.”

And he says this: “I think there is something magical happening here, and I want to be a part of bridging those little chasms we have between cultures and social classes.”

When he ran for his at-large council seat, he told a newspaper reporter: “Everyone is equal, and everyone deserves an equal opportunity. I think about that a lot.”

He does that for Lincoln, Ferguson says. In the way black leaders such as Leola Bullock and Lela Shanks and his own mom, Alita Ferguson, did.

“He took on that role,” he says. “Not only to assure there is representation, but for the community to know they’re not alone.”

Shobe isn’t in politics for the acclaim, Finnegan says. And he keeps mum about his small acts of kindness, too, she says. Shoveling snow and mowing lawns for people who are unable.

Cindy Lange-Kubick: 'He’s defying stereotypes each and every time he interacts with people,' Feb. 11, 2020

“He does those quiet things that are so important. I just can’t say enough about that part of him.”

And about the other part, the part where he seems to be everywhere that leads Ferguson to fondly call his friend “the African American Waldo.”

Finnegan has a thought.

UNL student preparing for run across the country to raise money, awareness for cancer

This summer, Han Le will participate in a more than 4,500-mile run across the country from June 21-Aug. 8 to raise money and awareness for young adults affected by cancer.

Nebraska celebrates its 153rd anniversary as a state today. Here's a look at Statehood Day celebrations through the years.

Sally Ganem, Nebraska's first lady from 2005 to 2015 when her husband, Dave Heineman, served as governor, is seeking political office.

Matt Wills makes one 100-mile ride each month. He recently hit a milestone of 100 rides.

Like many of my colleagues at the Journal Star, I see this town differently. We built landmarks based on the stories we covered and discussed at length in the newsroom.

The breakfast traditionally kicks off a week of events honoring Dr. Martin Luther King Jr. on the Friday before the national holiday honoring the civil rights leader.

Lincoln City Councilman Bennie Shobe refers to "Between The World And Me," by Ta-Nehisi Coates, while introducing his reading of "The Fire Next Time," by James Baldwin, at Southeast Community College's African American Read-In on the Lincoln campus Thursday.