Cindy Lange-Kubick: Abbey Schnell, the Lincoln woman who inspired an army of cheerleaders
View Comments
Share this
{{featured_button_text}}
1 of 2 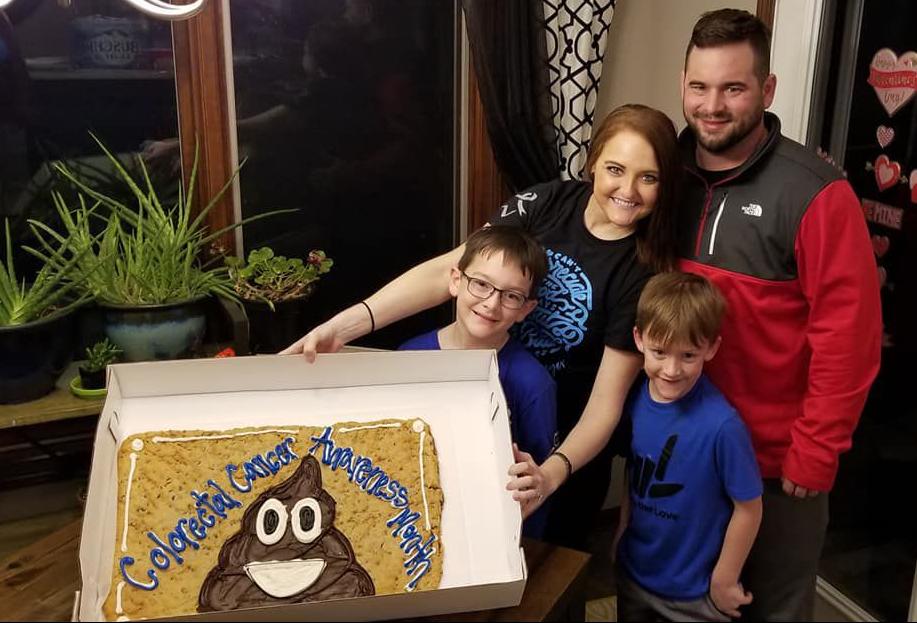 Abbey Schnell and her husband, Adam, and sons Urijah and Remy in early March. Abbey was diagnosed with colon cancer in 2012 at the age of 25. She fought to stay alive for her family and worked to educate others about colon cancer. She died Tuesday. 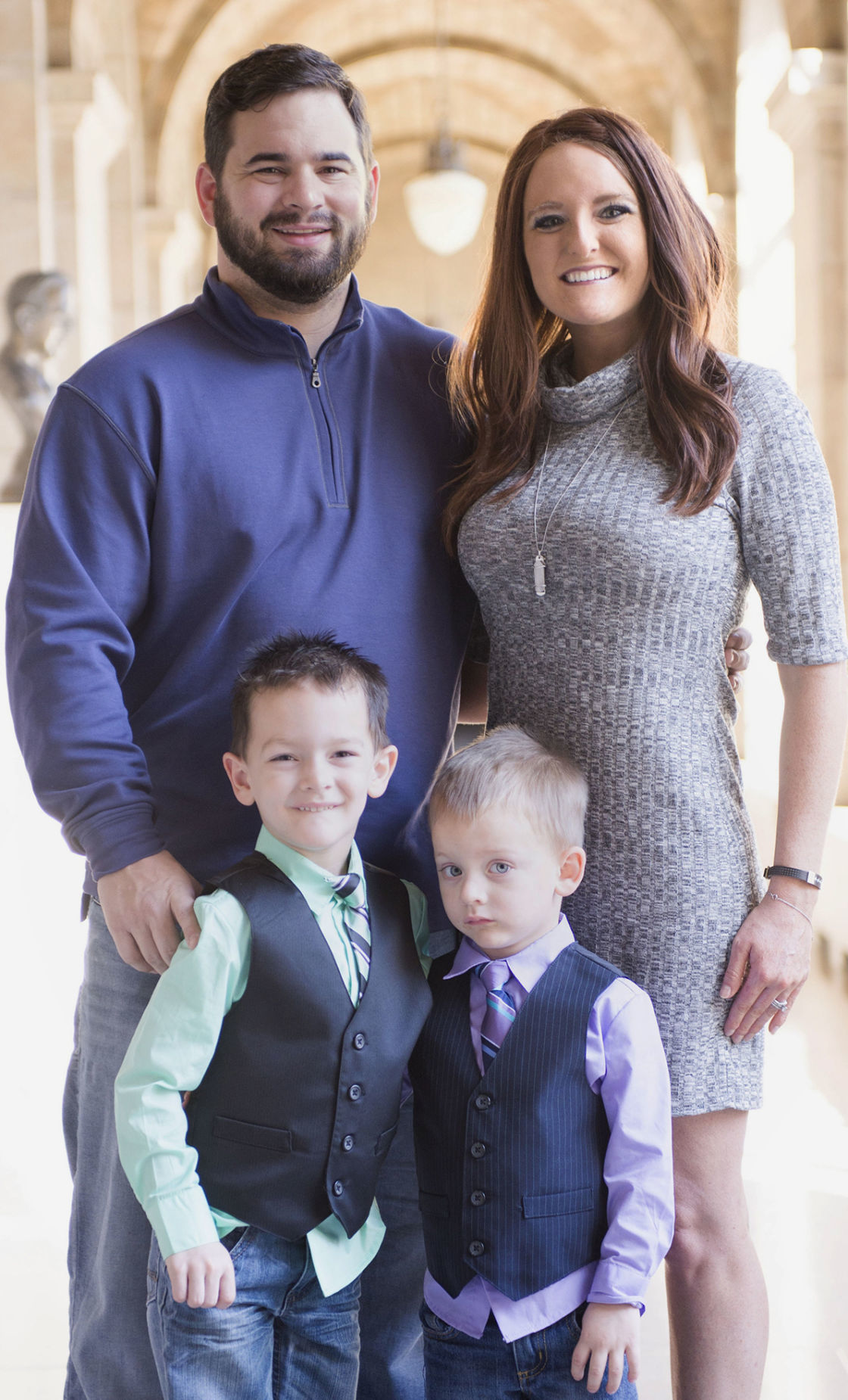 Abbey Schnell and her husband Adam with their two boys Urijah and Remy in 2016. Abbey Schnell died this week of colon cancer, seven years after her diagnosis.

I called the number on the post-it note Thursday and now I have a date.

I’m 58, long past the recommended age for a baseline exam, and my doctor’s office has been hounding me to the point of harassment.

They’ve called and left messages, which I promptly deleted.

They followed up with a letter: Have you scheduled your appointment yet? We care about you!

My stubbornness — Don’t tell me what I have to do — had kept me from picking up the phone.

And then there was the inconvenience. Missing work, the special colon-clearing medication and the twilight-inducing drugs and the whole idea of a wand with a camera snaking through my insides.

Then I thought about Abbey Schnell.

Abbey died Tuesday from colon cancer, her family at her side.

A 32-year-old who lived in Lincoln with her husband, Adam, and their two boys, Urijah and Remy. She was beautiful and fierce and kind and funny. She played softball and sand volleyball.

She worked as an underwriter. She called herself the momager of the Schnell household. She called Adam her rock.

I met her in the summer of 2016. She’d just returned from a retreat in the woods near Nashville, Tennessee. She and 11 others who had been chosen by the Colon Club to appear in four-page magazine photo spreads.

Stories of strong men and women living with colorectal cancer, all of them under 50 when they were diagnosed.

The goal: to take away stigma, to promote awareness and to encourage people to pay attention to their bodies and the symptoms of colon cancer.

Abbey wanted that, too.

The Lincoln Southwest High School and Doane College graduate had thought the blood in her stools during her second pregnancy meant she had hemorrhoids.

Her doctor thought so, too.

Instead, two weeks after she came home from the hospital with her second son she experienced uncontrolled rectal bleeding.

A colonoscopy followed and a diagnosis of colon cancer that, despite surgery, chemotherapy and radiation, metastasized to her lungs.

For seven years, she fought hard.

She scheduled chemo for Thursdays so she wouldn’t miss work. She cooked healthy meals. She taught her boys to throw a softball.

She lived by her grandfather’s motto, tattooed across her right foot: Hope for the best. Expect the worst. Take what you get.

She lived for her boys.

And she had an army of cheerleaders, 1,400 followers who called themselves Abbey’s Supporters on Facebook.

In January, she flew to Arizona with her family for a dream vacation and when she got back she broke the news that the chemo wasn’t working and there would be no more.

“Keep my family in your prayers especially these boys,” she wrote on Facebook. “It's not fair to them but it's life.”

Two weeks ago, friends from her 2016 Colon Club retreat descended on Lincoln to surprise her.

They threw axes and toured Robber's Cave and drank beer and cut into a big cookie decorated with a frosting poo emoji and four words in blue: Colorectal Cancer Awareness Month.

An annual reminder for people to watch for signs of colorectal cancer and to take them seriously.

During her illness, Abbey educated people.

She spoke at National Cancer Day at the zoo, at CHI Saint Elizabeth, anytime anyone asked.

In one of Abbey’s last posts, she thanked everyone for their prayers and good wishes and help. She said she was growing tired, and to forgive her for not responding personally.

She was burrowing down, she said. Making memories for her boys and teaching Adam the things he needed to know when she was gone.

“I think he’s catching on more and more,” she wrote, adding a smiley face.

You can still find that strong woman from Lincoln on the Colon Club’s website.

She’s wearing a red scarf on her head tied on top, like Rosie the Riveter. She’s flexing one arm, showing off her biceps.

She’s wearing laced-up boots, her shirt riding high to show off her belly, her colostomy bag poking out the top of her jean shorts.

Abbey at her photo shoot.

Abbey had to apply to be accepted on the retreat. She wrote her own story, describing herself in the third person.

She wrote: “Abbey likes to have her positive attitude be contagious.”

Cindy Lange-Kubick: 'How would you feel … if your father was killed in front of your eyes?'

The Yazidi friends sit on brown leather couches in the west Lincoln living room, where Khairi Hesso lives with his wife and three children.

The bone marrow donor walked down the stairs of his buddy’s house Sunday night, early for his 70th birthday party, on his way to check out the…

Cindy Lange-Kubick: Pete Ferguson holding his mother in his hands, memories in the face of Alzheimer's

Pete Ferguson carries his mom into the CountryHouse on Tuesday afternoon.

Cindy Lange-Kubick: Postcards from Fremont, a view from the water-logged ground

She listened to the story from the small plane, looking down at three rivers that had merged to form a sea over the state she loves.

On Friday morning, Steve Singleton put on his waders and grabbed a flashlight and walked into his house on Chris Lake.

Acting as surrogate, grandmother gives birth to granddaughter in Omaha

A Gretna woman gave birth to a healthy baby girl early Monday morning after serving as a surrogate mother for her son and his husband.

Cindy Lange-Kubick: Down in Arkansas, missing home and those Huskers

At its most recent gathering, the expats in Arkansas doubled down on their agenda.

Last fall, before the start of the endless winter, Gabriella Parsons walked around Lincoln.

If you look closely, you might find some similarities between Karen Freimund Wills and the title character she’ll play in “Mame” at the Lincol…

Abbey Schnell and her husband, Adam, and sons Urijah and Remy in early March. Abbey was diagnosed with colon cancer in 2012 at the age of 25. She fought to stay alive for her family and worked to educate others about colon cancer. She died Tuesday.

Abbey Schnell and her husband Adam with their two boys Urijah and Remy in 2016. Abbey Schnell died this week of colon cancer, seven years after her diagnosis.