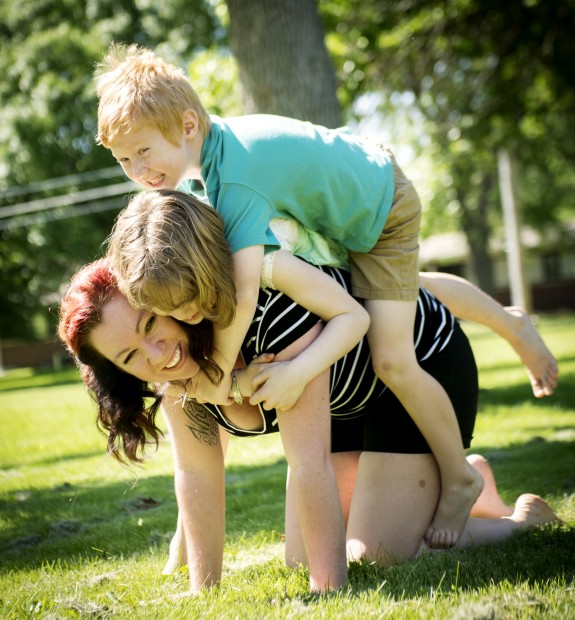 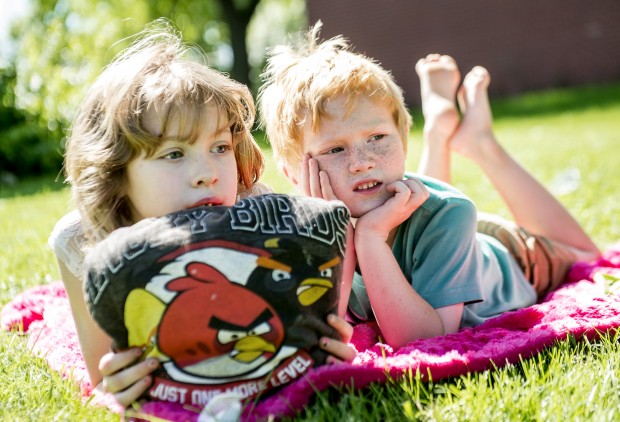 Izabel Penfield (left) and her brother Milo watch cars go by while hugging a memory pillow made from one of their dad's T-shirts. 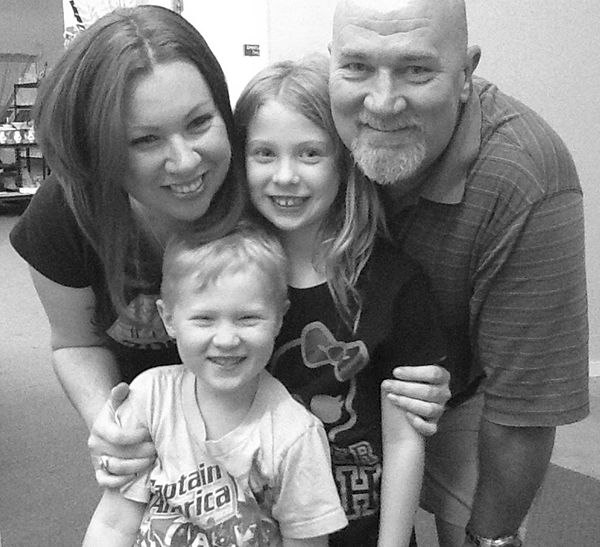 Rainee Penfield poses with her husband Milo Sr., and their children Milo and Izabel.

Freckle-faced Milo, named for his daddy, is busy playing Fruit Ninjas on his iPad.

Long-legged Izabel -- Izzy, for short -- is showing off her hermit crabs, Tickler, the bad crab, and Sunshine, the good crab.

Their mom is talking in the living room of the duplex in northwest Lincoln, where they landed four months after their world crashed.

“We got here in May,” says Rainee Penfield, 33, a registered nurse with dark red hair and her late husband’s signature tattooed on her forearm, LOVE, M.

Her husband, Milo Sr., died Feb. 27, 2012, in Yuma, Ariz. Rainee came home that day to find him, a suicide. Milo was 48, with grown kids and grandkids. The police officer and bomb squad technician who’d served 20 years in the Marines as a gunnery sergeant ended up with PTSD.

He was the nighttime daddy who sang Milo and Izzy to sleep by crooning “Baby Mine” from “Dumbo.” The daddy who took them fishing and to the ocean and for rides on his Harley and came to their schools to talk about being a policeman, showing their classmates his squad car with the flashing lights.

But life had become a dark downward spiral for both of them in the months before his death, and when he was gone, the little light she had left was gone, too.

Milo, 5, cried, too. Mostly at bedtime, missing his daddy’s singing, waking with nightmares.

Eight-year-old Izzy, away for the summer with relatives, had shut down.

Rainee grew up in Columbus and after she moved to Arizona and married Milo, her family moved to Lincoln.

The young widow followed, moving in with her mom until she found her balance.

She can’t remember now how she found out about the camp. HUGS -- Helping Us Grieve Successfully. A Saturday at the zoo for kids who had lost a loved one, and a space for their parents to gather, too.

But she called the number, signed Milo up.

That was the start of climbing out.

“It takes away the isolation,” said Nancy Gabelman, a bereavement coordinator who has been involved with the camp for more than a decade.

“It gives kids and families an actual time and place to do whatever grieving they need to do at this point in time.”

Kids come who have lost siblings, grandparents, parents, friends. They come soon after a death or months later.

“Lincoln is a nice-sized town where we can do that.”

Rainee felt so alone in her grief.

She drove to the zoo that Saturday last June.

Milo went off with the other kids.

Rainee sat down in a room full of adults.

“You just can’t imagine that anyone else is hurting like you’re hurting and then you hear what other people say, and it’s like there’s an immediate bond.”

What she heard helped. Like the woman who told them: It never goes away, but I promise it gets better.

And the leader who said: Thank you for having the courage to come and to bring your kids.

He made a pillow out of one of his dad’s T-shirts, the Angry Birds shirt they gave him the Christmas before he died, the shirt that smelled like Aqua Di Gio, his favorite cologne.

He met other kids.

They saw the animals, read picture books, decorated flower pots in memory of the people they lost, lined them up and made a pathway, walked it with their parents at the end of the day.

Thursday, Rainee tells Milo to go get his pillow.

He brings it from his room, the stuffing lumpy and loose.

He used to sleep with it, says Rainee. Now it’s just there.

After HUGS Camp, they started going to Mourning Hope’s weekly sessions. They found Mosaic, a church that meets at Antelope Park.

Now Izzy and Milo talk about their daddy.

The daddy who hung Milo upside down by his feet.

The daddy who smelled good.

The daddy who liked hippos and gorillas.

The daddy who made sushi.

The daddy whose face is on the wall, smiling.

Last year, she was drowning, says Rainee. Her kids were drowning with her.

Saturday, they’re all going to camp.

Registration is open for HUGS Camp until Monday.

The board meeting was over and they were enjoying appetizers at Applebee’s when someone mentioned getting inked.

Izabel Penfield (left) and her brother Milo watch cars go by while hugging a memory pillow made from one of their dad's T-shirts.

Rainee Penfield poses with her husband Milo Sr., and their children Milo and Izabel.