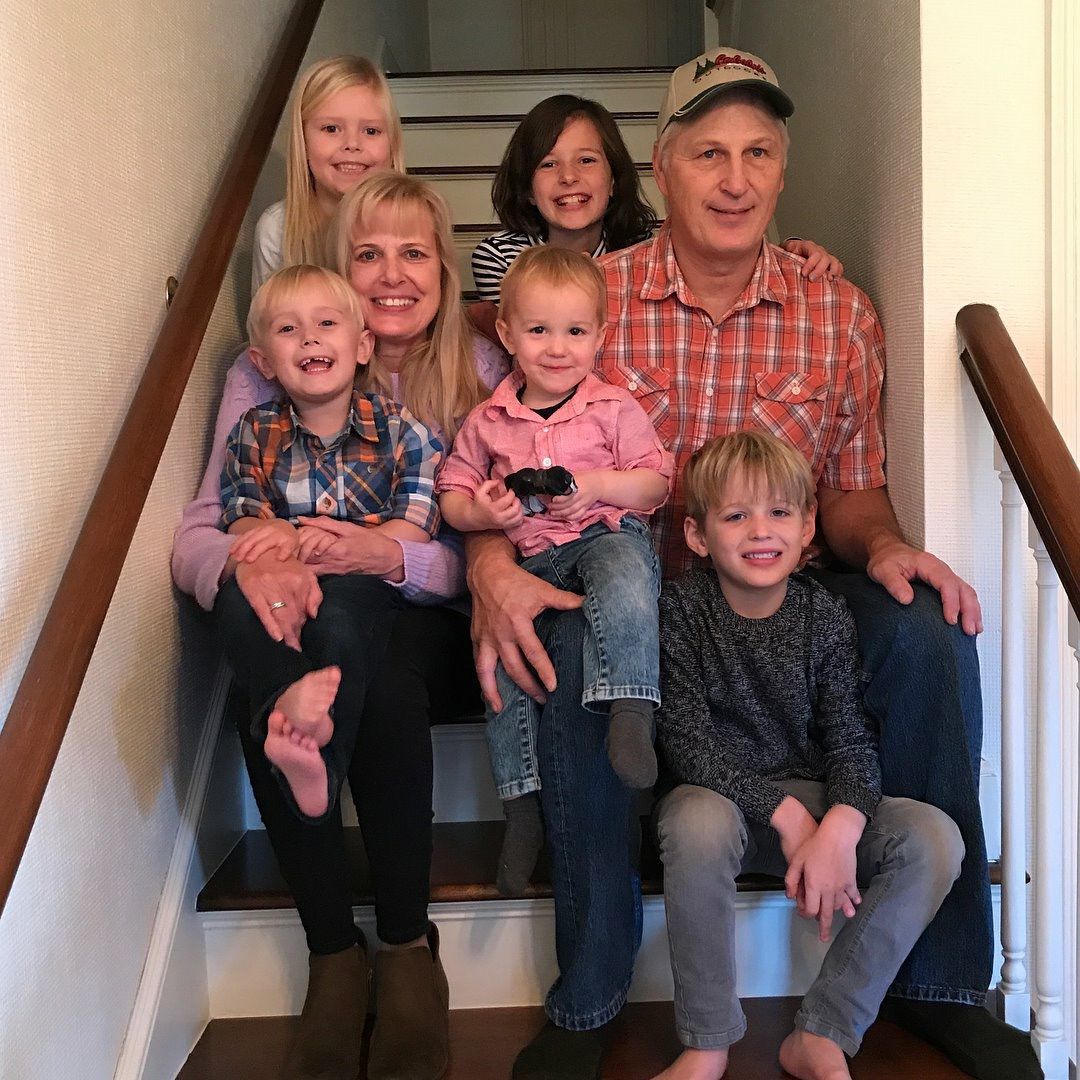 Steve and Deidre Singleton with their grandchildren. The Lincoln couple retired to Chris Lake in Sarpy County in 2016. Their house is still underwater after a levee broke during this month's flood. The couple put everything into their dream home and did not have flood insurance. “It’s just been devastating to them,” said daughter Dani Davis.

Steve and Deidre Singleton's dream house (center) at Chris Lake in Sarpy County was among 300 on the lake that flooded.

On Friday morning, Steve Singleton put on his waders and grabbed a flashlight and walked into his house on Chris Lake.

The dream house — yellow, Deidre’s favorite color — that the couple from Lincoln worked all their lives to own.

It had been a week since the levee that separated Paradise Lane from the Sarpy County farm fields had given way, and the last view the Singletons had of their house was on a live video feed from a helicopter.

All they could see was their roofline, brown water on every side.

A week later, water still reached halfway up the front door, nearly to the windows.

All of the furniture they’d put up on cinder blocks before they evacuated was ruined. Everything they’d lifted onto countertops had floated away.

Steve rescued one painting from the wall, a family heirloom, that somehow escaped the rising water.

“As long as I can remember, their dream was to live on a lake,” said Dani Davis, the couple’s oldest daughter. “It’s just been devastating for them.”

For most of their lives, the Singletons lived in Lincoln.

Steve worked for the telephone company for 41 years, his first job after he came home from four years in the Army.

But the next time she went to the bar with friends, she waited for him to ask again.

They married the next May.

They were coupon clippers and thrifty shoppers. They didn’t take fancy vacations.

Deidre worked part-time jobs and stayed home with their two girls, Dani and Kendra, to be a hands-on mom.

They loved camping and eventually bought a trailer on a lake near Schuyler that Steve converted into a cabin, where the family spent weekends tubing and boating and fishing.

All those years, Steve and Deidre had a goal: Save their money and retire to the water when they were still young enough to enjoy it.

They started looking for places as Steve neared 60 and retirement. He wanted to head down to the Ozarks and live on a lake there, but they had grandkids now and Deidre couldn’t bear to be so far away from the little ones, their own girls and her aging parents.

In 2016, they saw the yellow house on the internet and drove straight to a small lake community between Bellevue and Plattsmouth.

They were too late; another buyer had snatched it up.

But when that deal fell through a week later, the realtor called them: Were they still interested?

They decorated the house with wooden pelicans, fishing nets and starfish.

They had an old speed boat and a Jet Ski. A swing in a backyard tree. A sandy spot of beach for the grandkids.

Steve hung a wooden sign in the living room: A fisherman lives here with the catch of his life.

It was the quintessential lake house.

And they were happy there.

Everything they had went into the 1,900-square-foot ranch.

And now everything is gone.

“We’ve always worked for the future,” Deidre said. “And when you can lose everything in one day, it’s a little overwhelming. You can’t get your mind around it.”

The couple is back in Lincoln now, staying with their daughters and their families.

They didn’t have flood insurance, Steve says. They’d talked to neighbors on the lake about it and were told there had never been a flood in their community of 300 homes.

And the insurance was expensive, thousands of dollars a year.

“You can say coulda, woulda, shoulda,” Deidre says. “But you can’t go back.”

When the weather hit, they kept an eye on it. They had heard Hanson Lake a few miles away was flooding, so they put buffets and dressers up on cinder blocks and piled the counters with chairs and potted plants, knickknacks and stereo speakers.

The power went out that Friday morning and, early in the afternoon, a deputy knocked on the door and told them to evacuate.

They packed enough clothes for three days, loaded up some food and files of paperwork.

The house sat on a concrete slab. At worst, they’d get a few inches of water, they thought. Have to replace some drywall, maybe the appliances and some furniture.

“When we left our house, it (water) wasn’t up to the house,” Steve says. “I thought maybe some water would seep in by the back door.”

Steve turned 62 on March 16 and the family was at a birthday party for a grandson turning 5 when he got a text from a neighbor about the flood.

“He just went completely pale and he sat down,” Dani says. “He said, ‘Everything’s under water.’”

Their daughters are trying to help. They started a GoFundMe account with their parents’ grudging permission.

“At first they refused,” Dani says. “They are so private and so proud.”

And so grateful, the daughter said, for the kindness friends and strangers have shown in the days since the flood.

When Dani and Kendra were small, their parents had them memorize a password, a code that only people who loved them would know, in case someone tried to offer them a ride home from school or lure them away: Singleton strong.

It’s hard to be strong now.

“I know we’re not the only ones out there,” Deidre says. “And I’m just praying for everyone.”

It could be weeks before the water recedes and they can return to Paradise Lane, where Chris Lake homes were the hardest hit.

They called their insurance company, hoping some of their loss would be covered; the answer was no.

But they will go back.

They own the lot and that water-logged dream house.

The house that held so much of what they'd worked so long for.

Cindy Lange-Kubick: Postcards from Fremont, a view from the water-logged ground

She listened to the story from the small plane, looking down at three rivers that had merged to form a sea over the state she loves.

As water recedes, looking for — and finding — the helpers in Lincoln

In Lincoln, the most that most of us have had to sacrifice to the historic Nebraska flood of 2019 has been a flush or two of the toilet.

Cindy Lange-Kubick: Abbey Schnell, the Lincoln woman who inspired an army of cheerleaders

I called the number on the post-it note Thursday and now I have a date.

Cindy Lange-Kubick: 'How would you feel … if your father was killed in front of your eyes?'

The Yazidi friends sit on brown leather couches in the west Lincoln living room, where Khairi Hesso lives with his wife and three children.

Flooding caused at least 60 of the state's schools to close

At least 89 of Nebraska’s 244 public school districts have been impacted by flooding, and 60 of those had to close at least one school.

A medical provider said Tuesday this is no time for the state to skimp on paying for mental health services, with recent flooding expected to …

Acting as surrogate, grandmother gives birth to granddaughter in Omaha

A Gretna woman gave birth to a healthy baby girl early Monday morning after serving as a surrogate mother for her son and his husband.

Cindy Lange-Kubick: Down in Arkansas, missing home and those Huskers

At its most recent gathering, the expats in Arkansas doubled down on their agenda.

Last fall, before the start of the endless winter, Gabriella Parsons walked around Lincoln.

Cindy Lange-Kubick: Nebraska Mother of the Year, giving back through her grief

When the mail arrived and she saw the envelope — To the Parents of Spencer Konecky — the mother paused.

Cindy Lange-Kubick: Lincoln's Muslim community gives back because 'we have to stand together'

They helped because this is home.

Steve and Deidre Singleton with their grandchildren. The Lincoln couple retired to Chris Lake in Sarpy County in 2016. Their house is still underwater after a levee broke during this month's flood. The couple put everything into their dream home and did not have flood insurance. “It’s just been devastating to them,” said daughter Dani Davis.

Steve and Deidre Singleton's dream house (center) at Chris Lake in Sarpy County was among 300 on the lake that flooded.