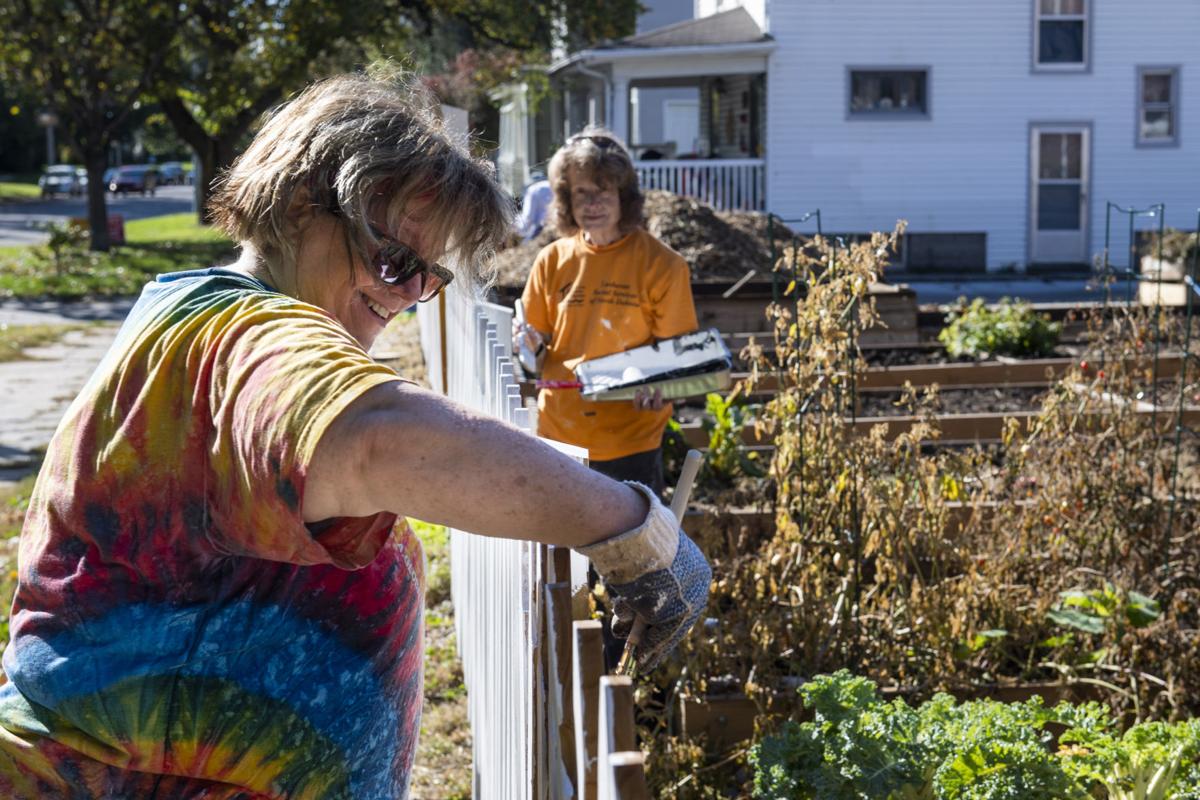 Nancy Field (left) and Jane Holtzclaw, both of Lincoln, paint fences at a community garden made a reality by members of First Presbyterian Church. 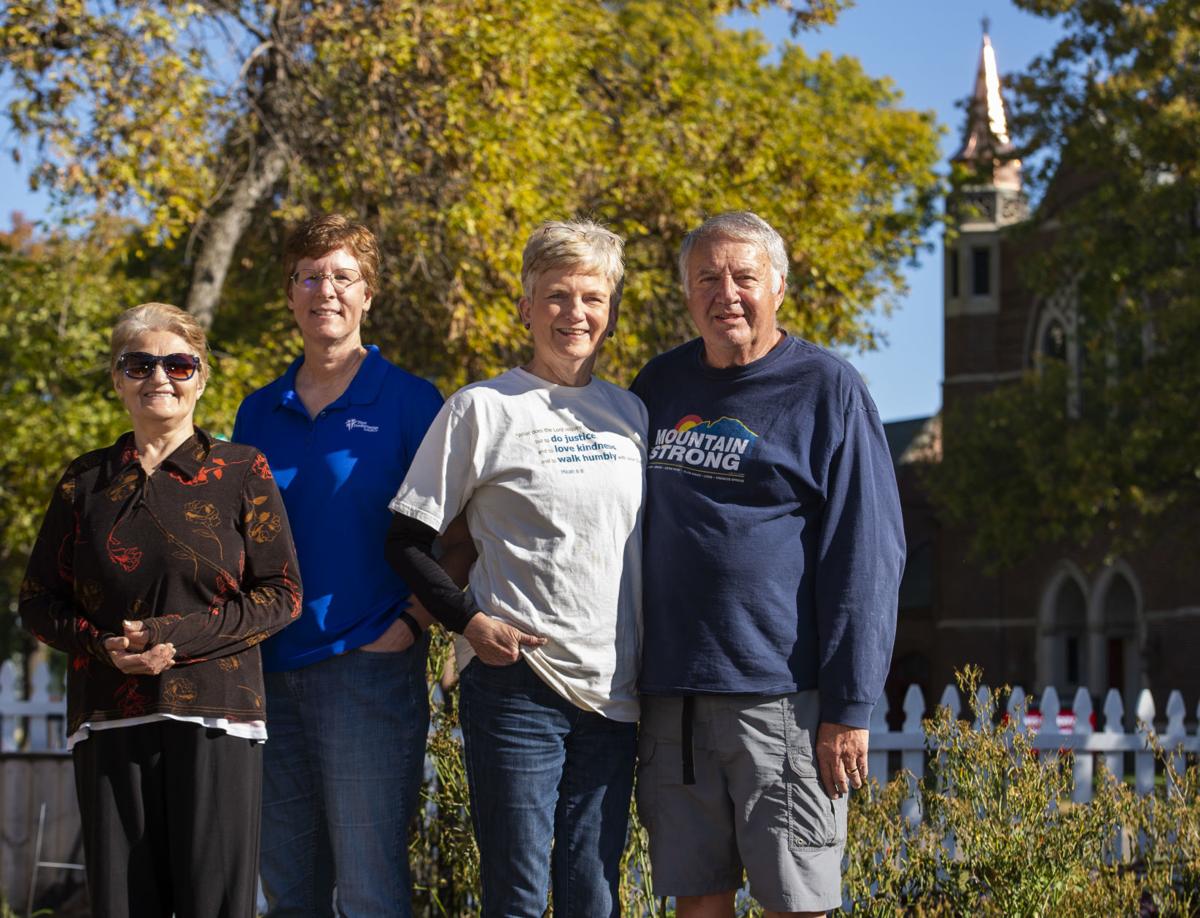 This is how a church serves its community.

It says here we are. Our roots are planted and this is where we plan to stay.

So it tears down those houses and plants a garden for people instead.

It’s a little more complicated, but that’s the short story of what First Presbyterian Church at 17th and F streets did this year.

On Sunday, there will be a party there with a potluck and a blessing by the church’s pastor, Sue Coller.

You can see the Capitol from the big, brick church on the corner with its gleaming bronze steeples. You can see apartment complexes and cars zipping toward downtown.

You can look across that busy street and see the 30 raised beds that fed gardeners from around the globe this summer. And the half-painted picket fence that surrounds the garden where those houses once stood.

I went to visit Friday, cherry tomatoes on dying vines, fall lettuce sprouting, the last hot peppers waiting to be plucked, garden hoses tucked away, a wheelbarrow leaning on the gate.

I walked past the two-story house next door with its big front porch and a sign in the yard: DRIVE LIKE YOUR KIDS LIVE HERE.

Think about that sign. Think about what would happen if we all did that. Drive Lincoln’s streets like our kids were playing in the front yards we pass. Care for every corner of our city like it was our own.

First Presbyterian has had a home here for 150 years, one of Lincoln’s oldest.

Pat Carrier was baptized in this church nearly 70 years ago. She lived in a red-brick apartment building down the street when she was small. And she’s like many of the church’s longtime members — gone from the neighborhood but still devoted to this place.

A decade ago, when other churches in the city core were contemplating moves to the edges, her church doubled down on its commitment to its diverse neighborhood in the shadow of downtown.

“I think being in the Near South, our church feels very strongly that we need to have a presence in the community and serve in any way we can,” Carrier said.

It opens its doors for a weekly food pantry and English classes held by Lincoln Literacy and Southeast Community College. There are A.A. meetings here and a Sudanese service on Sunday afternoons.

Outside groups stage musical events on its stage and the church partners with McPhee Elementary School a few blocks away, assisting with its Food Bank Backpack Program and other needs.

“We feel that the church is a part of the community,” Carrier said. “We hope they look to the church as a safe place.”

The garden grew out of a partnership with Community Crops and Jacob’s Well, a faith-based nonprofit that serves the neighborhood.

It started when the church had plans for a parking lot on the east side of its building and bought a dilapidated house there, but those plans fell through and in 2011, the raised bed gardens were installed instead.

Two years ago, they revisited the parking lot idea and decided to make it happen. But they didn’t want to abandon the garden that had taken root behind the church, along with the multi-ethnic group of vegetable growers that tended plots there.

“This church did something I think is really amazing,” Coller said. “They said, ‘We want to do both.’”

Coller has been pastor of the 270-member church for four years, so many of the plans pre-date her time here. But she was on hand for discussions about how to make both the concrete slab and the raised beds for planting work.

“There was a fair amount of debate,” she said. “It really ended up coming down to saying, ‘This is important.’”

The congregation started a capital campaign and kept its eye out for a suitable location for a new community garden.

When the two houses — one on 17th Street and one facing F Street — became available, the church bought them.

It paid to have them razed with the blessing of the Near South Neighborhood Association. It  spent money to prepare the ground for a garden. Volunteers with Jacob’s Well moved the raised beds to their new home across the street.

A home that has evolved over the decades, she said. From a primarily Caucasian, low-density pocket of the city to a highly-dense area, home to those of modest means and to many who have resettled here.

“We’ve been here as the neighborhood has changed,” Coller said. “Even though the people might speak different languages and have different skin color, this neighborhood is our home and always will be and we want to be in relationship with the people here.”

Esmat Shariati is one of the people helping transform the neighborhood.

The woman from Iran walks to the garden. She tends her plot where she grows the herbs and vegetables she needs for her Middle Eastern dishes, Carrier said of her friend.

“It’s a place for her to be outside that is safe and sunny and not closed in like her apartment is.”

Carrier hopes her friend will be at the potluck Sunday, along with her fellow gardeners and neighbors and members of the church. They will share a meal, tour the garden, imagine the new gazebo that will rise in the spring.

They will give thanks.

They want to send a message, Coller said.

“Here’s a space in this community that is here for all of us.”

What: Community potluck and dedication of First Presbyterian Church's garden, sponsored by the church, Community Crops and Jacob's Well.

They put up the plaque after Gina disappeared.

Cindy Lange-Kubick: 'After so many years of trauma and tragedy we could finally actually breathe'

The Lincoln mom had 20 minutes to share her family’s story.

Cindy Lange-Kubick: Walking to help the hungry for 45 years and counting

That first year, they took turns carrying the baby on their backs for 10 miles.

Cindy Lange-Kubick: The enduring friendship of Forrest and Jay

They sit for a portrait, a pair of retired ministers on a paisley couch.

On the evening of her art show opening in early October, the artist answered questions about her work.

The storms rolled in one after the other that summer.

Cindy Lange-Kubick: Debating daylight saving time while we fall back into the dark

Give me back my daylight.

Kelly Ross started a program designed to give immigrant and refugee women the opportunity to achieve economic independence and social capital.

Nancy Field (left) and Jane Holtzclaw, both of Lincoln, paint fences at a community garden made a reality by members of First Presbyterian Church.