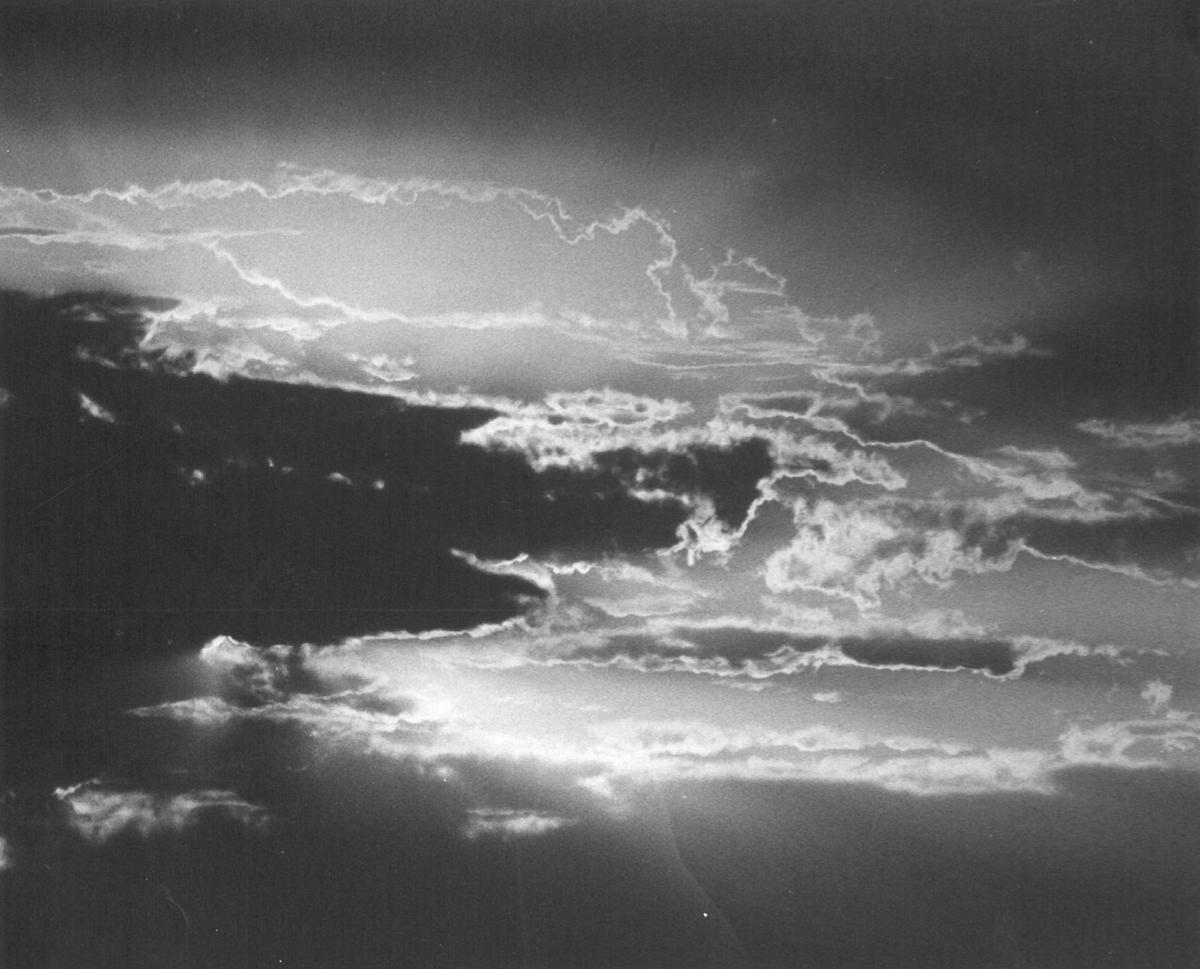 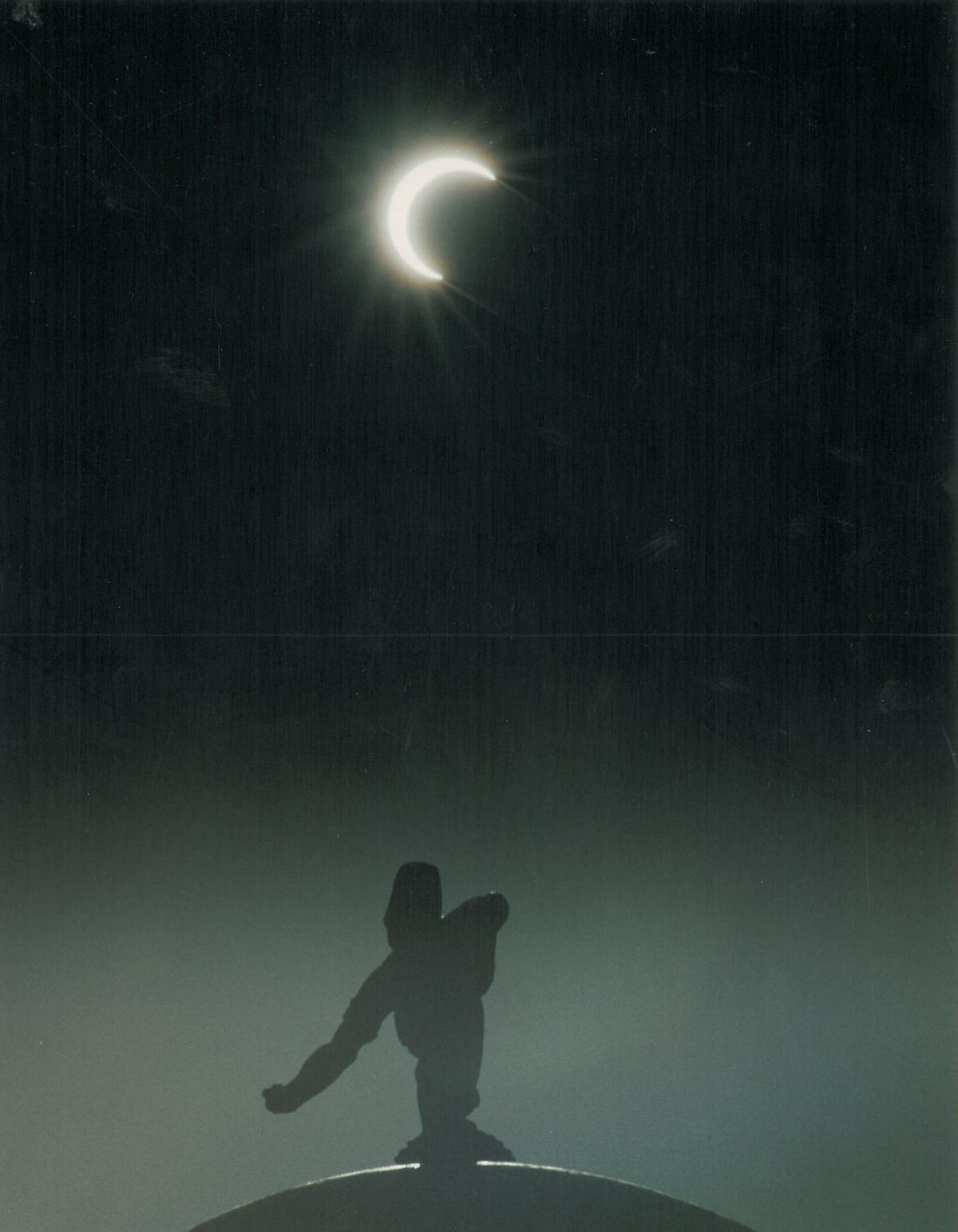 An annular solar eclipse darkens the sky over the Capitol Sower on May 10, 1994.

For one day, Lincoln could be the largest city in Nebraska that matters.

Nowhere else in the state should offer so many of its own residents prime views of the Aug. 21 total solar eclipse as its shadow sweeps from coast to coast. Weather permitting, nearly all of Lincoln's 280,000 residents can experience the celestial event from their own backyards.

"This is a once-in-a-lifetime opportunity," said Jeff Maul, executive director of the Lincoln Convention and Visitors Bureau. "I think Lincoln people need to be aware that we're going to have people from all over the world here ... and it's going to be gone before you know it."

Lincoln's last major eclipse — on May 10, 1994 — was an annular eclipse, in which the moon is too far away to completely block the sun. No total eclipse has ever cut through the Capital City during its recorded history.

While nearly all of Lincoln is within the Aug. 21 eclipse path, far southwest Lincoln is closest to the center line and will experience the longest totality: 1 minute, 51 seconds.

Expect county roads between Lincoln and Beatrice to turn into impromptu viewing sites long before the partial eclipse begins at 11:37 a.m., followed by the total eclipse at 1:02 p.m.

People looking for structured eclipse events have options in the Capital City.

Gates at Haymarket Park will open at 11 a.m. for a total solar eclipse game between the Lincoln Saltdogs and Gary SouthShore Railcats. Tickets start at $6.

"We'll have a solar eclipse delay in the baseball game, which is somewhat unique," Maul said.

Just outside Haymarket Park and accessible to the general public, the University of Nebraska-Lincoln will host a science and engineering expo with exhibits tied to the solar eclipse.

For free eclipse viewing, people can set up blankets at any city park or Audobon Spring Creek Prairie near Denton.

And for those willing to drive a bit farther, here's a look at some events and viewing sites planned across the state:

This is ground zero for Nebraska's eclipse festivities. Beatrice and other communities in Gage County expect as many as 60,000 visitors combined, including Omahans hoping to glimpse the total eclipse and Lincoln residents seeking an extra minute of totality.

In addition to a full slate of events over the eclipse weekend, Homestead National Monument will have two stages set up for the eclipse itself. NASA will be there, and so will Bill Nye "The Science Guy."

"The closer it gets, I'm getting more excited about it all the time," says Lisa Wiegand, Gage County tourism director.

America's Fourth of July city will ditch the fireworks to celebrate a darkened sky for a change. At least seven sites in town will host eclipse viewing opportunities and events, including the Nebraska National Guard Museum and Concordia University.

Just north of the eclipse center line, Wilber is partnering with nearby Crete to offer a weekend of events and viewing sites the day of the eclipse. The party starts in Crete on Saturday and continues in Wilber on Sunday, and both towns have viewing sites and events Monday.

Folks here are hoping for a quieter look at the sky. Falls City plans to close off two blocks of its cobblestone main street for a "Dine in the Dark" luncheon catered by two local restaurants.

Aurora's resident "mad scientist," Dan Glomski of the Edgerton Explorit Center, will guide viewers at the Leadership Center in northeast Aurora during the eclipse. Parking is available at two other viewing sites, Streeter Park and the Hamilton County Fairgrounds.

Another option for those who want to leave town but avoid a long drive, Grand Island's main eclipse event won't require a lot of advance planning: Viewing spots are available on a first-come, first-served basis.

Stuhr Museum of the Prairie Pioneer, on the south edge of Grand Island, offers 200 acres of land for free parking and viewing, with food trucks and events, including a NASA balloon launch, speakers and a performance by Nebraska musician Paul Siebert.

Sharing the spotlight with its northern neighbor Ravenna, Kearney has many of its own events planned, especially leading up to the eclipse itself, including a trail run and cage fights on Saturday, and live music Sunday at The Archway and the Museum of Nebraska Art.

The day of the eclipse, for those not going to Ravenna, the University of Nebraska at Kearney will host a watch party at Foster Field, and Fort Kearny State Recreation Area will couple viewing with a science encounter. Public viewing will also be available at the Buffalo County Fairgrounds and the Viaero Center parking lot south of Interstate 80.

One of the viewing sites chosen by die-hard sun-gazers, expect a flood of people on the road to Ravenna from Kearney come eclipse day to enjoy an extra 38 seconds of totality.

But the city isn't leaving all pre-eclipse festivities to its larger neighbor to the south. Cedar Hills Vineyard & Garden is hosting a Friday night "star party," followed by Ravenna's first-ever music festival on Saturday. Sunday events include a golf tournament, trapshoot and a road cruise.

Like Kearney, North Platte will serve as a launching point for neighboring communities closer to the eclipse's center line, while still hosting its own viewing events.

Charter buses will make round trips to nearby Stapleton and Tryon throughout the weekend, starting as early as 7 a.m. the day of the eclipse, said Lisa Burke, director of the North Platte Visitors Bureau.

In North Platte, Pal's Brewing Co. will tap a special "Midnight in the Daylight Stout" before the eclipse, Feather River Vineyards is hosting a $12 lunch buffet, and Buffalo Bill Ranch State Historical Park will hold a daylong scavenger hunt.

Deep in Sandhills ranching country, these two towns — with a combined population of about 500 — expect thousands of visitors to soak in unobstructed views of the eclipse in conjunction with events in North Platte. Local officials expect visitors from Spain, Germany, the Netherlands and Denmark, among others.

"It's going to be a short boost to the economy around here," says eclipse event coordinator Gary Johnsen.

It's all about Carhenge. One of Nebraska's quirkiest landmarks is expected to draw a significant crowd for the eclipse. Even the governor will be here. But how many people can Carhenge accommodate? "Good question," says manager Kevin Howard. "We could have 15,000."

Other viewing sites include Laing Lake Park and the Airport Rodeo Grounds, and the Alliance Municipal Airport is hosting a fly-in, reservation-only viewing site.

OK, Omaha. We couldn't leave you out — but even a participation trophy would exaggerate your role in this.

You will not experience totality, just a partial eclipse. However, the rest of us appreciate your big airport and your wide assortment of hotels, restaurants and activities to accommodate our thousands of guests.

PhotoFiles: Spotting the eclipse in Lincoln

Look at eclipses of the past in Lincoln through these archive photos.

Countdown to Totality: Your updating guide to the Aug. 21 total solar eclipse

While most people will be on the ground looking up Aug. 21 at the first total solar eclipse to cross the U.S. in nearly a century, Austin Aren…

If the first day of fall classes at the University of Nebraska-Lincoln weren't hectic enough for the 25,000-plus students on campus, the first…

HUBBARD — As the temperature climbed on a humid summer morning, a few anglers and kayakers had a nearly new lake all to themselves.

Nebraska is three weeks from what could be its biggest-ever tourism event.

A local bicycling group is inviting riders of all levels to participate in a two-wheeled trek south of Lincoln for the Aug. 21 total solar eclipse.

Experts says photographing the Aug. 21 solar eclipse is possible, even with a smart phone, if precautions are followed.

Draw a line with a felt-tip marker from Portland, Oregon, to Atlanta, Bill Nye the Science Guy said, and you’ve basically recreated the path u…

It's the ultimate minor-league baseball promotion.

An annular solar eclipse darkens the sky over the Capitol Sower on May 10, 1994.