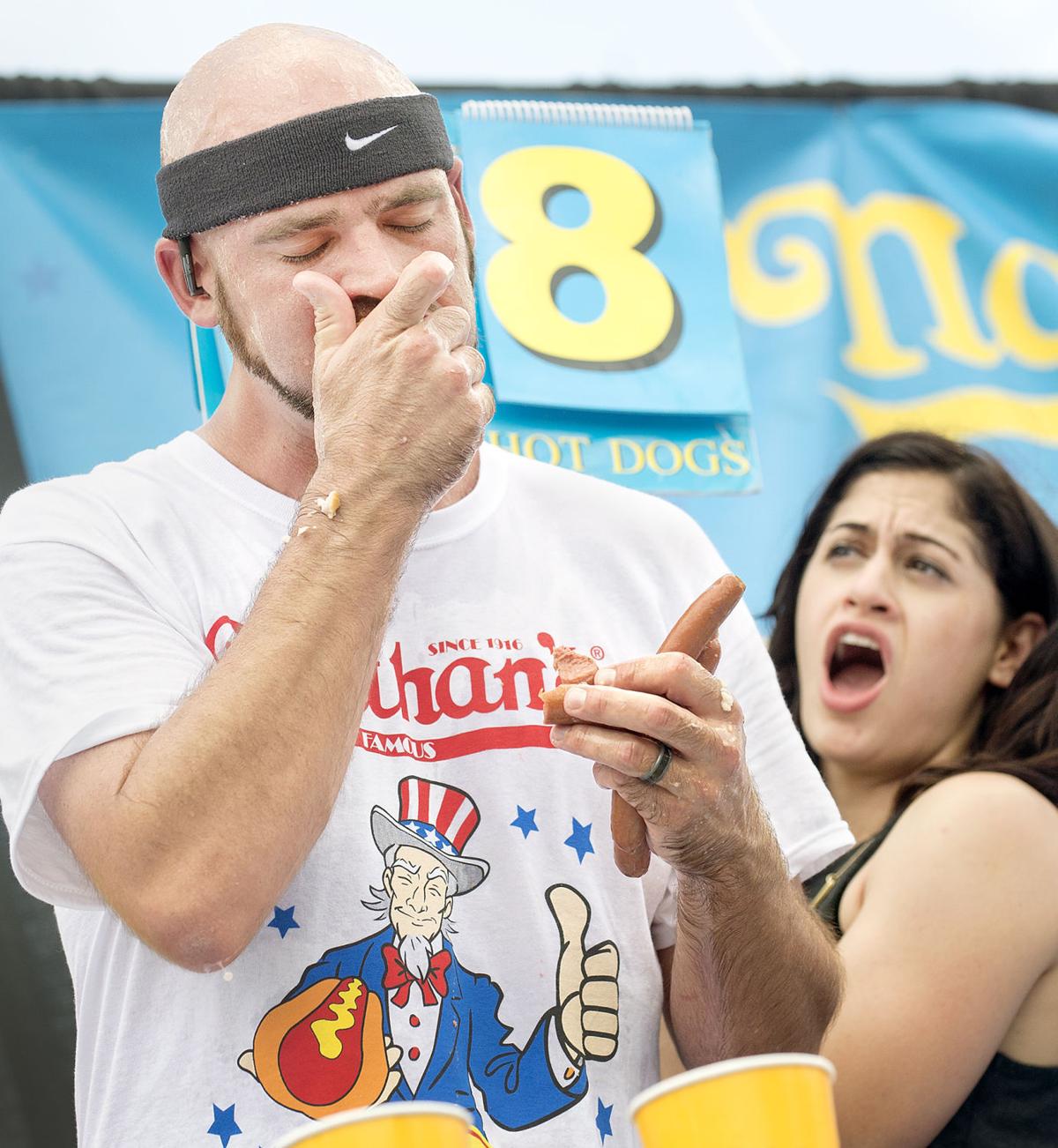 Steve Hendry of Dixon, California, goes for the two-handed approach to competitive hot dog eating Saturday, handling buns with one hand and hot dogs with the other. Official counter Natalie Micale keeps track of his progress at the inaugural Nebraska Hot Dog Eating Championship at The Shoppes at Piedmont. 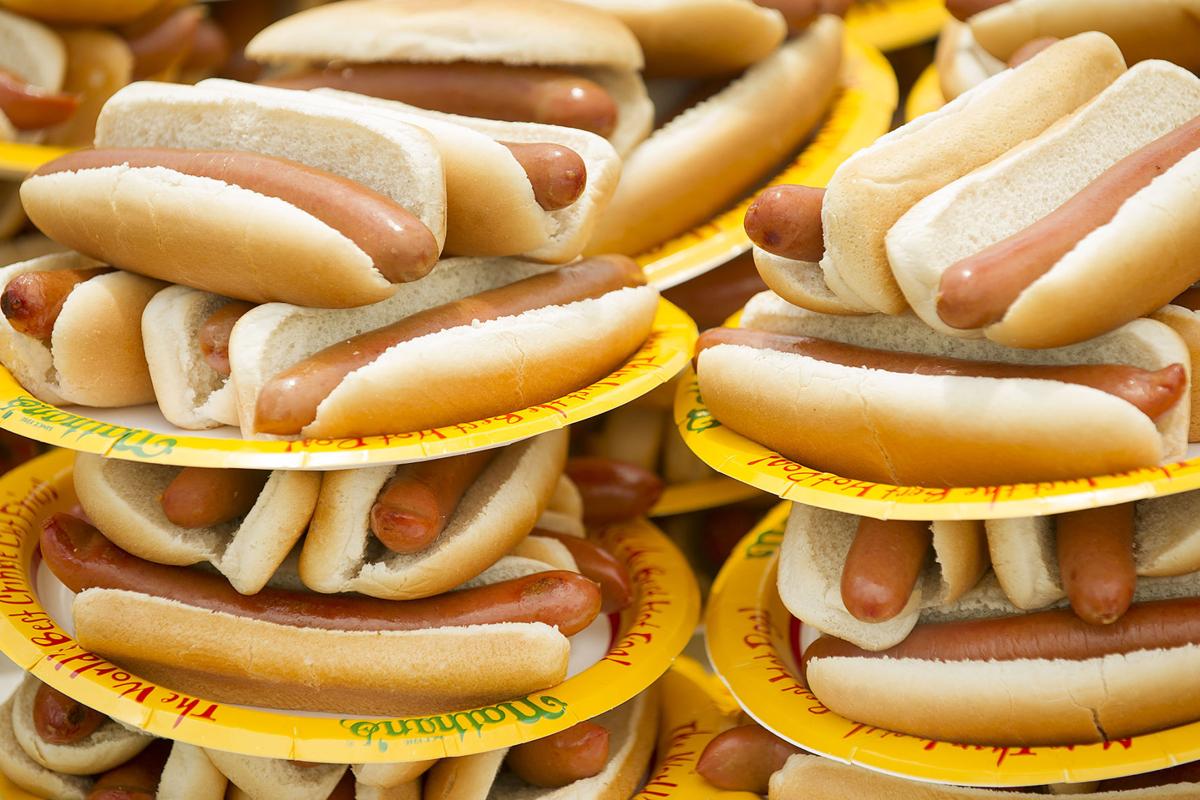 Hot dogs are served up plain and by the dozen for competitors at Lincoln's first Nebraska Hot Dog Eating Championship Saturday.

After nearly three years, Steve Hendry has reached the pinnacle of competitive eating.

Hendry, a competitive eater from California, is ranked 14th in the world. He has attempted to qualify five times for the Nathan’s Famous Fourth of July International Hot Dog Eating Contest on Coney Island in New York.

He’s tried and failed each time, coming as close as tying for first place at his last qualifier, but losing in an overtime round. But on Saturday afternoon in 92-degree weather at The Shoppes at Piedmont in Lincoln, in front of a couple of hundred spectators, Hendry finally won his first qualifier.

Facing off against 11 other competitors -- four from Lincoln -- Hendry scarfed down 21 hot dogs in 10 minutes, which was good enough to put him on the main stage at Coney Island next month.

And he won’t be going alone. His wife, Angela, also qualified.

In her first foray into competitive eating, Angela took on only one other female competitor, Claire Borer of Lincoln, in Saturday's qualifier. Angela consumed four hot dogs in the 10-minute time limit.

“He (Steve) said my nerves would go away,” Angela said just after the competition, “but I’m still shaking!”

Steve said he trained for the qualifier for two months. It was within the past month he also began coaching his wife, who said she competed so she could finally relate to the mass consumption of food Steve goes through about 10 times a year.

Like many of the professional competitors, Steve has a strategy when he goes up to the stage. Mixing Crystal Light drink powders with hot water, Steve breaks the hot dog buns into two pieces and dips them into the hot water for easier eating. And unlike the rest of his competitors on Saturday who only consumed one hot dog at a time, Steve devoured two hot dogs simultaneously.

By his 10th hot dog, Steve’s face noticeably contorted as his stomach began to feel the strain. By the 15th hot dog, his upper body was shifting and wiggling. It looked as if Steve was physically trying to make more room inside his stomach.

But as the 10 minutes came to a close, Steve was clearly the winner of the male category. Mark Williams of Marshalltown, Iowa, was the only other to get close to Steve’s count, having eaten 15 hot dogs.

And although Steve was happy with his victory and his wife’s, he said he wasn’t satisfied with his count of 21 hot dogs. In practice before the Saturday challenge, Steve said he managed to eat 15 hot dogs in less than three minutes.

But Steve, a service technician for The Trenchless Co., has a lot of work cut out for him to beat eight-year reigning champion Joey Chestnut of San Jose, California. Chestnut holds the world record for eating 69 hot dogs and buns in 10 minutes.

Steve said he hopes to at least eat 25 at the finals.

Steve Glenn, owner of The Shoppes at Piedmont, said in a news release that the regional qualifier was a major event for the community. Hot dogs and drinks sold to spectators during the event raised money for the People’s City Mission in Lincoln.

It's not quite Christmas in July, but close enough.

On the Beat: Lincoln's become a frenzy of festival activity

Check out some of the food trucks and mobile dining options around Lincoln. If you know of updates to this list, send us a Facebook message or…

Josh Hoyer and The Shadow Boxers headlined a full evening of live music May 30 at the sixth annual Lincoln BBQ & Blues Fest, presented by …

What you need to know about Uncle Sam Jam

Here's what you need to know about Uncle Sam Jam, including parking tips, food locations and a schedule of events.

Steve Hendry of Dixon, California, goes for the two-handed approach to competitive hot dog eating Saturday, handling buns with one hand and hot dogs with the other. Official counter Natalie Micale keeps track of his progress at the inaugural Nebraska Hot Dog Eating Championship at The Shoppes at Piedmont.

Hot dogs are served up plain and by the dozen for competitors at Lincoln's first Nebraska Hot Dog Eating Championship Saturday.