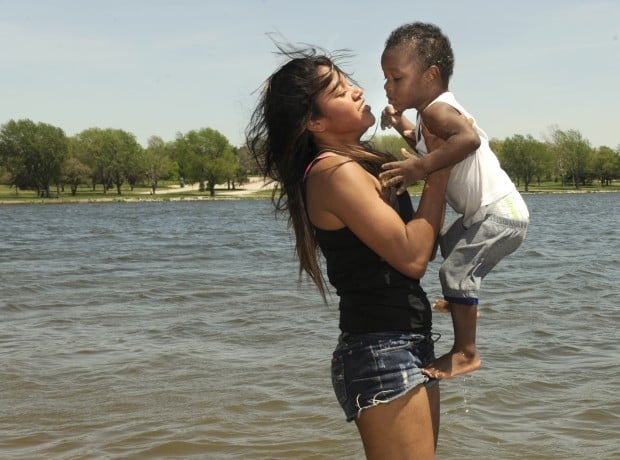 Kris DellaCroce lifts her 3-year-old son, Tae, as they dipped their toes in Holmes Lake on Tuesday, May 14, 2013. 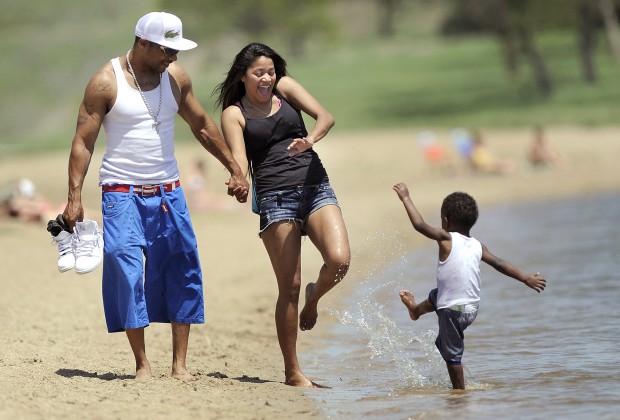 Kris DellaCroce (center) walks along the beach at Holmes Lake with her boyfriend, P.J. Brown, and 3-year-old son, Tae, on Tuesday, May 14, 2013.

Childhood memories, the likes of those belonging to Kris DellaCroce, hold on for a lifetime.

The memory of walking up the stairs to the porch of her home when she was 4, her little sister clinging to her mom, her mom saying Kris and her sisters had to go with the lady who had come for them.

Watching out the back window of the car as they drove away, watching her crying mother disappear.

The memory of bouncing from one foster home to another as both of her sisters were adopted.

By the time Kris hit age 19, she had lived in more than 20 foster homes.

"Every time I would get close to being adopted, I'd have a freak-out because I didn't want my mom to think I abandoned her," she said.

In the fall of her senior year, Kris became pregnant. And the day she graduated from high school, her foster parents told her it was time to go. They had fulfilled their responsibility to get her through her pregnancy and graduation.

Kris moved in with her older sister's adopted mom for a year, but at 19, when the state closed her case, she was told again she had to leave.

"That was it. I had my own place, no job, a new baby and I was going to school," she said.

The date is seared into her memory. March 15, 2011. In one afternoon, she went from being in a family to being on her own. No furniture except for a crib. She slept on the floor.

Kris, who is 21, does not want her son to have the same memories of growing up.

And she does not want other foster kids to have the same experience when they age out of the system -- short notice that they will be on their own, very little preparation.

If they do decide to go it alone for a while, she wants them to have a back-up plan if it isn't working.

A bill (LB216) introduced by Sen. Amanda McGill of Lincoln, which is waiting for a second round of debate, is aimed at improving the lives of young people who are making the often difficult transition from foster care to independent adulthood.

With the bill, those young people could volunteer to receive the medical care, housing and living assistance it would provide.

About 300 youths age out of Nebraska's foster care system each year.

A national campaign, "Success Beyond 18," was launched recently by the Jim Casey Youth Opportunities Initiative. A group of Nebraska agencies that serve youths played a role in that launch.

Gary Stangler, executive director of the initiative, said in an interview with the Nebraska Children and Families Foundation that for most of the 12 years he was with the Missouri Department of Social Services, he didn't pay much attention to the issue of youth aging out of foster care.

Because of that, Stangler said, it wasn't shocking that they had a hard time finishing school, finding a place to live, landing full-time jobs and supporting themselves.

Statistically, a majority of the young women had babies by age 21 and the majority of young men were convicted of crimes.

Extending support to age 21 would give them better access to family structures, housing, education, transportation, jobs and health care, he said.

Kris said her first year was rough. And when her one-year lease was up, the couch surfing began. In the past 18 months, she has moved from place to place seven or eight times.

"It's not easy, especially when you have a baby," Kris said.

She wants her son to have more than she's had, and she truly wants him to never experience the child welfare system.

She is happy to have a waitress job now.

"Right now, I think I'm doing all right. I mean, after everything," she said. "I have support. I have friends and family, and my baby."

Her friend's mom provides child care for her son.

About a year ago, she reconnected with Project Everlast, a statewide youth-led initiative that provides resources, connections and support to young adults as they age out of foster care. She works with one of the nine Project Everlast statewide councils, facilitating meetings in Lincoln, recruiting youths and communicating with other youths.

She was among the group's members from Lincoln and Omaha who collected data for LB216 and told their stories last month to senators.

The young woman has dreams. One of them is to return to school and get a degree in social work or human services, so she can help others. That would take scholarships and financial aid.

Reach JoAnne Young at 402-473-7228 or jyoung@journalstar.com -- You can follow JoAnne's tweets at twitter.com/ljslegislature.

About 10 percent of babies born each year are affected by prenatal alcohol or illicit drug exposure. At Saint Elizabeth Medical Center in Lincoln, one social worker says he sees six to 10 cases each month of women about to give birth who are suspected of abusing drugs or alcohol.

A bill that would extend help and benefits to former state wards advanced Friday from first-round debate on a 28-1 vote.

The speakers who stepped up to the microphone in the glass-lined meeting room had prestigious titles: mayor, superintendent, U.S. senator.

A proposal to improve payments to Nebraska foster parents was modified before moving Friday to final reading.

Kris DellaCroce lifts her 3-year-old son, Tae, as they dipped their toes in Holmes Lake on Tuesday, May 14, 2013.

Kris DellaCroce (center) walks along the beach at Holmes Lake with her boyfriend, P.J. Brown, and 3-year-old son, Tae, on Tuesday, May 14, 2013.