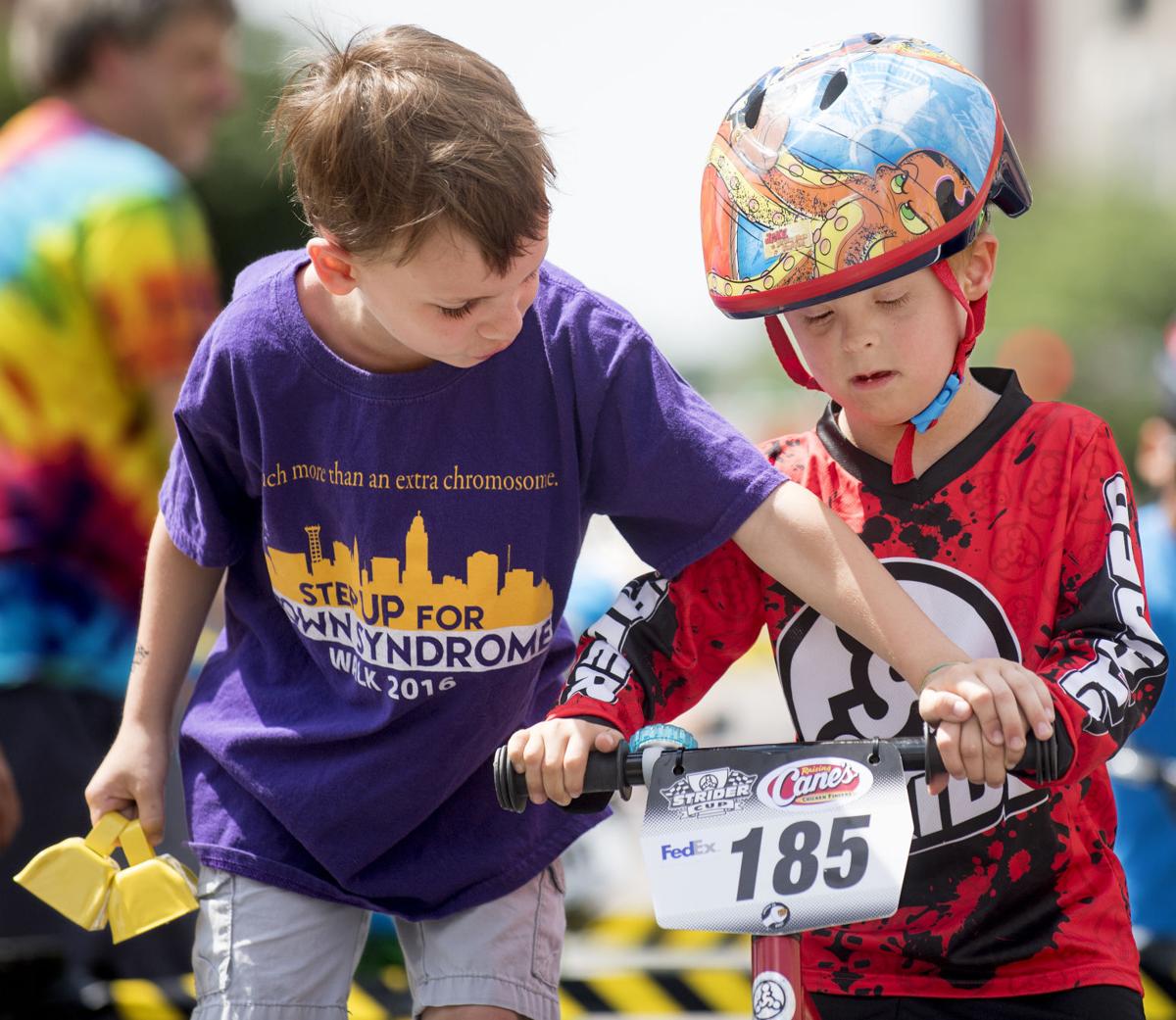 Eight-year-old Simon Brockmeier (left) gets his little brother, Andy, ready for the competition during the Strider Cup Race on Saturday, June 10, 2017, at Tower Square. 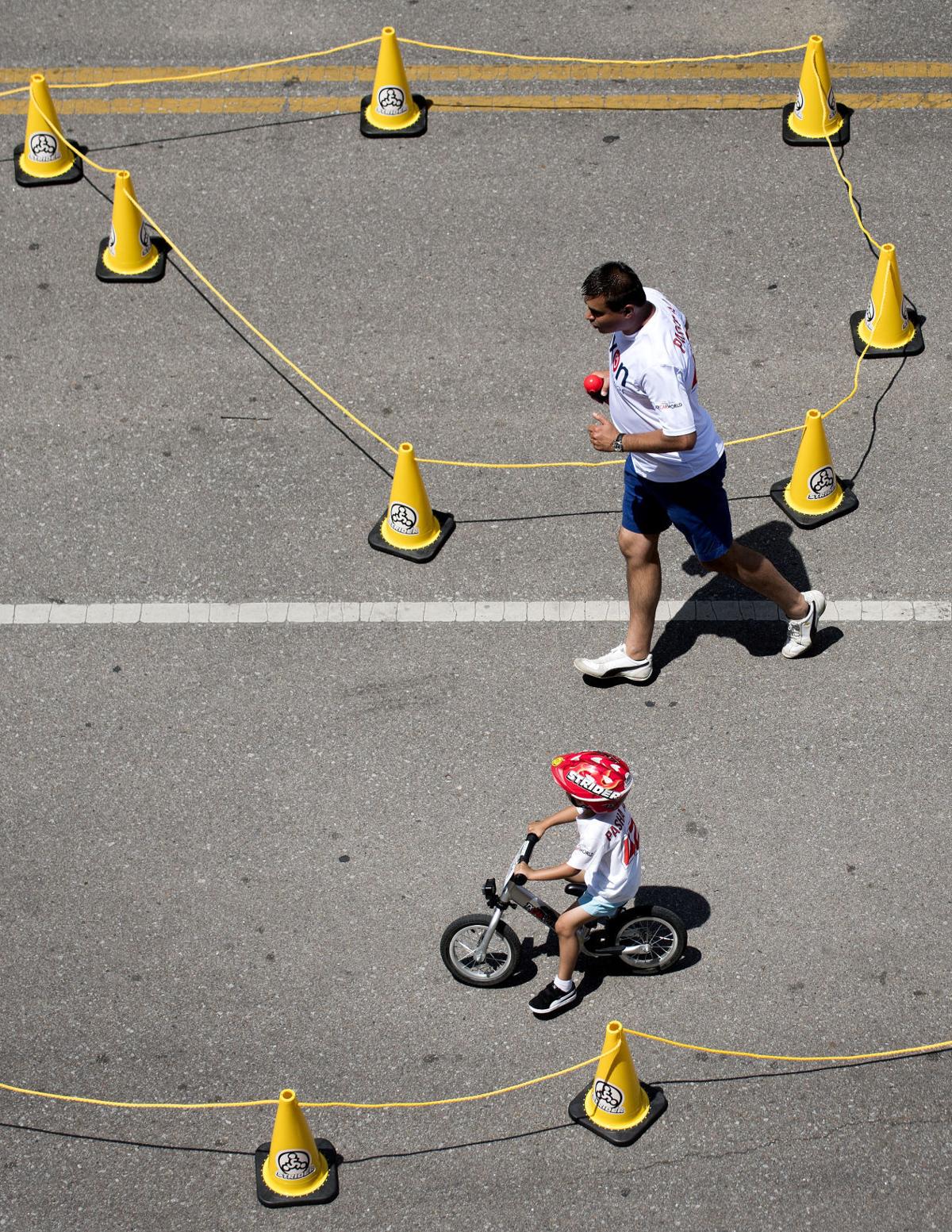 Three-year-old Pasha Ali (bottom) of Dallas, Texas takes a practice ride along with father, Nur Ali, prior to the Strider Cup Race on Saturday, June 10, 2017, at Tower Square.

Six-year-old Andy Brockmeier gripped the handles on his red, pedal-less bike and propelled himself down the starting ramp Saturday afternoon.

His older brother, Simon, 8, ran alongside him, ringing two yellow bells and signaling a thumbs-up.

"You can do it, Andy!" he cheered from the top of his lungs.

They crossed the finish line of the Strider Cup Race, and after shouts of congratulations, the brothers bounced up and down in triumphant victory.

"He makes me very proud," Simon said about Andy, who was born with Down syndrome, a genetic disorder that can cause developmental delays.

The Strider Cup Race is held around the U.S. and in 24 other countries. Children up to age 5 compete in age-specific races and are awarded trophies after the races.

Andy's parents, Kathryn and Greg Brockmeier, said the race encourages community support and gives Andy the opportunity to do "something that typical kids do."

Andy plans to compete each year and hand his bike down to his 2-year-old brother, Benjamin, when he outgrows it.

The special needs race was added the the event three years ago after Strider began selling larger-sized balance bikes. The pedal-less bikes work well for children with special needs because they are lighter in weight and help with learning balance.

Additionally, the pedal-less bikes don't have training wheels, which makes older children feel as if they're riding a regular bike.

"For the families with children who have special needs, it's life-changing," Wright said. "A lot of them have been told their child may never ride a bike."

Andy was one of nine participants who raced in the special needs race this year. He's taken Special Olympics training courses at Easterday Recreation Center.

Coach Shelley Klosterboer showed up Saturday to cheer on her students — she knew almost all of them from Special Olympics courses.

She said she's proud to see the kids "feel confident and comfortable with themselves."

For the second year in a row, Andy won a first-place trophy, nearly half as tall as he is.

Andy's parents said he proudly displays the prize in his bedroom, a constant reminder of his success and a fun day surrounded by friends. When guests visit, he makes sure to point it out or drags it from his room to show them.

"I think he's proud of himself," his mother said. "He'll be talking about this for weeks."

Take a look at photos from the scene of this year's Strider Cup competition.

The Raising Cane’s Chicken Fingers franchise in Lincoln is teaming up with Strider Bikes, the world’s leading manufacturer and marketer of chi…

Special Olympic athletes in Lincoln are now training for the City’s first Strider Cup Race from 9 a.m. to 2:30 p.m. Saturday, June 11 in the R…

Toddler racing coming to The Railyard

Strider Cup Racing for kids ages 2-5 is coming to Lincoln, June 11, in The Railyard. There will also be opportunities for special-needs kids a…

Freezing temperatures and slick roads didn’t stop some dinosaurs from taking a dip into Holmes Lake on Saturday morning.

Eight-year-old Simon Brockmeier (left) gets his little brother, Andy, ready for the competition during the Strider Cup Race on Saturday, June 10, 2017, at Tower Square.

Three-year-old Pasha Ali (bottom) of Dallas, Texas takes a practice ride along with father, Nur Ali, prior to the Strider Cup Race on Saturday, June 10, 2017, at Tower Square.