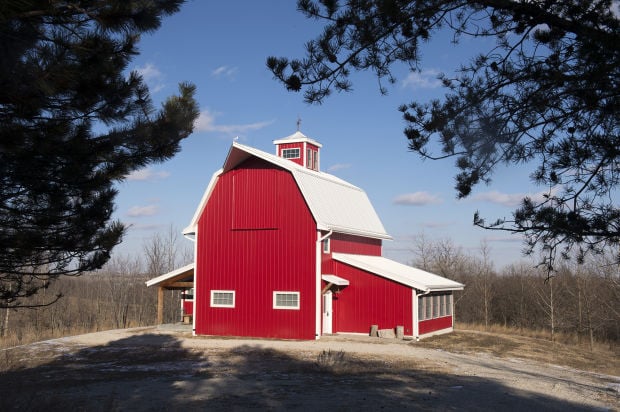 This barn was built as an energy-efficient home outside of Lincoln. 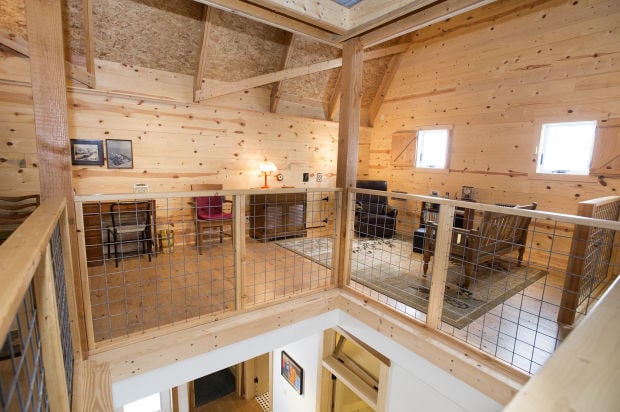 The stack effect, created by leaving an open air space through the middle of the home from basement to cupola, keeps the air cool in summer in an energy-efficient home just outside Lincoln.

From the outside, the red and white barn looks new and beautiful, but there are no stalls on the main floor, no chickens roosting in the loft.

This barn was built for people, specifically two brothers from Lincoln who wish to remain anonymous but who want to share the story of how they built an energy-efficient home in a place without access to good drinking water.

The brothers bought the 75 acres northwest of Lincoln about five years ago and found out they could not connect to Lincoln's water system because the land was close to but outside of the city limits. They drilled six test holes for a well but the groundwater was too salty.

So, they turned to the only other option available: the sky.

Architect Michelle Penn and home developer Mike Rezac, both of Lincoln, helped the brothers design and build a system to harvest rainwater and store it in the basement until it is needed, even during dry spells.

Penn owns Authenticity LLC and said the brothers are very private people and she agreed to respect that privacy every step of the  way.

The project, she said, was one of the most fascinating and challenging she has ever done.

"This is not new technology, but it is new to Lincoln," said Rezac, owner of Rezac Construction Inc. and a leader in building homes with renewable energy features.

Rain falls on the metal roof, flows into a sealed gutter system and through a centrifugal-force filter before it's piped into nine 400-gallon plastic tanks in the basement.

Another filtration system removes dust and other impurities, including the odor of stagnant water, to make the rainwater drinkable.

A water softener is not needed because rainwater has few minerals, Penn said. The brothers estimate they harvest about 1,000 gallons of water from an inch of rain.

The basement also holds a greywater system, which uses water from bathroom sinks and showers to flush toilets. (Water from kitchen sinks and dishwashers is not used because it might contain food particles.) Sewage is funneled to a septic tank, and a 500-gallon plastic tank in the basement stores water for the home's fire suppression system.

But the plastic tanks do more than store rainwater. They act as a "thermal mass" to help cool -- and sometimes heat -- the 2,400-square-foot house, which has no air conditioning.

Penn designed a passive airflow system that works like a fireplace chimney. Air flows from the basement to the barn's cupola through large metal grates in the center of the house. Vents, old-fashioned transoms and fans help distribute air into rooms.

In the summer, grates built into the floors are kept open to allow air from the basement -- cooled with the help of the water tanks -- to flow upward, Penn said. In the winter, a big rug is placed over the grate on the main floor to close off the basement if needed.

"We're controlling what the air does in this home," Rezac said.

Six large windows and eaves on the south side of the house serve as a passive solar energy collection system to heat a kitchen and sitting area in the winter. Radiant heat from pipes built into the concrete floor on the main level also help heat other parts of the house, along with a heat pump and stored thermal energy from the water tanks.

The brothers decided to build their house to look like a traditional barn because they wanted to honor their grandfather, who built a similar-style barn near Waverly during the 1920s. A barnlike structure also fit the hilly and wooded landscape.

The cost of construction is comparable to a high-performance, conventional home, Rezac said, about $200 per square foot. Special features like the rainwater harvesting system, which costs about $45,000, add more to the price.

But the owners will realize savings because they will have no water bills, no air conditioning system to drive up electricity costs, little duct work and no furnace, Penn said. The brothers pay $80 to $100 per month for electricity.

While the house looks like a barn from the outside, the interior is straight out of a country-living magazine. Pine was used to cover floors and walls, and goat-fence panels line the staircase railings.

Rezac said the biggest hurdle he faced was "taking the barn aspect and turning it into a residence" and using a minimum number of beams to support the structure.

"We got what we wanted. It's a barn but a very comfortable place to live," he said.

The brothers agree. The home, which was started in 2012 and finished in about one year, is the perfect place for family gatherings or visiting relatives and friends. It's even got a small art gallery on the main floor.

Nonprofit to look at supplying thermal energy to penitentiary

The District Energy Corp. is looking into providing thermal energy to the Nebraska State Penitentiary, the Nebraska Department of Roads headqu…

This adorable red panda at a U.K. zoo is a 'miracle'

This adorable red panda at a U.K. zoo is a 'miracle'

This barn was built as an energy-efficient home outside of Lincoln.

The stack effect, created by leaving an open air space through the middle of the home from basement to cupola, keeps the air cool in summer in an energy-efficient home just outside Lincoln.