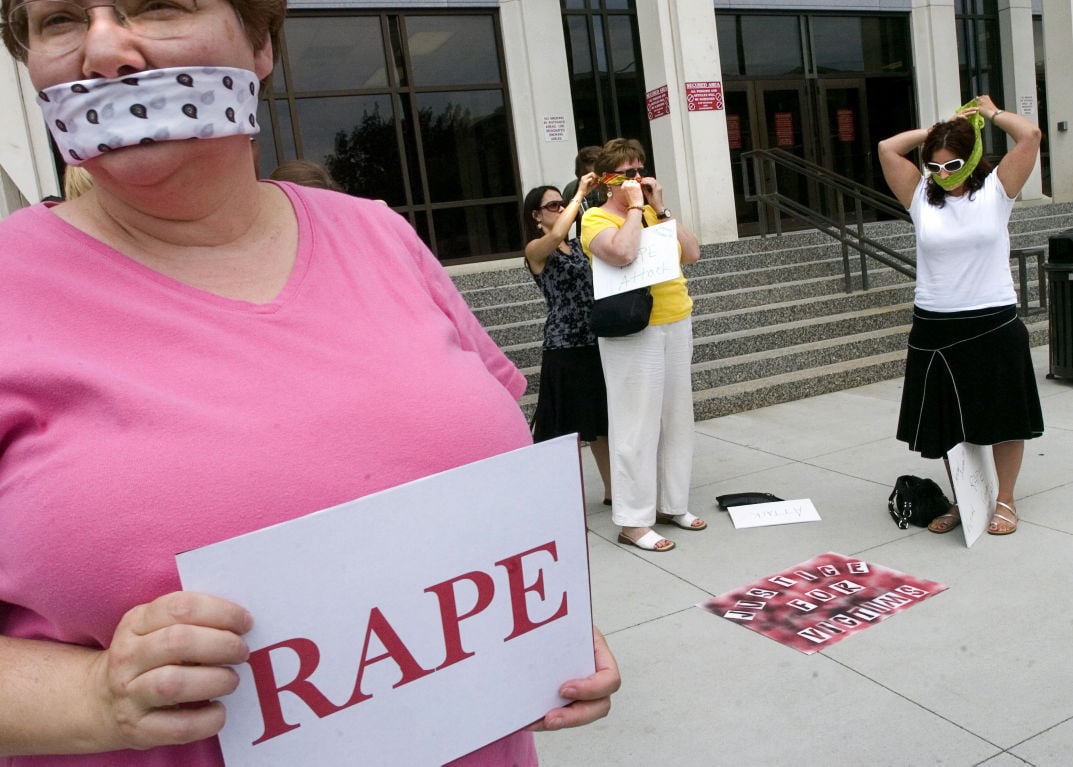 Bambi Carnicle (left) protests outside the district courthouse in Lincoln in 2007 after Judge Jeffre Cheuvront ordered Tory Bowen not say she was raped during a 2006 sexual assault trial and a retrial the following year. 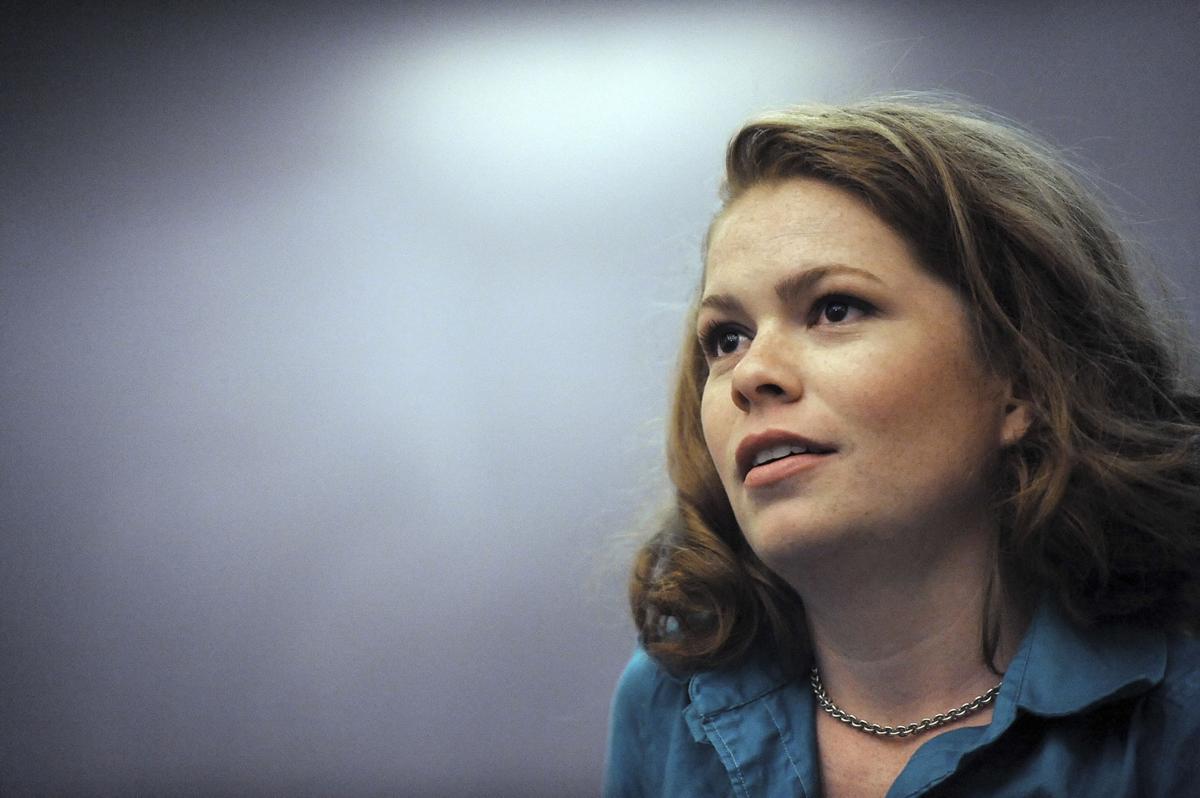 A videotape showed them kissing at the bar. They left together at 1 a.m.

The 21-year-old had a number of drinks and says she doesn't remember anything after a certain point, until she woke up in the morning with no clothes on, vomit in her hair and a man she didn't know on top of her.

She told him to get off of her, and he did, she said. Later, she said she had no idea how she got to Safi's apartment.

"I felt sick, violated, angry and every other emotion in between," Bowen said in "Lived Through This," a collection of stories of sexual violence survivors written by Anne Ream.

She contacted police; Safi, then 31, was arrested 20 days later.

He did not respond to a request for an interview for this story, but maintained throughout the trial the two had consensual sex.

The case took an out-of-the-ordinary turn when Safi's attorney, Clarence Mock, made a motion to prohibit Bowen and the prosecution's witnesses from using words including "rape," "sexual assault kit," "victim," "assailant."

The idea was to preserve Safi's presumption of innocence and the fairness of the trial, balancing the accused's rights with the accuser's, especially in a case in which the main questions were about credibility of the witnesses.

Cheuvront accepted Mock's motion. The trial proceeded, and then ended in a hung jury, split 7-5, and a mistrial.

Another trial started in July 2007, with the same instructions for Bowen and witnesses.

Bowen called in attorney and sexual assault expert Wendy Murphy, and the trial and the judge's order called national attention to the case.

To Bowen, Cheuvront's ruling meant she would have to lie on the witness stand because to say Safi had "sex" with her implied consent, she said.

Her father, Dennis Bowen, said at a rally on the Capitol steps at the time that to have his daughter silenced in her pursuit of justice was to have her raped again.

Cheuvront called another mistrial, this time during jury selection, saying it was not possible to get an impartial jury with all the attention.

Another trial was to be scheduled, but before that could happen, prosecutors chose to drop the case.

Cheuvront is retired from full-time district court work now, but he still sits on the bench part time.

The Bowen case is one he will always remember, because of the mix of factors, he said recently.

Besides the language issue, Pamir Safi had been accused of similar sexual assaults in the preceding three years. He was never convicted of them, and such evidence of prior sexual acts is usually not admissible.

But because they had similar circumstances, Cheuvront allowed them to be brought up at trial to help determine if Safi had a plan to have sex with a woman incapable of resisting or appraising the nature of her conduct on the night he encountered Bowen at the bar.

And when Safi's attorney sought to bar the prosecution from using rape-related words, Cheuvront signed the order.

In calling a mistrial in the second case, Cheuvront said he was put into a bad position because the ruling on restricting Bowen's language had become a major issue, and he could not give the appearance he was caving in to popular opinion or yielding to the news media.

The case was an education, he said.

Today, he said, he looks back on the language ruling as "kind of a mistake I made."

If the case had been tried a third time, he said, he had intended to tell the prosecutor that Bowen would have been able to say anything she wanted to say.

Looking back, defense attorney Mock sees how the ruling took on a life of its own, becoming politically charged with effects far greater than were ever intended.

All that was ever intended was to make the trial more fair, he said.

Words are weapons in the courtroom, said Mock.

"And in the process of persuasion, who gets to speak what words and when is very important," he said.

Rape implies physical violence. And by Bowen's own testimony, he said, there was none.

Mock said he has gotten calls since the ruling from lawyers across the country wanting guidance on the issue of restricting language in rape trials.

And he believes there have been varying degrees of success on language restrictions by other lawyers.

"I wouldn't want to say that it started a current that swept the country by any stretch of the imagination," Mock said. "Quite obviously, the tactic really doesn't apply in many criminal cases."

It's only in those cases with a clear credibility conflict, he said, in which it seems unfair for the prosecutor to suggest through language that the accused is guilty of a crime, when they wouldn't be able to say it directly under the rules of evidence.

"So where you stand on this issue really depends on where you sit," Mock said — in the witness chair as the accuser or in the defendant's chair.

Murphy, attorney and adjunct professor of sexual violence law at New England Law-Boston, represented Bowen in a federal lawsuit against Cheuvront and said the judge's order was both censorship and unconstitutional.

She argued that restricting Bowen's language violated Safi's rights, too, because the jury has a right to assess credibility for a fair trial for the accused, as well as the accuser.

The federal case, in which Bowen sought an order declaring that Cheuvront violated the Constitution, was dismissed by U.S. District Judge Richard Kopf, who called the lawsuit "very unusual."

In the aftermath of the case, Murphy said, she developed a judicial language project, using research to critique the language courts use in describing violence against women and children, to call attention to the harmful nature of certain language.

A first of its kind in the nation, Murphy said, it has been "phenomenally successful."

The case also caused a shift in awareness of the ability of victims to object, irrespective of a judge's presumptive authority.

"And that's terrific because that helps to hold courts accountable," she said.

Murphy said the way Bowen handled her own case and how she chose to handle Safi's behavior has allowed her to not only survive, but to thrive.

In telling her story to Ream, Bowen said the experience shaped her life's work. Back then, she thought she wanted to be an attorney. But she realized then that the court of public opinion was a powerful force.

It helped her understand how important media is to society, and she now has a career in communications.

When she went through the rape, she said, she had no idea what her future held.

Today, she has a career she loves, is married and has a daughter. She also has a ministry in which she helps to empower victims of sexual assault.

She ended her story this way: "I have a beautiful life and I am very grateful for the tapestry I've woven, despite being raped. But this rape was a crime. Being silenced by the judge was a travesty. And whatever good has come out of this is not going to stop me from saying that."

Shayla Funk didn't know what was happening when a Lincoln police officer asked her to come to the station, then led her to an interrogation ro…

A Lincoln judge since 1973, Cheuvront retires

Jeffre Cheuvront didn't come from a family of lawyers or grow up wanting to be one. He almost didn't study law at all.

Bambi Carnicle (left) protests outside the district courthouse in Lincoln in 2007 after Judge Jeffre Cheuvront ordered Tory Bowen not say she was raped during a 2006 sexual assault trial and a retrial the following year.