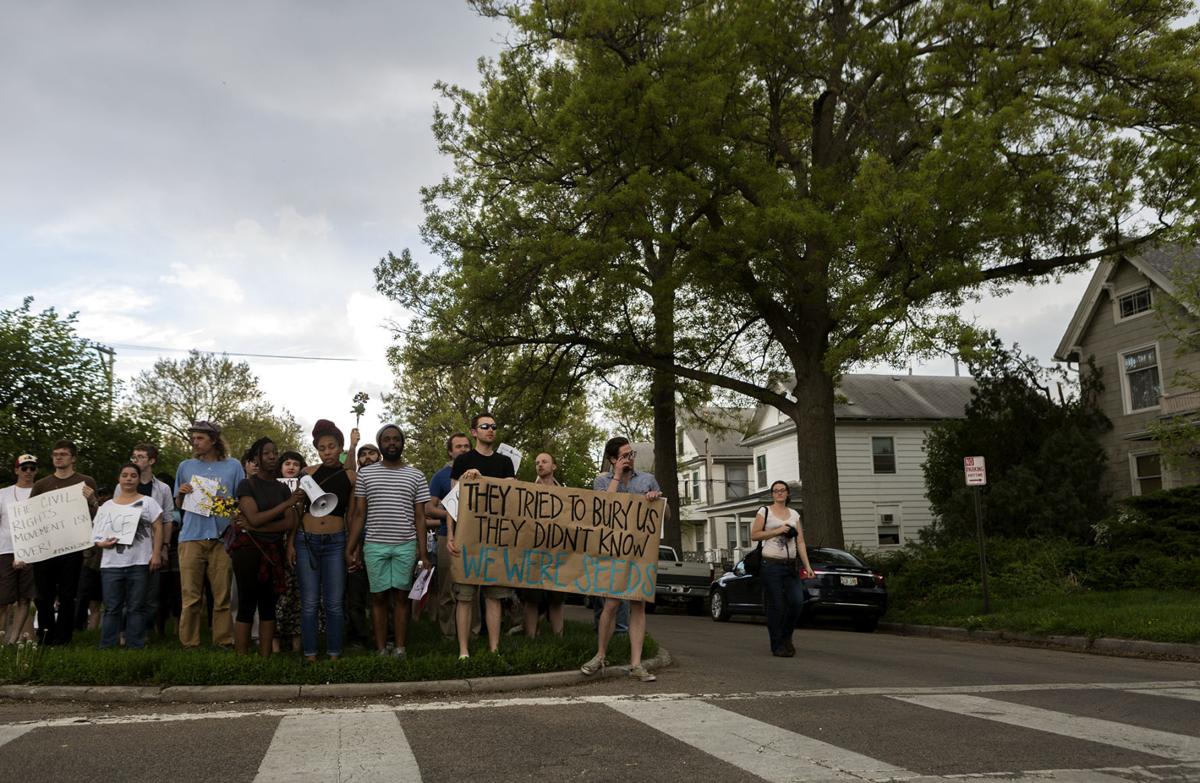 LINCOLN, NEB - 05/03/2015 Participants of the Baltimore Solidarity Walk march north on Goodhue Boulevard on Sunday, May 3, 2015, toward the capitol. ALLISON HESS/Lincoln Journal Star 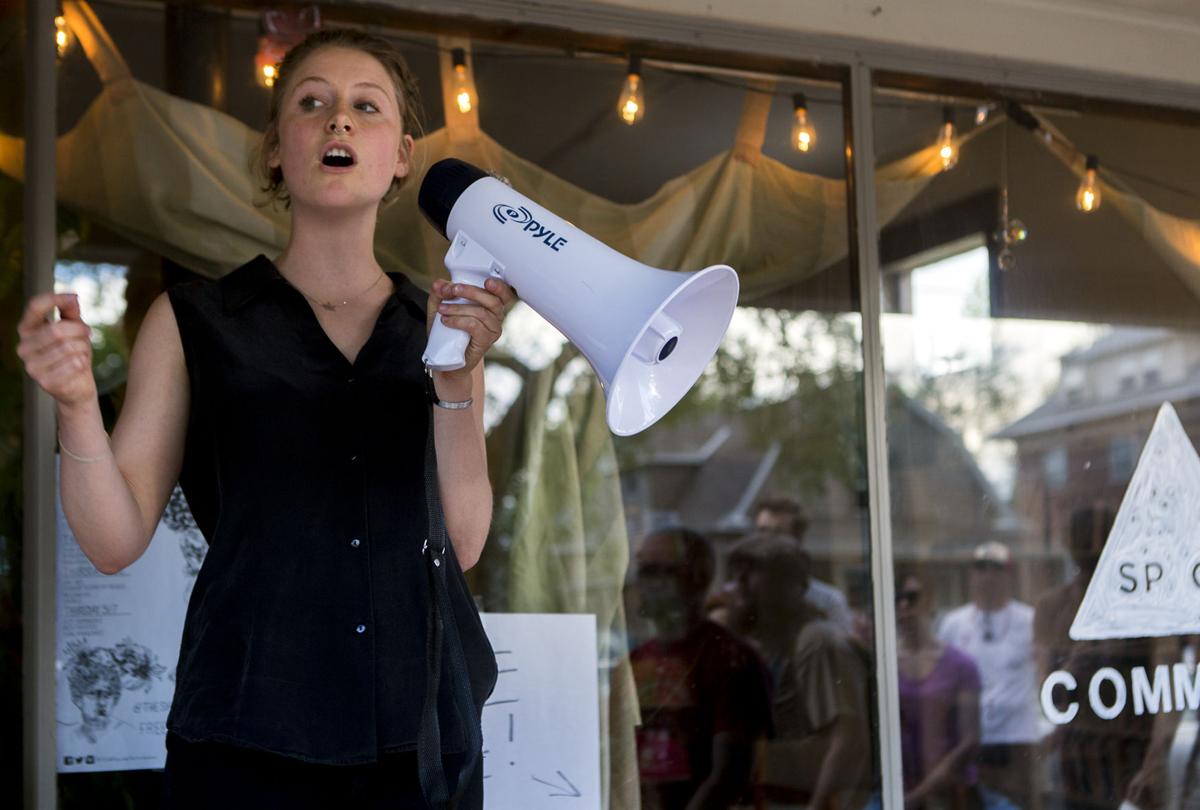 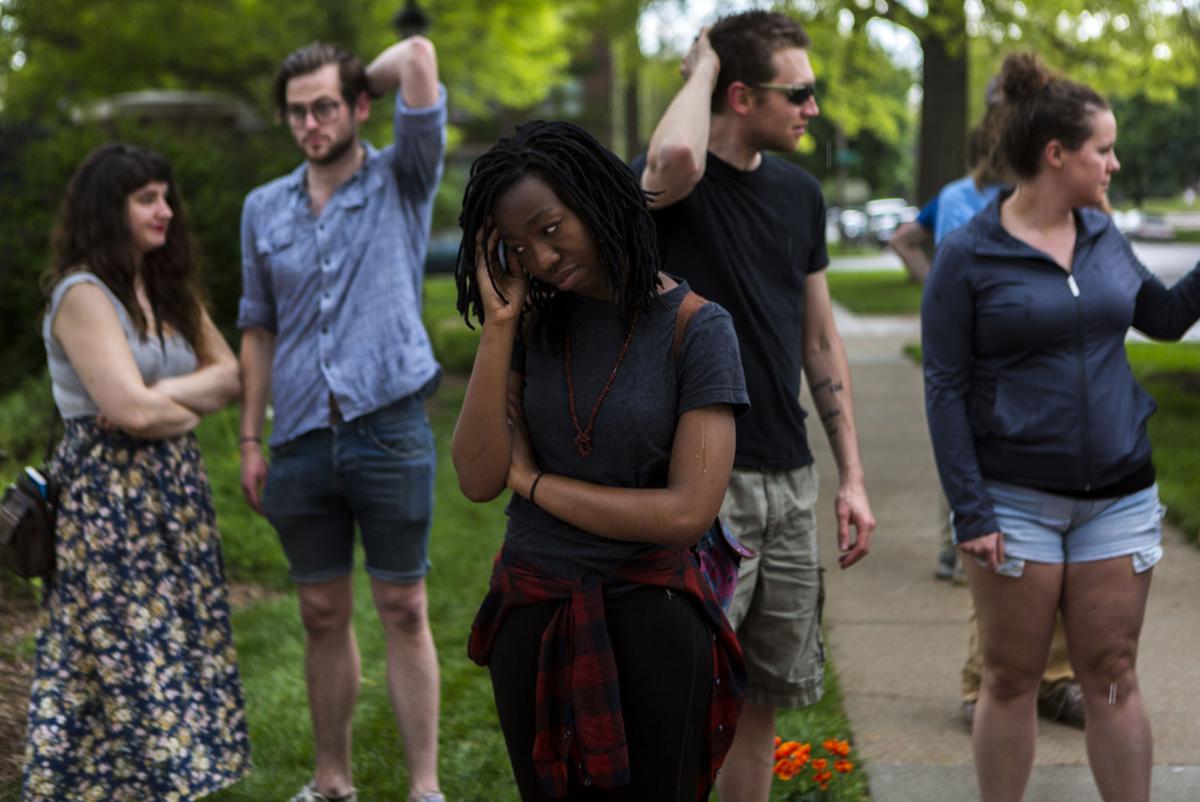 LINCOLN, NEB - 05/03/2015 Daise Imakando looks at posters and flowers that were placed in front of the Governor's Mansion during the Baltimore Solidarity Walk on Sunday, May 3, 2015. ALLISON HESS/Lincoln Journal Star 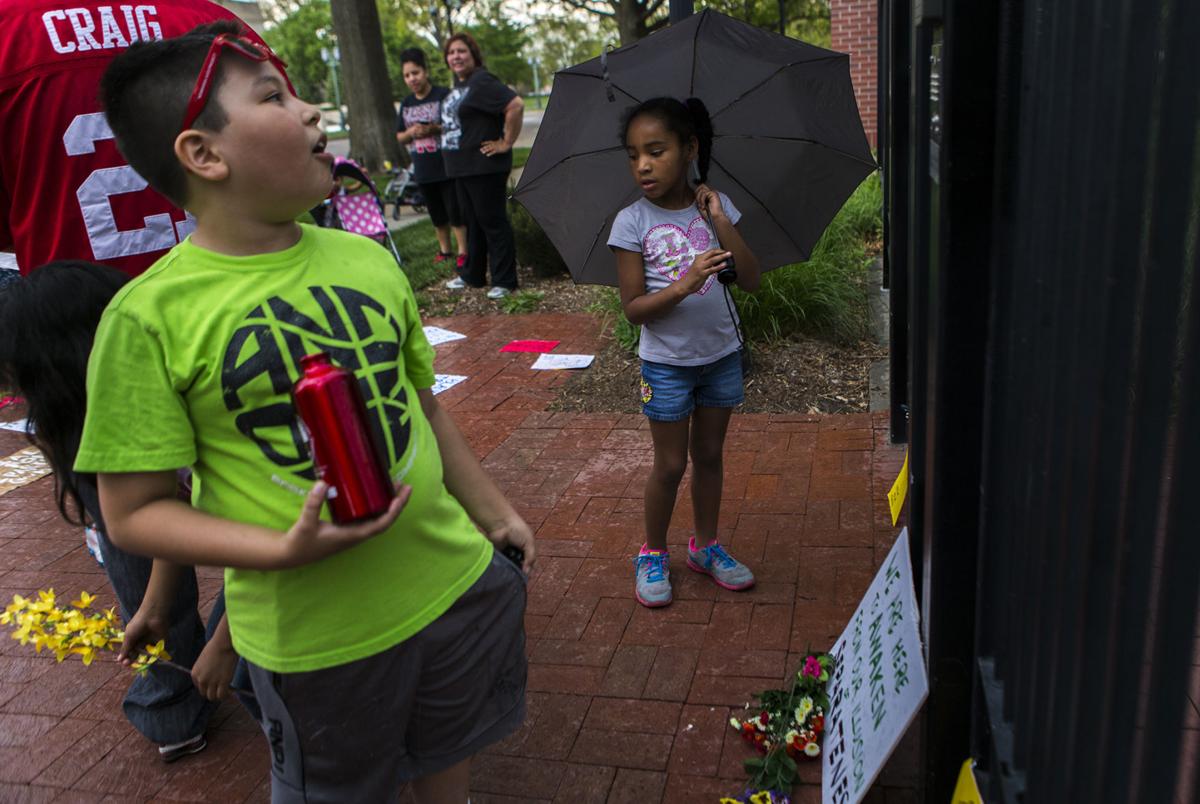 Adrian McCoy stands outside the Governor's Mansion, Sunday with posters and flowers during the Baltimore Solidarity Walk. 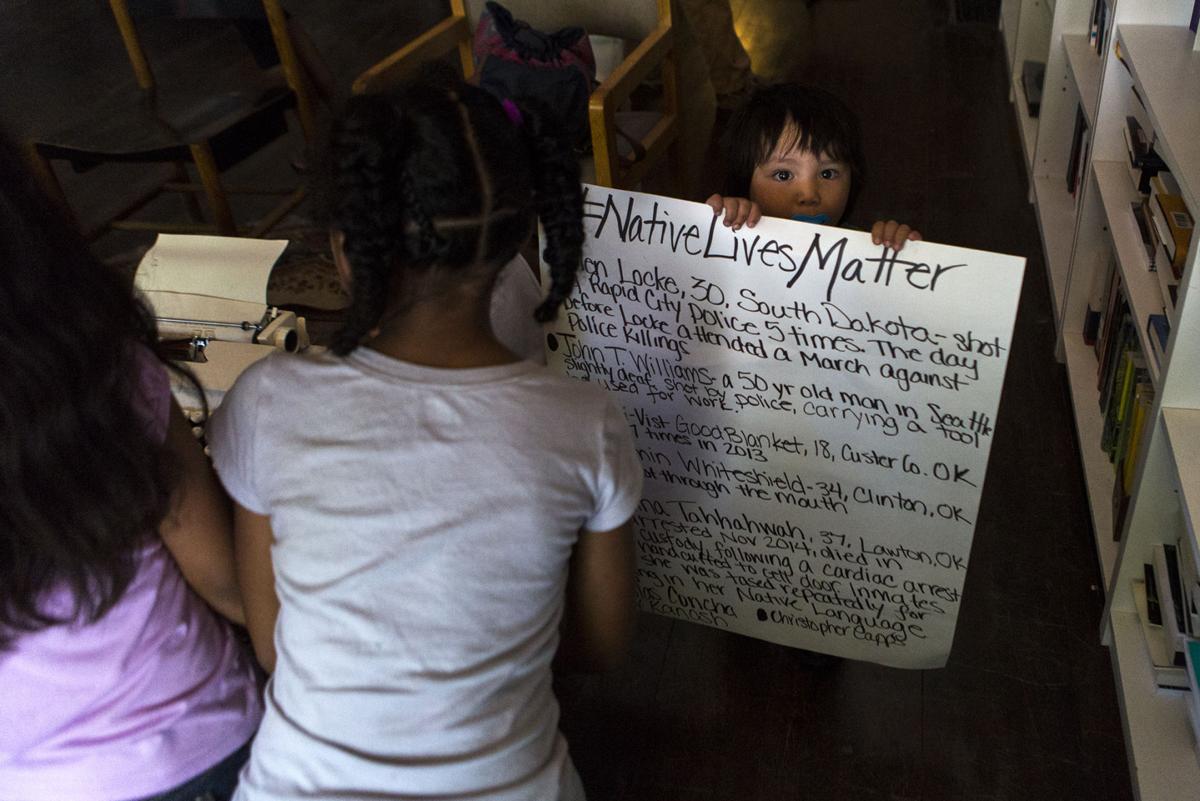 "No justice!" the voice introduced. "No peace!" the crowd responded.

A peaceful crowd of several dozen walked down Goodhue Boulevard toward the Capitol Sunday afternoon. They carried signs with faces of Michael Brown, Freddie Gray and Eric Garner along with those of other people of color killed during police interactions in recent months. Other signs read "#NativeLivesMatter" and "They tried to bury us but didn't know we were seeds."

WeMidwest, an organization dedicated to equality as well as connecting and raising community voices, coordinated the walk. WeMidwest also organized a walk and gathering from 13th and P streets to Pinnacle Bank Arena in mid-December in response to the deaths of Brown and Garner. This walk started at SP CE Commons on 14th and B streets and walked down Goodhue toward the Capitol. The diverse crowd consisted of blacks, whites, Native peoples as well as Latinos.

The walk came two days after six Baltimore police officers were charged in the death of Gray. Thousands have taken to the streets of Baltimore to protest his death in recent days.

"What kind of life is that if you're having to argue with somebody that 'no, like, my life matters?" said Vernée Norman, of WeMidwest. "That's the most basic thing."

Sean Miller with the Black Panther Party Power Movement spoke to the crowd with a bullhorn before it left SP CE.

"It has to stop," he said, choking up. "And it's not even about me or you. It's about these kids, man. You want this to be happening 30 years ago? I'm 34. Listen, my daughter's not going to be up there when she's my age talking about the same stuff, man. This has to stop. It really does."

"Lincoln is just as bad as Missouri, New York because they sweep this stuff under the rug," Miller said. "People come here as tourists and go 'oh, this is a good place to live' but it's not."

Miller cited the controversial case of Nebraska's two political prisoners, Edward Poindexter and Mondo we Langa (formerly David Rice), who were convicted of murder in April 1971. He asked where the protests were regarding their continued imprisonment.

Norman shared similar sentiments about Lincoln and Nebraska, saying that many of Nebraska's residents don't experience The Good Life.

"Those national issues are here locally as well," she said.

Norman, a senior at Union College, said she had to learn what it means to be a black woman in America on her own.

"For me, I don't really have limits," she said. "I can do anything I put my mind to and stuff. But I have to recognize that there are -- it's not just my own willpower. There are so many other things that come into play that I don't have control over."

The crowd ended its walk in front of the Governor's Mansion, where Lincoln resident Mary Ann Shiech spoke with security through a speaker at the gate.

"I told him to leave a message for Gov. Ricketts that black lives matter," she said.

Lincoln resident Vincent Martinez then spoke with the crowd.

The 24-year-old said there have been instances where he was denied a job because he isn't white.

"I'm tired of seeing the world hurt," he said.

Earlier this week, a 28-year-old Nebraska woman walked into a courthouse in Baltimore and defended men and women arrested during recent protes…

LINCOLN, NEB - 05/03/2015 Participants of the Baltimore Solidarity Walk march north on Goodhue Boulevard on Sunday, May 3, 2015, toward the capitol. ALLISON HESS/Lincoln Journal Star

LINCOLN, NEB - 05/03/2015 Daise Imakando looks at posters and flowers that were placed in front of the Governor's Mansion during the Baltimore Solidarity Walk on Sunday, May 3, 2015. ALLISON HESS/Lincoln Journal Star

Adrian McCoy stands outside the Governor's Mansion, Sunday with posters and flowers during the Baltimore Solidarity Walk.