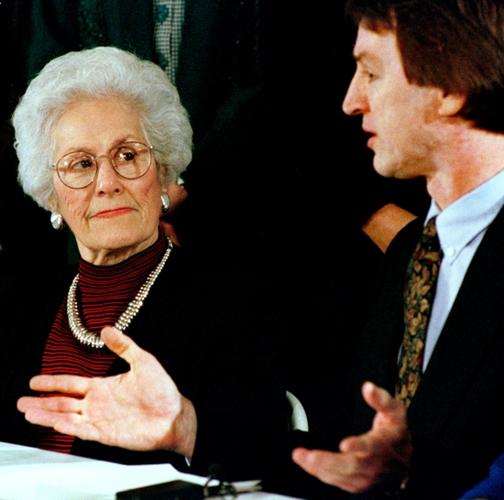 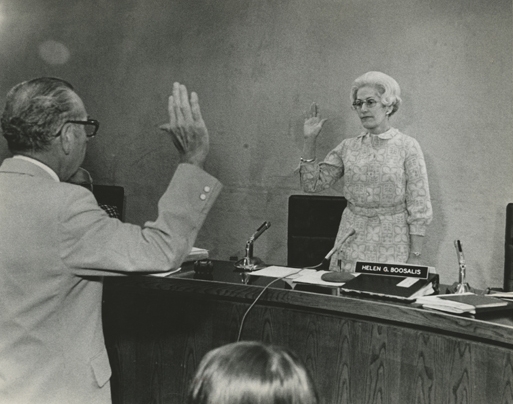 About 10 days ago, Boosalis was moved into hospice care. She died of a brain tumor.

Boosalis leaped hurdles, tore down barriers and wrote history during her 89 years.

Beginning with her election to the City Council 50 years ago, Boosalis walked point - or, more accurately stated, ran point - for women in politics.

After 16 years on the council, she was elected mayor in 1975 and served two terms.

Boosalis was the Democratic flagbearer in the first-in-the-nation matchup of major party female gubernatorial candidates in 1986, losing to Republican Kay Orr.

"She was a very accomplished woman who did a wonderful job as mayor of the city."

After her defeat, Boosalis continued to play a leadership role in national and state organizations as diverse as historic preservation, consumer advocacy and Arbor Day.

Boosalis was chairwoman of the board of directors of the American Association of Retired Persons in 1996-98.

"I want to help encourage people to go beyond what they think they're capable of doing," she said during an interview six months after losing the gubernatorial election.

"That's what they did with me," she said.

"You can accomplish what you didn't dream was possible. Take a little risk. Be prepared. Set your goals high."

The springboard for Boosalis was volunteer work with the League of Women Voters in the 1950s helping spearhead support for a "strong mayor" form of government in Lincoln.

Her initial encouragement came from fellow members of the League who elected her their president and then urged her to seek a seat on the City Council in 1959.

Boosalis upset an incumbent councilman and was re-elected three times.

Then, she upset incumbent Mayor Sam Schwartzkopf in 1975.

Her eight years as mayor was the defining moment.

A champion of neighborhoods and advocate for the aesthetic protection and enrichment of the community, she often went head-to-head with a male-dominated business community that had become accustomed to having its way at city hall.

Boosalis stood her ground and emerged as resolute, bold and tough.

Years later, one Lincoln businessman who no longer lives in the state recalled with amusement how his colleagues would "go into the mayor's office to give Helen a piece of their mind and come out with their head on a platter."

A high-energy dynamo, Boosalis lifted the visibility of the mayor's office by her active engagement in the community and encouraged widespread citizen involvement.

It was "not your father's city hall," her daughter, Beth Boosalis Davis, wrote in a biography of her mother published last year.

Before her city hall days were done, Boosalis served as the first female president of the U.S. Conference of Mayors in 1981-82.

Boosalis told the mayors they held "the most challenging, and also the most rewarding, job on earth."

The Boosalis-Orr contest in 1986 attracted national attention as two determined women scrapped toe to toe for the governorship.

In a rich marker dramatizing the change since Boosalis first sought elective office, it could be said that only one woman stood between her and the governorship.

The winner would succeed Democratic Gov. Bob Kerrey, who had asked Boosalis to step in as director of the Department of Aging in his administration two weeks after she left the mayor's office.

In the end, Orr prevailed by four percentage points and moved up from the position of state treasurer to become the state's first female governor.

On Monday, Orr spoke of the first time she met Boosalis after both women had been nominated.

"I knew in many ways, and especially because of her experience as mayor and her political involvement, that she would be a formidable opponent," Orr said.

"And then I saw how enthusiastic and energetic she was and realized what degree of physical energy would go along with that.

Orr recalled that it was Boosalis who proposed that both of them ride atop elephants from the train depot to Pershing Auditorium when the circus came to town.

"Helen had a great sense of humor," Orr said, and the two women rode all the way when the animals were paraded through downtown Lincoln.

Helen Geankoplis was born in Minneapolis on Aug. 28, 1919. Her parents were Greek immigrants.

In Minneapolis, she met Mike Boosalis, a student at the University of Minnesota. He was drafted into the military in 1941 and soon entered World War II.

They were married in 1945 when he was home on furlough. Their daughter, Mary Beth, was born in 1948.

The Boosalis family moved to Lincoln in 1951 when Mike accepted an agricultural research and teaching position at the University of Nebraska.

Before long, a 1950s housewife was deeply engaged in her new community.

During extensive research for her book, "Mayor Helen Boosalis: My Mother's Life in Politics," Beth Boosalis Davis said, she learned much more about her mother.

"I now view Mom's talents not as those of one perched on some pedestal high above the rest of us, but as those of an ordinary woman with an extraordinary belief in people and in the value of each person's ability to contribute to community, to family and to the world," she wrote.

Boosalis summed up her own priorities in a 1987 interview.

"Personal growth and service - those are the important things," she said.

It's the first time in a decade NU regents have taken what is widely considered in academia to be an extraordinary step in dismissing a faculty member with tenure.

The woman told police that Joseph, 54, "pushed me on the couch and strangled me," police alleged in new court filings.

Hundreds of pages of complaints identify dozens of supervisors as discriminators or enablers, including the last two mayors, four police chiefs, three assistant police chiefs and 27 captains or sergeants.

Joseph was arrested Wednesday afternoon following a domestic service call from the coach's home, the Lincoln Police Department said in a news release.

The quiet suggestion is that Gaylor Baird spends most of her time there, rather than in the city she leads. The mayor says that’s just not true.

Years in the making, Lincoln South Beltway to open later this month

The 11-mile, $352 million four-lane roadway stretches from U.S. 77 to 120th Street. It is meant to reduce congestion on Nebraska 2 through Lincoln.

The woman's ex-husband called police at around 11 p.m. Wednesday as she drunkenly texted him about plans to kill family members, police alleged in court filings.

Authorities towed the Ford from the lake and found it had been stolen Nov. 21 from an east Lincoln gas station after the vehicle's owner left it unlocked and running.

Buongkhoy Wal, 18, is charged with attempted possession of marijuana with intent to distribute and discharging a firearm during a drug trafficking crime.

"This is just a good young man who had a party," the Sutton man's defense attorney said at Wednesday's hearing, more than a year after the deck collapse that injured 17.

This Day in History: The Washington Monument is completed

The Bordeaux region, in crisis, calls for help to pull out vines

The Bordeaux region, in crisis, calls for help to pull out vines

Shocking royal family interviews that changed the course of ‘The Firm’

Shocking royal family interviews that changed the course of ‘The Firm’

Mayor Helen Boosalis takes an Oath of Office on May 20, 1975. (LJS file)
© Copyright 2022 The Lincoln Journal Star, PO Box 81869 Lincoln, NE 68501 | Terms of Use | Privacy Policy | Do Not Sell My Info | Cookie Preferences
Powered by BLOX Content Management System from TownNews.com.
You don't have any notifications.