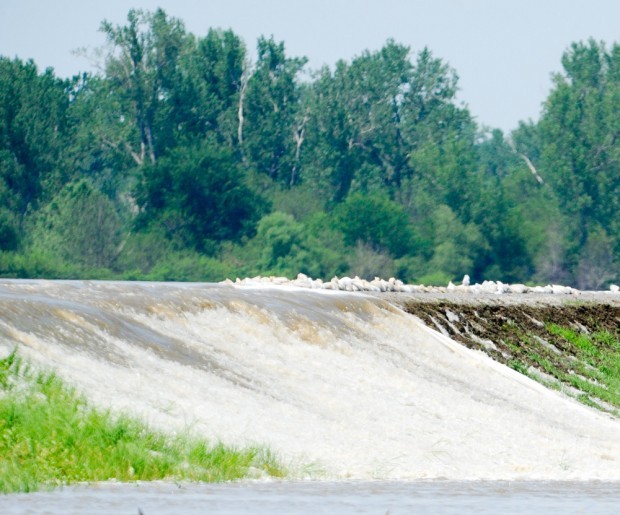 Floodwaters from the Missouri river overtop a levy in Brownville, Neb., Sunday, June, 19, 2011. When the Missouri River reached 42.5 feet, or 899 feet above sea level Sunday morning, the Nebraska Public Power District issued a flooding alert for its nuclear power plant, Cooper Nuclear Station. Cooper, located near Brownville, is at 903 feet elevation, and NPPD officials said the river would have to climb to 902 feet at Brownville before officials would shut down the plant. (AP) 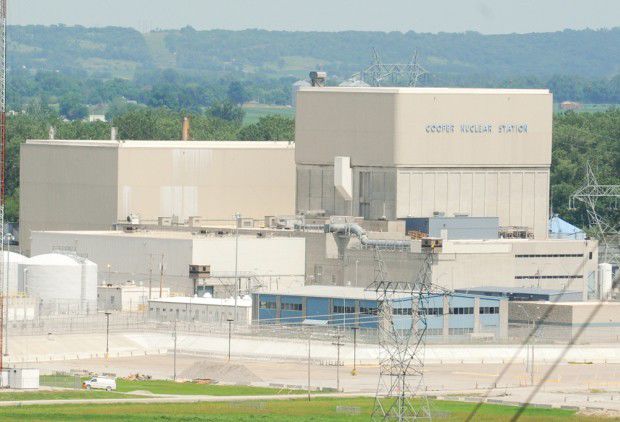 The Cooper Nuclear Power Station is seen near Brownville in 2011.

By Sunday evening, the water level was only about 3 inches below the level at which Nebraska Public Power District said the plant would have to be shut down. But a National Weather Service hydrologic chart indicated the river level may have peaked and could be dropping.

"Our guys were reporting it was leveling off," Mark Becker, spokesman for Nebraska Public Power District, said Sunday afternoon. But after he commented, the level rose another half foot.

And the National Weather Service said there was the possibility of heavy rain Sunday night and even heavier rain Monday.

* The Iowa Department of Transportation said it has closed all lanes of Iowa Highway 2 starting at the Interstate 29 interchange in Fremont County and continuing across the Missouri River to Nebraska City. It's expected to be a long-term closure.

The Nebraska office emphasized that Highways 2, 159 and 136 are open in Nebraska, but motorists cannot cross the borders at those points into Iowa or Missouri.

NPPD, which owns and operates the Cooper power plant, said the "notification of unusual event" it declared was made as part of emergency preparedness procedures the station follows when flooding occurs. The procedures dictate that when the Missouri River's water level reaches 42.5 feet, or greater than 899 feet above sea level, a notification of unusual event is declared.

Water levels at the Brownville gauge increased approximately two feet in a 24-hour period from 5:30 a.m. Saturday to 5:30 a.m. Sunday.

By Sunday morning, the river stage at Brownville had reached 44.4 feet, surpassing the previous record crest of 44.3 feet set in 1993 flooding. By 3 p.m., the Brownville gauge was at 44.7 feet, the equivalent of 901.2 feet above sea level. Three hours later, the level had risen another half foot.

NPPD said the flooding posed no threat to plant employees or to the public and the plant continues to operate safely.

A "notification of unusual event" is the lowest and least serious of four emergency classifications established by the Nuclear Regulatory Commission for nuclear power plants.

Nebraska's other nuclear power plant, Fort Calhoun, already is shut down. Omaha Public Power District took that plant, north of Omaha, offline in April for routine maintenance. But it now is surrounded by floodwaters, and OPPD has said the plant won't be restarted until the flooding recedes.

Col. Bob Ruch of the Corps of Engineers attributed the surge in the water level to heavy rain on the Nishnabotna River, which flows into the Missouri River, and to some erosion along a levee upstream at Hamburg, Iowa, that created a water pulse.

Water was flowing over a levee near Brownville and into farmland but the levee was being built up to alleviate that, said Jodi Fawl, spokeswoman for the Nebraska Emergency Management Agency.

Nemaha County emergency manager Renee Critser said that as workers were building up one section of the levee Sunday to alleviate the overtopping between Brownville and Nemaha, water would flow over in another spot. Workers continued Sunday afternoon to add sandbags along the levee to keep the water at bay.

"It's nothing major," Critser said.

On the other side of the river, the National Weather Service and Corps of Engineers said several levees in northern Missouri were failing Sunday to hold back the surge of water being released from upstream dams.

There were no reports of levees topped or levee breaches from the Hamburg area in Fremont County across the river from Nebraska City. A large breach sent floodwaters heading toward Hamburg last week, but a secondary levee finished earlier last week appeared to be keeping the water away from the town of 1,100 people.

To the south, a hole in the side of a Holt County levee continued to grow Sunday, inundating the state park and recreational area of Big Lake, 78 miles north of Kansas City.

Corps of Engineers spokesman Kevin Wingert said engineers would monitor the overtopping to try to determine how much of an effect it will have on water flows downstream. "It's too early to say what the full impact will be on it," he said.

Holt County commissioner Mark Sitherwood said U.S. 159 is closed south of Big Lake because water is pouring over the road, and most of the west side of the community is underwater.

"It's going through in one place that we know of, and overtopped in numerous places, and there is seepage everywhere," Sitherwood said.

He said most people evacuated well in advance of the flooding. Those who stayed were told Saturday night that water was flowing into the area. A few people live in cabins that have been built above ground level and decided to stay, Sitherwood said.

"Everyone up here knows the routine," he said.

The Big Lake area, where water has been high for the past couple of weeks, has experienced major flooding in three of the last five years. But Sitherwood said this year promises to be much worse following weeks of high flows and increasing releases from the main stem dams in Montana and the Dakotas.

"I know they wouldn't admit it, but this is a manmade event," said Sitherwood, echoing a sentiment common in the area that the Corps of Engineers is mismanaging the Missouri River. "Nobody is going to tell me it isn't. It is probably going to be historical."

The commissioner said his own home is at risk. "Thank you, Corps of Engineers," he said.

The corps has said unusually heavy rains, not mismanagement, are to blame.

"What we are dealing with is a massive weather system that put a lot of precipitation in the system, particularly in Montana and northern Wyoming, in the month of May," Wingert said. "The end result is that water has to go somewhere." Before the rain, the corps already was dealing with record snowfall in the mountains above the Missouri and Platte rivers.

In Missouri's Atchison County, there was a nearly steady flow of water over a half-mile stretch of a levee near U.S. 136 and overtopping at various points to the north that area, said Mark Manchester, deputy director of emergency management for the county. He said the water was flooding several thousand acres of farmland, but so far no homes had been inundated since a breach last week caused about a dozen of the homes to take on water.

Manchester said the river level had reached 44.6 feet, the highest on record and about 4 to 5 inches higher than 1993 flooding levels. He said minor flooding starts at 33 feet and major flooding at 43 feet.

He said residents in the area already had evacuated their homes, and officials who operate the levee went up in a helicopter and saw several "pretty good size holes starting to form."

The officials are predicating another breach, which could displace up to 200 more people.

"That would be worse-case scenario," he said. "The information we are getting from the corps is that it's possible."

Drivers deluged by bridge and road closures due to floods

Record flood levels on the Missouri River have closed U.S. Highways 136 and 159 in northwest Missouri, which means drivers can't use bridges at Brownville and Rulo.

Floodwaters from the Missouri river overtop a levy in Brownville, Neb., Sunday, June, 19, 2011. When the Missouri River reached 42.5 feet, or 899 feet above sea level Sunday morning, the Nebraska Public Power District issued a flooding alert for its nuclear power plant, Cooper Nuclear Station. Cooper, located near Brownville, is at 903 feet elevation, and NPPD officials said the river would have to climb to 902 feet at Brownville before officials would shut down the plant. (AP)

The Cooper Nuclear Power Station is seen near Brownville in 2011.