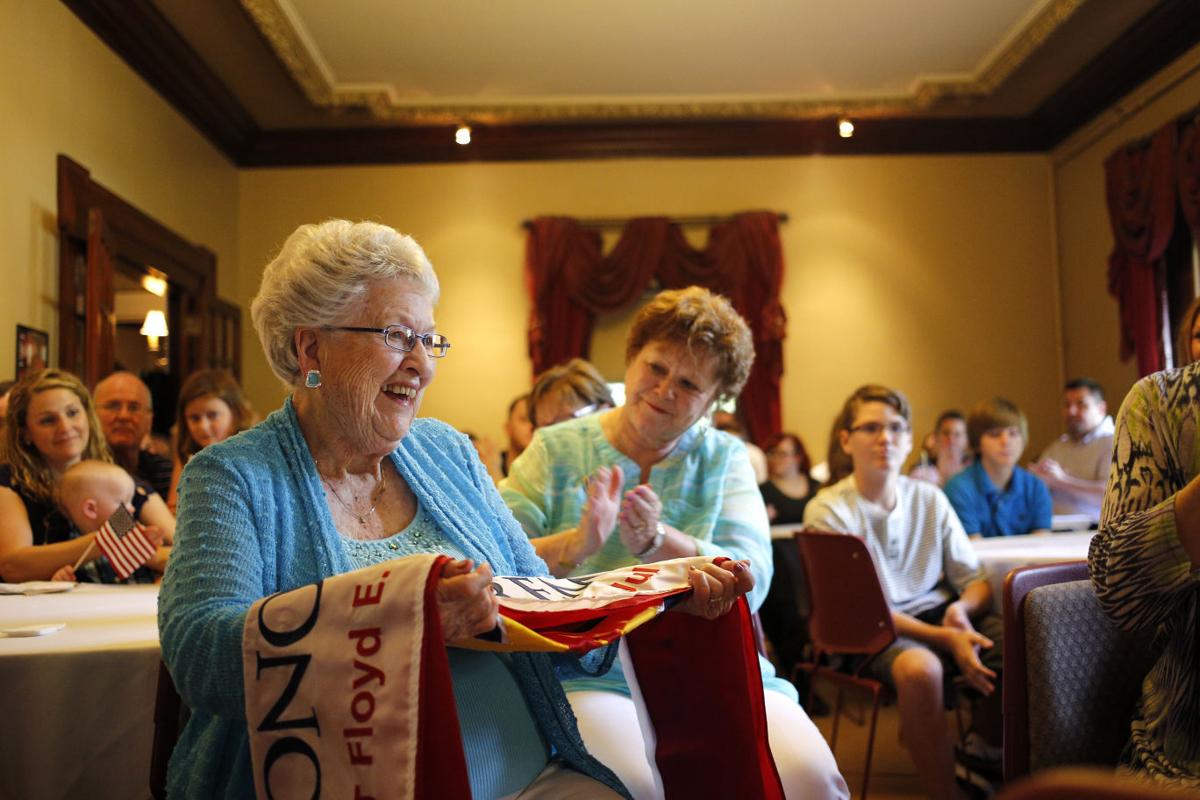 Mabel Stansbury, sister of the late Staff Sgt. Floyd E. Whittaker, receives an Honor and Remember flag during a ceremony Sunday at the Ferguson House in Lincoln. Whittaker died while serving in World War II. 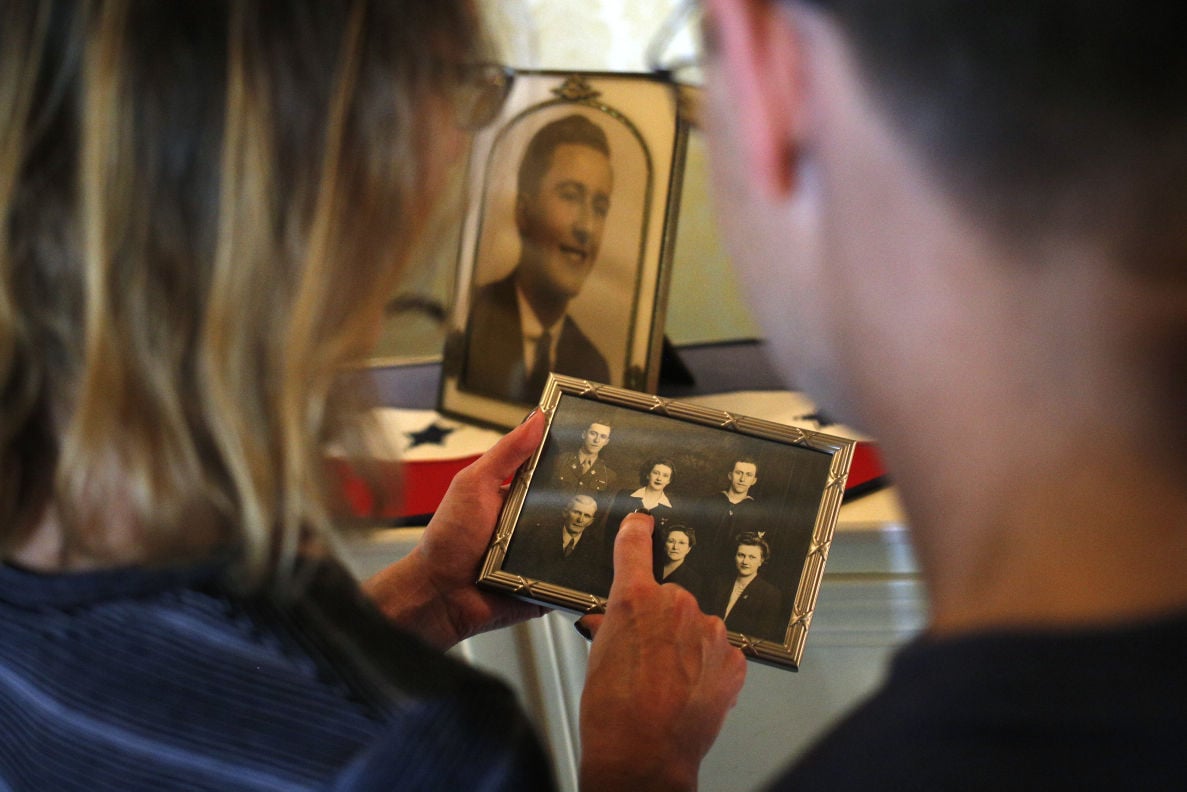 Guests at Sunday's flag ceremony look at a picture of Floyd Whittaker's family, including (top, from left) Floyd, his sister Norma Jean and brother Leonard, (bottom, from left) parents Tom and Elizabeth, and sister Mabel. 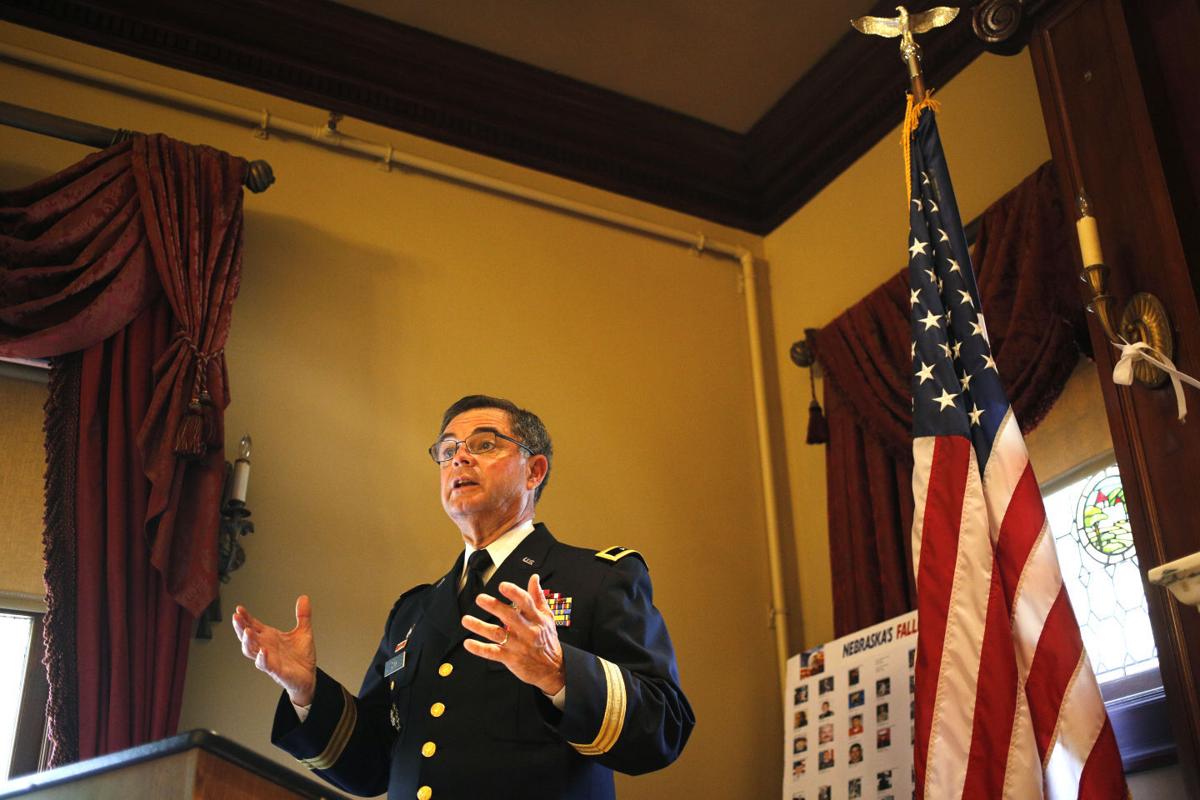 For as long as her kids can remember, Mabel Stansbury has talked about Floyd Whittaker.

From the funny stories of Whittaker annoying her with trained goats to the sweet ones of how he brought his soon-to-be wife from Memphis to the family farm in Wymore, Stansbury shared the stories so her family would better know her quiet little brother.

Staff Sgt. Floyd Whittaker of the Nebraska Army National Guard died on July 15, 1944, killed in the battle of St. Lo in France during World War II.

On Sunday afternoon, about 60 members of Stansbury’s family gathered at the Ferguson House on South 16th Street to commemorate Whittaker's service and sacrifice. Stansbury said she felt like she’d found the answer to her lifelong search.

“It’s an honor,” Stansbury said. “I know Floyd would be happy to see that we have this.”

The ceremony, hosted by Nebraska’s chapter of the Honor and Remember Society, included a flag presentation. The volunteer organization, which aims to recognize soldiers who died in service, has honored about 80 families in Nebraska since forming in 2013.

Stansbury’s daughter, Judy Haney, said when she heard about the organization's flag ceremonies, she saw it as the perfect gift for her mother.

Haney also said it brought the family together. As they went through a chest where Stansbury kept letters, a sleeping bag and other keepsakes, Haney said the connection with Whittaker started to take shape.

“It made it more personal for all of us to see his handwriting and the kinds of things he kept,” Haney said.

Going through those pieces of Whittaker’s past added another layer of depth to what they already knew about the Blue Springs native.

They knew Whittaker was born in 1919, and grew up on the family farm in Wymore with his older sister and two other siblings — Leonard and Norma Jean.

They knew how close farm life had made them. However, they also knew how the siblings got on each other’s nerves. Stansbury said annoying her was her brothers’ best entertainment.

“They were loud and ornery,” Haney said. “They were the typical little brothers.”

The process of going through her brother’s past and consolidating his life for that 30-minute ceremony was also an emotional hurdle for Stansbury. Losing her brother was an experience she never forgot.

“It was really a blow to our family, as it was to so many others,” Stansbury said.

That sentiment was reflected by John Adams, a volunteer with the Honor and Remember Society, who spoke before the flag presentation. He highlighted the importance of events like these, because so many families across the nation can share similar stories.

But as long, and at times difficult, as the journey’s been, Stansbury feels like she’s done her job. After her other two siblings died, she felt it was her responsibility to carry on Whittaker’s story.

SEWARD — Barb Koehlmoos never got to meet her uncle Floyd Whittaker, but she knows him well.

Mabel Stansbury, sister of the late Staff Sgt. Floyd E. Whittaker, receives an Honor and Remember flag during a ceremony Sunday at the Ferguson House in Lincoln. Whittaker died while serving in World War II.

Guests at Sunday's flag ceremony look at a picture of Floyd Whittaker's family, including (top, from left) Floyd, his sister Norma Jean and brother Leonard, (bottom, from left) parents Tom and Elizabeth, and sister Mabel.