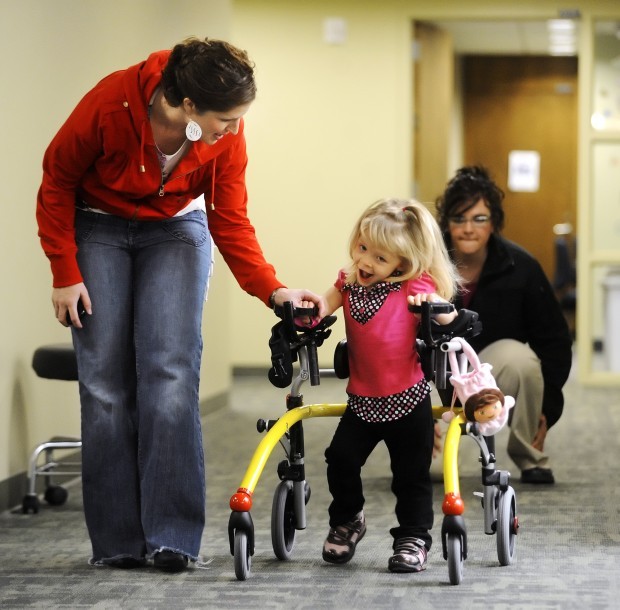 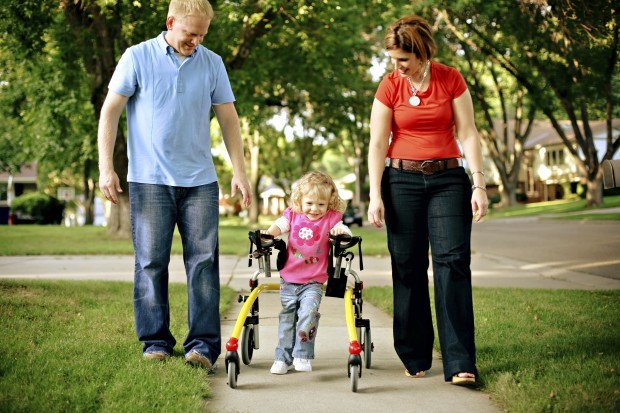 Brandon, Alexis and Tiffany Verzal of Lincoln are shown in this undated photo. Alexis has been a patient at Madonna Rehabilitation Hospital after a brain injury which damaged her balance, movement and vision. (Courtesy photo/Kabloom Photography 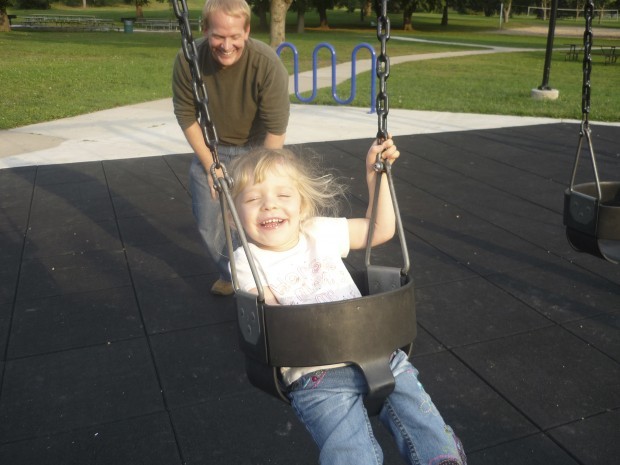 Tiffany Verzal framed a home video camera on 14-month-old Alexis, her comatose daughter clinging to life in the intensive care unit of a Texas hospital.

It had been two days since a day-care provider had frantically passed on news of their daughter's accident -- a story now unraveling amid injuries consistent with shaken baby syndrome.

Inside Alexis' head, pooling blood had crushed a swath of brain above her left ear, a region important to balance, movement and vision.

Investigators say Alexis may have been thrown, and the day-care provider's trial starts next month.

The couple hadn't slept much since that call to their jobs at the Texas A&M football stadium April 3, 2008.

Tiffany and Brandon learned later the ambulance flight crew transporting Alexis had paused to pray before takeoff, not expecting her to survive the trip.

A social worker was now seeking permission to videotape their baby for evidence. And Tiffany wasn't about to entrust that to an amateur.

Brandon was then director of Texas A&M's 12th Man Productions -- the Aggies' counterpart to HuskerVision -- and Tiffany was its manager. They'd won awards and had segments air on national TV.

He's from Omaha. She's from Cozad. They met as student aides in the NU athletic department.

Now, in picking up the camera, she was placing a tool of their profession between them and their baby.

So that's why he asked.

We need to do it, Tiffany replied.

It could be important some day.

(Above) Alexis Verzal is shown in the hospital shortly after her injury. Authorities believe her day-care provider shook her and threw her, causing a brain injury. (Courtesy photo)

Madonna's Rehabilitation Hospital's annual Goal Awards come wrapped in tradition, a kind of thanksgiving for those who endure the hard first winter of recovery from severe injuries.

The pilgrimages of four patients are profiled to represent the struggle. The 5-minute presentations distill events that often start with a car crash and end with fully recovered patients.

After last year's ceremony, hospital officials wondered if a different approach might focus more on the hard steps between crash and recovery, said spokeswoman Molly Nance.

"There was no sense of what it took to get there," she said.

The idea of a documentary wasn't a leap, but they weren't comfortable entrusting newly hurt patients to commercial filmmakers.

Early on, it was a good thing they were ignorant of what recovery would mean for Alexis, Brandon said.

Had someone told them on Day 2 they'd still be at it 18 months later, he said, they would have needed to be institutionalized.

Now, he added, they're comfortable thinking it may require the next 20 years.

"It had to be a gradual awakening for us," he said.

One day, they left home with a singing child, never to return. Except to fetch clothes, they wouldn't go back to their house until weeks later -- to close it up for the move to Lincoln.

Like many others who come to Madonna, their lives broke into two parts -- before and after. The goal since? To have the after and the before resemble each other as closely possible.

Doctors never told her Alexis would awake normally after she stopped getting drugs to induce a coma.

But they also didn't say it wasn't possible.

"I thought Alexis would be one of those people," Tiffany said.

Alexis was blind, couldn't swallow and couldn't move. Her eyes turned upward into her skull.

A 25-year health-care professional told the young couple it could be the drugs wearing off and advised they take Alexis home to see how she did.

Instead, they searched for the country's best pediatric brain injury programs, which surprisingly provided them few options.

Madonna, in their home state, permitted them to quit their jobs and accelerate plans to start their own company, V2 Content.

If it failed, surely they'd be able to move into a parent's basement.

"We were willing to take the hardest fall," Brandon said.

Nance remembers feeling heartsick when the Verzals arrived at Madonna, a young family with their rag doll child.

It seemed impossible then that Alexis might regain more than a fraction of what she'd lost.

And then, one day after so many others, the girl's eyes tracked a light. Music became the next medium they could use to reach her.

Meanwhile, the Verzals became part of the Madonna community, sharing hopes, worries and milestones with other patient families and therapists.

They were spending five days a week at Madonna eight months later when Tiffany e-mailed Nance to discuss a documentary.

It will have its public premiere at Mary Riepma Ross Media Arts Center on Thursday.

Afterward, the Verzals will set out on the film festival circuit.

"The story's not over for any of these kids," Nance said.

For each subject, Tiffany said, "It was easy to see what everybody's 'things' were."

For one, an athlete, it was improving his times on a treadmill, Tiffany said.

The therapists try new things until something causes a spark, and then they work for hours to capitalize on it, she said.

Before rehabilitation, Tiffany said, all discussions about Alexis were based on what had been lost, on reading her MRI scans.

"After Madonna, it wasn't about what she wasn't going to do any more but what she would get to do," she said. "Rehab is not about scans but about tapping into the person."

The Verzals sifted through 200 hours of filming to find the breakthroughs key to each patient's recovery, Brandon said.

"The moments that bring us to tears are the moments of the other people," he said.

"We'll be sitting there at night, and we'll both have tears in our eyes," he said. "You always think, 'I don't know how they're doing it.'"

He added that for some reason: "We don't think of how we're doing it."

(Above) Alexis Verzal of Lincoln is one of four brain-injury patients who are the subject of a documentary filmed by her parents, Brandon and Tiffany. (Courtesy photo / Kabloom Photography)

Alexis typically now informs therapists of what she wants to do that day.

She receives electrical impulses to stimulate certain muscles, Tiffany said, and on one recent day the 2-year-old ordered her therapist to, "Turn on my buns."

Some day, maybe, Tiffany said, Alexis will be able to walk on her own.

If not, Brandon added, the progress she's made is gratifying.

Anybody who watches the film can't help but come away with a deep understanding of the need for intense rehabilitation, Tiffany said.

They think with horror at the advice they take Alexis home to see what happens.

Had they done that, both say, there would have been no way their story could have moved beyond that day when a hurting mother turned on a camera.

Reach Mark Andersen at 473-7238 or mandersen@journalstar.com.

"Pathways," which follows four brain-injury patients of different ages along unique paths to various stages of recovery, will be shown at the …

Brandon, Alexis and Tiffany Verzal of Lincoln are shown in this undated photo. Alexis has been a patient at Madonna Rehabilitation Hospital after a brain injury which damaged her balance, movement and vision. (Courtesy photo/Kabloom Photography