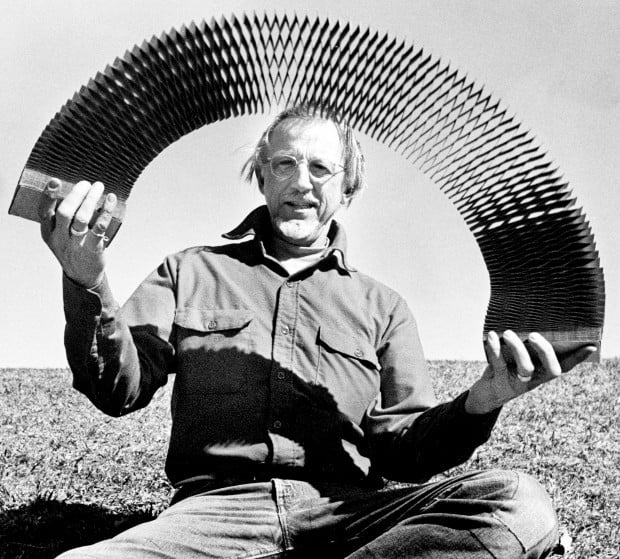 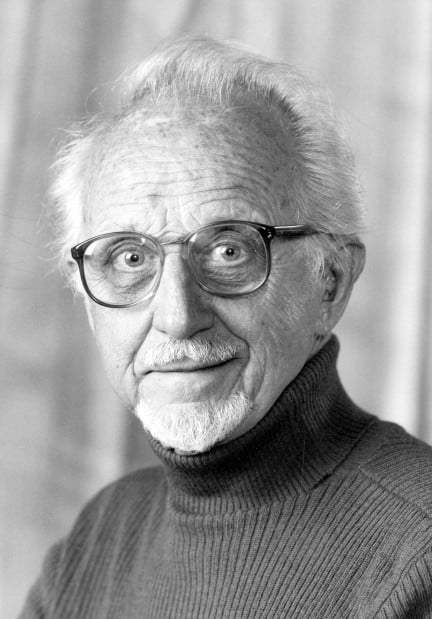 Reinhold Marxhausen, an inventive artist whose sound sculptures landed him on late-night television and who has two mosaics in the Nebraska Capitol, died Saturday. He was 89.

Born in Minnesota and a veteran of World War II, Marxhausen moved to Seward in 1951 to be the first art teacher at what was then Concordia College. He taught there for 40 years, but he was far more than a professor.

"It's hard to put one thing down," said his wife, Dorris. "This is his diversity. I wouldn't want him being called only an art professor. He was happiest when he was exploring a new medium. The two Great Hall murals in the Capitol were significant. That was a competition. He was the only Nebraskan of the five artists that participated in all that."

Marxhausen had only done murals for an elementary school when he was selected in 1965 to create two of the six mosaic murals in the Capitol.

"He did a lot of stuff that was photography, but you wouldn't call him a photographer," son Paul said. "He did sculpture, but he wasn't a sculptor. He made murals, but he wasn't just a muralist. He was an artist. I think, more than anything else, it was teaching others to see the art in the world."

Marxhausen got his widest exposure when he appeared on "Late Night with David Letterman" in 1986, demonstrating his Star Dust moon rocks -- palm-sized stainless steel objects made to look like rocks but with wires inside that created a symphony of sound. His work was included in nearly every national exhibition of sound-related art in the 1980s.

Marxhausen considered the Capitol murals his proudest accomplishment. In addition to those, he has murals in Lincoln Southeast High School, at a Seward bank and at Lutheran churches throughout Nebraska. He also created major work for the headquarters of the Lutheran Church-Missouri Synod in St. Louis.

At a 1987 tribute banquet held in his honor, Marxhausen said he wasn't sure there even was art in Nebraska when he moved to Seward.

"Being here became a challenge, and I just think everything I did here was innovative," he said then. "I had to be innovative in order to get people to notice. You have to be nontraditional."

While others are remembering Marxhausen for his art and his contributions to Concordia, where the art gallery is named in his honor, son Karl had different memories when he signed the funeral home guest book.

"I wrote, ‘I remember when my dad built a sandbox for me and went on walks with his boys on Plum Creek out in nature.' People are looking at the bigger picture. I work in the school system, and I see kids that don't have dads. I had a dad. I had a stay-at-home mom and a dad."

Dorris Marxhausen said her husband began to get forgetful in about 1994 and later was diagnosed with Alzheimer's disease.

"It's been a darned long time since he was capable of producing anything," she said.

In a statement sent to students and their parents, Lincoln Public Schools said Kennedy Bowles, a senior, was not expected to survive her injuries.

In opening statements Thursday in Katerian LeGrone's sex assault trial, the state painted a picture of a then-Husker football player who thought he could do whatever he wanted and a young college student too frightened to stop him.

The note on the floor of the women's bathroom also had a license plate number on it. Police began looking for a gray Chevy Trailblazer, which they spotted 4 miles away.

Officer Erin Spilker said a 27-year-old woman told police she was working when a man came in under the guise of being a customer, then came behind the counter, removed his pants and molested her.

Two in critical condition after crash in southwestern Lancaster County

The crash occurred just after 11 p.m. near the intersection of Southwest 14th Street and Nebraska 33. Two people are in critical condition.

Officer Luke Bonkiewicz said police saw a Saturn Vue veering into lanes and failing to signal. Officers tracked the vehicle to a parking lot, and the driver admitted to having drugs and brass knuckles in the car.

"And the fact is, as we sit here today, you don't know what would've happened if you had just said 'stop'," defense attorney Mallory Hughes said on cross examination.

Capt. Nancy Crist said the driver of the SUV initially was trapped in the vehicle and then was taken to the hospital, as were three students on the bus.

Doctors have been unable to positively connect the Pfizer vaccine he received Wednesday to the small stroke or rule out a connection, according to his statement.

Reinhold Marxhausen is shown in a May 1994 file photo. The Seward artist died Saturday, April 23, 2011, at age 89. (LJS file)
© Copyright 2021 The Lincoln Journal Star, 926 P Street Lincoln, NE | Terms of Use | Privacy Policy
Powered by BLOX Content Management System from TownNews.com.
You don't have any notifications.