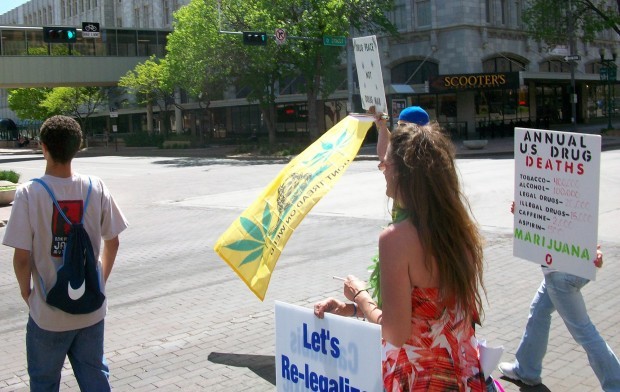 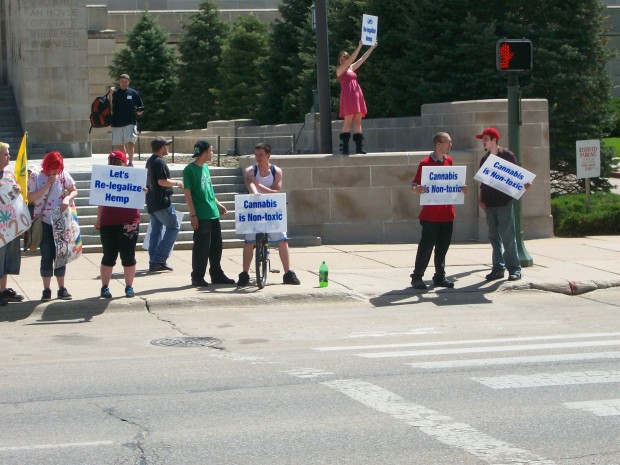 Protesters held signs outside the Capitol Saturday advocating for the legalization of marijuana. The all-afternoon event drew around 30 people to downtown Lincoln and included a march and speeches. Photo by Mitch Smith/Lincoln Journal Star
By MITCH SMITH / Lincoln Journal Star

LittleTree Strongbow has three children. She also has bipolar and post-traumatic stress disorders.

And while the Omaha woman said using heavy pharmaceuticals like Valium to treat those illnesses doesn't allow her to be an effective mother, she believes marijuana does.

So Strongbow showed up in downtown Lincoln on Saturday decked out in a marijuana-themed bandanna and a belt made of artificial cannabis leaves. With a bullhorn in hand, she and about three dozen other proponents paraded around the Capitol and along O Street advocating for legalized marijuana in agriculture and medicine.

Prohibiting it has proved ineffective, she said. When asked how long it would take for someone to find and purchase illegal marijuana in Lincoln, Strongbow estimated about 20 minutes.

Strongbow believes the government is dismissing protesters' arguments because large companies are threatened by the prospect of domestically grown hemp, or agricultural cannabis, entering the marketplace. But she said hemp as a crop could be a boon to Nebraska's economy.

March organizer Diana Wulf agrees. Wulf, who said she also has post-traumatic stress disorder, had a prescription for medical marijuana when she lived in Colorado. Medical marijuana is now legal in 15 states and Washington, D.C., but not in Nebraska.

Wulf, who lives in Staplehurst, said she leaned on marijuana when she stopped using methamphetamine several years ago. She said pot helps her stay away from harder drugs and alcohol.

A former hog farmer, Wulf also sees potential for hemp in agriculture. If legalized in Nebraska, she said, agriculturally produced hemp could help farmers recovering from recent shifts in food production. Hemp can be used to help make clothing, bricks and myriad other items, but it cannot be grown commercially in the United States. Wulf said practical uses of cannabis are often overlooked by its opponents.

"It's not about getting high," she said. "It's about industry. It's about medicine."

Others contend marijuana is a dangerous drug, and say claims of medical benefits are fabricated or exaggerated. The Controlled Substances Act classifies the drug as an unsafe and potentially addictive substance, and the Drug Enforcement Administration says medical marijuana is "a fallacy."

Rumi Miller disagrees. Miller, 20, has been using marijuana since her 14th birthday. She joined the march Saturday because she hoped to spread awareness and dispel what she sees as common misconceptions about the drug. Miller said she has bipolar disorder, and marijuana helps her cope with the disease's symptoms.

"It helps me stay focused and calm," she said. "Today I haven't smoked at all and I feel all jittery."

The fight seemed to be prompted by the social media platform that has recently inspired teens across the country — and in Lincoln — to perform "devious licks" by vandalizing school bathrooms and stealing school property.

Deputies released the video — which shows at least two separate aggressors who appear to be repeatedly punching and kicking a girl who is on the ground — in an effort to identify the attackers.

"Why should he have the privilege of feeling free and safe when I have to spend the rest of my life checking over my shoulder?" the 17-year-old told the judge in asking for the maximum sentence.

Several authors withdrew from the Seward event after an author pointed to Concordia University's student code of conduct, which deems an "active involvement in a homosexual lifestyle" inappropriate.

The first tagging, targeting the Husker Legacy Statue on the east side of the stadium, yielded around $2,000 in damage after vandals sprayed several smiley faces in white paint on the backs of the football players depicted.

Advocates had raised $10,960 by selling "kNOw More" T-shirts in the wake of an alleged sexual assault at a UNL fraternity house, but organizers of the fundraiser were defrauded by someone posing as a member of a Lincoln nonprofit.

33-year-old Adam Schutte made his first appearance in Lancaster County Court on Tuesday, two days after sheriff's deputies and Raymond Fire and Rescue crews responded to his house near Waverly Road and U.S. 77.

The teenage driver was cited for violating a traffic signal, according to police. The 10-year-old has bruises, abrasions and a possible broken arm.

Norma LeRoy tries to understand why a school secretary cut her two little girls’ hair without her consent in the spring of 2020. The secretary was checking for lice, LeRoy was told — lice the mother said they never found.

“Our staff and students need this opportunity to mentally and physically reset," she said.

Protesters held signs outside the Capitol Saturday advocating for the legalization of marijuana. The all-afternoon event drew around 30 people to downtown Lincoln and included a march and speeches. Photo by Mitch Smith/Lincoln Journal Star
© Copyright 2021 The Lincoln Journal Star, PO Box 81869 Lincoln, NE | Terms of Use | Privacy Policy
Powered by BLOX Content Management System from TownNews.com.
You don't have any notifications.