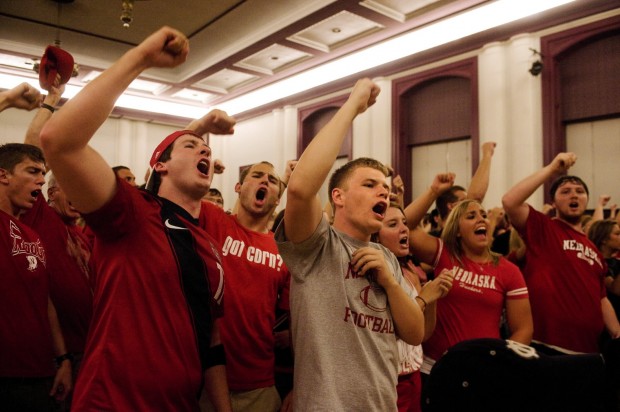 University of Nebraska-Lincoln students rally together at the Take Back Gameday event after a rainfall caused them to relocate to the student union on UNL's campus Friday evening. (BRYNN ANDERSON / Lincoln Journal Star) 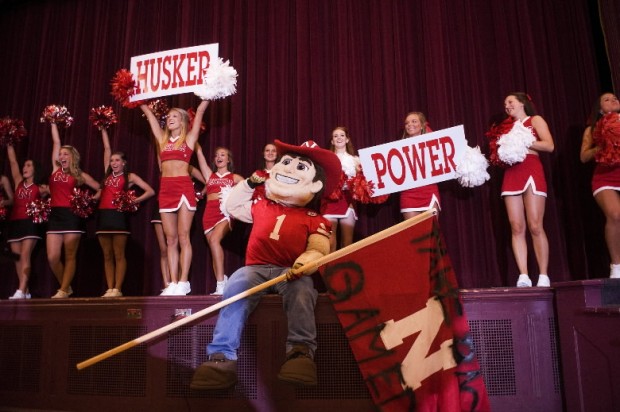 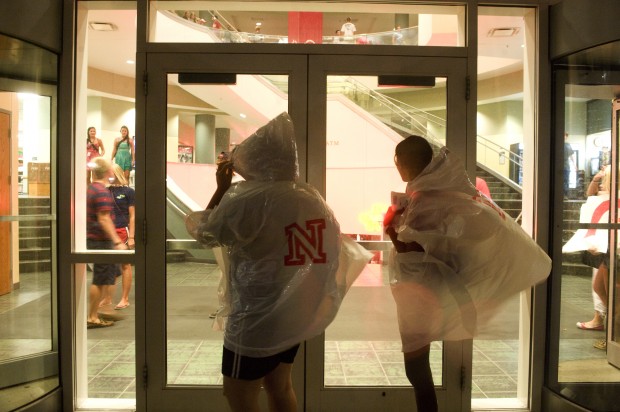 The rain and thunder came on cue -- 15 minutes before University of Nebraska-Lincoln students were supposed to come together for a new student rally, "Take Back Gameday."

It sent about 500 red-clad fans running through torrential storms to make it indoors to the Nebraska Union, but that didn't stop them from making noise.

It only made them louder.

Chants of "Go Big Red" echoed off the walls of a packed upstairs ballroom as soaked college students, the Cornhusker Marching Band, UNL cheerleaders and Herbie Husker came together for the 20-minute Friday night party.

The band played, the cheerleaders led "Husker Power" and Take Back Gameday organizer Jason Dunn told the students why they were there.

"When Big Ten teams come into our stadium, we want them to know who we are," Dunn yelled through a bullhorn. "We can show we have not lost our edge at Memorial (Stadium)."

They introduced a new gameday chant -- "Can't be beat, won't be beat" -- which students will call and return after the third quarter.

"Considering our circumstances, we couldn't be happier," Dunn said. "Ideally, we would've liked to have been outside, but this was still a great atmosphere."

The raucous group of students would cheer for anything. Shouts of "Go Big Red" broke out at random. They even started chanting "band, band, band!" when the marching band entered the room.

"You don't get that at Misty's or Grandmothers," UNL band member Jason Strohbehn said. "There is a lot of passion in this room. A lot of people that you can tell might not know about every tradition but want to learn."

And they did learn -- traditions like singing "Bo Pelini" over "March Grandioso" and the words to the Husker fight song for those who didn't already know them.

Then the new song to accompany the "Can't be beat" chant: AC/DC's "Thunderstruck" will replace "Hey Baby" and features students yelling "Huskers" instead of "Thunder." HuskerVision put together a compilation of lightning and will feature shots of the student section during the song, Dunn said.

He said he loved the chant because it was student-centric.

"It's what the fourth quarter should be about," he said. "It's the crowd feeding our team to finish out the game strong."

Ally Lamb and Jackson Little said they were surprised at the turnout, considering the storm.

"It shows that we don't have fair-weathered fans and we have the dedication to come out and support the Huskers no matter what," UNL senior Little said.

Dunn said those who couldn't make it to Take Back Gameday should come out next week and even those who did should return, because there will be something new every week.

The event takes place at 8:30 p.m. Fridays before home games on the greenspace at the 14th and Vine streets.

University of Nebraska-Lincoln students rally together at the Take Back Gameday event after a rainfall caused them to relocate to the student union on UNL's campus Friday evening. (BRYNN ANDERSON / Lincoln Journal Star)