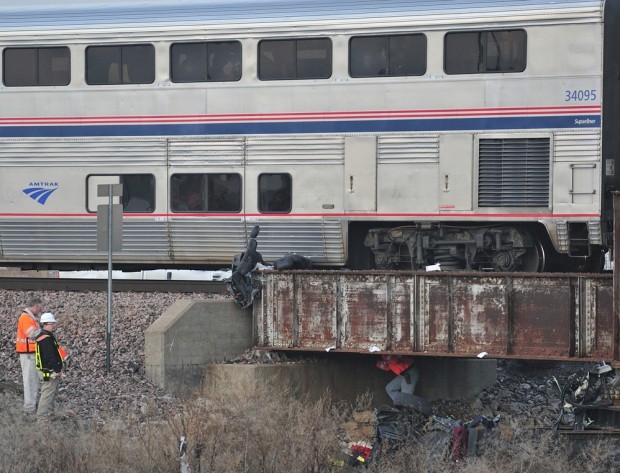 Amtrak passengers watch from windows as rescue personnel and investigators work the scene of a fatal one car-train accident near West A and Folsom streets Thursday morning. Photo is looking west. (TED KIRK / Lincoln Journal Star) 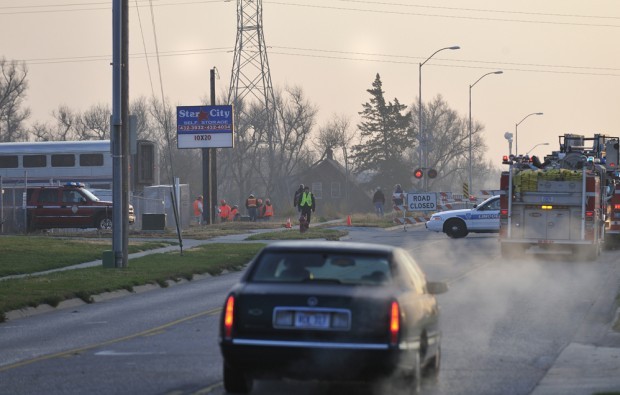 A 42-year-old Lincoln man was killed early Thursday when he tried to drive around railroad crossing arms -- and was struck by a northbound Amtrak.

The lights were flashing and crossing arms down on West A Street near Southwest Sixth Street as the train approached just before 6 a.m., said Officer Katie Flood.

Witnesses said they saw Huy Nguyen drive his black Acura slowly toward the tracks, about two blocks east of Southwest Sixth on West A.

Then, they said, Nguyen drove around one car that was stopped for the train before maneuvering his way around the crossing arms, Flood said.

His Acura was hit immediately by the train.

Nguyen, alone in his car, was dead at the scene, Flood said. No one on the train was injured.

The train was traveling at about 60 mph when the engineer saw Nguyen's car on the tracks, Flood said. The engineer activated its emergency brake, and the train slowed to about 50 mph before it hit the car.

"I wouldn't be able to quantify the frequency, but people go around crossing arms, unfortunately," said Police Capt. Joseph Wright. "And I think a lot of people don't realize how fast the Amtraks go."

Nguyen was on his way to work at Lester Electrical of Nebraska Inc., 625 West A St., Flood said.

West A was closed from Southwest First to South Folsom Street after the crash and reopened shortly before noon, Flood said.

The California Zephyr -- two locomotives and nine cars -- was traveling from the San Francisco Bay area to Chicago, with a planned stop in Lincoln.

About a dozen crew members and 136 passengers were aboard the train, said Amtrak spokesman Marc Magliari. It later left Lincoln at 9:58 a.m.

Magliari said he believed the train had a camera and Amtrak officials would give the footage to police.

Amtrak employees directly involved in tragedies such as this are allowed time off as part of a compassionate relief support program, Magliari said.

"These kinds of incidents are always tragic and avoidable by drivers ... who heed the warning of approaching trains," he said.

Amtrak passengers watch from windows as rescue personnel and investigators work the scene of a fatal one car-train accident near West A and Folsom streets Thursday morning. Photo is looking west. (TED KIRK / Lincoln Journal Star)

Rescue personnel and investigators at the scene of a fatal one car-train accident near West A and Folsom streets Thursday morning. Photo is looking east on West A Street. (TED KIRK / Lincoln Journal Star)
© Copyright 2021 The Lincoln Journal Star, PO Box 81869 Lincoln, NE | Terms of Use | Privacy Policy
Powered by BLOX Content Management System from TownNews.com.
You don't have any notifications.