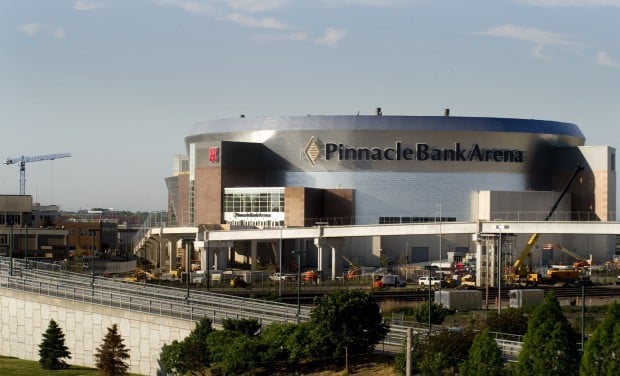 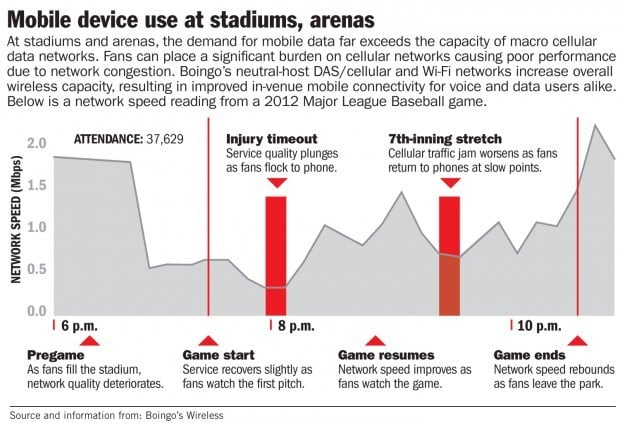 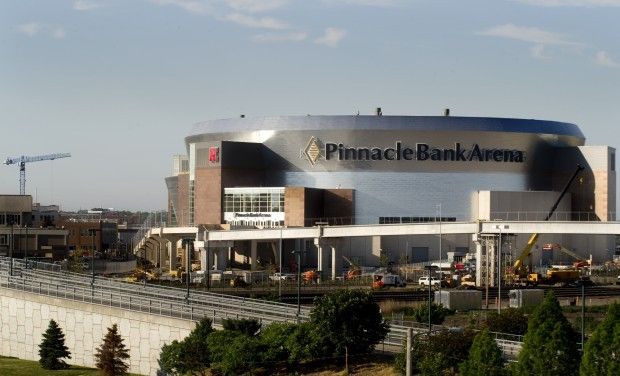 This file photo from July 26, 2013 shows the exterior of the Pinnacle Bank Arena in Lincoln's Haymarket district. Besides Pinnacle Bank, several other companies are vying to get their brands displayed prominently throughout the structure.

Imagine the mother of all overwhelmed roundabouts — but carrying electronic voice signals, data and images, not cars.

Stuff is coming in from all directions while just as much stuff is trying to exit from a single little electronic carousel.

It's not long before things crackle to a halt.

That's an illustration, however dim, of what smartphones, in just the past few years, have done in places where thousands of people gather.

Wireless digital information jams in arenas and stadiums and other public places arose with new technology as video, data and photos joined text and voice exploding into the ether from phones and, increasingly, tablet computers.

The cellular carriers and venue managers were being chewed alive by dissatisfied customers for insufficient bandwidth in places where lots of people using smartphones and tablets congregate.

After complaints from customers at Memorial Stadium, for example, Verizon Wireless installed portable cellular antennae two years ago, just to handle the traffic there, then last year, it built its own distributed antenna system, an array of small antennae to handle concentrated traffic in a small area.

Hell hath few furies like that of a jacked-up fan with a dropped call, an incomplete upload or an inaccessible score. The typical smartphone has the equivalent drain, on average, of 10 cellphone calls on a stadium's system, according to one industry estimate.

So you might imagine the potential unhappiness lurking in the future of an otherwise shiny new entertainment and sports arena, say, in Lincoln, Nebraska.

That's where the Joint Public Agency brought in Boingo Wireless of Los Angeles.

Boingo is designing and will deploy and manage a neutral-host, multicarrier distributed antenna system, DAS, providing mobile voice and data coverage throughout the 15,300-seat Pinnacle Bank Arena. It'll be ready for the opening, Boingo says.

So anyone attending a concert or game at the arena can count on uninterrupted wireless service inside, assuming their wireless carrier signs on.

Verizon Wireless, with the biggest share of customers in the state, acknowledged it's on board to participate. Others are expected.

Boingo operates all kinds of paid Wi-Fi sites from shops to airports, but Pinnacle Bank Arena's DAS will be free to the user. Boingo also has more than a 100 "hot spots" in Lincoln through its roaming agreements.

The cellular carriers will be paying more or less to make sure their customers get all of the bandwidth they need inside the arena.  Those deals are under discussion and not yet done. The Joint Public Agency that runs the arena will get 40 percent of the gross revenue.

"The number I think we are using is a minimum of $10,000 annually per carrier," Dan Marvin, the city's arena project coordinator, said in an email. "If they can get several carriers — AT&T and Verizon are the two most frequently mentioned — we should get the minimum with some upside. We are not modeling any revenue from this at the moment."

The University of Nebraska, the city of Lincoln and SMG, which manages the arena, clearly grasped the opportunities and threats from what Doug Lodder, Boingo's vice president for business development, called the "insatiable demand for mobile data."

Tom Lorenz, general manager of SMG Lincoln, said  recent meetings with Big Ten executives reinforced his belief in the wisdom of installing DAS and Wi-Fi in the arena.

His experience at the Bob Devaney Center is that you can't get out on your smartphone even to check other scores.

"The same thing happens at Memorial Stadium," Lorenz said. "I know they did some (DAS) improvements, but when half or more of the people are pulling out their phones … it just absolutely jams the system. There are flashes of connectivity … but it's still not there. We knew all along we'd need a neutral-host DAS system."

Smartphones changed everything, Lodder said in an interview, describing the necessity for DAS at public venues and marketplaces. Now 60 percent of  cellphones are smart, with all of the demands for voice, data, pictures and video that implies.

"Three years ago, it was just about making a phone call," he said. "Now people are checking Facebook, checking scores, streaming video, you name it, browsing You Tube. … Half of these people are trying to upload a photo at once."

As an event proceeds, the demand for bandwidth rises and falls with the activity, or lack thereof. At the seventh-inning stretch of a Major League Baseball game, for example, congestion can get pretty high, Lodder said.

"It's just a matter of the pipes not being big enough," he said. "The surrounding cell towers are adequate for coverage but not capacity."

Instead of allowing a couple of large cell towers to be overwhelmed, the idea is to put in small antennae — more than 300 in the case of Pinnacle Bank Arena — so each one has only a few hundred people using it.

The DAS will cost $2 million to $3 million to build and will be a very robust design, Lodder said.

This is a rapidly changing business, and because of the amounts of data being consumed, Boingo is upgrading and doubling the capacity of its Soldier Field DAS.

A power failure helped make a hash of the 2013 Super Bowl's wireless performance.   But, as Boingo's O'Neill pointed out, the 2012 Super Bowl in Indianapolis was widely reported to have good connectivity and, at the time, the highest data usage ever seen at a single sporting event.

CNET documented how it got done: AT&T spent nearly a year upgrading the network and brought in temporary solutions to make the network work — such as cell-on-wheels, otherwise known as COWs, basically a DAS on wheels.

Given the acceleration of data volume used, it may not be long before they'll have to think about upgrading the DAS at Pinnacle Bank Arena, and it's not even done yet.

In any case, the DAS footprint at the arena is confined to the building, so if you're elsewhere in the Haymarket, you and your smartphone are on your own with your carrier and its bandwidth.

Is there really more paranormal activity in fall?

Even as arena opens, West Haymarket will be work in progress

A look at when related development and infrastructure will open.

This file photo from July 26, 2013 shows the exterior of the Pinnacle Bank Arena in Lincoln's Haymarket district. Besides Pinnacle Bank, several other companies are vying to get their brands displayed prominently throughout the structure.