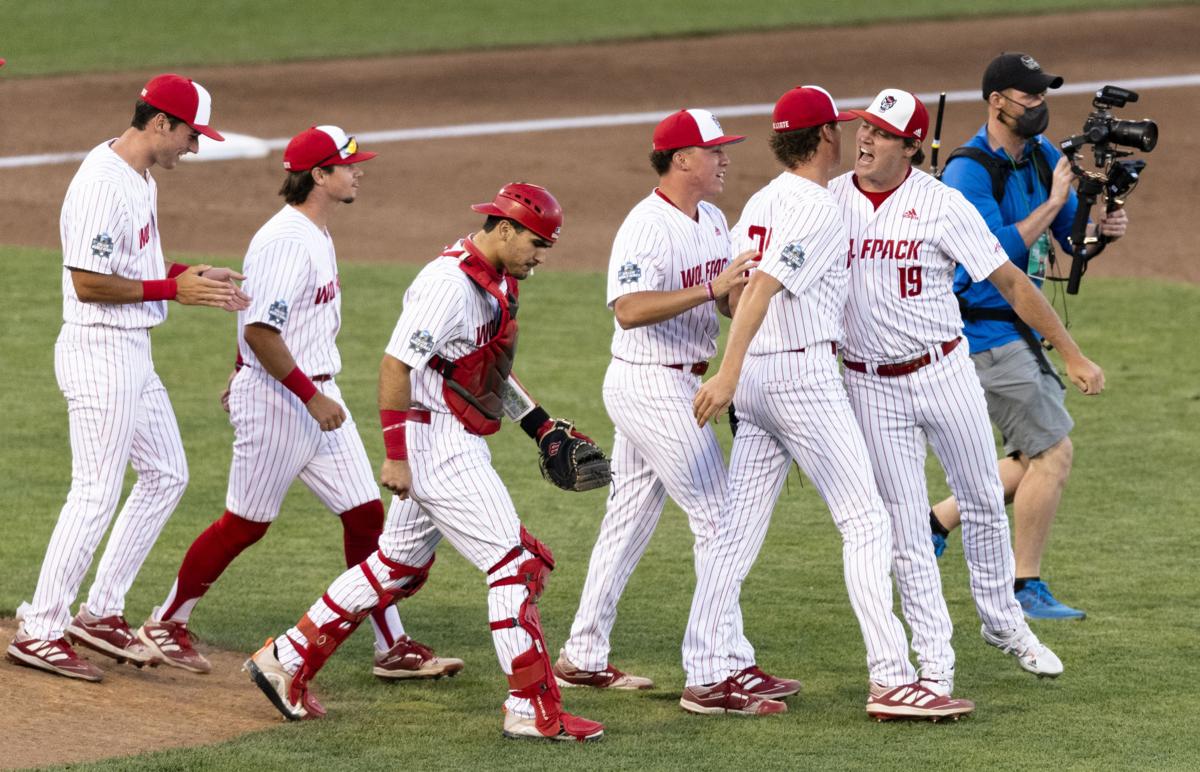 N.C. State celebrates its 1-0 win over Vanderbilt in a College World Series game Monday at TD Ameritrade Park in Omaha. 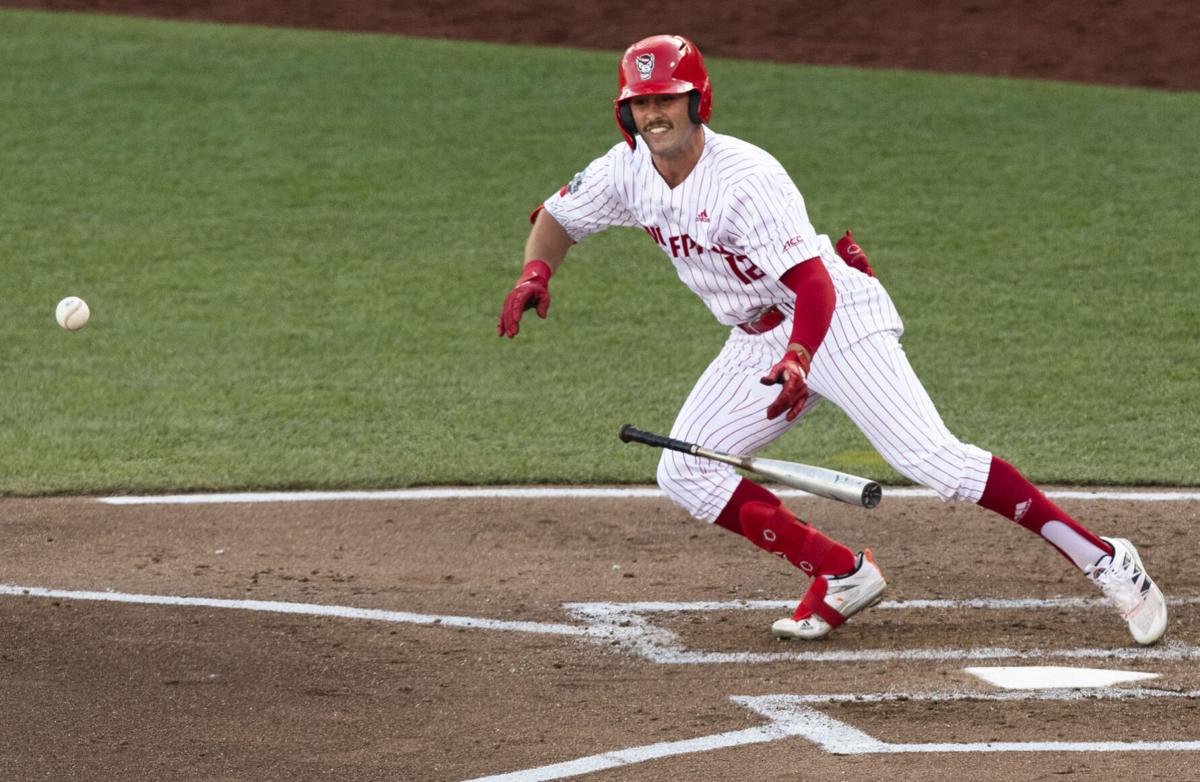 North Carolina State's Austin Murr bunts against Vanderbilt during a game at the College World Series on Monday, June 21, at TD Ameritrade Park in Omaha. 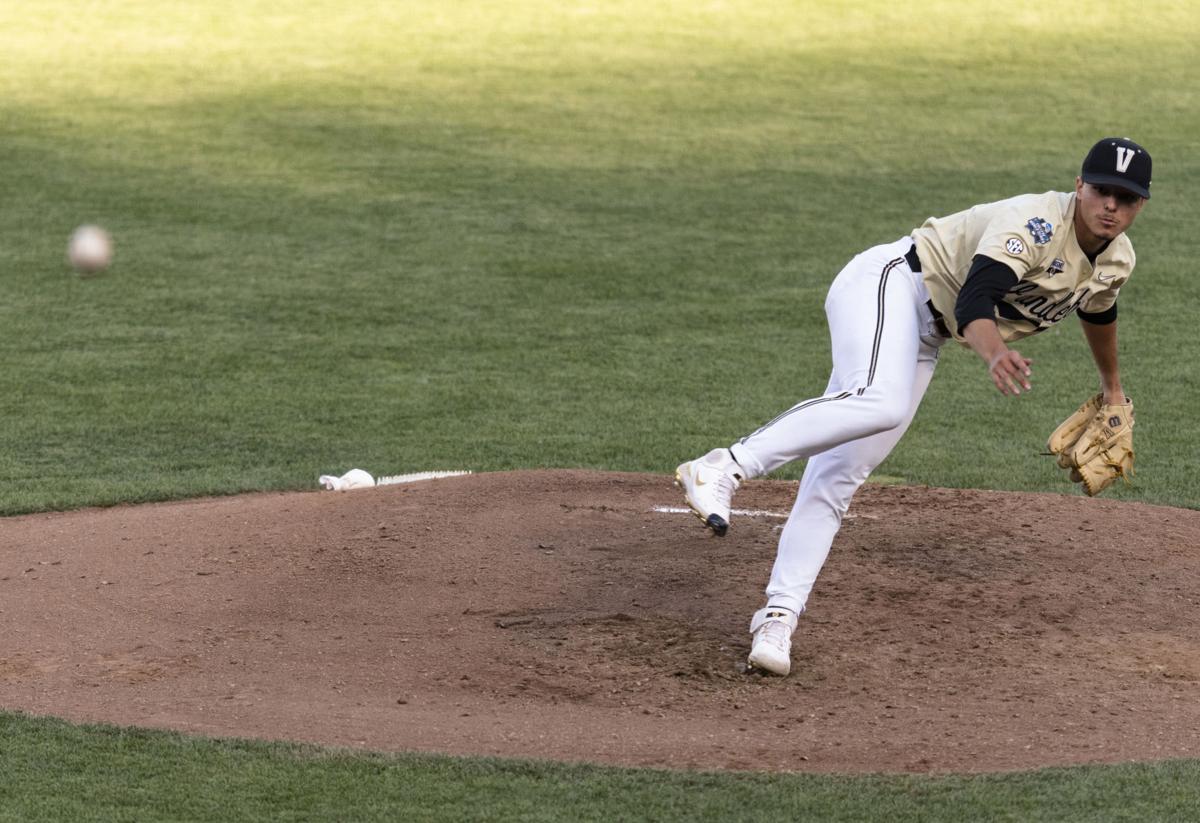 OMAHA — With no schools in this year’s College World Series field outside of college baseball’s power conferences (the SEC, ACC, Pac-12 and Big 12), it remained to be seen which team would capture the CWS spirit and embark on a magical postseason run.

For four innings, Vanderbilt’s Jack Leiter was untouchable. The Vanderbilt ace and projected top-10 pick in the MLB Draft struck out nine of the first 12 batters he faced and took a no-hitter into the bottom of the fifth inning.

NC State hitters had been struggling to catch up to Leiter’s 94 mph heater all night long, until one well-timed swing from designated hitter Terrell Tatum changed everything. After seeing a steady diet of breaking balls in his first trip to the plate, Tatum went hunting for a fastball that he didn’t miss.

He teed off on a fastball, sending it 15 rows deep into the right-field bleachers for NC State’s first hit of the game, a solo home run. An equally impressive pitching performance from Sam Highfill and Evan Justice meant the one run was all it took for NC State to defeat Vanderbilt 1-0 at TD Ameritrade Park on Monday.

“I was really hoping that he would start me off with (a fastball), but it ended up being a slider, so I took it,” Tatum said. “And then I just had this feeling that it was going to be a fastball, and I didn't care where it was thrown, I was going for it."

Throughout its postseason journey, NC State (37-18) has been an underdog against national seeds, but it has stepped up to the challenge. No. 4 Vanderbilt (46-16) joins No. 16 Louisiana Tech, No. 1 Arkansas and No. 9 Stanford as the latest team to come up short against the Wolfpack.

“We've got a lot of confidence; we've slayed a lot of giants and (we’re trying) to carry it forward,” Highfill said.

Balls were flying out of TD Ameritrade Park in CWS. Then, Mississippi State and Texas played

After Mississippi State set a CWS record with 21 team strikeouts against Texas on Sunday night, Vanderbilt and NC State delivered another electric pitchers' duel. Leiter, the son of former MLB pitcher Al Leiter, threw all eight innings for Vanderbilt and finished with 15 strikeouts.

But, with the thin margins of postseason baseball, a single misplaced pitch is all it took for him to walk away with a loss.

“I guess you could say that every pitch matters,” Leiter said. “One mistake, I knew he was a good fastball hitter, particularly on fastballs in, so CJ set up away. The ball was middle-in and he hit it a long way and kind of made me pay for it. So, yeah, every pitch matters.”

Meanwhile, Highfill came into the game unbeaten in his last nine starts, and the freshman showed his stuff on the biggest stage of the college baseball season. He allowed just two hits and two walks while striking out seven batters in 7 1/3 innings of work before handing over the game ball to experienced left-hander Evan Justice.

Justice stranded a runner on third base with a strikeout to finish the eighth inning, and he fittingly ended the game with another punch-out to secure a combined two-hitter for the Wolfpack.

“I knew I was going to have to be good tonight,” Highfill said. “That kid's really good and you'll see his name called if not in the first five (or) 10 picks, he might be the first pitcher taken this year.”

Vanderbilt has been an Omaha mainstay over the past decade, with finals appearances in 2014, 2015 and 2019. In each of those three trips, Vanderbilt started its title run 2-0 in the winner’s bracket. That won’t be the case this time around.

As for what went wrong for the Commodores tonight?

“Just never got to the barrel, just didn't have any base runners,” Vanderbilt coach Tim Corbin said. “That's it.”

NC State is now off to the school’s best-ever start at the CWS. In its two previous trips to Omaha in 1968 and 2013, NC State won its opening-round matchup before dropping two straight games and falling out of the tournament.

Either Vanderbilt or Stanford would need two consecutive wins against NC State to make the CWS Finals, meaning the Wolfpack have a decisive upper hand in terms of championship hopes.

“Everybody knows we don’t have a deep, deep bullpen and we’ve battled that all year,” NC State head coach Elliott Avent said. “To go in that loser’s bracket would have been tough for us, so the main thing is to rest right now.”

Logan Michaels, the light-hitting catcher for Virginia homered for the first time this season to spark the Cavaliers in Omaha.

'It was really weird not being here': NC State downs Stanford to open CWS as fans relish return to ballpark

The gloomy days of 2021 seemed far away as the College World Series made a triumphant return to TD Ameritrade Park on a sunny Saturday.

What's it like to umpire the CWS? Making his eighth appearance, Lincoln native Henrichs still has 'that fire in the belly'

Henrichs is no rookie to the CWS' umpiring crew. Even still, "it does make it special" when that call arrives on the third Monday of May.

After being no-hit for 7 innings, Mississippi State breaks through to stun Virginia

After being shut out for most of the game, a pair of eighth-inning home runs allowed the Bulldogs to overcome a stellar pitching effort.

Bulldogs, Longhorns, Wildcats and a Wolfpack are among the teams at this year's College World Series. Unfortunately for CWS officials, there also have been raccoons.

Raccoons, walk-offs and Cinderella: 3 winners through 5 days of the College World Series

From furry creatures in the ballpark's ceilings to walk-off wild pitches to Vanderbilt's "whistlers," here are three "winners" from the CWS.

N.C. State celebrates its 1-0 win over Vanderbilt in a College World Series game Monday at TD Ameritrade Park in Omaha.

North Carolina State's Austin Murr bunts against Vanderbilt during a game at the College World Series on Monday, June 21, at TD Ameritrade Park in Omaha.