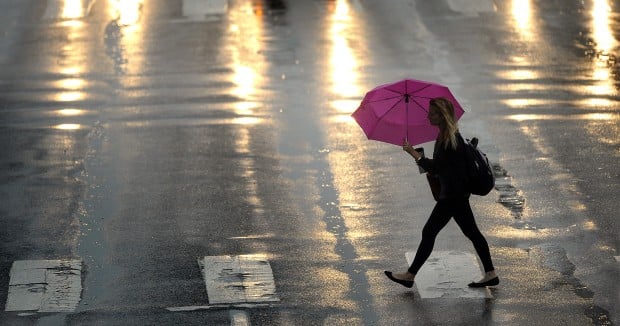 A woman crosses 10th Street downtown the morning of June 24 during a thunderstorm.

Southeast Nebraska could find itself back in drought territory if significant rain doesn't fall in the next two weeks, a climatologist said Thursday.

"The area is very vulnerable," said Brian Fuchs with the National Drought Mitigation Center at the University of Nebraska-Lincoln.

Parts of the region emerged from severe drought conditions in April in time for spring planting, and frequent thunderstorms and relatively mild temperatures kept the area out of the drought that still has a grip on most of central and western Nebraska.

But except for some spotty thunderstorms, much of Southeast Nebraska hasn't had significant rainfall yet this month. Soil is beginning to crack, and lawns are turning brown.

In Lincoln, no measurable rain has fallen since June 27, according to the National Weather Service in Valley.

Still, at 18.34 inches for the year, its precipitation total is 2.47 inches above normal, weather service meteorolgist Becky Kern said.

The forecast for the next seven days shows no rain in sight, she said. Temperatures are expected to climb into the mid-90s by the weekend and cool down slightly next week.

Last year, the rain stopped in late June and temperatures stayed in the 90- to 100-degree range for July and August, causing what experts called a "flash" drought. Nebraska recorded its hottest year on record in 2012.

Fuchs said there is no comparison between last year and this year. He explained that in 2012, there was no drought until mid-summer.

This year, precipitation over much of the state simply hasn't been enough to overcome the dry conditions that set in a year ago.

In those areas, "we never got rid of the drought," Fuchs said.

Fortunately, Fuchs said, the state has not had long periods of hot temperatures like last summer, but conditions need to improve.

"We need to get through this dry spell," he said.

Michael Hayes, director of the National Drought Mitigation Center, said corn is entering a critical time and long periods of hot weather could cause damage, especially to dryland corn.

"If it were to get really hot that could be a real danger," he said.

"I don't think the expectation is, at this point, that we will see extremely hot temperatures like last year," he said.

A woman crosses 10th Street downtown the morning of June 24 during a thunderstorm.