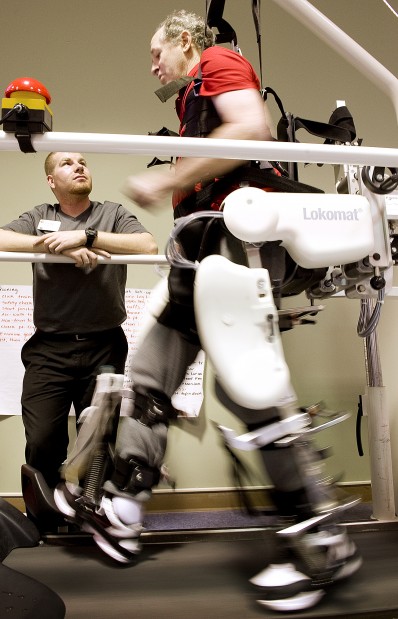 With therapy aide Casey Seay watching, Jim Unger -- the longtime gymnastics coach paralyzed in a bicycle accident last year -- uses Madonna Rehabilitation Hospital's Lokomat, a high-tech treadmill that supports most of his weight and helps him use his legs again. 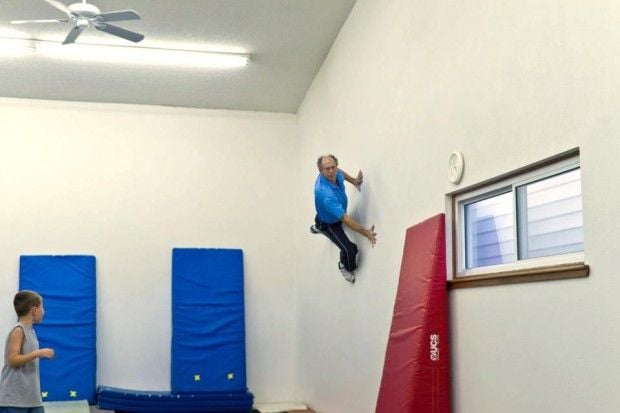 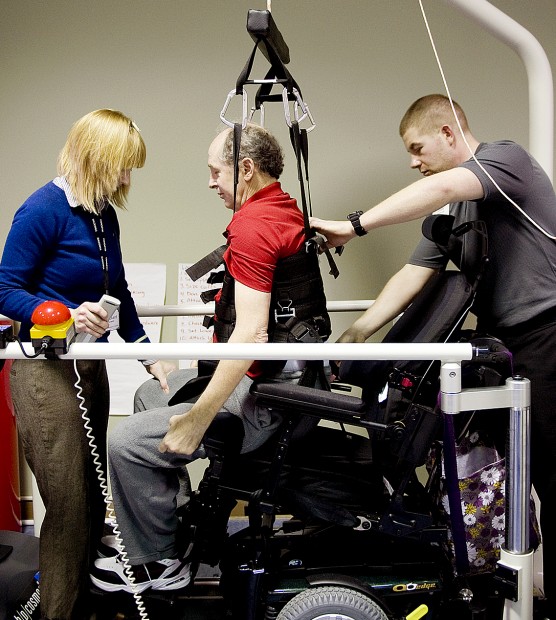 "Ready to go airborne," Jim Unger says as he's hoisted out of his wheelchair by Madonna Rehabilitation Hospital physical therapist Sara Lockard (left) and aide Casey Seay. The two were preparing Unger for the Lokomat, which supports most of his weight and helps him use his legs again. 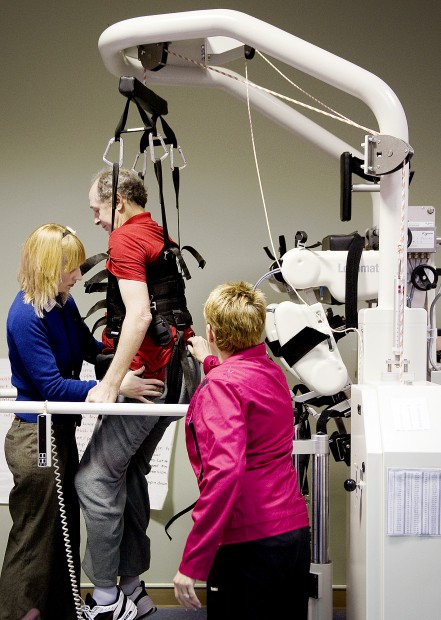 Physical therapist Sara Lockard (left) and Shannon Unger (right) check the harness securing Jim Unger into the Lokomat, which supports his weight and helps him use his legs again, at Madonna Rehabilitation Hospital. Unger was paralyzed in a bicycle accident last year. 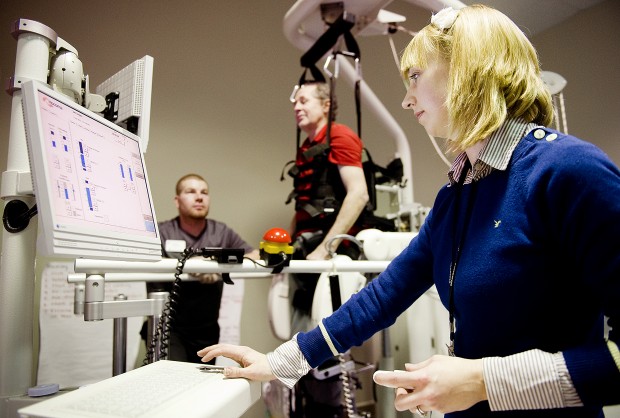 And bound. And balance. And catapult his body to a state high school championship, All-American honors and a career coaching thousands of young gymnasts.

The second time, he learned to walk on air -- harnessed and hoisted, dangling inches above a high-tech treadmill and trying to recall what it felt like when he could put one foot in front of the other.

Then a physical therapist lowered him and his Nikes to the treadmill’s track. A pair of robotic legs -- cradling his own -- did most of the work and carried much of his weight.

“I think I knew how to do this a long time ago.”

Six months ago, on Aug. 10, Unger was coasting -- on his bicycle, headed downhill to get his gymnastics school ready for fall classes. He and his wife, Shannon, had returned that day from scouting retirement homes in Phoenix. He had played a round of golf and planned to play in a tournament in the morning.

But then he was in the air, pitched off his bike by potholes on the downhill stretch of 56th Street between Pine Lake and Old Cheney roads, hitting the ditch, hitting his head, snapping his neck back.

“We’d told our kids not to ride their bikes on 56th Street,” Shannon said more than six months later. “It’s not a good stretch of roadway. But stuff happens.”

This happens: The impact smashed the bones around his eye, carved up his face and stretched his spinal cord so tight over his vertebrae -- picture a string pulled over a fulcrum, a doctor said -- that he was told he would never walk again.

And that was just the accident.

Since then, Jim and Shannon have had to change how, even where, they live. They have discovered friends they didn’t know existed, support they didn’t expect. They found hope in the smallest symbols -- a wiggling toe, a widened hallway, random acts of cash.

They embraced their faith but came close to testing it.

“I have my days,” Shannon said. “There are so many times I thought: Why is this happening to me? What did I do to deserve this?”

But then she sees Jim refusing to give up. Two-a-week rehab sessions, sometimes two a day, on the Lokomat treadmill and in the pool. Visits to a chiropractor and an acupuncturist.

He tells doctors he’ll walk again. They look at their shoes, she said. He looks them in the eye.

At night, she feels him rolling from side to side in bed beside her, exercising.

“I keep waiting for him to say, ‘I just can’t do this, this is too hard,’ but never. It makes it easier to be around him, because he’s so positive about it.”

Jim majored in physical education. He knows his muscles. He has tracked their return. In August and September, just after the crash, he'd feel little spots of sensation, awakenings.

October, November, weeks of nothing. Then his forearms -- “all mush” -- woke up suddenly. And his quads are coming back. He can contract his muscles, and he can feel them, beneath his skin, even if others can't see it.

Then, last month, he and Shannon were watching “This is 40,” and he moved his feet a quarter-inch, toes first, then heel. He did it again and again.

“I was so excited,” he said. “That was the first time I could move my foot.”

Shannon: “We had to stop the movie.”

He can raise his arms over his head. He can stand in the pool if he holds the edge. He can lean over in his wheelchair and then right himself without spilling out. The right side of his torso is the last large dead zone.

“I can feel momentum going. All the pieces are coming together. It’s not going to be walking. I’m going to be running.”

But there were practical matters. Business to take care of. Jim insisted they keep their longtime gym -- Jim Unger’s Gymnastics -- open in his absence.

Shannon had doubts; Jim had personally taught every student.

“My first thought after the accident was, ‘Oh, no. We can’t do that without him.’ I said, ‘We’re probably going to have to sell. And Jim said, ‘Absolutely not.’”

Jim hasn’t been back yet. It wouldn’t be fair to see some kids and not others. Plus, he’s a stickler for his equipment -- he wouldn’t want his 350-pound wheelchair trampling the gym mats.

"I have this feeling that when I come back, I want to come back permanently."

Their bills, and their needs, mounted. A van to carry his wheelchair and a house he could navigate. Their own insurance paid the hospital but wouldn’t cover all of the looming rehab costs.

Shannon feared losing everything they had saved, and what they believed in.

“We thought we were going to have to get a divorce so we’d have something left,” she said. “As highly religious as we are, my thing was our marriage vows: Do we let those go over money, or do we do the right thing and whatever happens happens?”

They found solutions. A lawyer from their church pointed them toward a spousal impoverishment clause, which protected some of her assets but allowed Jim to qualify for Medicaid benefits.

Their new home has wide hallways, a basement with a roll-in shower. A friend put up the money so their daughter could buy their old house.

All of this allowing Jim to keep searching for his old self.

“He said this is the tough part. Anything he’s wanted to do — if he wanted to be a scratch golfer -- he just worked a little harder. This is one of the first things physically he hasn’t been able to do.”

The accident took something from Jim Unger. But it gave, too. He has a stronger belief in God; he might not be so quick to skip church to play a round of golf.

And he has a new perspective. He talked about it Thursday at Madonna, surrounded by dozens of others trying to reclaim their former lives.

“Being on this side of the handicapped parking is a whole new deal. I’ve had to picture myself: What was I like before? Did I have eye contact with those on crutches and in wheelchairs? Or did I turn my eyes away?”

Mark Doak, who played offensive tackle for the Huskers -- and was drafted by the Redskins and played for the Broncos -- wheeled himself over. He’s recovering from a stroke.

Mark and Jim were classmates in the early 1970s, athletes.

Here they are now, catching up in a rehab hospital.

“Jim hasn’t changed. I haven’t changed. The fact of the matter is, we’re just dealing with a few more problems.”

Doak had his own work to do. But he sat for a while, watching his friend on the treadmill. He swallowed hard, nearly choked up.

“He’s not crawling in a hole. Because of his personality and attitude, he may make a full recovery. If he doesn’t, no stone will go unturned in his attempt.”

At the end of the session, the Lokomat treadmill helped Jim walk 705 meters. His legs supported nearly half of his body weight. The robotic legs did 90 percent of his forward movement.

As he rolled out of Madonna in his motorized wheelchair, he spotted one of his pastors.

“The prayers are all working,” he told her. “I’ll let you know when I’m ready to walk into church.”

The man who taught thousands of children to fly -- and to vault, to tumble and spin -- is trying to teach himself how to walk again.

The gymnast who couldn’t get back up

Jim Unger went off the road and over the handlebars near the bottom of the hill, his face slamming a tree and his neck snapping back, stretching his spinal cord. And silencing the legs that had propelled him for years.

Jim Unger is out of bed, rolling around the rehab hospital in his motorized wheelchair.

Unger, a longtime gymnastics teacher, was severely injured in a bicycle accident in August.

With therapy aide Casey Seay watching, Jim Unger -- the longtime gymnastics coach paralyzed in a bicycle accident last year -- uses Madonna Rehabilitation Hospital's Lokomat, a high-tech treadmill that supports most of his weight and helps him use his legs again.

"Ready to go airborne," Jim Unger says as he's hoisted out of his wheelchair by Madonna Rehabilitation Hospital physical therapist Sara Lockard (left) and aide Casey Seay. The two were preparing Unger for the Lokomat, which supports most of his weight and helps him use his legs again.

Physical therapist Sara Lockard (left) and Shannon Unger (right) check the harness securing Jim Unger into the Lokomat, which supports his weight and helps him use his legs again, at Madonna Rehabilitation Hospital. Unger was paralyzed in a bicycle accident last year.