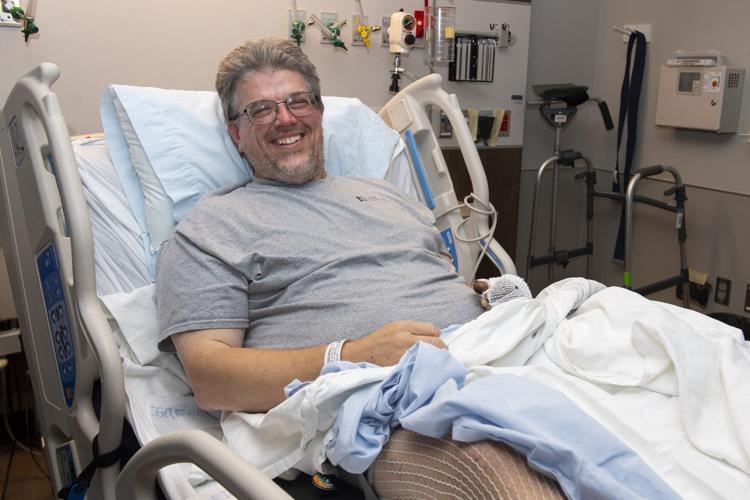 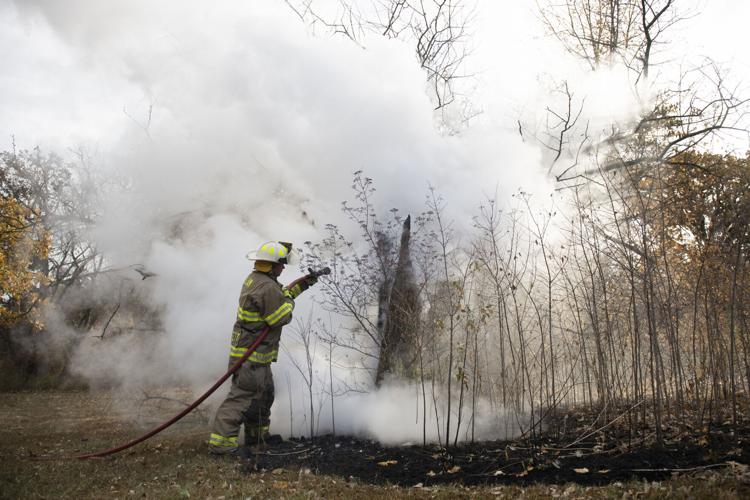 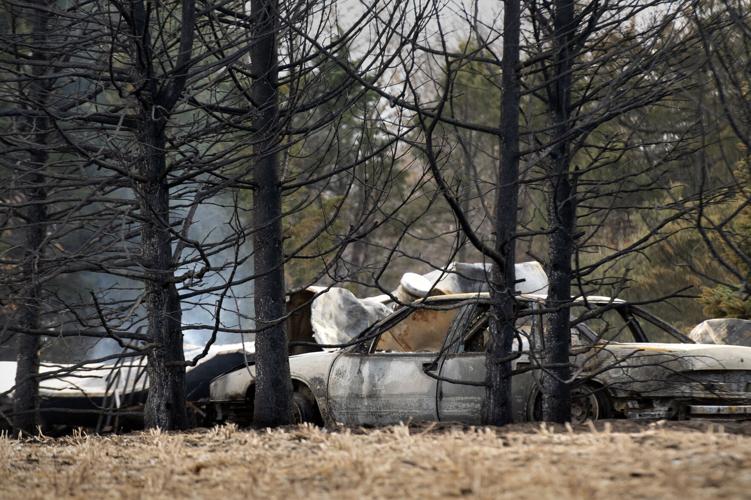 As a wind-whipped wall of fire consumed him, Brad Elder quickly came to terms with the reality he stared down.

"My head started wrapping around, like, 'OK, I'm gonna die here,'" Elder recalled from his room at Madonna Rehabilitation Hospital in Lincoln, less than a month after he'd come to terms with his own death in a field in southwestern Lancaster County.

A 54-year-old firefighter with the Crete Volunteer Fire Department armed with 30 years of prescribed land burning experience, Elder was one of hundreds of first responders dispatched there Oct. 23 as a grass fire burned miles of farmland and destroyed at least three homes.

The fire — fueled by exceptionally dry conditions, unseasonably warm temperatures and a ceaseless wind — had burned with abandon from the northern edge of Gage County and was nearing the Olive Creek State Recreation Area that Sunday afternoon when Elder squared off with the blaze near Southwest 86th Street and West Pella Road.

Elder and another firefighter, Ned Goertzen, had arrived at a house near the intersection in a brush rig with only about 100 gallons of water in its tank as the fire crept closer from the south.

They didn't have enough water to guard the house, which was bordered by a row of pine trees. So Elder headed into a field 30 feet south of the house and took his left glove off as he tried to light a head fire in an effort to save the structure, a tactic sometimes used to burn up all the fuel ahead of a looming wildfire.

Instead, the wildfire jumped the tree line quicker than Elder had anticipated, and he was suddenly consumed by a 1,200-degree blaze that he assumed would kill him.

Elder turned and ran north toward the grass rig, but soon, he was crawling. He had tripped over debris, and now he was inching his way toward a truck he couldn't see, determined not to die, but not convinced his determination would matter.

"When you're crawling through the fire, I was just thinking to myself, 'Is this really happening?'" Elder said.

As Elder grappled with his own mortality, Goertzen used his hose to cut a hole in the flames. He ordered Elder to stand up and the two men — one severely burned — ran toward the pickup.

"Running toward the truck, I didn't think we were gonna make it," Elder said.

But they did. Elder, operating on adrenaline, jumped into the driver's seat as Goertzen leapt into the bed of the truck. He drove north on Southwest 86th Street until he couldn't anymore, switching places with Goertzen, who ferried him to a Lancaster County Sheriff's deputy who had heard their distress call over the emergency radio.

Deputy John Brady was working the day shift for the first time in six months that Sunday. He had started his patrol near Waverly — northeast of Lincoln — but as reports of a fast-moving grass fire emerged from Gage County that afternoon, he had made his way south to help with evacuation efforts.

"When I heard mayday, I honestly had no idea where they were at," he said. "I just kind of went very fast back to where I knew the active fire was."

Brady sped a half-mile to Southwest 86th Street, where, nearly by accident, he encountered Elder and Goertzen.

He got Elder into the back of his cruiser with a paramedic from Crete and drove north, shouting directions into his radio to a Lincoln Fire and Rescue medic unit that met the men at U.S. 77 and Wittstruck Road, where Elder peeled himself off the back seat, stepped out of the cruiser and began to strip.

Soon, he climbed onto a gurney in the back of Medic Unit 6 as paramedics cut the clothes from his body and pumped painkiller into his veins. Elder drifted off and woke up in CHI St. Elizabeth the next day.

"If you look at the number of people involved in trying to save my life, it's — I mean it's just a ton of people," he said, still grappling with the role he played Oct. 23 as a man who needed saving. "It's just staggering."

A professor of biology at Doane University who has spent many of his latest summers fighting malaria in Africa, Elder is not one to sit still.

But now, in the early stages of a recovery that will stretch on for at least another year, that is nearly all he's allowed to do.

So in the aftermath of the two most painful experiences of his life — catching on fire and, later, sitting in a tub for an hour every day for a week as nurses scrubbed the dead skin from his wounds — Elder has spent his days medicated, institutionalized and reflective on that Sunday and its aftermath.

His feelings are mixed.

Elder has maintained a remarkable sense of humor through the daily pain of his wounds. The burns, he said, are not his greatest source of discomfort.

"If all I have to do is a little bit of pain and suffering and walk home, I'll take it," he said.

Instead, it seems to be the notoriety he's least comfortable with.

Elder is used to being an unsung hero, an adrenaline junkie armed with a fire hose. His efforts rarely the subject of headlines.

But in his latest bout with fire, the element won. So he openly scoffs at the notion that his efforts count as heroism.

Elder views himself as a man who gambled and paid the cost, undeserving of the sympathy he's received from his loved ones, the public and a kindergarten class in Crete that sent him "get well soon" cards.

He can recount the moment he caught fire without much sign of emotion. But when he reflects on the aftermath — on the support he's received from total strangers — tears begin to win and his voice breaks.

"That's the part that's hard for me to take," he said. "The burn was easy compared to that, at least in my head. ... You just don't feel like you deserve it."

For three decades, Elder has been someone who helps people. Now, his life saved by a cast of fellow first responders, he's grudgingly learning what it feels like to be helped.

Lincoln man caught with seven guns, three of which were stolen, police say

As emergency personnel arrived in the parking lot, the Lincoln man woke up, saw officers surrounding his vehicle, started the car and began "looking for a path to leave," police allege.

Omaha police have arrested a 22-year-old Omaha man in connection with the shooting of two teens in a downtown parking garage.

The series of thefts kicked off as a seemingly isolated incident Tuesday morning, when a 2007 Volkswagen Jetta was stolen from the mobile home park near North Frist Street and West Belmont Avenue, police said.

The girl told investigators that the 36-year-old had sexually assaulted her more than 10 times, offering her marijuana or alcohol each time.

Two Omaha men who were at party where woman was killed are held on $750,000 bail

Two Omaha men who were shot at a crowded birthday party at a building near 33rd Street and Ames Avenue now face felony charges.

Another motorcyclist died in a similar crash on Rosa Parks Way in June 2014.

A 58-year-old man was sentenced to two years in prison after being found guilty of felony motor vehicle homicide in the 2021 death of a man from Weeping Water.

A 22-year-old Omaha man accused of killing a 20-year-old woman in early November has been charged with first-degree murder and ordered held without bail. 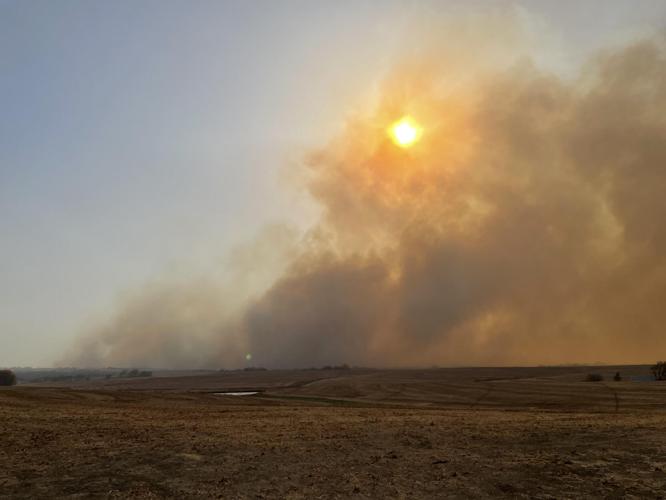 Smoke rises from a grass fire in southwestern Lancaster County on Oct. 23. 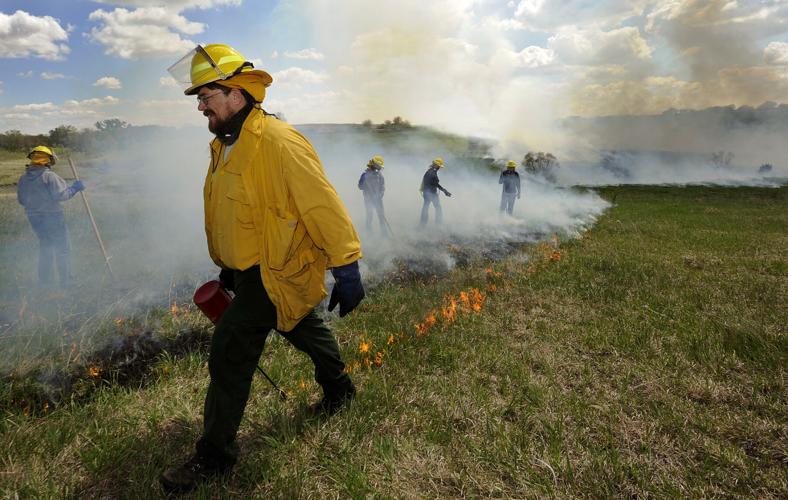 In this photo from 2010, Brad Elder trails a stream of fire as he mans a drip torch during a controlled burn at Audubon Spring Creek Prairie near Denton. Elder, a 30-year veteran of prescribed burns, was injured in October while helping fight a wildfire in southwestern Lancaster County.