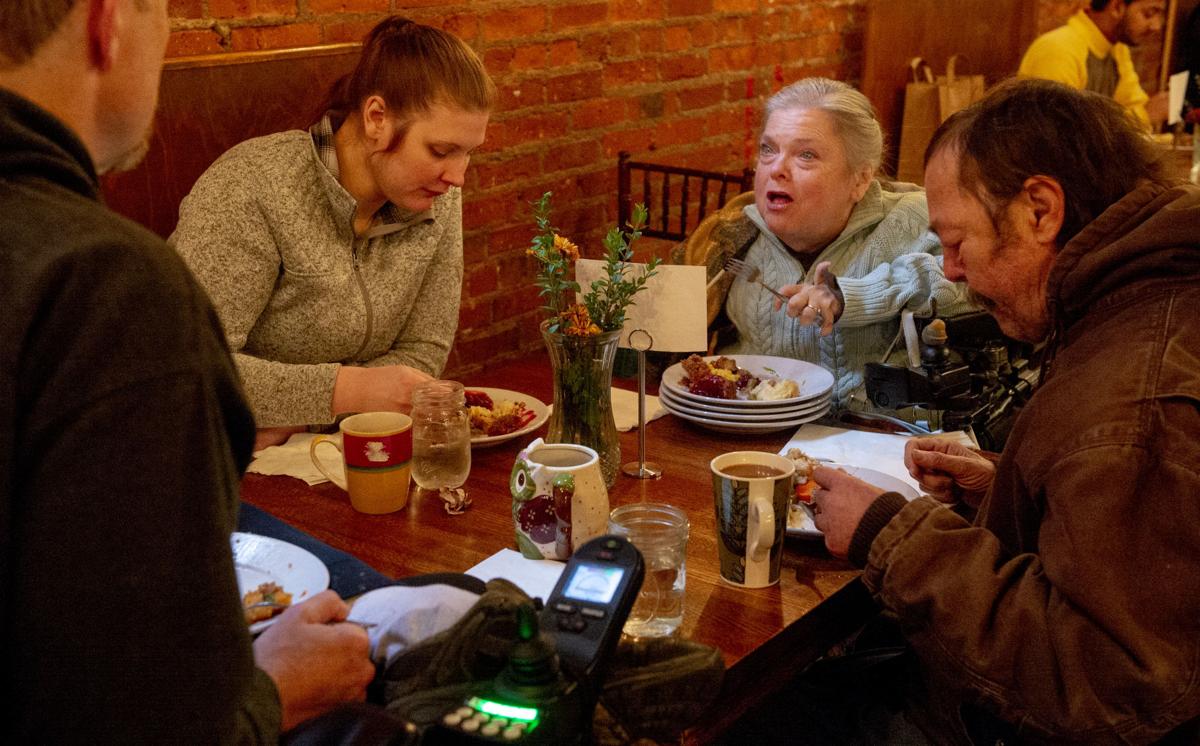 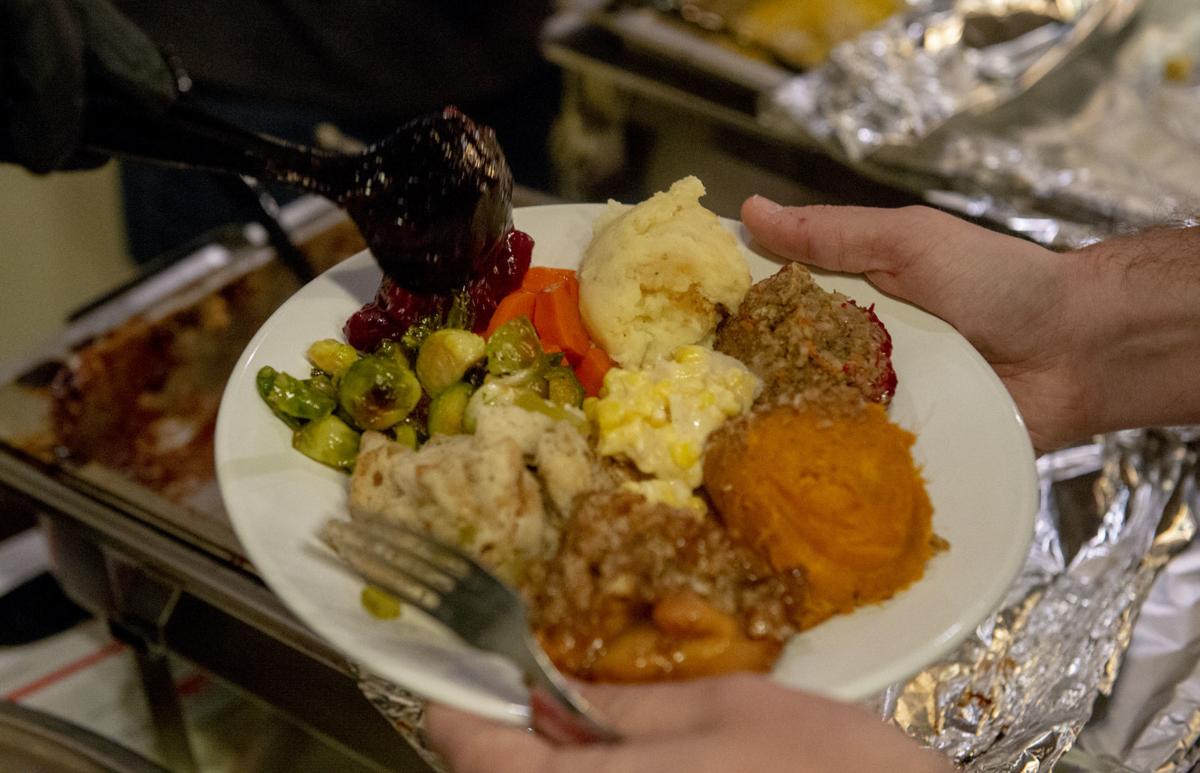 The Friendsgiving dinner at Rutabagas on Thursday featured vegetarian dishes. 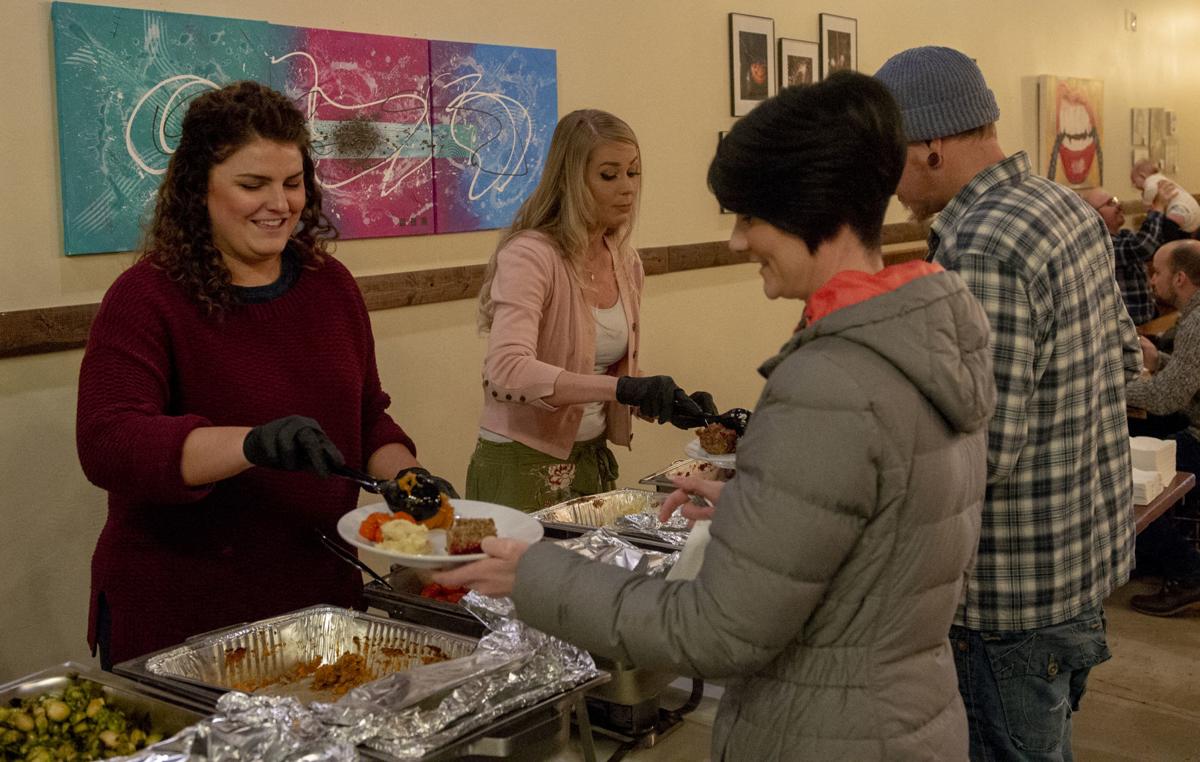 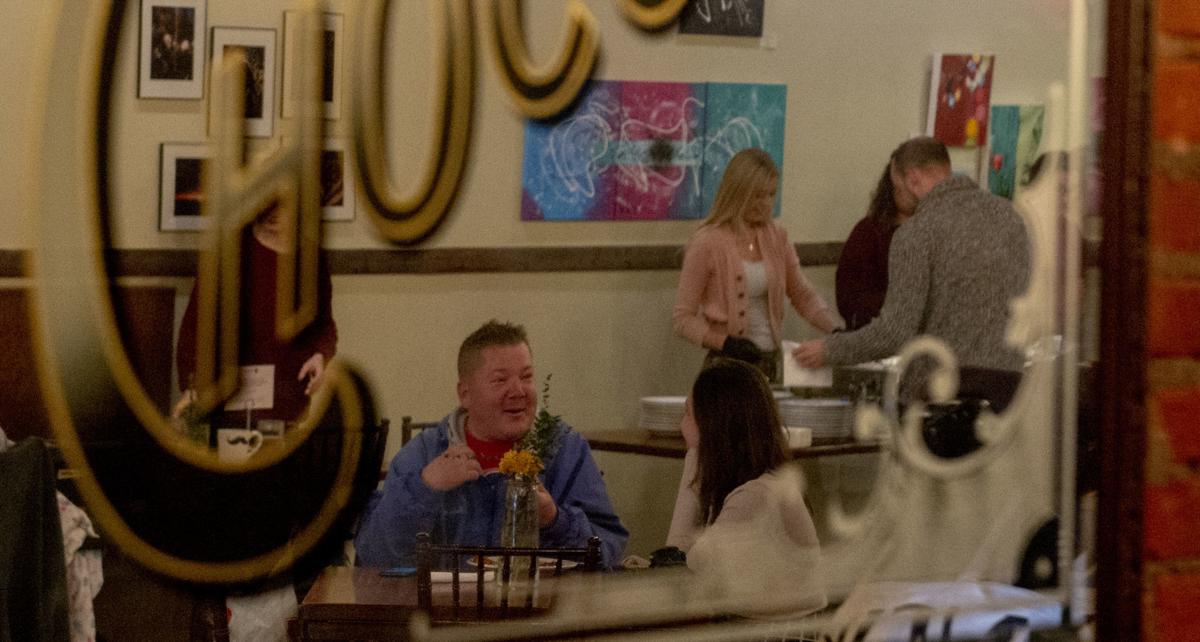 Friendsgiving at Rutabagas reflected in a mirror on Thursday. 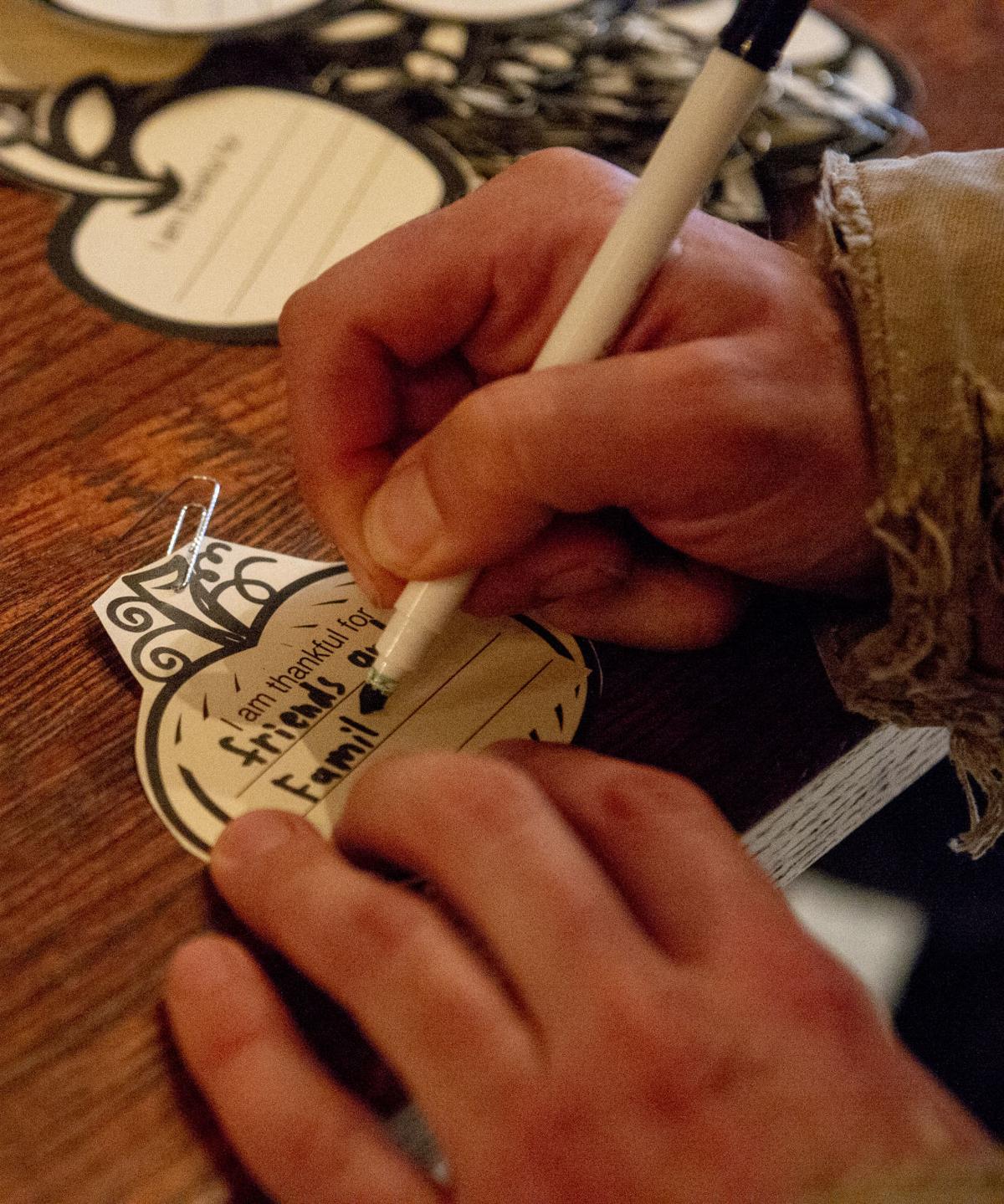 Luke Norse fills out a "I am thankful for" pumpkin on Thursday, during Friendsgiving at Rutabagas. 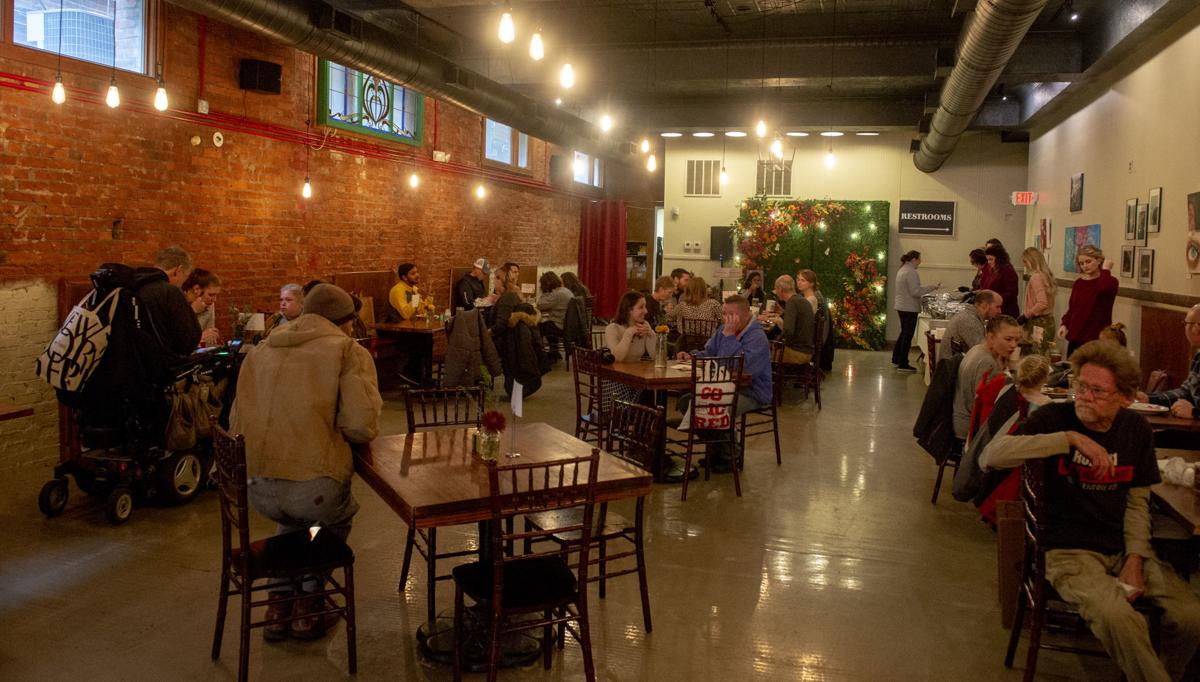 Sara Brown opened her plant-based restaurant Rutabagas for Friendsgiving on Thursday, offering food to all who came through the doors. 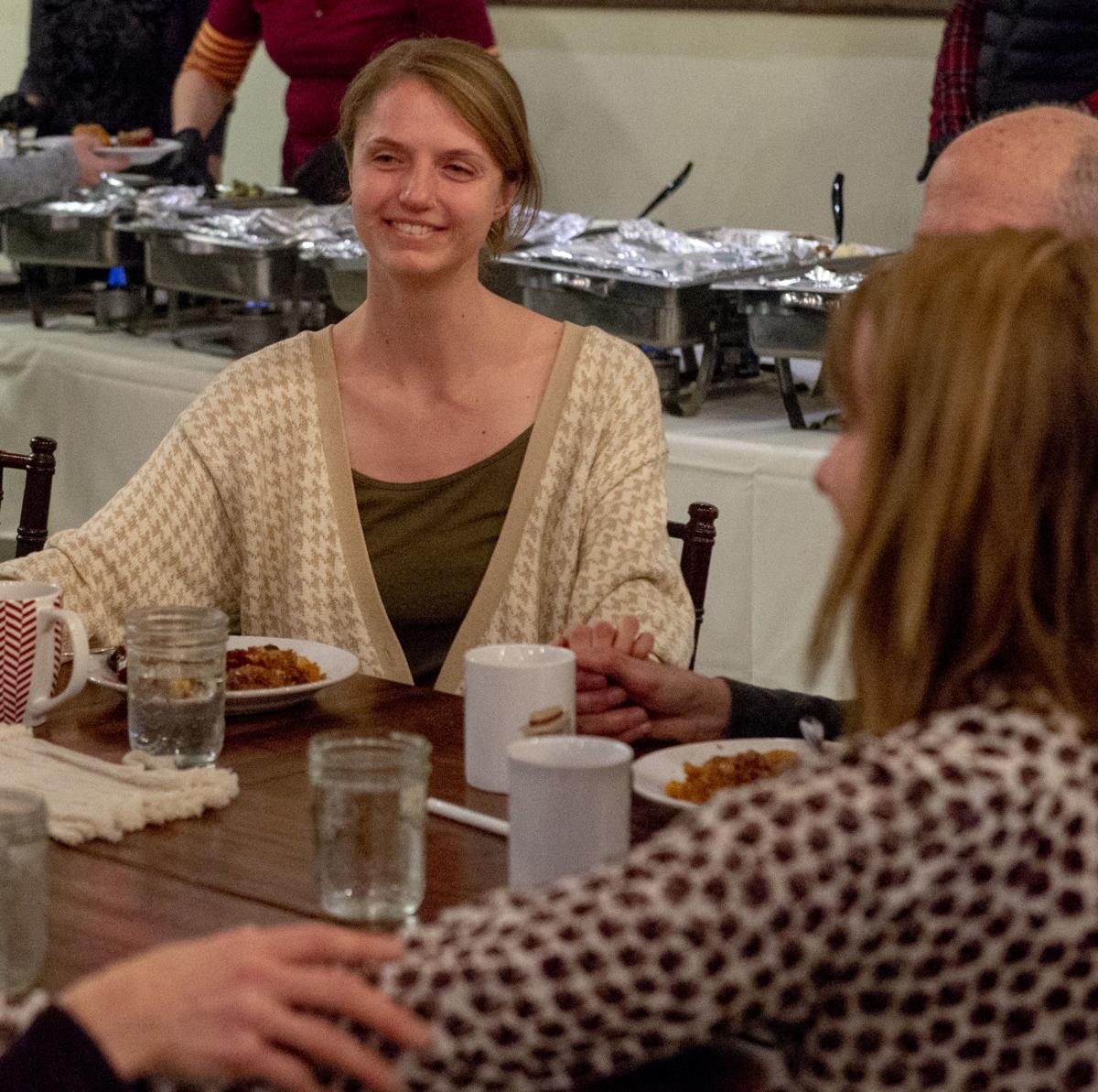 Ali Loker holds hands with the people sitting at her table on Thursday, during Friendsgiving at Rutabagas.

Sara Brown wasn’t sure what to expect when she decided to host Friendsgiving on Thursday.

It was a leap.

“I don’t know. I just really felt called to give back to the community,” Brown said two days before Thanksgiving. “I was thinking, ‘Are we going to be open on Thanksgiving? I don’t want my staff to have to work.’”

Rutabagas Comfort Food, her plant-based restaurant, had only been open a few months. Business was good on North 12th Street. She loved her loyal customers. She loved her great staff.

Then she thought about the spirit she was trying to create at Rutabagas. “A place to be warm and welcome and just to feel good in the world.”

The mother of two knew that holidays can be long and lonely for some.

So three weeks ago, she decided to go for it. She put out a call on Facebook and Instagram looking for volunteers and donations to help offset the cost of a dinner.

“All these people raised their hands and said, ‘We’re in.’”

People stopped by with money. More signed up for shifts on Thanksgiving to serve and greet, wash dishes and clean up.

Guests could give a freewill offering. If diners had no money to give, that was fine, too.

At the end of the day, all profits would be given to the People’s City Mission.

Doors would open at noon. Brown’s two daughters would be at the restaurant to eat and help, too.

In the end, Brown and her volunteers and her staff made enough food to feed 200 people.

“My only prayer is that 200 bellies come to get filled up.”

The restaurant smelled like roasting potatoes and hot coffee and home.

“Happy Thanksgiving,” Joyce Chao said as guests began to arrive. “Help yourself to water or coffee.”

Shortly before noon, the restaurant — former home of Spaghetti Works — opened its doors.

More than 100 diners carted pint jars with water to tables and filed through a buffet line to fill their plates.

Chao greeted them all. The Lincoln woman had heard about Brown’s plan, and as a vegan and a member of the Lincoln Zen Center, decided to help out.

They came with babies in strollers, with parents and friends and partners and spouses. A pair of men came in from the cold, placing their cardboard signs on empty seats.

Joni Thomas dined with her partner, Rick Strong, and two friends. Strong had been a taste-tester for Brown, months before the restaurant opened.

“Then this came up,” she said. “I wanted to go out with people who eat like I do.”

At the back of the restaurant, Jonathan Leach set up his keyboard.

The City Impact music director plays in several bands. He’d played here for brunch and heard about the Friendsgiving.

“I just told Sara, if you’d like to have music, let me know.”

The music was quiet and jazzy, a background of rhythm as the restaurant began to hum with conversation.

Ali Loker and her family took in the scene, sitting at one end of a long communal table.

Loker had learned about the Thanksgiving meal on social media and signed up to volunteer Wednesday.

Her parents, Rex and Juli Loker from Madison, Wisconsin, and her sister Emily Loker from Boulder, came to help Thursday, along with Ali’s partner, Wally Graeber.

Now it was time to eat.

“I like that it’s open to all whether you’re eating with family or friends or by yourself.” Ali said.

He appreciated the opportunity to be of service, he said.

“And the philosophy of coming together as friends with people you don’t know.”

Cindy Lange-Kubick: The old man at McDonald's and the gift of friendship

The old man was always sitting in the same booth.

Cindy Lange-Kubick: The diamond earring and the dog at the Miranda Lambert concert

They all thought the dog had eaten the diamond earring.

'It looked like he was getting hit by the car multiple times': Lincoln bus driver helps save grandfather

George Robie always drove his grandson to the corner so the boy could meet the school bus from the warmth of Grandpa’s car.

The Friendsgiving dinner at Rutabagas on Thursday featured vegetarian dishes.

Friendsgiving at Rutabagas reflected in a mirror on Thursday.

Luke Norse fills out a "I am thankful for" pumpkin on Thursday, during Friendsgiving at Rutabagas.

Sara Brown opened her plant-based restaurant Rutabagas for Friendsgiving on Thursday, offering food to all who came through the doors.

Ali Loker holds hands with the people sitting at her table on Thursday, during Friendsgiving at Rutabagas.