The Catholic Diocese of Lincoln long has considered Nebraska Wesleyan University Professor Rachel Pokora and her fellow Call to Action members as heretics — and members of an anti-Catholic sect, as now retired Bishop Fabian Bruskewitz repeatedly referred to them.

But Pokora, 45, sees herself differently — a lifelong Catholic and woman of conscience — she said she loves the church and believes it needs to change, to become less hierarchical, more inclusive of women and more accountable to its parishioners.

In 1996, Bruskewitz excommunicated all Call to Action members in the Lincoln diocese — as well as members of 10 other organizations — forbidding them from participating in diocese churches, from receiving the sacrament of Holy Communion and denying them a Catholic funeral. According to Bruskewitz’s decree: membership in Call to Action, Planned Parenthood, Eastern Star, Freemasons and seven other organizations was “perilous” and “incompatible” with the Catholic faith.

Pokora’s newly published book, “Crisis of Catholic Authority: Faith and Power in the Diocese of Lincoln, Nebraska” ($19.95 paperback, Paragon House), details the 17-year struggle Call to Action and Pokora have had with what she deems was a largely authoritarian leadership within the diocese.

An unyielding leadership proclaimed her an anti-Catholic in the Lincoln diocese, she said.

“He (Bruskewitz) believes we are an actual threat,” Pokora said.

She called him and his actions misguided.

“It shows a real lack of knowing who his sheep were,” she said.

Pokora, a communication professor at Nebraska Wesleyan University, said she wrote “Crisis of Catholic Authority” for two reasons: to tell the story “for the sake of history” and shine a light on faithful Catholics “who have been working toward justice within the church for over 30 years.”

Bruskewitz declined Pokora’s requests to be interviewed for the book. He also declined to comment for this article as well, deferring media requests to Bishop James D. Conley, the current bishop of the diocese.

Conley, who became bishop of the Lincoln diocese in November 2012, had this to say:

"In 1996, my predecessor Bishop Fabian Bruskewitz decreed that membership in organizations opposed to the Catholic faith could lead to excommunications in the Diocese of Lincoln. His decree was rooted in pastoral concern for the salvation of all Catholics in the Diocese.

I pray for the members of Call to Action and for the unity of the Church. I invite all Catholics to do the same."

In the meantime, the excommunication remains in place.

JD Flynn, director of communications and special assistant to the bishop, speaking on behalf of the diocese said there is no question that Bruskewitz did what needed to be done, and was left with few options when Pokora and others in her group refused to end their affiliation with Call to Action and return to the Lincoln diocese churches.

Having read “Crisis of Catholic Authority” in its entirety, Flynn met with Pokora on Sept. 5 at the request of Bishop Conley.

“The concern is that this presents a complex situation from only one perspective,” Flynn said of the book. “A lot of it is presented as fact when it is really interpretation and hearsay. I really don’t think it is a fair representation of fact,” Flynn said, speaking on behalf of the Lincoln diocese.

Pokora doesn’t deny that the book would have been better if the Lincoln diocese had granted her interview requests, but they were repeatedly denied.

“I did reach out to all the bishops of Nebraska asking to interview them," she said. "I only heard back from Father (Mark) Huber at Bishop Bruskewitz’s office. The letter said that the bishop would not have time ‘before the next year’ and recommended some sources for me. In that letter Father Huber passed along that Bishop Bruskewitz ‘remarked that he was surprised that anyone would be interested in writing about the sect (Call to Action), since it is so insignificant.’”

Pokora said she again contacted the bishop’s office shortly after the new year was told an interview with Bruskewitz was “not possible.”

The Lincoln diocese’s battle with Call to Action has made local and national headlines over the past 17 years — as the group lobbied for female altar servers and Eucharistic ministers, optional celibacy for priests and the diocese’s participation in the U.S. Conference of Catholic Bishops annual sex abuse audit.

While Call to Action considers itself a social justice group — and its members include former Catholic priests and nuns, Bruskewitz has long told his parishioners that it is an anti-Catholic sect made up of aging and fallen-away Catholics. In a 2006 Lincoln Journal Star news article, Bruskewitz said Call to Action opposes church teachings "on a variety of issues, such as abortion, homosexuality, abandonment of marital and religious vows, and so on.”

To be specific, among the things Call to Action’s national platform calls for are:

* Changes in the priesthood, including allowing women and married men to become priests and getting rid of the celibacy requirement for priests.

* Incorporating women at all levels of ministry and decision-making in the church.

* The popular election of bishops.

* Increasing the role of lay people in church life.

* More financial accountability within the church, including the Vatican.

Long dubbed “the most conservative diocese in the country,” the Lincoln diocese is the only one to prohibit girls from being altar servers and is the only diocese refusing to participate in the sex abuse audit, which is now in its 10th year.

Newspaper clippings reveal Bruskewitz supporters repeatedly touted their faith in the bishop’s leadership for not needing to take part in the audit.

That's something that has long concerned Pokora and Call to Action.

Pokora said “Crisis of Catholic Authority” is a critique on the structure of the Catholic church — particularly the Lincoln diocese.

“I hope my story illustrates that the structure has to change — because too many voices are being silenced,” Pokora said. “The bishop is like the king of the diocese. If he does not grant you something, you are not allowed to do it.”

She likens Bruskewitz’s tactics to parenting a small child — and that the child is just expected to listen and do what he or she is told. But Pokora said she was raised differently — to respect her parents, but to think for herself and follow her conscience.

“I feel like the church helped me grow to be an adult,” she said, but that it wants her to behave like that child. “And I can’t go backward."

But Flynn said, Pokora’s approach to reform issues simplifies some very complex issues and disregards the theology and principles behind long-standing Catholic traditions. Using boys as altar servers, for example, allows boys to decide whether or not to enter the priesthood, Flynn said. Since females can’t be priests, there is no reason for girls to be altar servers.

Increasing the roles of laity in the church undermines the role of the priest, Flynn said.

“And we lose sight of that role God has given us,” he said. “The church believes gender has meaning. Men and women are different. They have dignified roles. We make the mistake in this country that equality means that everyone does the same things all of the time. That is not true. But it doesn’t mean I have less dignity. It just means God made me to be who he meant me to be.”

For Pokora, that argument doesn’t hold true — especially after being a member of a less conservative Catholic diocese in Michigan.

“I have seen how great it can be,” she said of Catholicism. “My heart breaks for kids growing up in this diocese — one not of love, but of rules.”

Where to find the book

"Crisis of Catholic Authority: Faith and Power in the Diocese of Lincoln, Nebraska" by Rachel Pokora, a member of Call to Action and communica…

From the archive: Bishop Bruskewitz reflects on 50 years of ordained life

The office was quiet that chilly winter afternoon, and Stephen Driscoll had fallen deep into his usual routine of transcribing video interviews. 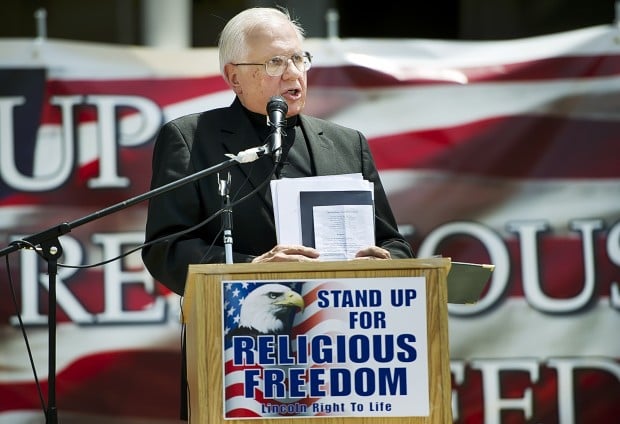 Retired Bishop Fabian W. Bruskewitz speaks at the Stand Up For Religious Freedom rally in June 2012 in Lincoln. 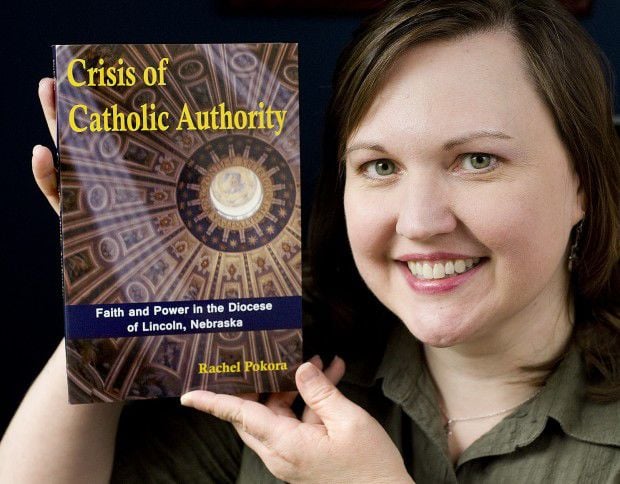 Nebraska Wesleyan University professor of communication Rachel Pokora recently published her first book, "Crisis of Catholic Authority," in which she writes about the Lincoln Diocese and the excommunication of herself and other members of Call to Action, a social justice organization calling for reforms in the Catholic church.