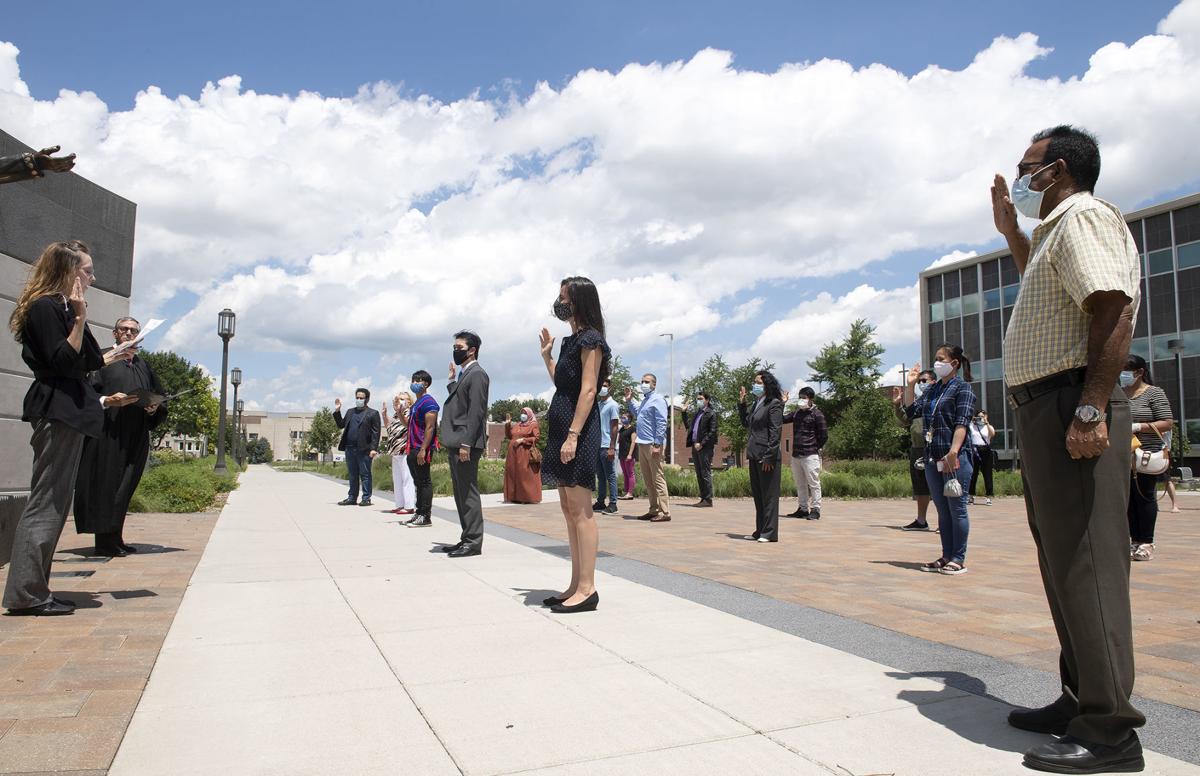 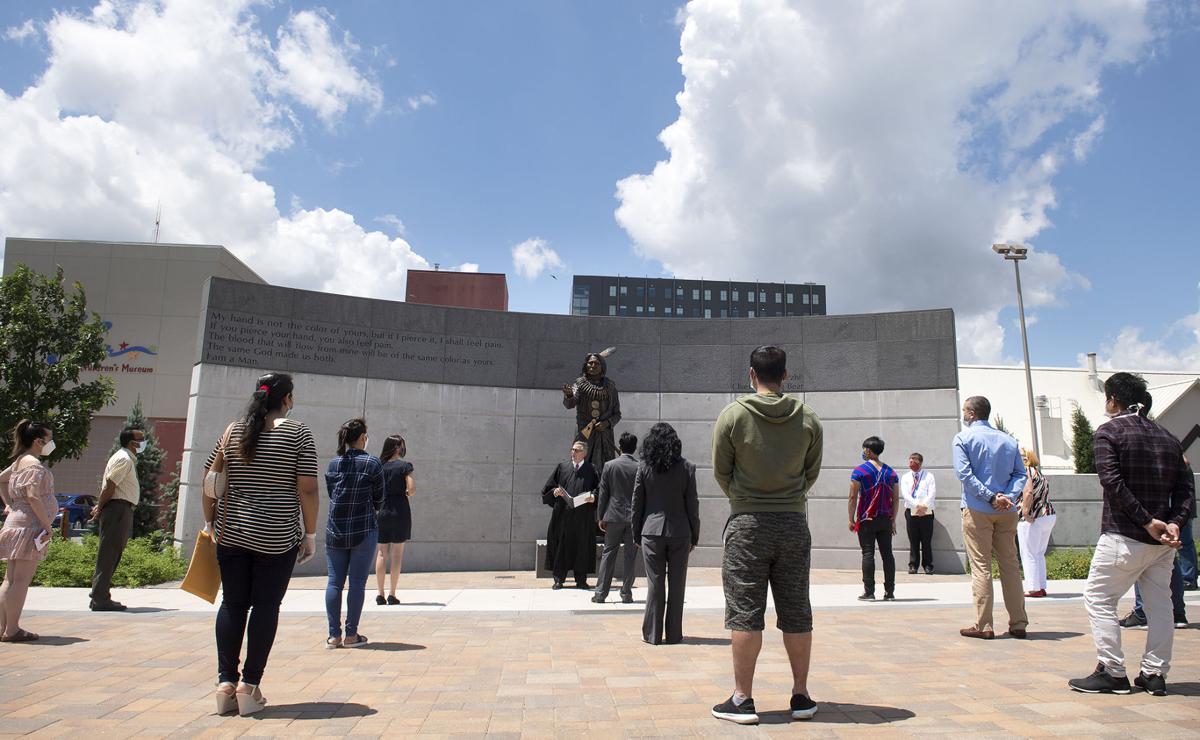 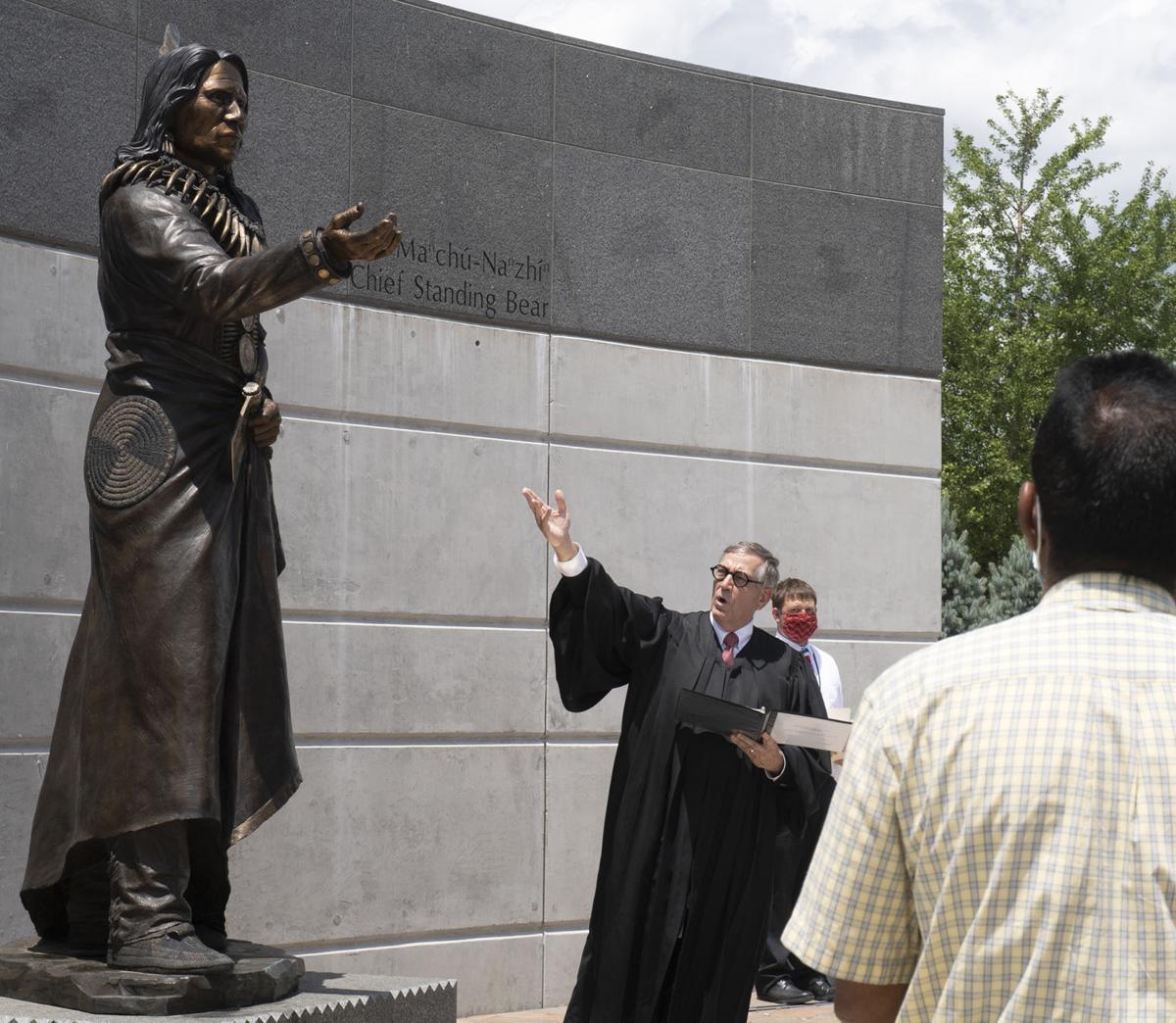 Chief Judge John M. Gerrard of the U.S. District Court explains the significance of the Chief Standing Bear sculpture during a naturalization ceremony on Centennial Mall in June. 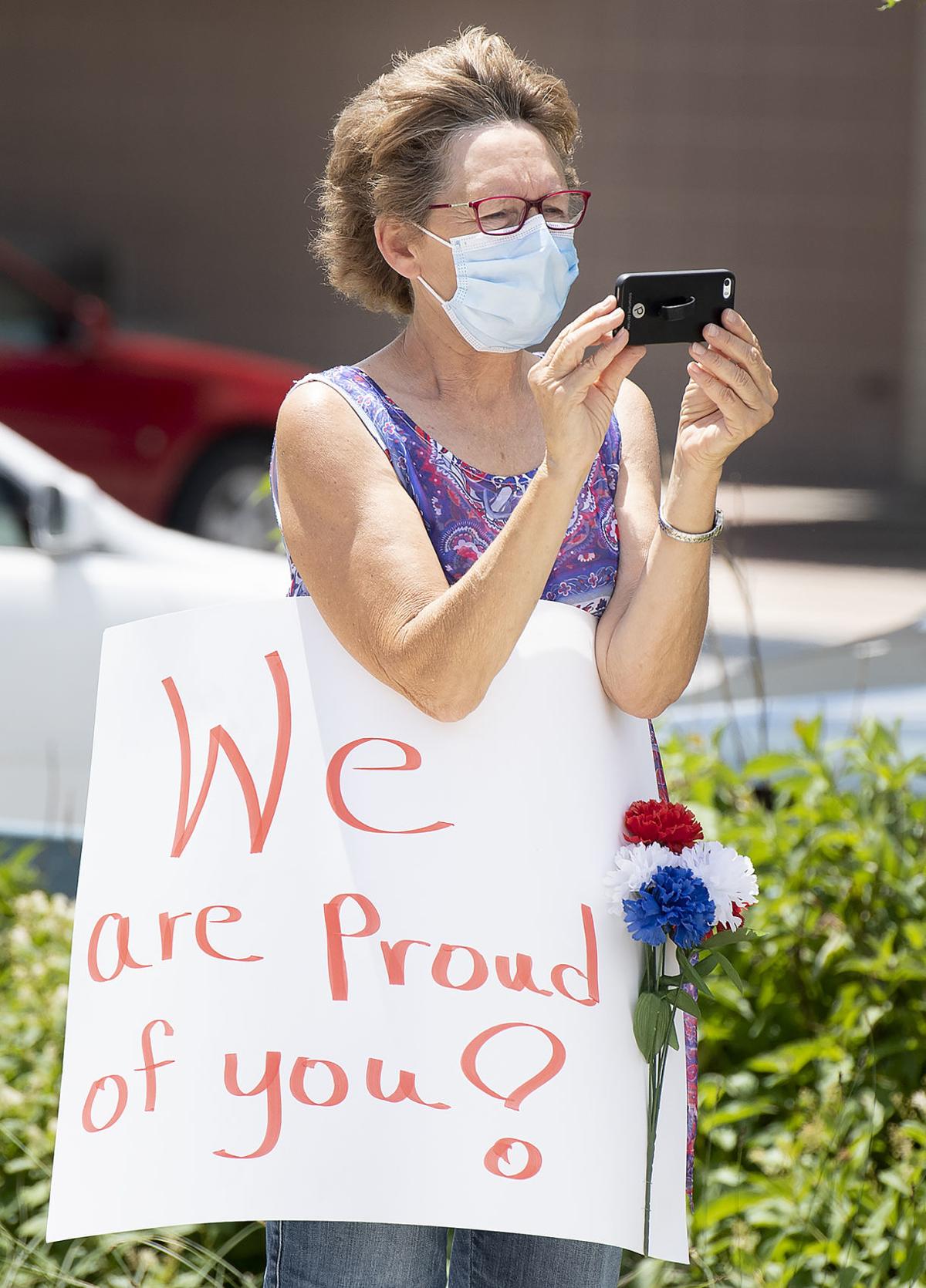 On Monday afternoon, 36 new American citizens were welcomed at the first naturalization ceremony in Lincoln since February.

Chief Judge John M. Gerrard of the U.S. District Court in Nebraska led two celebrations, each with 18 people, in front of the Chief Standing Bear statue on Centennial Mall.

The setting for the ceremony was chosen to promote social distancing, but also because Chief Standing Bear signifies the equal protection under the law that all U.S. citizens are guaranteed, Gerrard said.

“He could not be arrested and held captive because the color of his skin is different than yours or mine,” Gerrard said.

A small crowd watched as the diverse group of people pledged an oath of allegiance to the U.S. and received their naturalization certificates.

Many look forward to voting and taking actives roles in the community as citizens, including Ivonne Sinda.

Sinda, 18, of the Congo, has been living in the U.S. with her parents and made the decision to become a citizen as soon as she reached legal age.

“I had a lot of people helping me along the way,” Sinda said.

Annalisa Baade attended to support a man she met at Lincoln Literacy. She helped him learn English and study for the naturalization test.

“It’s pretty exciting and cool to see how far he has come,” Baade said.

The naturalization process is not easy, said Traci Ourada, who supported her sister-in-law from Brazil.

“I’m really excited for her,” Ourada said. “She’s worked really hard for this.”

As Gerrard congratulated the group, he reminded them they are renouncing their previous governments, but not their native land, culture, heritage or language.

“As an American, you may freely adhere to views on the left, on the right or anywhere in between,” Gerrard said. “Simply stated, there is no specific American way to think or believe.”

Cindy Lange-Kubick: An oath to do no harm and the reality of medical racism

Medical historian Deidre Cooper Owens of UNL talks about the way falsehoods about race and the legacy of slavery and racism affect the health of black and brown people.

Joseline Reyna said she was overcome with emotion Thursday morning with the U.S. Supreme Court's decision to block an effort to end the Deferr…

Though state-level data about the effects of COVID-19 on Nebraskans remain incomplete, the numbers indicate minorities were diagnosed with the…

Three years after coming to Lincoln from Tajikistan, Nigora Aminova went from cleaning patient rooms to earning her CNA before the pandemic struck.

Chief Judge John M. Gerrard of the U.S. District Court explains the significance of the Chief Standing Bear sculpture during a naturalization ceremony on Centennial Mall in June.