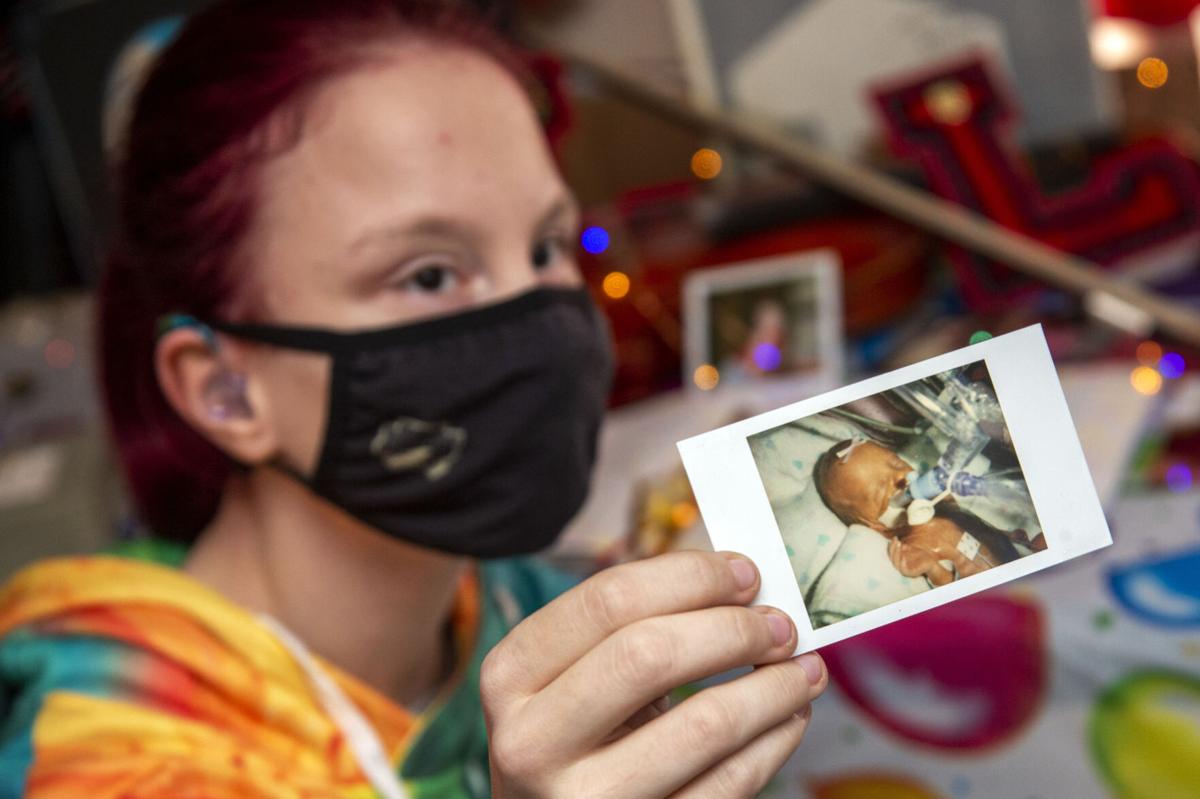 Jenna Fuller, who is turning 19 on Friday, holds a photo of herself taken when she was a newborn on a ventilator. 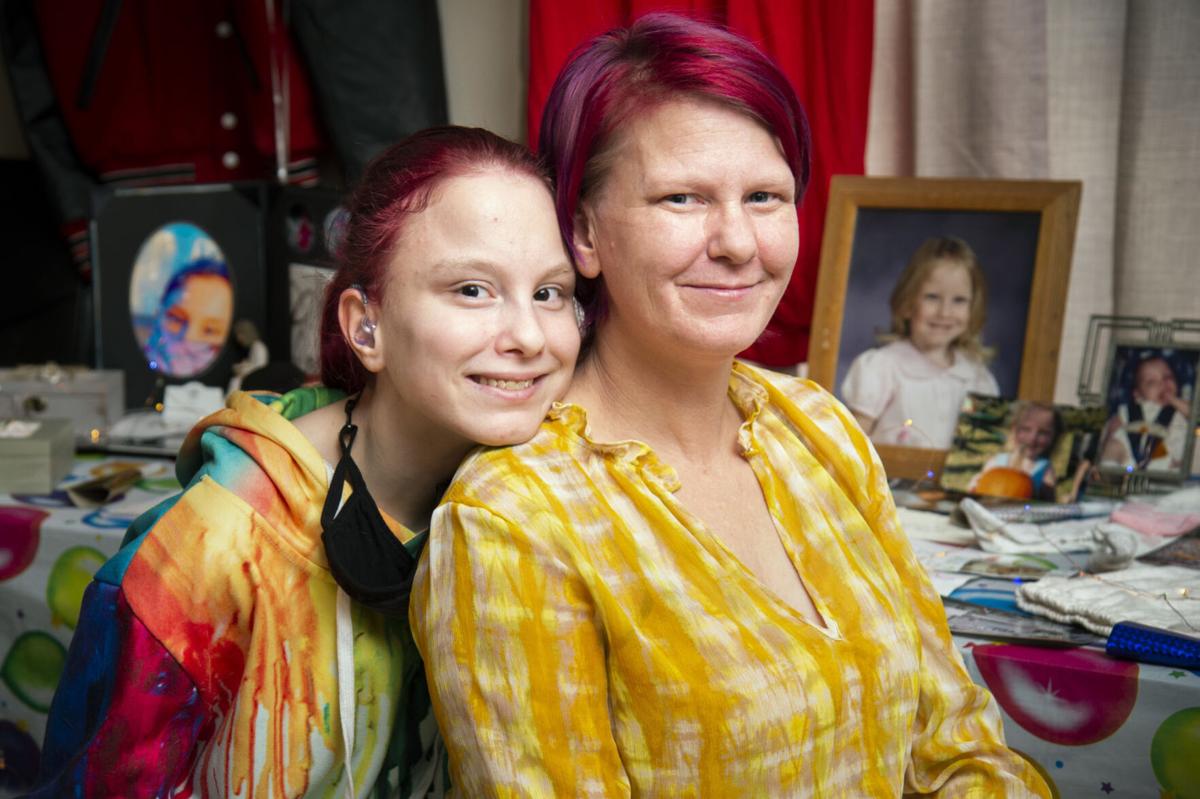 Jenna Fuller, who was never expected to survive her first night, poses for a photo with her mother, Amanda Fuller. Now, besides asthma, some vitamin deficiencies and other health hurdles, Jenna is like any other teenager. 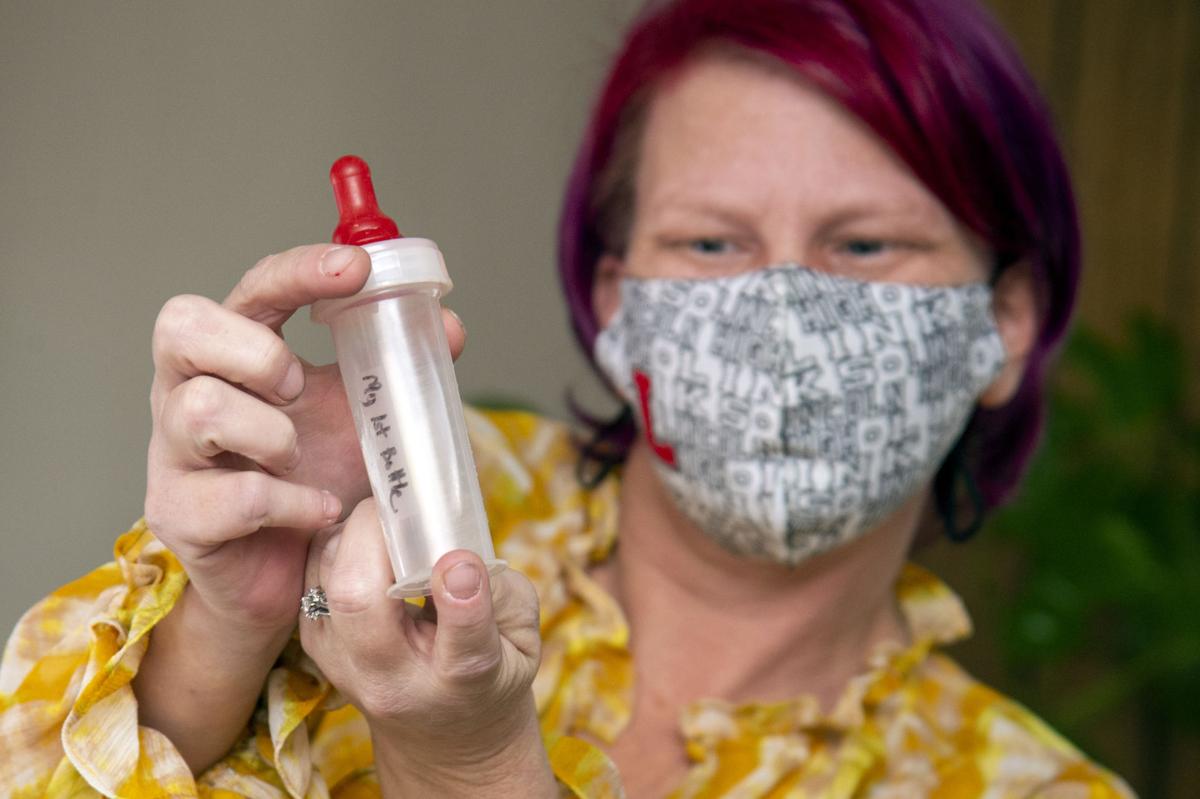 Amanda Fuller holds a milk bottle from when daughter, Jenna Fuller, was a baby.

To mark the occasion, Jenna and her mom, Amanda Fuller, are holding a livestream event Friday evening to celebrate Jenna’s successes over the years and thank the neonatal intensive care unit nurses at CHI St. Elizabeth who took care of her after she was born prematurely.

At just 25 weeks pregnant, Amanda was rushed to the hospital after her placenta tore away from her uterine wall. By the time she got to the hospital, she already had lost a lot of blood and her baby wasn’t getting the oxygen it needed.

Amanda was told if she had a cesarean section she could have an hour with Jenna before the baby died, as opposed to 10 minutes if she was delivered traditionally. So, she opted for the C-section.

After the C-section, she said the doctors took the baby almost immediately.

“The next memory I have of them is them wheeling me past her, still in my recovery bed from my C-section,” she said. “And I could barely even see over all of the equipment that they had attached to her, but I could see that she was alive.”

When she was born, Jenna’s kidneys weren’t functioning and she only had three chambers of her heart. Doctors worried she would have brain damage.

Jenna was quickly considered a lost cause and the doctor told Amanda and her then-husband to bring their loved ones to say goodbye.

Amanda remembers using Vaseline to place a bow on her baby's tiny head and singing some of Bob Seger’s "You’ll Accomp’ny Me." She prayed to God to please not take the baby.

Jenna was taken off of life support and passed around to family members, but she didn’t stop breathing. After receiving medication, her lungs grew and she was able to develop her fourth heart chamber without needing open heart surgery. She was able to leave the hospital that April.

Now, besides asthma, some vitamin deficiencies, having only one nostril and needing hearing aids, Jenna is like any other teenager.

She graduated from Lincoln High School, participated in the Special Olympics for several years and is now a freshman at Nebraska Wesleyan University planning to study social work.

Lincoln's first Black female police officer: 'I need to be a part of something that makes a difference'

Amanda and Jenna said they’ve stopped by CHI St. Elizabeth on Jenna's previous milestone birthdays to show their appreciation to the team of NICU nurses that helped her survive. This year, due to the pandemic, they are holding a livestream event through Facebook instead.

Amanda said she credits the NICU nurses with providing the care to Jenna that she needed to survive.

During the celebration, Jenna plans to perform American Sign Language to three songs that inspire her and read a speech, and Amanda will read a poem.

One of the songs Jenna plans to sign is titled “Fight Song.”

“It's the first song that I learned to sign,” she said. “It just proves that I'm here to fight another day, no matter what the world throws my way.”

They will also have a sign displayed in their front yard reading "Thanks," "NICU Rocks" and "19 years and counting."

Jenna said she thinks this year’s celebration will be an opportunity to share her story with even more people.

“I think it’s a lot bigger,” she said. “Because it's not just me and my mom just going and saying hi (to the nurses), we're telling our story to everyone.”

UNL students aim to teach people how to have productive, civil conversations

The campaign chose the metaphor of the domino effect to explain civility and how one action can set off a chain reaction in either a civil or uncivil direction.

At 11 a.m. on Monday, the foundation will unveil the plaque at a small ceremony featuring Lt. Gov. Mike Foley and the foundation’s board leaders.

Father Joseph Bernardo recognized symptoms of a potential heart problems and went to CHI Health Nebraska Heart's 24-hour chest pain clinic. He wound up having a double bypass surgery and is now recovering.

Jenna Fuller, who is turning 19 on Friday, holds a photo of herself taken when she was a newborn on a ventilator.

Jenna Fuller, who was never expected to survive her first night, poses for a photo with her mother, Amanda Fuller. Now, besides asthma, some vitamin deficiencies and other health hurdles, Jenna is like any other teenager.

Amanda Fuller holds a milk bottle from when daughter, Jenna Fuller, was a baby.