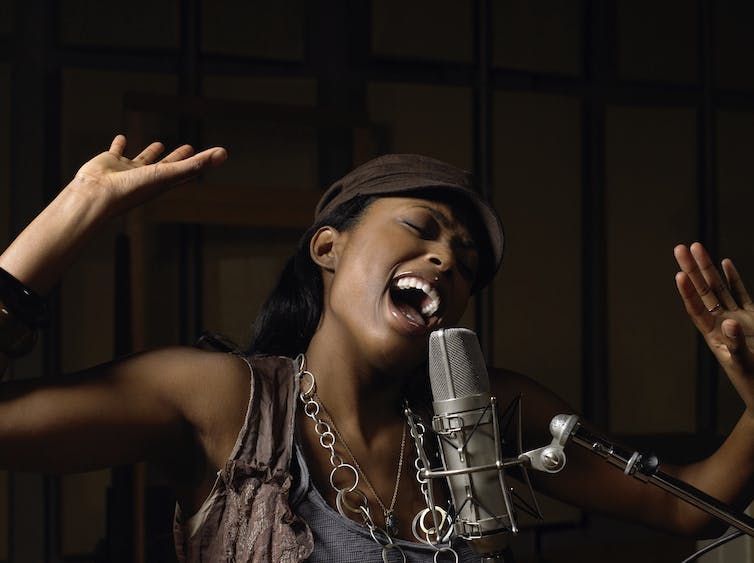 If the range of a song is good for you, you’re much more likely to enjoy and find ease in singing it. Image Source/Getty Images Bryan Nichols, Penn State

This article was originally published in February 2020.

Some friends and I recently went to karaoke. You can likely picture the scene: a restaurant adjacent to a bowling alley with a cheerful crowd and enthusiastic DJ aiming lights at a small stage. We sang a popular duet, Lady Gaga and Bradley Cooper’s “Shallow,” to the room’s applause, and I remembered how good it felt to sing into a microphone.

It brought me back to my time as a music teacher in the late 2000s in my home state of Kentucky. Like all of us, my students had their own preferences in terms of the styles and genres they liked to sing, but of course there were the mainstays that we all had to learn – for example, the national anthem, which we practiced as soloists and as a multi-part choir. We often sang spontaneously, too, belting out “Happy Birthday” if someone was celebrating theirs on a rehearsal day.

Without a doubt, some of the students, no matter their singing ability, had a tough time hitting some of the notes in these two familiar songs. Teaching those students and others later eventually led me to wonder, why is it that some of the songs we know the best are the hardest ones to sing?

As a professor, choir director and researcher at Penn State University, I’m trying to answer this question with my colleagues, in what we affectionately named the “Happy Birthday Club,” by investigating the conditions that elicit the best singing from individuals.

So far it seems that any emphasis on singing perfectly in tune can be detrimental to the idea that everyone can sing because it suggests that people should sing only if they sing exceptionally well. This is problematic for several reasons, but especially because self-concept – or one’s beliefs about oneself – turns out to be really important for participation in the arts. Our preliminary findings also tell us that we shouldn’t make judgments about singing based on familiar tunes that happen to be really hard.

As part of our work, our colleague Peter Pfordresher, of the University at Buffalo, shared some data with us on college students singing “Happy Birthday.” Some of the students started the song high in their vocal range, more started lower in their vocal range, but many of them failed when it came to the big ascending leap: the third “happy birthday.”

This is what makes this universal song so difficult for people around the world to sing. The third “happy birthday” has an octave leap, meaning a seven-note jump in the musical scale. It can be hard for people to manage, especially if you started too high in the beginning and have already topped out your range. Fun fact: “Happy Birthday” happens to have originated in Kentucky in the 1890s as a simpler song called “Good Morning to All.”

The arrow points to the highest note of ‘Happy Birthday,’ which is the hardest note for many people to hit. Douglas McCall and Bryan Nichols/Penn State University

Another notoriously tough song to sing is the “Star-Spangled Banner.” Most Americans have heard it and likely even sung it. You may have seen singer Demi Lovato perform it in January 2020 at the Super Bowl, singing it well in the common key of A-flat. At the 2019 Super Bowl, Gladys Knight sang it beautifully and much lower, in a range that seemed to fit her voice perfectly.

No matter the key, like “Happy Birthday,” the national anthem is just plain difficult. That’s because it has a huge range; you have to sing high, low and everything in between. It has small intervals, or notes that are near each other on the musical scale, but it also has big skips upward – sometimes several in a row, such as the fourth, fifth and sixth notes in the song. And if you start the song with notes that are too high, well, often there’s just no hope in hitting them all perfectly.

The arrows show the third, fourth, fifth and sixth notes in ‘Happy Birthday.’ Little steps upward and downward like these are generally easier to manage than the big leaps of the national anthem’s beginning. Douglas McCall and Bryan Nichols/Penn State University

The social influence of singing

In a recent lab meeting, one research assistant asked, “What if the reason we sing ‘Happy Birthday’ wrong is because we hear it sung poorly so often?”

We don’t yet know the answer to whether people learn songs incorrectly to begin with and if that’s part of what makes the songs so hard. Add to this that the research says some children seem to sing better alone while others seem to sing better with other voices. This means that singing a more difficult song like “Happy Birthday” is actually a complex task with multiple variables, including what part of the range you try to sing it in and whether you or someone else has chosen the starting note for you.

Interestingly, people don’t think they sing as well as they actually do. Children in one study who formed a “poor singer” experimental group were actually determined to be quite accurate pitch-wise once the researcher identified a good range for their singing voice and heard them sing alone. For adults who aren’t sure about their own singing ability, chances are you’re quite normal. Very few people have amusia, which means they can’t hear changes in pitches and can’t know if they’re singing the right note or not. Likely, you’re not one of them.

So what should we sing?

Thinking back to the karaoke room, I chose that duet because I was confident Bradley Cooper’s part fit my range. (I even tried it at home first.)

So here is some advice from the researchers of the Happy Birthday Club: Don’t judge your singing skills on familiar cultural songs; they’re just not good measures of our singing abilities. Instead, target the songs and the artists that you like, and then try to identify the music that fits your range the best. If the range is good for you, you’re much more likely to enjoy and find ease in singing it.

Nearly all pop songs have a very small range, so that may be a good place to start. Find the notes that fit you best, and give them a try at home or the next time you find yourself on a karaoke stage.

Photos: Scenes from the national anthem at Super Bowl LV

You’re smart and curious about the world. So are The Conversation’s authors and editors. You can get our highlights each weekend.

The average age of hospitalized patients at Bryan Health was 51 in March, down from 61 in January.

All other health departments in Nebraska now allow anyone 16 and older to make an appointment for a shot.

Two large-scale clinics next week will focus on people in their 40s.

With more shots going into more arms, people are beginning to return to church, too, trading their screens for a seat in a pew just in time for the holiest day in Christianity.

A man in his 70s who had been hospitalized has died from COVID-19, the Lincoln-Lancaster County Health Department said in a news release Thursday.

The person, who is in their 40s, developed blood clots about two weeks after receiving the Johnson & Johnson vaccine.

With 'roller coaster' weather in Nebraska, it's best to hit pause on planting

It's too soon for annuals and vegetables, no matter how tempting the  warm weather may be for gardeners.

Lincoln Mayor Leirion Gaylor Baird got her first dose of the COVID-19 vaccine on Wednesday, joining the 119,000 Lancaster County residents who are either fully or partially vaccinated.

The retailer joins Walgreens, Hy-Vee and RelyCare Pharmacy in offering shots in Lincoln.