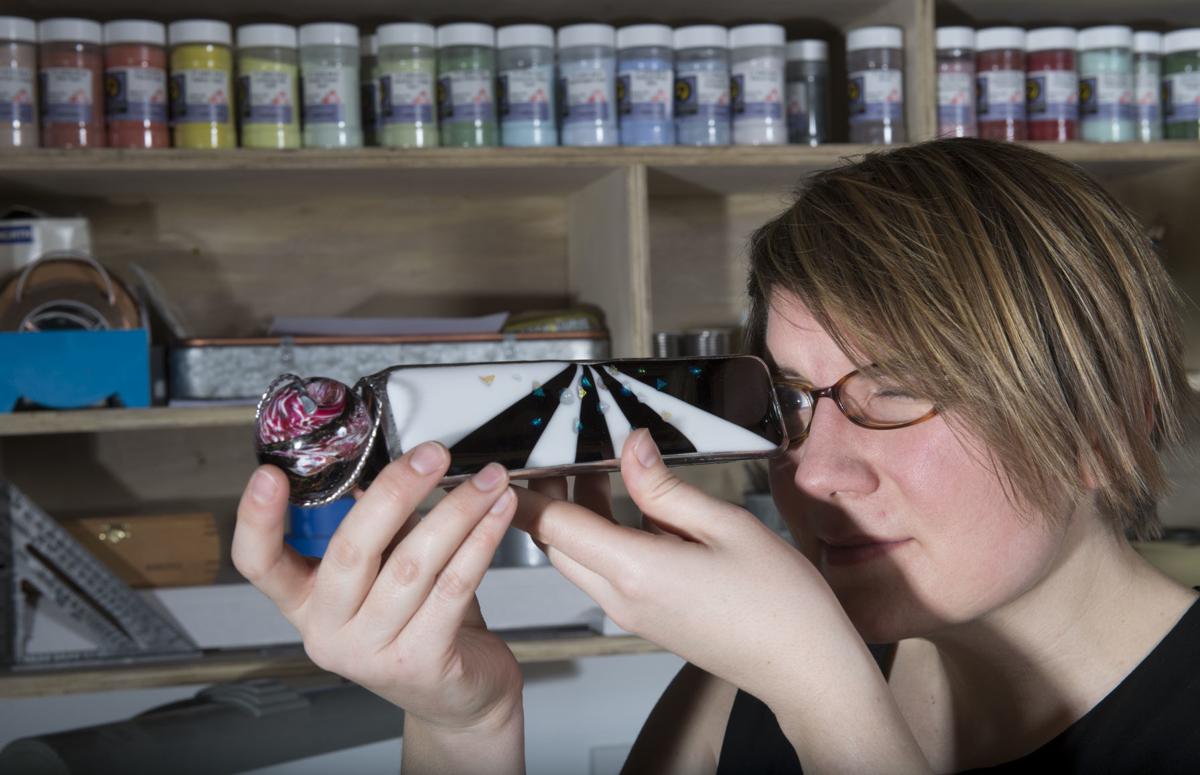 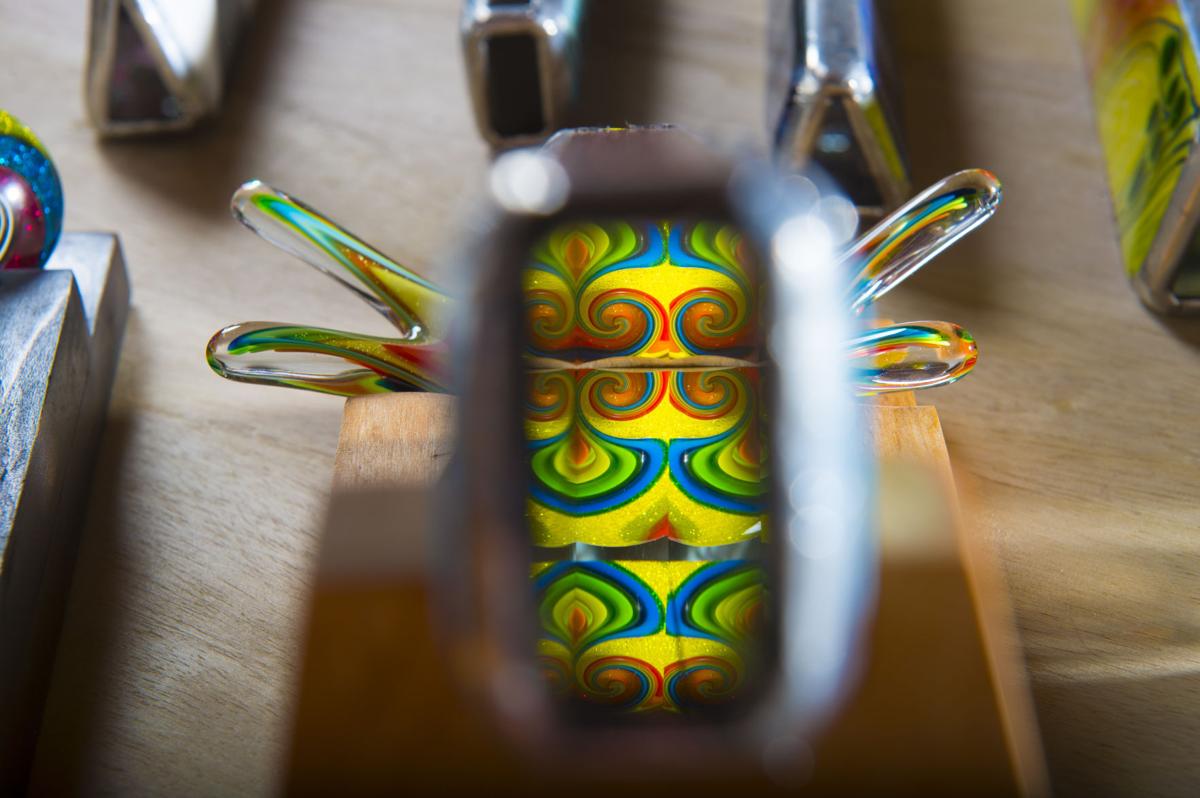 The view through one of Allison Borgschulte's stained glass kaleidoscopes. 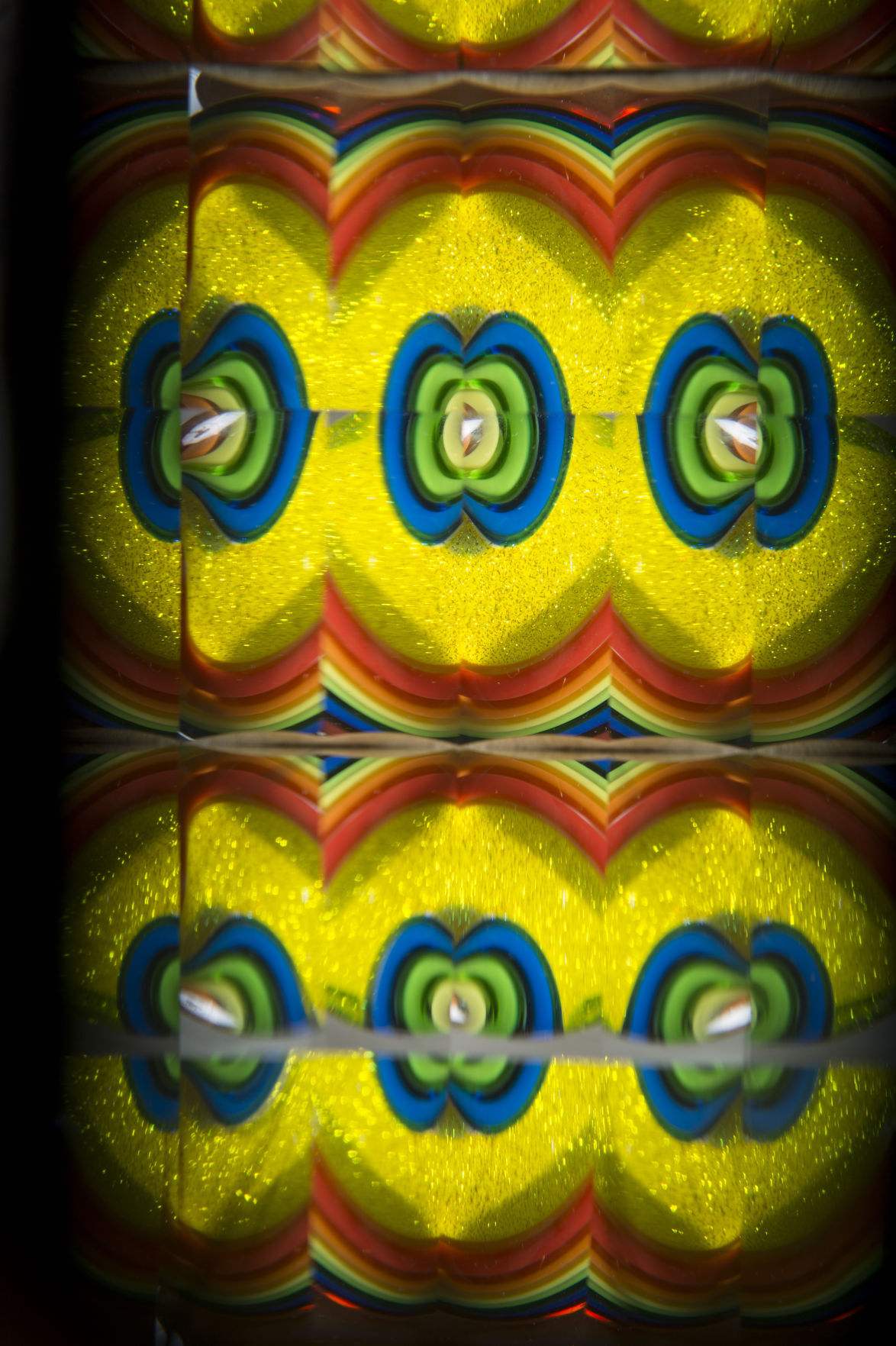 Lincoln's Allison Borgschulte creates stained glass kaleidoscopes to highlight the marvelous images found inside marbles. The angle and number of mirrors inside her kaleidoscopes determine the image reflected. 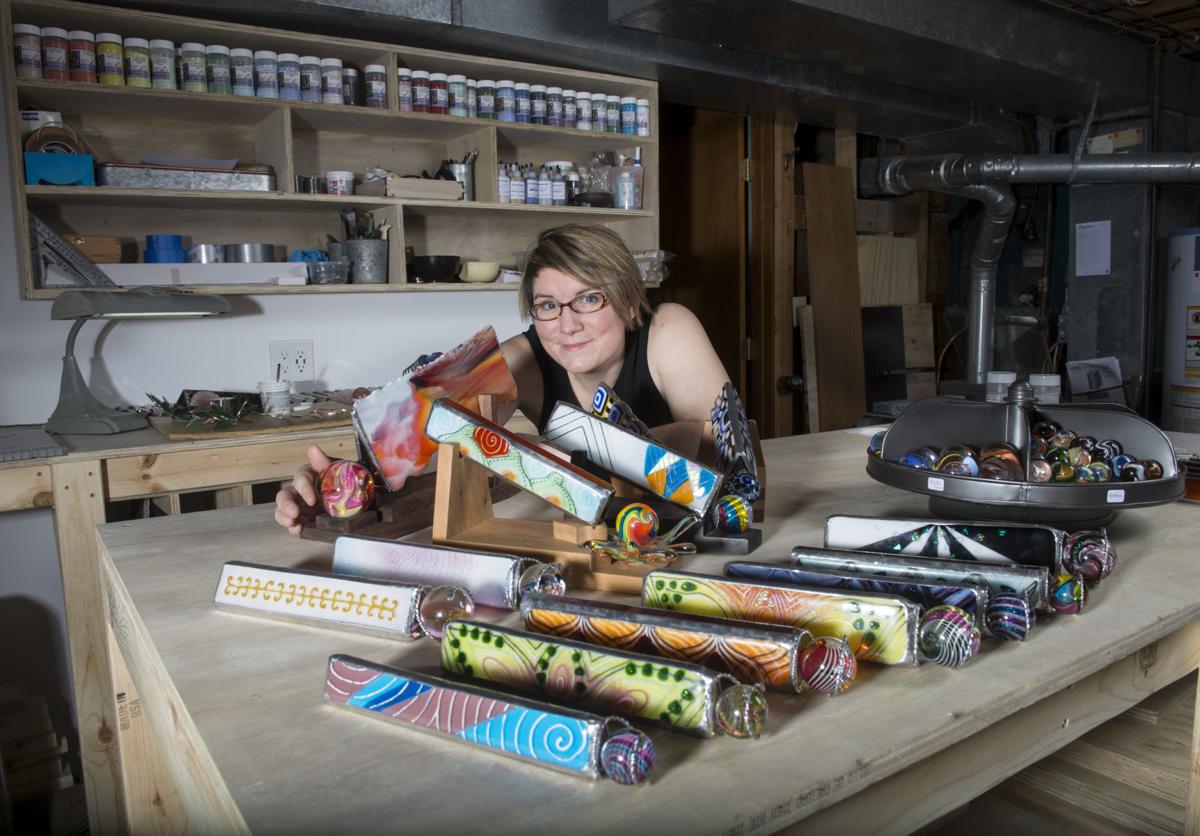 Allison Borgschulte poses with just a sampling her the stained and fused glass kaleidoscopes she makes. An employee of Moon Marble in Bonner Springs, Kansas, Borgschulte started making kaleidoscopes in 2012 to complement the marble designs of various marble artists. 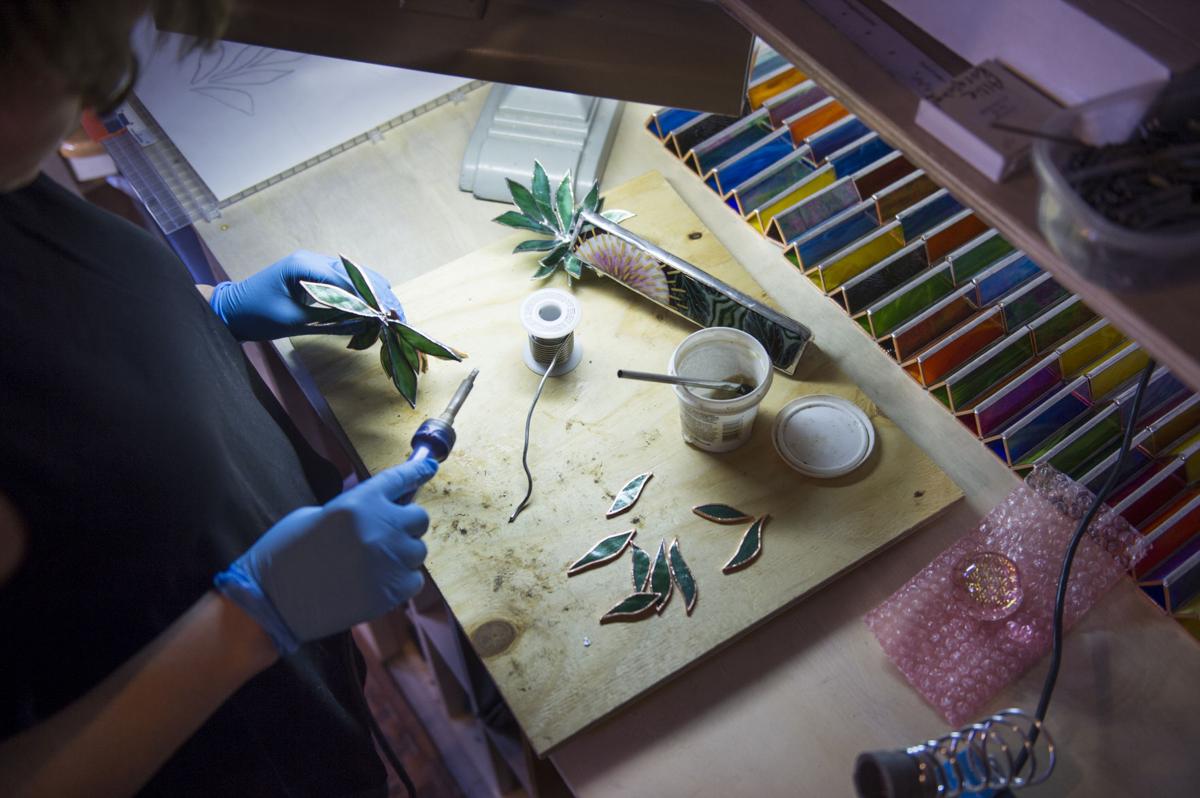 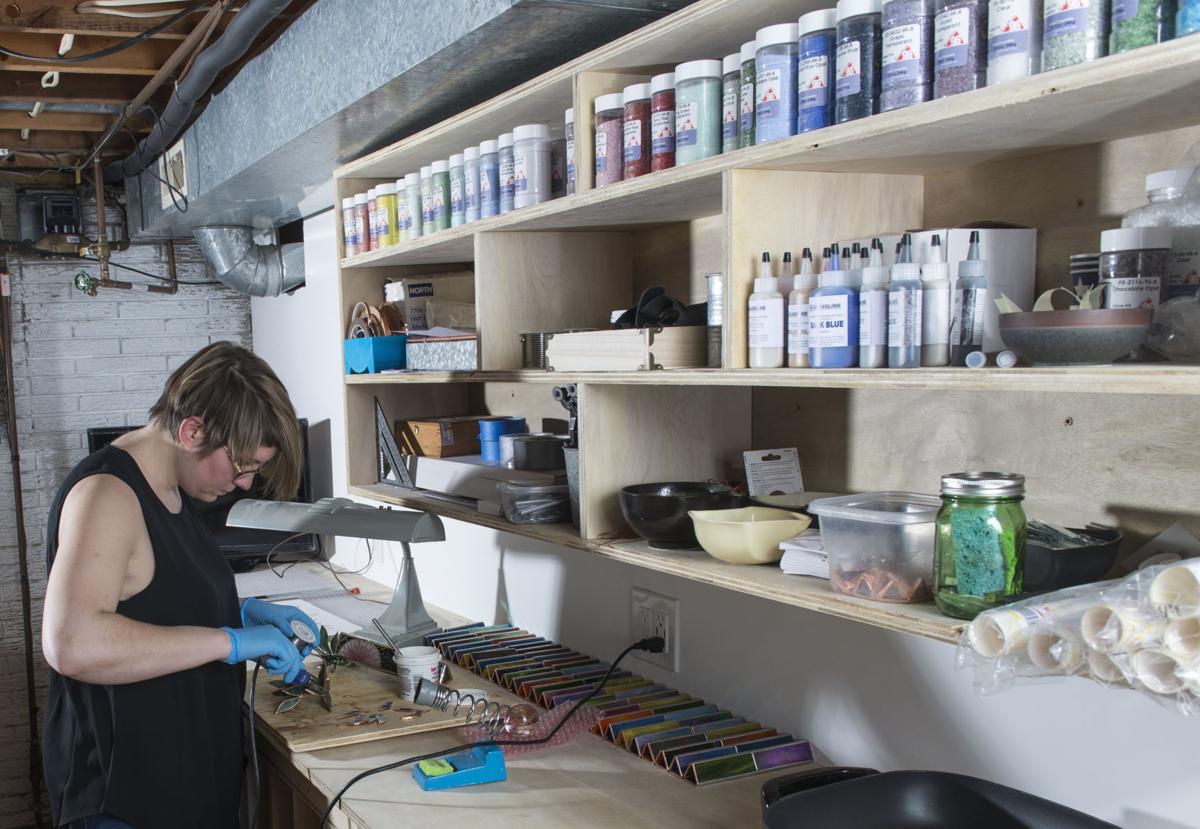 Allison Borgschulte has a thing for marbles.

The swirls of color. Intricate patterns within patterns. Strings of luminous glass molten hot then stretched and wrapped around and around into perfectly symmetrical balls of wonder.

Marbles are the Lincoln artisan’s inspiration and portal to the colorful world of kaleidoscopes.

Borgschulte’s specialty is stained and fused glass kaleidoscopes -- designed to accentuate the attributes of each artistically hand-crafted marble.

But the kaleidoscope didn’t begin as a children’s toy.

The kaleidoscope is attributed to Scottish physicist Sir David Brewster, who, in a quest to understand the polarization of light, invented the marvelous tube. Brewster patented his creation in 1816, and detailed the devices scientific attributes and amusements in his 174-page paper, “Treatise of the Kaleidoscope.”

Brewster intended the kaleidoscope to be a scientific tool, but also noted that it would be of great value "to all the ornamental arts" as a device that creates an "infinity of patterns," as well as a means “of rational amusement.”

Two hundred years after the approval of Brewster’s patent, the kaleidoscope remains an object of amusement and an artistic masterpiece.

Yet, Brewster never got rich from his creation.

However, Charles Busch did. An immigrant from Prussia, Busch (he later dropped the “c” in his name) was a rope maker by trade. Using microscopes to inspect the fibers in his ropes, he became quite enthralled with the magnifier.

“His enthusiasm for the microscope led him to study the construction of telescopes, of kaleidoscopes, and to become a most expert photographer,” according to the Brewster Society.

Credited with starting the kaleidoscope fad in the United States, Busch made them by the thousands. From 1873-74 he was granted four patents modifying and improving the magnificent images seen within. Busch used liquid-filled ampules as viewing objects. He modified the kaleidoscope chambers so different items could be placed inside for viewing, and added an outside wheel to the front to alter the background.

By the mid-20th century, kaleidoscopes went from parlor amusement to children’s toys.

The 1970s brought a kaleidoscope renaissance, as artists transformed the looking tube both inside and out, from toy to art form.

According to “The Kaleidoscope Book”: “During the 80's and 90's the kaleidoscope revival flourished as leading artists started to experiment with both the interiors and exteriors of the scopes. The exteriors were made of new materials such as hand-blown glass, alabaster and ceramics. They were also made from odd things like grown gourds, wine and beer bottles and even used Harley Davidson motorcycle parts. Scope exteriors were also made to resemble things like animals, light houses, cars and even the Chrysler Building.

“Modern artists also altered the interiors of the scope, experimenting with polarization and polyangular mirror systems for the first time since Brewster did in the early 1800's. They also improved upon Busch's liquid-filled ampules. Other new ideas were utilized such as curved reflective mirrors and complicated mirror arrangements, tapering mirrors and putting multiple mirrors inside a single scope.”

Cozy Baker, aka “The First Lady of Kaleidoscopes,” was at the forefront of this renaissance. She was author of six kaleidoscope books, curated the world’s first kaleidoscope exhibition and founded the Brewster Society for kaleidoscope enthusiasts.

Baker rediscovered the kaleidoscope in 1982 while on tour with "Love beyond Life: Six Ways to Triumph over Tragedy," her book documenting her journey from grief following the death of her youngest son.

Baker picked up her first kaleidoscope from a Nashville, Tennessee, gift shop. On her plane ride home to Maryland, Baker pointed the tube out the window and watched the dancing images within.

She found it in the kaleidoscopes she collected by the hundreds. At the time of her death in 2010, Baker, 86, had more than 1,000 kaleidoscopes filling more than 10 rooms in her Maryland home.

“The kaleidoscope changed more in 25 years, from 1975 to 2000, then it had in the past 150 years,” according to “The Kaleidoscope Book. “While the technological improvements were important, it was the craftsmanship that really set the modern scope apart. Mostly the modern scope is characterized by its beauty, both inside and out. Kaleidoscopes became works of fine art during this era.”

A lecture by Jason Pollen, head of the institutes Fiber Department, introduced her to the versatility of fiber, and she expanded her artistic repertoire to the fibers she crafted, colored and wove into one-of-a-kind creations. She spent years working at I.E. Handmade Fiber Art and Design Studio, in Bonner Springs, Kansas, occasionally exhibiting her work in Kansas City.

Just down the street was a little marble shop -- Moon Marble Company. The store with its marble artists and multitude of marbles fascinated her.

So when the fiber art studio closed shop, Borgschulte gravitated to Moon Marble. The marble shop hired her as the company’s graphic artist and webpage designer.

Over the past 11 years, she’s built four websites for Moon Marble.

Over the years she has marveled at the art of marbles.

Even mass produced, machine-made marbles can look good through a kaleidoscope, Borgschulte said. But the most awe-inspiring are the handcrafted marbles of true artists.

“I collect their work with awe and wonder at the miraculous worlds they are able to capture in a sphere,” Borgschulte wrote on her web page. “I began fantasizing about how a kaleidoscope might enrich my collection as it would allow me to view my marbles in a whole new and ever-changing way. This led to me taking up the craft of kaleidoscope making.”

In 2011, Borgschulte, her husband, Jerry, and daughter, Lucy, moved to Lincoln. Borgschulte continued to work remotely for Moon Marble. Then when son Jack was born, she took a break from the world of work, focusing on her children. She spent her free time weaving and painting her fibers, making wearable art that was sold at museum gift shops, galleries and specialty stores.

In 2012, Borgschulte, who was looking for a new creative outlet and some adult conversation, bought a Living Social coupon for a stained glass class at Lincoln’s Architectural Glassarts.

And she was hooked.

Her first stained glass project, a gem-filled tree, sparkles in her dining room.

When she returned to Moon Marble, she experimented with making kaleidoscopes.

“I bought books to get the basics," she said. "Then I taught myself."

Before kaleidoscopes, she made stained glass boxes.

"That’s how I learned to make forms,” Borgschulte said, holding up a Harry Potter-inspired Chocolate Frog Box she made for her husband.

Her basement studio is a glass lovers' fantasy. Kaleidoscopes of all shapes, sizes and configurations fill a giant table.

For the most part, Borgschulte’s kaleidoscopes come in three sizes, with a variety of two and three mirror systems. Small differences in the angle of the mirrors and the number of surfaces reflected upon give completely different images in the scope.

“The key to kaleidoscopes is precision,” she said. “A 45-degree angle will give you a four-point star,” she said holding aiming the marble end of the kaleidoscope toward the sunlit window. “A more acute angle of the mirror … a 36-degree angle … gives you a 10-point star.”

And an error as small as one-eighth of an inch can ruin the whole thing.

“I strive for as much variety and potential imagery as possible,” she said.

Borgschulte collaborates with marble artists -- creating kaleidoscopes designed on the outside to complement the marble from the outside, and produce the most dazzling reflected images on the inside. Using different glass, wire and a palette of fusable glass powders, first, paint and gems, she designs the kaleidoscope exteriors to reflect the sense of outer space, celestial bodies, windswept prairie and remote wetlands.

With handcrafted marbles selling anywhere from $145 to $375 a piece, Borgschulte’s creations (which include the marble) top out at about $565.

Understanding that puts her work out of the price range of your average art show/museum store shopper, she also has lesser priced four-inch kaleidoscopes made with simple stained glass and machine made marbles. At $30 to $35 each, they are marketed to children and kaleidoscope newcomers.

“The challenge is to buy marbles from artists that I think are interesting … and finding something that works in a kaleidoscope,” she said.

Not every marble creates mesmerizing designs. And some marbles that may not look all that interesting on the outside can offer brilliant images through the mirrored reflections of a kaleidoscope.

“I like the experience of playing around with different mirror systems and see what you get in different ways,” Borgschulte said. “The challenge is the mirror system. It is right for the marble? I want to show off the other artists work to the best advantage.

“There are not a lot of marble kaleidoscope makers. But people who view these kaleidoscopes experience marbles in whole other ways.”

How anxiety can take a huge physical toll on your body

How anxiety can take a huge physical toll on your body

About two-thirds of Lancaster County residents 16 and older are fully vaccinated, but health officials say that's clearly not enough to stamp out the disease. Restrictions aren't being discussed at this time, Health Director Pat Lopez said.

The hard seltzer craze has come to an end

The once unstoppable growth of hard seltzer has gone flat.

The death was a man in his 50s who had been at home, the health department said.

With the start of classes roughly a month away, barely more than a third of the state's 12- to 17-year-olds have received at least one dose of COVID-19 vaccine.

Why does white always go first in chess?

Ever since the late 1800s, it has been standard for white to go first in chess. Has the time come to get rid of that rule?

Sarah Browning: Keep your BLT safe from BER and other tomato traumas

Most problems don’t make tomatoes inedible and can be managed. Trim away the damaged tomato section, and the rest is fine to eat. Let’s take a look at some of the most common.

Lincoln gets $3.5 million grant for COVID-19 outreach to minorities

The grant will help the city get more information to vulnerable communities and boost vaccinations.

Which insect repellent is best for children? Here's a pediatrician's advice

Warm weather means more kids are getting outside to play, hike and enjoy the fresh air, and it also means preventing insect bites.

The person who tested positive is in the Elkhorn-Logan Valley Health Department area, which covers Burt, Cuming, Madison and Stanton counties.

The view through one of Allison Borgschulte's stained glass kaleidoscopes.

Lincoln's Allison Borgschulte creates stained glass kaleidoscopes to highlight the marvelous images found inside marbles. The angle and number of mirrors inside her kaleidoscopes determine the image reflected.

Allison Borgschulte poses with just a sampling her the stained and fused glass kaleidoscopes she makes. An employee of Moon Marble in Bonner Springs, Kansas, Borgschulte started making kaleidoscopes in 2012 to complement the marble designs of various marble artists.