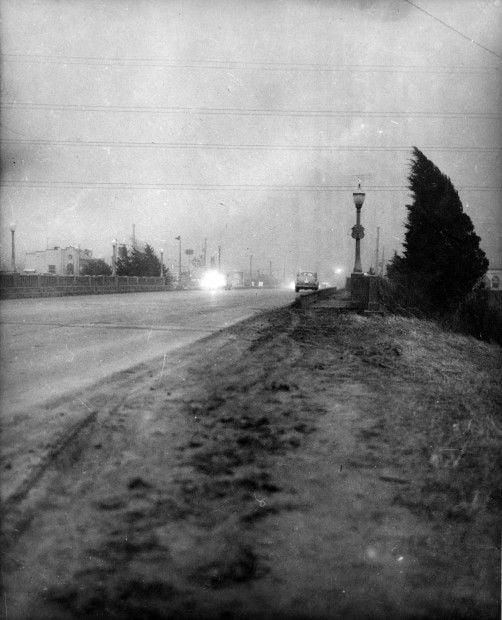 Dust storms hit eastern Nebraska in March 1950. The view is looking east, toward Lincoln on O Street. The concrete shoulders are the bridge over Salt Creek.

Ken Burns’ documentary “The Dust Bowl” chronicles the 1930s as “the worst man-made ecological disaster in American history,” and some thought it presaged the end of the world. Yet 2012, so far, has proven drier than any year in that bleak decade.

Throughout recorded history Nebraska has suffered periodic catastrophic dust storms;  geologists see wide strata of dust from the 1400s throughout the Great Plains. Most of the current comparisons refer to the Dust Bowl days of the 1930s and overlook the tremendous dust storms of the 1890s, which were so strong they broke out windows in Adams County.

The devastation of the 1930s started during World War I when the federal government urged farmers to produce more wheat to feed Europe. As prices rose, farmers plowed under thousands of acres, destroying native prairie grasses, some with root structures many feet deep that stabilized the soil even in drought conditions.

The Great Depression, with beginnings in 1929, destroyed the American economy, but even its effects did not squelch the profits of wheat farmers who, in the 1920s, as prices for wheat declined, simply sacrificed even more prairie to increase production.

In 1931, the loose soil started blowing, and a year later, 750,000 acres of farmland had been abandoned in Nebraska alone. The federal government began paying farmers not to cultivate their land in order to encourage a return of prairie grasses, and land conservation techniques were introduced.

The so-called black blizzards started in 1934, with drifting dust captured along fence lines, sometimes drifting up to the roof lines of houses and farm buildings.

Just when it was thought it couldn’t get any worse, 1935 dawned with dust storms, and on April 14, 1935, a dust storm termed “black Sunday” began moving tons of top soil to the north and east. Strong winds carried the dust to the East Coast and Washington, D.C., which spurred action on all governmental fronts. It was said that this storm sent clouds of dirt as far as London and even Moscow.

In Lincoln, the top of the Capitol was obscured, schools closed and street lights were turned on at midday. As summer began, in some areas of Oklahoma, Texas and Kansas, road graders were called in to clear highways and railroad tracks.

As the drought continued, the year began and was termed the driest in more than 50 years, temperatures of more than 100 degrees cooled only slightly overnight and high winds persisted, though somewhat abated, in Nebraska and eastern Colorado.

What already was being called the Dirty Thirties in Nebraska was termed the Dust Bowl by Associated Press writer Robert Geiger, who noted the hardest-hit areas were in the panhandles of Oklahoma and Texas and southwest Kansas. Later, the area generally included a strip through western Nebraska into southern Canada.

Newsreels and newspapers reported farm animals were suffocated and buried in dust; cars and houses were stripped of paint as if sandpapered; the sun was completely blotted out as visibility dropped to zero; many wore scarves and cloth masks whenever going outdoors; and damp towels were hung over windows to prevent dust, which seeped through every crack to cover everything, even indoors.

In Nebraska, nature, ever perverse, sent a rainstorm so fierce it couldn’t be absorbed into the dust, and more than 100 people died in the flooding of the Republican River. Still not done, 1936 added the scourge of a grasshopper infestation.

Finally, in 1939, more normal rainfall occurred, and the Depression lessened, while machines began to replace horse power on farms and in cities.

In Nebraska from 1936 to 1939, farmers were said to have lost $112 million in crops to the drought and more than $30 million to the grasshoppers. Populations decreased in many rural areas, the number of farms plummeted by as much as 50 percent and marriage and birth rates dropped to their lowest levels in decades.

In the Dust Bowl, farmers received aid of $200 million from 1933 to 1940 as the federal government retaliated with the Agriculture Adjustment Administration, Federal Land Bank and other programs.

On a local level, ponds and dams were built and new farming techniques, such as contour plowing, were introduced. One giant program included the planting of a mile-wide shelterbelt of trees in a north/south alignment from Texas to Canada, though it never was completed.

All of the problems were “primarily the work of man … stripping the landscape of its natural vegetation,” which, if left undisturbed, could have prevented the worst of the Dust Bowl problems.

Today, in 2012, Lincoln is about 10 inches below normal for the year in rainfall. Coupled with 50 to 75 mph winds, dust storms and sprinkles brought muddy rain in early November, and Nebraska, so far in 2012, is said to be drier than in any year during the Dust Bowl.

How to build your own DIY air conditioner

Study: Dog owners are willing to risk their lives for their pets

Study: Dog owners are willing to risk their lives for their pets

Dear Amy: My husband and I have two close friends: “Jack” and “Katrina,” who are married to each other and have two children.

Ask Amy: Widower ponders the ticktock of moving on

Dear Amy: It’s been four months since losing my wife of 40 years.

Dear Amy: A bunch of us blood cancer patients, as well as others with compromised immune systems, are starting to find out through blood tests…

Dear Amy: This fall my vaccinated family is invited to a nephew’s wedding.

Dear Amy: My 46-year-old daughter, “Janet” has had a difficult life. One of her children was born with a severe illness. It was traumatic for …

Dear Amy: My friend “Laura” has seemed distant to me, lately.

Ask Amy: Cancer recovery is slow and not very steady

Dear Amy: The week the COVID lockdown began last year, I was diagnosed with breast cancer. My husband couldn’t even be in the waiting room dur…

Dear Amy: My guy and I have been dating for five years, engaged for three, and living together for two.

Dear Doctor: I know what probiotics are, and I've heard of prebiotics. Now there's supposed to be something called postbiotics? What are they,…

Dust storms hit eastern Nebraska in March 1950. The view is looking east, toward Lincoln on O Street. The concrete shoulders are the bridge over Salt Creek.