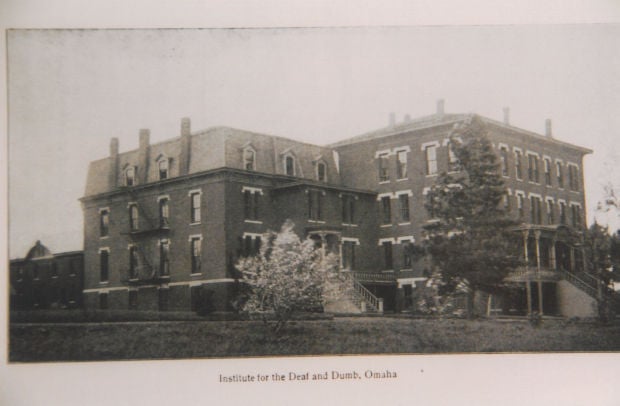 Shown above is the Nebraska School for the Deaf in Omaha, with its first building on 45th Street and a second structure, taken about 1878.

During its 131 year existence, the Nebraska School for the Deaf in Omaha was the subject of national acclaim, was both lauded and later derided by no less than Alexander Graham Bell and now survives only in memories and a small, little-publicized museum.

In 1867, Omaha Lutheran minister the Rev. H.W. Kuhns, who was also on the city’s school board, was approached by the parents of Kate Callahan, a young deaf girl. The Callahans explained that they felt the local schools were ill-equipped to teach their daughter and queried Kuhns on whether the territory could provide educational aid. When Kuhns discovered there were no specific territorial provisions for education of the deaf, his lobbying efforts led to the 12th Territorial Legislature’s passage of an act on Feb. 7, 1867, which was signed by Gov. Alvin Saunders. This act called for the establishment of a school for the deaf in Omaha to be located not more than three miles from the city.

While a specific building was planned, the school leased a building variously described as in the woods south of St. Mary’s Avenue or at 22nd and Leavenworth. Here William DeCoursey French opened the Nebraska School For the Deaf under the direction of a board that consisted of the Rev. Kuhns and other members from various sections of Nebraska. The first matron at the school, which had 13 students and reported the year’s expenses at $2,995, was Mrs. Jennie Wilson, William French’s sister.

The city of Omaha then donated 10 acres of land at 45th and Bedford for the school, which was interestingly the same tract size as was allowed for the establishment of the University of Nebraska in Lincoln, which was incorporated in 1869. The city of Omaha granted an appropriation of $15,000 for a building, while the campus was increased to 23 acres.

On this property, a brick, three-story building with stone trim, 44 by 60 feet in size, was opened on Jan. 1, 1872, at about the same time that French resigned and R.H. McKinney took over. The total cost for the building, including furniture and fixtures was announced at $30,000. The new facility opened with 29 students and seven teachers.

The following year the enrollment reached 42 students, a printing department was established and, in 1874, the students began publishing a semimonthly newspaper, The Mute Journal. The state Legislature appropriated $15,000 for the construction of a second building in 1875, a barn was built, the property fenced and a number of trees were planted. The new three-story brick building, which allowed the addition of a carpentry shop and allied classrooms, was finally completed in 1879, while enrollment increased to 53. The annual appropriation for the 1878-79 school year was reported at $6,000, which accommodated three teachers, while the report to the Legislature noted that 13 boys were now also studying printing.

In 1879, Alexander Graham Bell, whose mother was deaf and prompted his profound interest, visited the school, and though he praised the school, he observed that although the students were deaf, they were still called to meals by a dinner bell rung by school principal J.A. Gillespie. Indeed, fewer than 15 percent of the students had sufficient hearing to directly respond. Gillespie not only corrected this interesting oversight but instituted classes to teach speech as well.

State funding allowed funding of a third building for $16,000, which connected the first two structures, and an additional $4,000 financed completion of a heating plant for the entire campus. It was also noted in the annual report to the Legislature that there were now 80 students enrolled and that both the printing and carpentry shops, by selling wares locally, were actually self-sufficient.

In 1887, the associated high school reported that Ella Rudd had become the first official graduate. The school was cited nationally in 1893 for its commitment in encouraging teachers to innovate their methods. Enrollment had increased to 130 by 1893, which moved the Legislature to appropriate $38,700 for yet another building a few years later.

After the turn of the century, some of the graduates from the high school began attending class at Gallaudet University in Washington, D.C., but disagreement nationally began to haunt education of the deaf and the Nebraska school as well. Despite considerable staff and board lobbying, the Nebraska Legislature, spearheaded by their old ally Alexander Graham Bell, voted to ban the use of American Sign Language in classes at the school. The new proposal pushed the use of lip reading, saying that sign language would tend to isolate children, and though the classroom teaching strictly adhered to the new legislation, outside of classes students continued to use ASL.

In 1931, the high school’s basketball team, the Tigers, beat Schuyler, McCook, Jackson (University Place) and Crete, capping its year’s 29 wins and 0 losses by becoming the Nebraska Class A High School champions despite the fact that there were only 14 boys in the entire high school.

During the 1970s, the legislature allowed reintroduction of American Sign Language. In 1978 the school’s Jerry Sides was named Nebraska’s Teacher of the Year, and in 1992, the school was considered as one of the outstanding high schools in the United States.

The school’s declining enrollment, despite considerable lobbying, brought the Legislature’s first attempt to close the school in 1984. Ultimately, with fewer than 30 students, the school was closed in 1998, and the campus sold for $2.5 million.

Through the years the Nebraska School For the Deaf educated more than 2,000 students, with the only visible remnants being a Nebraska State Historical Society marker at 3223 N. 45th St. and a small museum that opened in 2001.

These plants are toxic for your dogs and cats

Shown above is the Nebraska School for the Deaf in Omaha, with its first building on 45th Street and a second structure, taken about 1878.