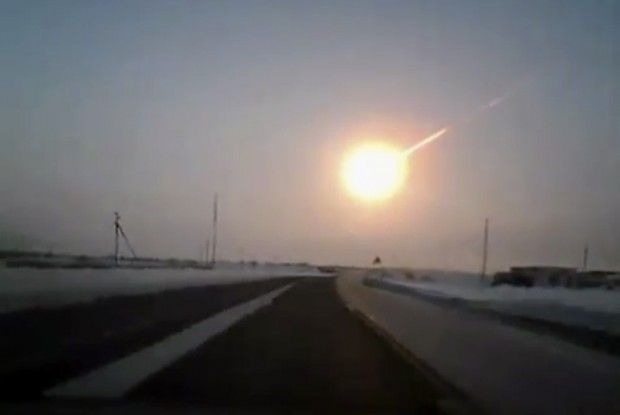 On Feb. 15, 2013, an asteroid streaked through the sky above the Chelyabinsk region in Russia. On Tuesday, a group of scientists, astronauts and other concerned citizens (including University of Nebraska-Lincoln space law professor Frans von der Dunk) will participate in Asteroid Day, a series of screenings and discussions with a goal of better preparing for the next time an asteroid enters earth's atmosphere. 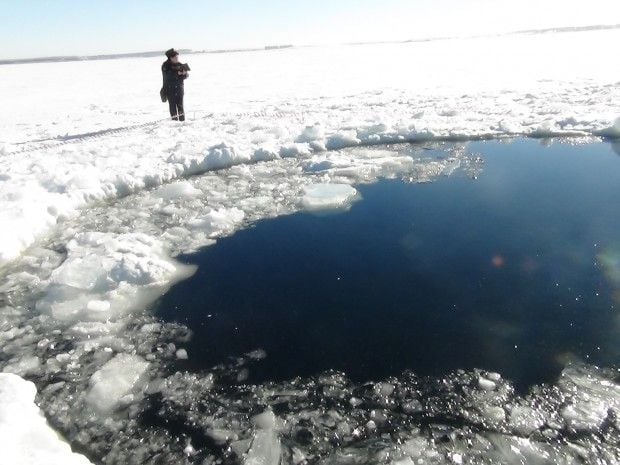 A circular hole appears in the ice of Chebarkul Lake where a meteor reportedly struck the lake near Chelyabinsk, about 1500 kilometers (930 miles) east of Moscow, Russia, on Feb. 15, 2013.

The Lincoln contingency putting on the city's Asteroid Day does not believe anyone should lose sleep for fear of an asteroid with the energy of some 30 Hiroshima bombs crashing into the city tonight.

But it’s good to be proactive, said Elsbeth Magilton, director of the University of Nebraska-Lincoln College of Space, Cyber and Telecommunications Law. And it’s good to see it coming. And it’d be better yet to be able to prevent it.

None of that happened when a blindingly bright meteor suddenly streaked across the sky above Chelyabinsk Oblast on Feb. 15, 2013. Nobody saw that coming until about the same time a bunch of cameras mounted to the dashboards of a bunch of Russian cars recorded it rocketing through the countryside.

The Chelyabinsk asteroid blew up in midair, about 14.5 miles above the Siberian city, but the power of the blast was credited with shattering thousands of windows and injuring about 1,500 people as the result of the flying glass, according to Discover magazine. Such is the power of a flying thing with the energy of 30 Hiroshima bombs.

Frans von der Dunk, a UNL space law professor, said that the asteroid’s sudden, undetected arrival in Earth’s atmosphere is a key reason why many scientists, astronauts and at least one member of Queen have joined together to promote Asteroid Day.

“With much more profound detection mechanisms it could have been anticipated, and if detected long enough, even deflected,” von der Dunk said in an email from the Netherlands. “Fortunately, of course, its damage was only relatively minor.”

Those behind Asteroid Day are seeking to get people to sign a 100x declaration, in which those who sign it call for governments and private organizations to team up in an effort to better detect near-earth objects (NEOs). Along with von der Dunk, some of the signers include Nebraska-born astronaut Clayton Anderson, Bill Nye the Science Guy, Queen co-founder (and astrophysicist) Brian May and evolutionary biologist and author Richard Dawkins.

Currently, according to asteroidday.org, scientists are tracking about 10,000 NEOs. There are roughly a million NEOs in the solar system. The declaration states that there should be a rapid acceleration in how many asteroids are being detected -- from 10,000 to 100,000 in the next 10 years.

Critics have decried the cost -- think a few billion -- and the necessity. Eric Christensen of the Catalina Sky Survey told Sky and Telescope magazine that there's nearly no chance that any asteroid will impact a populated area of the planet in our lifetime.

But Rusty Schweickart, who piloted the Apollo 9 lunar module, wrote on asteroidday.org that we have a shared responsibility to protect humanity from a potential extinction-level threat, even if there's not an asteroid among those 10,000 or so being tracked that's on a collision course for Earth.

“Well, the 'civilization killers' have all been mapped and there is no one currently threatening earth, but the country- or city-killers is where we need to upscale our efforts,” von der Dunk wrote in an email to the Journal Star. “Here the simple issue is that if we have decades of reaction time -- which we could easily achieve in principle -- we only need relatively cheap and small missions to take out the danger.

"It is if we wait too long (because we can't agree how to handle it or who should pay for it -- or of course because we did not look for it) that we might be faced with the need to take emergency measures with much more risks, both mission-wise and politically."

On Tuesday morning, von der Dunk’s face will be beamed from the Netherlands up onto the Fulldome of the Mueller Planetarium for a discussion on all matters asteroid. It’s one of about 20 events scheduled throughout the country as part of the first-ever Asteroid Day, which falls on the anniversary of the 1908 Tunguska asteroid explosion -- also in Siberia.

It's the biggest asteroid on record -- the dinosaurs kept shoddy journals -- one that's impact flung a Russian man from his front porch chair and scorched his shirt, even though, as NASA's website states, that man was sitting some 40 miles away from the blast site.

After von der Dunk speaks and takes questions, two short films, "Firefall" and "B612 Sentinel Program," will be screened on the Fulldome. "Firefall" explores the nature of cosmic collisions, including the Tunguska explosion. "B612" gets into how asteroids could potentially be deflected. Bruce Willis' "Armageddon" strategy, it turns out, isn't the first line of defense.

The event is free, though seating is limited to 80, per the Mueller Planetarium capacity. Magilton said she hopes visitors use the presentation, and Asteroid Day, as an opportunity to learn about what's in our solar system, and maybe go to asteroidday.org and sign the 100x petition.

What: Asteroid Day, featuring a discussion with space law professor Frans von der Dunk and screenings of "Firefall" and "B612 Sentinel Program"

On Feb. 15, 2013, an asteroid streaked through the sky above the Chelyabinsk region in Russia. On Tuesday, a group of scientists, astronauts and other concerned citizens (including University of Nebraska-Lincoln space law professor Frans von der Dunk) will participate in Asteroid Day, a series of screenings and discussions with a goal of better preparing for the next time an asteroid enters earth's atmosphere.

A circular hole appears in the ice of Chebarkul Lake where a meteor reportedly struck the lake near Chelyabinsk, about 1500 kilometers (930 miles) east of Moscow, Russia, on Feb. 15, 2013.